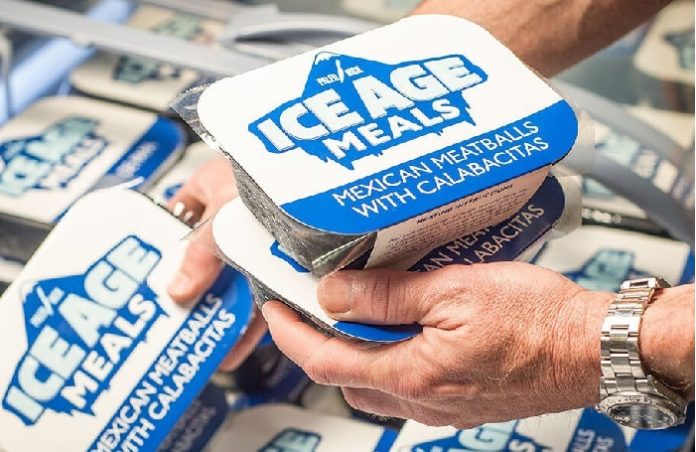 The fashion for healthy eating was one that Ice Age Meals founder Nick Massie was keen to tap into. The entrepreneurial athlete founded his company with the aim of promoting a healthier lifestyle. He utilized the Paleo-diet, a program he followed himself, but it’s a controversial subject in diet clubs around the country.

The paleo diet has been dubbed a ‘fad diet’ by some and even potentially dangerous by others, but there is a moderate body of professionals who support it as overwhelmingly healthy as long as other lifestyle factors such as regular exercise are followed with the same level of commitment. There’s no doubt that in the case of particularly active people the diet can work wonders, Nick Massie looked like he was ready to climb a mountain when he appeared in the tank, but a sudden business proposal saw him miscalculate the valuation he gave to his business and left him unprepared for the sharks, who wasted no time in bearing down to bite.

Nick Massie of Ice Age Meals woke up the sleepy sharks with a rousing cry of ‘Hello Sharks!’ and an enthusiastic whoop that Robert Herjavec joyfully and heartily echoed. Nick’s an entrepreneur with a lot of energy, he’d just done a few hundred push-ups in preparation for his segment, and he was only just warming up. Nick, from California was seeking a $1 Million dollar investment for a 10% stake in his company, where he was the ‘Chief culinary Ninja’. Lori Greiner looked surprised Nick was after a seven-figure investment but perhaps one tenth of a culinary ninja was worth more than she thought, you don’t see a lot of them on QVC.

Nick had an unconventional approach to his pitch. He treated the sharks to a poem, explaining the mission of Ice Age Meals to the sharks, but the viewer was left wondering what exactly the business did. There was lots of alluding to food and the delivery of it, and the poetic lines may have rhymed, but the exact nature of the business was still slightly mysterious. There was clearly a healthy angle to Nick’s food and lots of references to ‘The Paleo-diet’, but Mark Cuban looked as if he was ready to drop off back to sleep after his rude awakening. Nick stepped in quickly with a sample of his butternut squash lasagna, his top seller and quickly confirmed it as being created and cooked by himself.

The sharks had looked doubtful, particularly at Nick’s valuation of his company, but they were highly impressed at his culinary skills. They unanimously declared Nick’s best seller as ‘Delicious’ and agreed he was a culinary ninja, Nick confirmed he cooked all the meals and the sharks knew that at least the food was top-notch. Daymond John asked what the Paleo-Diet actually was, and Nick, who was more of an action guy than a natural speaker stumbled into his explanation of it. The enthusiastic entrepreneur explained it was comprised of meat and vegetables, nuts and seeds, some fruit, little starch and no sugar. It must be noted at this point that Nick Massie is in exceptional shape physically, he could easily have dealt with the sharks while doing one-handed push-ups with Mark Cuban on his back and he wouldn’t have been out of breath. There’s an air of competence about his cooking abilities and his knowledge of healthy eating, and it’s clear the food and the healthy quality of the ingredients were never in question among the sharks.

Mark Cuban, now fully conscious after his invigorating butternut squash lasagna is impressed by the retail price of ten dollars with a cost of less than three, and all the sharks are equally impressed after Nicks reveals that he has sales of $1.5 million after less than a year in business. Robert Herjavec gives a gentle ‘Wow’ and Mark asks for the last months sales. ‘$130,000’ confirms Nick, and the sharks understand that Nick’s business is as fit financially as he is physically. Nick is urged for more details about himself. The Ice Age Meals man went to culinary college and later got a degree in hotel management. He reveals he went on to became Lance Armstrong’s personal chef for a while, to which Mark piped up with ‘So it’s your fault?’. Nick was quick to confirm ‘No I had nothing to do with that’, but that was the only lighted-hearted moment in the tank for a while.

It emerges that Nick had only the day before been in talks with the massive organization CrossFit, the organizers of the CrossFit Games and the owners of gyms in 142 countries. He had suddenly been flown out to a meeting and couldn’t confirm to Kevin if he actually had an agreement to represent them. Robert saved him from Kevin’s further probing, but for Nick it was out of the frying pan and into the fire. The entrepreneur may have been a culinary ninja but the tank was about to strike him a few blows he couldn’t avoid, and his optimistic valuation of his business at $10 million was the part that the sharks were going to rip to shreds. He had been intending to propose a lower valuation to the sharks, but the sudden prospect of a deal with CrossFit worth million had left him unprepared for the tank, and unwilling to under-value his potentially soon-to-be booming business.

Kevin O’Leary delivered his own four line rhyming dismissal of Nick, it was shorter and snappier than Nick’s poem but far less positive. Mr Wonderful continued with ‘Are you worth ten million? Hell no’ and after a few more outbursts of incredulity at the required investment Kevin confirmed that he was most definitely out. Nick asked the other sharks to ‘believe’ in him, but Kevin’s opinion of Ice Age Meals was going to be unanimously echoed. Nick has a casual style of speaking compared to the average entrepreneur, and perhaps a business partner with a more serious business persona would have been a good companion for him in the tank, but wrong footed and making an attempt to man-bond with Robert Herjavec backfired when Mark Cuban dropped out after lots of face-palming, clearly unimpressed with Nick’s casual style.

Robert Herjavec had his own poem, ‘I love the story, love the name. But I hate the value, it’s insane’. It was the best poem yet and Robert confirmed ‘I’m out’ to the cheers of the other sharks, and even Nick cheered, impressed with the on-going poetic turn the tank was taking even if business-wise things were going badly. Daymond John made an effort at a rhyme, but poetry is not one of the fashion guru’s strengths. It was clear however that the on-coming rejection was due to Daymond’s belief that the valuation was ‘whack’, and with that there were four sharks gone.

Lori broke tradition and didn’t deliver the final blow in the form of a rhyme, but she did give a fair analysis of Nick’s less than stellar performance in the tank. She told Nick he’d come in with an increased valuation due to a potential deal that was still in the very early days of talks, and therefore none of the sharks would be prepared to make a reasonable deal. Nick clearly agreed fully, he knew that despite his casual style that Mark Cuban had objected to, all of the other sharks had been resounding positive about his amiable personality, and outstanding food, but suddenly Nick was no longer ready for a shark investment after the approach from CrossFit.

Ice Age Meals Now in 2018 – The After Shark Tank Update

The dilemma facing Nick in The Shark Tank was an unusual one, and despite his inability to offer an accurate valuation of his company without potentially giving away 10% of a company worth millions for a fraction of it’s price, the sharks were not blown away by his unprepared appearance even if I’m sure a few of them order his lasagna on a regular basis.

Since September 2016 when the Ice Age Meals segment was first aired, Nick Massie has struck up a partnership with CrossFit and he’s now bearing the badge of the Crossfit games where he’ll be operating the Paleo Nick’s Food Booth to help spread the word about his business. Nick was interviewed late in 2016 about his appearance on the show and he admitted that obviously he was caught unprepared for his segment after such a game-changing meeting the day before. He also revealed that he was profoundly jet-lagged after two flights the day before and had literally stepped off a plane before filming, which went some way to explain his occasionally over-casual behavior in the tank. Ultimately his back-up plan was to expose the healthy drive and convenience of Ice Age Meals to millions of viewers, and the enthusiastic reception to his food has clearly helped achieve that aim, and as a result his business has grown considerably in the last year.

Nick maintains a typically enthusiastic presence on various forms of social media. His positivity and enthusiasm for healthy eating comes across a lot better than it did in the tank, and there’s plenty of ways to effortlessly find yourself going from his online promotions to Iceagemeals.net, which is packed full of all sorts of content, including the 51 changes he’s made to make the business better in the 51 weeks since he had his moment of Shark Tank fame. Nick’s irrepressible enthusiasm for his work is clear to see, and there’s no doubt he loves being ‘Paleo Nick’, spreading healthy eating habits across the entire country one package at a time, with a minimum order of $120 of course. And ordering is a pleasant enough and completely streamlined process, about as easy as ordering from Domino’s online, the whole thing reeks of professionalism and competency. If you’re the sort of person who might want to try that Butternet squash lasagna that impressed the sharks so much, it’s the first dish listed, but there are quite a few other delicious looking meals just a few clicks away, and it’s the most appetizing low calorie Vegetarian selection I’ve ever seen. I have to leave now, there’s a lump of meat in my fridge I’ve suddenly got the urge to burn, and just in honor of Nick and his healthy eating inspiration, I’ll burn a carrot or two to go with it.