Angels and Tomboys before Shark Tank

In 2013, Madison and Mallory Boyd discovered that they had a passion for both fun fragrances and running a business. The two girls hadn’t entered high school yet, but they knew they were going places. They pitched the idea for their personal hygiene brand to their mother, who came up with the name Angels and Tomboys. Before appearing on Shark Tank, the two girls and their mom were able to sell $56,000 worth of product, which isn’t bad for a business operating out of a kitchen. Let’s see how they’ll handle an interrogation from the Sharks.

Angels and Tomboys on Shark Tank 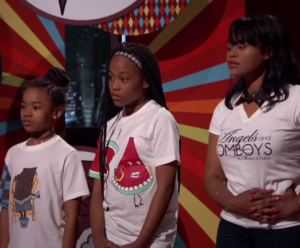 Before the presentation started, the family behind Angels and Tomboys were seen backstage praying in a circle. They asked God to help them be energetic, successful, and to not to let them mess up. As the announcer said that their product was specifically aimed at tweens, the three African-American ladies walked out onto the stage to face the Sharks. They introduced themselves as Madison, age 12, Mallory, age 10 and their mother Viera. Madison asked the Sharks for $55,000 in exchange for a 20% equity stake in their body care line company, Angels and Tomboys. Their target demographic was tween and teen girls, and it was made by the same age group. Madison said that the products had eye-catching names such as Frozen Hot Chocolate and Watermelon Funk. She stated that their motto was when you smell good, you feel good.

Madison insisted that she knew that the Sharks would enjoy their body sprays, and Mallory told them that they would also enjoy their lotions. A video started up behind them of what may have been a commercial for Angels and Tomboys, with the jingle that went “I know that you like the way that I smell.” All three of the entrepreneurs on stage began dancing along with their jingle. Robert laughed at the sight. By the end of the song, all of these Sharks were enjoying the girls’ enthusiasm. They ended their presentation by saying that all girls were created equally different.

Madison announced that they had samples for the Sharks to enjoy, and began passing them out. Robert told her that she looks so different in the video. Mallory told them that they have Candy Star Glam, Lori got the Frozen Hot Chocolate, Kevin got the Lemonade Donuts, and Daymond got the Watermelon Funk. All of the Sharks said that their scents that they were handed smelled very good. Robert asked if that was all there was to the company was body sprays. Viara let him know that they were introducing Angels and Tomboys to the market with body sprays and body lotions, but it was their intention to have a full-fledged personal hygiene company later down the line. Robert asked how much about all cost, and Madison let him know that each bottle cost $12.

Viara asked him to think about the ingredients involved in the lotion and the body spray. She let the Sharks know that all of the products were paraben free and vegan, and made with all-natural ingredients. Robert asked how much it costs to make per unit, and how they sold it. Urged by her mother, Mallory told him it cost four dollars per bottle to make, and that they sold online at as well as at tradeshows. This peaked the Shark’s interest. Daymond asked them how many they’d sold. Viara said that they sold 5000. Mark even asked him to clarify whether they sold $5000 worth, and the mother said that they actually sold 5000 units at $59,000 revenue.

This number impressed the sharks. Mark asked them if they were profitable, but Viara let them know that they were not as profitable as they could be. Kevin O’Leary asked them how anyone would know about them to purchase their products online. She outlined three different methods that they were using to market the brand, through word-of-mouth, social media, and guerilla marketing. Madison and Mallory would take the product to schools and sell it out of their backpacks.

Robert wants to know what made them think of the product. Madison said that they were always playing with their mother’s lotions, but they were too strong scented, too flowery or too expensive. She said that they wanted their own thing. There wasn’t that much out there besides Victoria’s Secret, and she said that no little girl would feel comfortable going into Victoria’s Secret. Kevin said that it was an interesting market. He wanted to know where they would optimize sales for a product aimed at ages 5 to 12. Viara mentioned Target. Kevin wanted to know what the equivalent would be, and Vieira stated that there was no equivalent but it was $1 trillion market. Kevin looked justifiably skeptical.

Viara asked him if he was familiar with the popularity of things like lip gloss with young girls. She claims that they go through the body sprays and lotions like water. Lori began gently, saying that the scents were all very good. She let them know that she wears a perfume called Sugar or Chocolate sometimes. She said that things like that smell good. She followed it up by asking if Target already had fun little bottles of scents for girls.

Mark said that you want to talk to Madison and Mallory. He asked them if they loved running the business, and they said yes. Kevin asked if they would be willing to quit school for it, and Madison told him that education was still important. Daymond asked them where they were making the product, and Madison told him that they were making it at home. Robert asked if they were packaging it at their kitchen table, and the girls said yes. He seemed impressed.

Lori asked them who was the genius that created the line “all girls are equally different.” Madison did a little curtsy with a flourish. Lori told her it was a good job, and that it was a very good marketing statement. Daymond asked where the name came from. Madison said that she was the angel and that Mallory was the tomboy. Mallory struck her chest three times and gave the Sharks the peace sign. This had Mark Cuban in stitches.

Kevin asked how they would handle an order from a retailer for hundred thousand orders since they wouldn’t be able to make it at their kitchen table.Viara said that they’ve already spoken to manufacturers. Damon asked if they’d gone over the numbers on how much it would cost to produce. She said that they had and that it would reduce the cost of making the product from four dollars to a $1.75. Robert told them that he didn’t see a market for it. He wasn’t saying that there was in the market, but he wouldn’t buy it for his kids. He wasn’t saying it was a bad product but Robert decided to go out. Viara thanked him.

Kevin said that he thought that the big risk was that there wasn’t a category for Angels and Tomboys as yet. Mark told him that that was the upside. Kevin told Mallory and Madison that they should understand that the world of business is tough. He told them it wasn’t going to be easy to create a whole new category. Viara insisted that when you put the product in front of people, they buy it. Kevin said that they hadn’t proven that yet. He said that he was looking at it pragmatically, and the amount of work that would be involved to get it into retail was too much risk for him. Kevin went out.

Lori started off by saying that she thought that their commercial was awesome. She called them superstars. Lori said that it was a very scary thing to come into the Shark Tank even for adults, and she thought it was great that they were wearing their confidence. Lori said that she knew how hard it was in business for fragrance because she’d already been there. She said it was very tough. She said that she knew of a lot of celebrities that have come out with fragrances and have not succeeded at selling them. She went out. She let them know that they’ve done a good job so far.

Daymond looked torn. Kevin said that he was contorting himself to try and turn a hobby into a business. Daymond said that he saw himself in them. He said that their hobbies started out on the same exact path as his hobby did. His hobby ended up being very profitable for him. Lori asked him if it had been better for him to not get a deal, or if it would’ve helped him out in the long run. Daymond winced and said that his biggest issue was that after the fragrances on somebody, he can’t see it. It wasn’t the same thing as a T-shirt with a logo. He said that they would have to market it dollar by dollar, or through exposure.

Daymond said that he and Mark Cuban were talking, and they were willing to go in on it together. He offered them $60,000 in exchange for one-third of the business. Mark clarified that the three of them would own 66% of the business, and the two sharks would split the third. The family discussed it for a minute before agreeing to the deal. The two girls looked thrilled. Daymond pulled them all in for a team hug before asking Mallory to do her moonwalk dance again. She complied, and Robert told her that it was really good. The three of them danced off stage. Let’s see how Angels and Tomboys did after the episode ended.

Angels and Tomboys after Shark Tank – Update in 2017 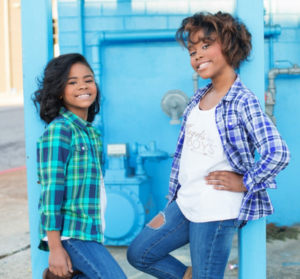 Angels and Tomboys appear to be going strong after their Shark Tank episode. Daymond was able to get them on Zulily.com, which led to a ton of new sales. They drastically reduce their prices on their website, which may mean that they got a manufacturer after all. They continue to be promoted by the Sharks on social media. According to their Twitter site, Angels and Tomboys have continued to pop up shops as well as trade shows. The teams behind Mark Cuban and Daymond John helped them to refine their social media, and work on an online store that would be able to handle the influx of orders once the episode aired.

Other opportunities that being on Shark Tank afforded the girls was being chosen as one of Amy Poelher’s Smart Girls, and being featured in a Huffington Post news story about their Shark Tank adventure. In October of 2017, Madison and Mallory co-hosted the 2017 Freedom Student Award Student Forums.