This presentation started off with the audition video. Jared Whetstone of Atlantic Candy Company introduced himself and told the camera that he was from St. Augustine Florida. The video showed several landmarks from the city – which Jared claimed was the oldest city in America. He called himself a third-generation Chocolatier. His grandparents had sold chocolate and ice cream to use one in the 1960s. Eventually, they opened the store that would turn into the chocolate factory that Jared and his father ran today.

Jared stated that the Atlantic Candy Company supplied chocolates of the biggest names in the candy industry. His aim was to start creating and marketing their own products instead of just making them for others. Jared’s father had invented and patented his own technology, and manufacturing techniques to make a candy product that would be sold all over the world. It had not yet reached the United States. Jared said that was personal for him and his family. He was invested in seeing his father succeed. His father had to stay home and work in the factory, so Jared was pitching to the Sharks alone. Jared ended the video by saying that he thought he could make his father proud in the Shark Tank today and the camera shot to a clip of Jared in his uniform biting into a piece of his own chocolate. 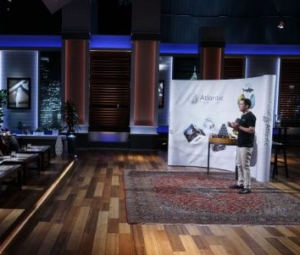 Jared strode confidently onto the stage and faced the Sharks. He addressed them as “boys and girls”, introduced himself and his company, and requested $1 million in exchange for a 10% equity stake in Atlantic Candy Company. He told them he wanted to take chocolate in a new direction – the toy aisle. He was talking about a hollow chocolate ball with a surprise toy inside. He claimed the product was already insanely popular with people, and over 2 billion are being sold in the world per year.

Jared claimed that the popularity was the excitement of it all – he said that it was like having a birthday every time you opened one. He took a deep shaky breath and said that the products have been banned in the United States since the 30s – until recently. Jared told the Sharks that his father overcame the ban, and Jared himself was a third-generation chocolatier. He took another deep breath and looked down. You could tell that the pressure was starting to get to him. Mark Cuban gently encouraged Jared to continue. He started, stopped again, and then cursed himself. Kevin looked at him in surprise, but the cursing seems to encourage him. Jared said that his father invented a safe and legal way to make the American version of a Kinder-egg. He ended the presentation by stating that they were looking for a Shark to partner with them and help take over the United States candy industry.

Kevin asked if they could see some samples. Jared went to grab the tray, and Robert passed a sample to Lori, who said that she loved chocolate in the morning. Jared passed the rest of the samples out to the Sharks. All of them said that they liked the cute packaging. As they opened the package and cracked open chocolate, Jared explained that the Atlantic Candy Company made these specifically for the Shark Tank.

The Sharks made noises of excitement as they saw the toys inside. There is a little plastic square with pictures of each of the Sharks faces on it. Jared said that there are six Sharks to collect as Kevin wondered why it had been illegal to put toys and candy. Jared explained that back in the 1930s, a company thought it had been a good idea to put metal toys and solid chocolate bars. Kids were cracking their teeth and choking on them, so any nonnutritive item in candy was banned. Robert asked how Kinder-eggs could get away with it, and Jared informed him that they did not. Kinder-eggs were banned in the United States as well. Lori said that they were sold in Germany and everywhere else.

Kevin asked why that was good news. The number one player could not get past the law, so what made Atlantic Candy Company think that they could? Jared said that his dad, Hank Whetstone, had patented the process and pointed out that the FDA bans nonnutritive items from being embedded. Since the packaging had a ridge on it, and the chocolate comes together but doesn’t touch, it wasn’t affected by the ban.

Kevin O’Leary said that was an exciting opportunity that Jared had. What Kevin really wants to know was about the financials. Jared was valuing the company at over $10 million, and Kevin wants to make sure that they had the sales to back it up. Jared informed him that the company had made $2.5 million the last year as contract manufacturers. They’d been producing products with an Australian manufacturing company on a 10 year contract and ended with 2015. Atlantic Candy Company was now free to manufacturer the chocolate with a toy in it. The main issue was that there is only two years left on the patent.

Kevin pointed out the obvious – that there would be lots of competition in 24 months. As an investor, he thought about the big cycles for chocolate, which was the holiday seasons. There were few selling cycles left before the patent ran out. He wants to know why anyone would value the company at such a high price on the patents expired soon. Robert pointed out that the other company was gone, and so is the likelihood of actually making $2.5 million in sales for this year. Jared agrees and told him that they owned a high-capacity factory with machines on order and they planned on being able to produce 100 million units of the chocolate with toys. When Mark asked why they were expanding, Jared explains that they expected that product category to really take off. They projected to get $3.5 million in sales from other contracts as well.

Mark could tell that Jared was struggling, so he laid everything out for the other Sharks. Atlantic Candy Company was into contract manufacturing but they saw this opportunity to exploit the category, and they wanted to get in on that. Mark said that the rush was an issue for him since he didn’t know how to navigate both contract manufacturing and retail. Mark went out. Jared thanked him.

Damon told Jared that the challenge for him was that retail was a completely different fields than contract manufacturing. Atlantic Candy Company had years of experience in contract manufacturing, but none in retail. Daymond also went out. Lori went out as well as, stating that she was also concerned about the patent ending. She saw that there was only a handful of months left.

Jared gulped as Robert spoke next. Robert gently let him know that they would have to order about a year ahead for Christmas, which drastically cut their patent time. He said that Jared would need a salesforce and a game plan and Atlantic Candy Company did not have either. Robert went out. Kevin told him that it was good that they had the factory already, but building the rest of the infrastructure would cost a lot of time and money. Kevin apologized and went out. The Sharks wished him luck, and Jared walked offstage. He told the camera in the after interview that it was a disaster, and his plan just went to pieces once he went on stage.

Atlantic Candy Company Now in 2018- The After Shark Tank Update 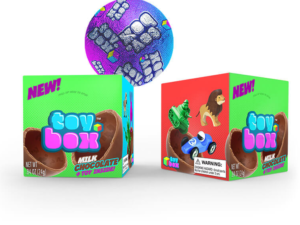 On June 14, 2016, Australian company Yowie filed a lawsuit against Atlantic Candy Company. While the Australian company was under contract with Atlantic for their patented hollow ball filled with the tollway, they were also in negotiations with Madeleine Chocolate Novelties Inc. in order to make similar products and expand in the United States. Yowie alleged that Hank Whetstone, Jared’s father, interfered with that deal and made several other claims. Hank filed a counterclaim against the Yowie contracts breach, alleging that Atlantic Candy Company had suffered tens of millions of dollars of loss. Ouch. That makes the lack of the deal on the Shark Tank look tiny in comparison.

Because of the lawsuit, Atlantic Candy Company has been unable to produce their confectionery idea, which they dubbed the Toy Box. Their episode aired over a year ago and they’ve not been able to exploit the patent as they wanted to. According to their website, Toy Box is still coming to a store near you. If you are interested in being updated on the release of the Toy Box, you can join their newsletter by clicking here.