When Jack Bonnoneu was just 8 years old, he was inspired to start his own business. There was an expensive Lego said that he had his heart set on, and he could only have it if he used his own money to buy it. That led him to start a lemonade stand. But Jack didn’t want to start just any lemonade stand on a street corner. He learns that you would be able to sell lemonade at farmers markets and craft shows, and everyone wanted to buy from a cute little 8-year-old boy. This expanded into teaching other kids how to run stands on their own. Before appearing on Shark Tank, he was able to earn over $150,000 between both ventures. Let’s see if the Sharks are impressed enough to invest in Jack’s Stands and Marketplaces. 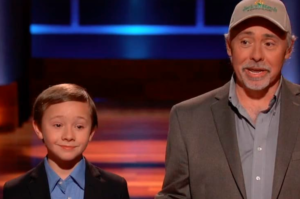 A 10-year-old boy and his father walked out onto the stage and into the Shark Tank. They faced the Sharks, and the boy he introduced himself as Jack, the CEO and founder of Jack’s Stands and Marketplaces. The business was founded in Denver Colorado. The father also introduced himself and said that he worked for Jack. Jack informed the Sharks that he was seeking $500,000 in exchange for a 10% equity stake in his company. Jack began his presentation by telling the Sharks that when he was 8 years old, he wanted a Star Wars themed Lego set that cost $400. His father said that he could buy the set, but only if he could raise the money himself.

This filled Jack with a determination. He started a lemonade stand in a farmers market. After 12 weeks of work, Jack was able to make $900 in profit after taking away the expenses need to run the stand. He was able to purchase his Death Star Lego set and save some money. Lori was impressed. Jack told the Sharks that this was why he decided to create Jack’s Stands and Marketplaces. It was aimed at teaching kids to have an entrepreneurial spirit, and also teach them about business and financial literacy. Jack said that the second goal was to have fun and make money doing it. Barbara had a good laugh at Jack’s earnestness. Jack continued, stating that they provided everything except for the kids’ motivation. One of the Sharks as Jack if it was just an opportunity for kids to sell lemonade and other drinks. Jack said that it was much more than that. They were able to sell all sorts of products, and include the stories about how they had gotten started on this business path.

This was not your typical lemonade stand. They finished the presentation of Jack’s dad asking the Sharks who wants to make some money. Mark even asked Jack to tell him a little bit more about the business. Jack told him that he currently operates 7 stands where other kids were managing the location. Jack would teach them about customer service and how to restock the location. Mark asked if it was all in Colorado, and Jack confirmed that it was. Lori asked where they were located in Colorado, and Jack explained that they were in farmers markets and crafters markets, as well as having 2 locations in the mall. Kevin asked how much they paid in rent for the mall locations. He wants to know what the revenue was per month. Jack’s father cut in to explain that the stands cost 15% of their profit in rent. They had made $15,000 in 3 months for both stands.

Jack told the Sharks that they were projecting opening another 3 stands by the end of the year and that their total sales projection was $150,000 for the year. Mark congratulated them. $50,000 of that was coming from Jack’s stand alone, and the remainder was coming from the marketplaces. Jack told the Sharks that they are projected to do $1 million in sales the next year, which got a big laugh from the Sharks. I’m not sure that that was what his intentions were.

Mark asked him how he kept track of his numbers, and Jack explains that each day they do a mini profit and loss statement with each kids sales, losses, and tips. Lori asked Jack’s dad what he was doing for Jack. Jack’s dad said that he was behind Jack 100%. Jack’s dad had had his own company in the past, but Jack’s Stands and Marketplaces was both more successful and a bonding experience for the 2 of them. He was able to work with his son. Mark asked Jack if he wanted to set up his daughter Alyssa with one in a local mall what the process would look like. Jack’s father said that Jack would come to teach her how to run the stand, and provide her with everything that she needed. The kids get between 10 and 15% of all the sales.

Kevin wanted to get serious now since $50,000 was not a small amount of money. He said that he loved the story and he loved the entrepreneurs, but he wanted them to be full-time when he invested on in them. He didn’t want Jack to drop out of school for this. He wanted Jack to finish his education, and then come back to him for an investment. He said, for now, he was out. Jack took a heavy sigh. Chris asked him where he got the money to start the business. Jack told him that he had initially borrowed $1000 from his parents in order to get the 1st stands, the supplies, and then the working capital. He had since paid his parents back. He’s also gotten other loans from a Young Americans Bank in Colorado that catered specifically to children. The loan he got from them was $5000. Chris asked Jack if they had paid back the $5000, and Jack said that they were 60% paid back with a monthly payment of $250.

Mark said that Jack was incredible. He said that one of the reasons that he does the Shark Tank is to inspire kids just like Jack to become entrepreneurs. He said that he started his 1st company when he was 10 years old, but he saw the challenges. He thought that millions of kids would want to do the same thing, and he didn’t see Jack being able to support that amount of people at this moment. Mark said that they had taken the steps necessary to prove that they can handle people that were out of Denver Colorado. Mark decided to go out, even though he applauded Jack and his efforts.

Barbara said that she thought that the marketplace was the wrong step for Jack’s Stands and Marketplaces. She thought the lemonade stands should be easier, and cheaper. Adding other products complicates everything 100 fold. Barbara decided to go out. She said that Jack did a phenomenal job at the Shark Tank, and he was truly an inspiration.

Lori told Jack that he was amazing, and she couldn’t believe that he was so articulate and businesslike at just 8 years old. Lori said that she thought that Jack’s grow the business very slowly since he was in school. She wanted him to concentrate on his education. She was wished him the best, but she was out. Jack’s nodded and looked sad. Chris Sacca said that there is no way that he was going to let the best pitch of the year get out of the Shark Tank without a deal. He knew that Jack was already handling some debt at $250 a month. Chris offered Jack a $50,000 loan at 2% percent interest. The contingency was that Jack had to borrow $10,000 at a time. Once that was paid off, they would assess the business and how it was going, and then he would be allowed to draw down another $10,000. Jack took a minute to discuss this with his father, and they ended up accepting the deal. Let’s see how this father-son team does once they get out of the Shark Tank. 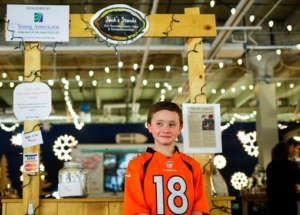 Since appearing on the Shark Tank, Jack of Jack’s Stands and Marketplaces has spoken to students at various schools in the Monroe school district. He offered them words of encouragement and advice in regards to starting their own businesses. Now 11, Jack has spoken to more than 1600 students in order to tell them how to thrive in the marketplace. He told them that they can achieve anything with an inquisitive mind, something they are passionate about, and a bit of optimism. He shared his story of going from his 1st lemonade stand to appearing on Shark Tank and the today show. Jack was even able to donate $500 to each of the 4 schools that he visited. True to his deal with Chris, it seems like Jack is taking the time out to speak to students outside of his hometown of Denver Colorado. Check out his website here.