Dave Cohen has spent his life since getting Ph D.s in biochemistry and biophysics making various medical devices. His latest venture is the Sunscreenr, which lets you view where sunscreen is soaked into your skin. This protects from both weird sun burns, and skin cancer, as you would be able to but the lotion on all the spots you missed. Prior to launching his successful Kickstarter campaign, Dave was approached by several large sunscreen companies to talk about potentially licensing agreements. Would the Sharks bite on the Sunscreenr device as well? 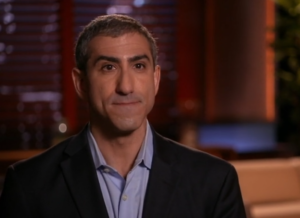 Dave Cohen walked out onto the stage, and faced the Sharks. He was wearing An ill-fitting suit and looked nervous. He greeted the Sharks, and introduced himself. He stated that he was the founder and CEO of the company Sunscreenr,, which was based out of North Carolina.He requested an investment of $800,000 in exchange for a 10% equity stake in his company. The Sharks all seemed shocked at the high valuation.

Dave started off his presentation by telling the Sharks that people spend about $1.3 billion on sunscreen per year, even so, there are still over 3 million cases of skin cancer that appear each year. He stated that our best protection against the UV rays is sunscreen, but it’s impossible to see it working. Of course, Dave claimed that his invention would solve the problem. He said that the Sunscreenr made the invisible visible. He said that it used technology that was previously used only for scientists. The device illuminates places on your skin where sunscreen appears.

Dave referred to a video screen that was on a table behind them. On it showed the regular view of a person and an example of someone looking through the Sunscreenr lenses. He said that the Sunscreenr showed protected areas of your skin as dark, while places, where you didn’t put the lotion, were regular colored. It allowed you to see the spots where sand or sweat have worn away the lotion on your skin. It would allow you to monitor your child’s level of protection as well as your own.

Dave invited Lori up on the stage to try out the Sunscreenr device. He handed her some sunglasses and said that there is a UV light on the stage that would simulate the sun. He held her hand under the camera with the sunscreen and had her put lotion on. Everyone could see that the place where she put the lotion on was darker. Dave asked who else want to try, and demon immediately got up and said that they should try it on the black man. It was an interesting point. Would it turn his skin even darker?

Daymond got up and picked up the sunscreen. He rubbed it on his hand, and you could still see the place where it went on. It ended up turning part of his hand white. “I’m a white man now!” Daymond exclaimed. Robert laughed, but Dave just looked uncomfortable. Daymond went back to his seat. Dave says that the Sunscreenr was set up to only show you the UV light. He claimed that it throughout the infrared and other forms of light to only show you the UV. Lori interrupted his presentation to say that in the video he initially showed them it was very clear to see the results, whereas when they went up there it was a little bit more grainy. Dave explains that that was the video that they used for their Kickstarter campaign, and point out that it was shot outside where there was much more UV light.

Robert asked how his Kickstarter campaign was going. Dave told them that in five weeks they raised $93,000. Kevin asked what his goal was. Dave let him know that it was $45,000. Robert asked if they were going to be shipping the finished product, but Dave said that they weren’t shipping until December of that year. Daymond made a disappointed sound. Dave started to hand out samples of the prototype.

Lori examined what she was given. The device was very small. She asked if it was supposed to be used like a monocle that was specifically looking for sunscreen on your body or your child’s body. Dave said that it was. He explained that he had a PH in biochemistry and biophysics, and had spent most of his life creating medical devices he also made devices for forensic use, and for the military. Kevin let them know that he was credible. Kevin wanted to know why he was valuing the business at $8 million the day of the Shark Tank filming

Dave said that he was valuing his business so high because in the five weeks since he launched on Kickstarter, he had already sold 1200 of those devices. Daymond held his head in his hands. All of the Sharks started talking over each other, and Lori let him know that 1200 was not a huge number. David said that he was selling at a rate that would equal to 1 million a year. Mark told him that he couldn’t do that. That was theoretical, and they want to deal with actual numbers. Lori said that he already knew that because he was brilliant. Dave appeared to smile sheepishly.

Kevin asked how much he would be selling them for it. Dave said that the list price on Kickstarter was $109. Lori gasped. Dave let the Sharks know that in the lowest quantity, it costs $45 per unit to make. Robert wanted to know who told him to value the business at $8 million. Kevin said that they were all struggling with evaluation. Dave told them that before he launched their Kickstarter, he got attention from five different sunscreen companies, two of which were multi-million-dollar industries. Lori wants to know in what capacity they wanted the Sunscreenr. Would it be a licensing deal, or would they be selling the product with their sunscreen. Dave let her know that they were in very early discussions with all of the companies, and were waiting for a decision from the shark tank before moving forward.

Mark asked how long the perfect application of sunscreen would last at a typical beach day with his three kids. Dave told him every 30 minutes if you really want to be safe. Mark pointed out that you would only use the Sunscreenr if you’re diligent. Mark didn’t think anyone would do that. Dave let them know it was as simple as turning it on and checking your child when they got out of the water. The Sunscreenr didn’t work like a microscope, it was a wide-angle view. Mark said that he thought that Dave had sold himself on the value of it so much that he lost context and self-awareness of how the business side of it needs to be run. Mark went out.

Robert said that he also did not buy the premise that people would check every 30 minutes, and he wanted Dave to have validated that before making that claim. He said that his Ph.D. made him a credible scientist, but when he came to the shark tank with an $8 million valuation he was showing a lack of common sense. Robert pointed out that Dave did not have a Ph.D. in customer retention or sales. He wanted him to have a Ph.D. in something besides his own hype. Robert went out.

Kevin was up next. He said that he would offer Dave the $800,000 in exchange for 33 1/3% equity stake. He understood the risks of the business, but he also saw the inherent benefit and the sunscreen are. Daymond said that the valuation was still way too much and he couldn’t sell a kidney in order to be part of the company. Daymond went out. Dave looked disappointed but thanked Daymond.

Lori went up next. She told Dave that if he had come into the Shark Tank with a reasonable valuation, she would’ve given him an offer without even thinking of it. Dave asked her what a reasonable valuation would be. He wants to know what would make sense to her given her experience. Lori didn’t answer, instead asking him to give her an offer that she would want to hear. Dave asked her if she would give him $100,000 in exchange for 20% equity in the business. Lori said that she would not accept that. Kevin pointed out that he already had an offer on the table.

Kevin pointed out that he had offered $800,000 in exchange for 33 1/3%. Dave asked Lori if she was going to counter back. Lori appeared to consider, but she stated that she could not see a good reason for the consumer to buy the products. Lori went out. Dave asked Kevin if he would go down to 25% equity instead. Kevin said no. He reminded Dave that it was the only offer that he had on the table, and he wasn’t willing to negotiate. Kevin asked Dave what he was going to do. Dave appeared to consider, took a deep breath, and said that they had a deal. The two shook hands and then hugged. Daymond wished him luck. In his after presentation interview, he indicated that he did not want to lose the chance to have a Shark as part of their team.

Sunscreenr Now in 2018 – The After Shark Tank Update 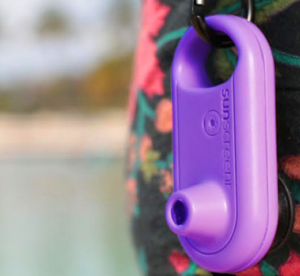 Sunscreenr has a depressing 2.9-star rating on their business Facebook page.Apparently, they were unable to make their December deadline for Kickstarter shipping and extended it until summer of 2017. Their last update on 10/30/17 stated that the user experience of the device had improved, and they would keep their backers updated with a firm ship date. They ended their campaign with $119,629, but are only angering their backers, and making potential customers wary. If the comments on Kickstarter are anything to go by, they are also failing to respond to their customer’s messages. Their website doesn’t mention it being a Shark Tank product, so it’s possible that one or both parties backed out of the deal.