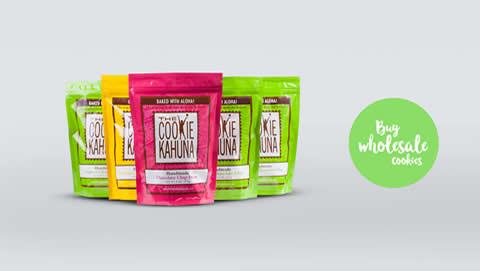 Stepping into the Shark Tank is no ordinary man. Rather, he is a legendary man, and one with the past of cookies. Aloha, Sharks, Wally Amos greets the Sharks. His new company is The Cookie Kahuna, and Wally has come from Honolulu, Hawaii, to ask for $50,000 in exchange for 20% of his company. Wally has been selling cookies for 40 years, and for a long time, he thought he was actually selling cookies. But he wasn’t selling cookies, he was selling happiness. Kevin looks bored out of his mind. None of the Sharks are smiling, Wally points out. “This guy in the middle,” Mr. Wonderful, looks anything but wonderful.

Wally then says that he has something that can make them smile – as Wally walks away, the five Sharks have to argue amongst themselves. Is this THE Wally Amos, of Famous Amos cookies? Indeed, it is! Wally returns with a kazoo and a cart full of sample cookies for the Sharks. The entire tank of Sharks burst out laughing. Wally passes out trays of cookies to each Shark, complimentary with a glass of milk. All of the Sharks joke that Wally is a legend, but he won’t get the money that easily.

All of the Sharks enjoy their cookie, which is said to be a bit lighter and crunchier than other cookies. Wally then explains that he is the Amos behind Famous Amos, which started over 40 years ago. He is indeed a cookie legend.

With Wally in the presence, he explains that he started a new company called The Cookie Kahuna. He is no longer affiliated with the original company, Famous Amos. He came to cookies from show business, he explains to Robert. He was the first African American Asian who performed with numerous names, like Marvin Gaye. In 1970, Wally started to make cookies to share with friends and have cookies whenever he wanted to. Soon enough, the cookies went all over the world.

What went wrong is that Wally is a damn good promoter, but not a business guy. His focus was not on how much money he could make, but rather, he just wanted to have a good time. The company went through 5 different owners over a period of time. By the time Wally got there, he had been diluted and had no equity. Famous Amos uses Wally’s picture on the box, as well as the name Amos. The company owns the name right-out, which means Wally does not receive any equities.

He started The Cookie Kahuna a little over a year and a half ago, and primarily sells online and through Costco. However, he only sells cookies in Hawaii at Costco. Robert then asks how much the cookies cost to make and what they are sold for, and Wally pulls out his piece of paper. Costco buys a 1-pound bag for $7.89, and it costs $5.25 to make that bag – $4.20 for ingredients. Sales for the last year were $36,215.97 in the current year. Robert then reaches out to look over the numbers, but Wally jokes that he should not ask any questions.

Robert then explains the margin, once you take in packaging and shipping and handling, is less than 20%. This is bad for the food business. This is simply not enough margin to sustain a business. Costs have to go lower, and the numbers tell Robert that packaging and shipping costs are well over 40% of the whole cost. This does not include the baked goods. Kevin says this is worse than what he thought.

Barbara then explains that while Wally has been through a lot, why would he start all over again? Simply because Wally loves cookies, and he thinks he can build a business out of the cookie and replicate what he did with Famous Amos years ago. One thing that Wally brings is such a huge brand associated with the food category, but they do not have the full access to the image and name. This has all the challenges associated with launching a new brand, which means that it is not investable. At least, not for Kevin. Kevin is the first Shark out of the deal.

Lori then says that she is the product person and has been in the arena for 18 years. She has worked with a lot of entrepreneurs, and one of the hardest conversations she ever has to have is if the entrepreneur finds that something isn’t working. If something isn’t working, go to something else. She is sure that because Wally has that spirit, and is such a promoter, that there are other things that Wally can be doing with as much passion. Because of this struggle, Lori is the second Shark out. 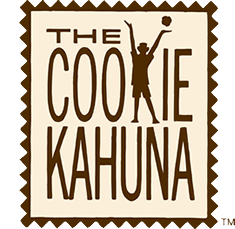 Robert admits that while people love the cookie, it’s more important to love the business than love the product. The costs are too high and he has limited distribution, so Robert is the third Shark out. Barbara then says that she has the same story as Wally – she got a lucky break. She was in business for 10 years, and took an unfortunate turn on the market. Just when she thought she might go out of business, Merrill-Lynch came in and offered Barbara $50,000. They wanted her to sign away her brand, but also sign away her name and likeness. $50,000 was the equivalent of having God himself come down and kiss her. At the 11th hour, they changed their mind and did not buy it. That same business was sold for $66 million only 15 years later – this was incredibly lucky for Barbara that they changed their mind.

Wally then says that the universe is filled with surprises. However, things really went awry when Wally sold the business and his personality. Without the personality, the business has very little value. Barbara then passes with great respect, being the fourth Shark out and leaving only Mark Cuban. Mark says that Wally is a legend and has taught him a lot. Mark would like for nothing more than to make an offer, but unfortunately, he’s already in the cookie business. It would be a conflict of interest, so Mark is the fifth and last Shark out of the deal.

All of the Sharks say Aloha and goodbye to Wally, sad to see a cookie legend walk away without receiving a deal. Unfortunately, the Sharks could just not make it work. Wally, however, knows that this is just another step in his journey. He is determined to make The Cookie Kahuna more famous than Famous Amos.

After Wally exits, Mark explains the story of Wally. Business was great, and Wally was one of the first high-end cookies to be distributed in grocery stores. That brought him competition, and business started to decline. Wally then went out and got an investor, and told the investor that the money would fix it. Every time he would lose the cash, he would go out and find more equity. This eventually diluted his equity down to nothing.

Robert then admits that he idolizes Wally’s drive and determination – how many of the Sharks would still be here at age 80? Kevin jokes that Robert looks great for 80. 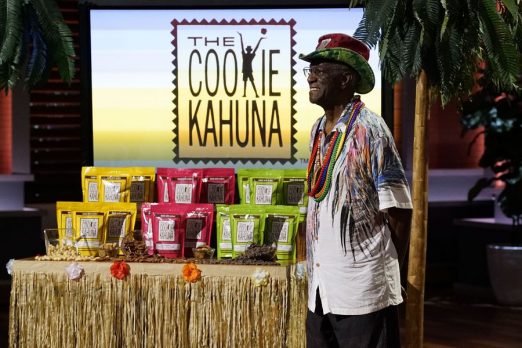 Fortunately for Wally and cookie-enthusiasts all over the world, The Cookie Kahuna is still in operation. Cookies are available for $5.99 for 6 oz, and you can even buy cookies to resell at wholesale prices. A lot of the cookies are actually out of stock, which could prove well for Wally Amos. The cookies themselves are hard to find any information on, but it appears that they’re just like the Famous Amos cookies – small and bite-sized, with just the right amount of crunch. Unfortunately, distribution of The Cookie Kahuna is still limited, and it can only be found on the Hawaiian Islands at Costco stores.

If Wally Amos lucks out, Costco will be one of the first nationwide distributors to sign up and distribute The Cookie Kahuna all throughout the United States, and hopefully the world. I know I would love to try some of The Cookie Kahuna, after being a vehement Famous Amos fan myself.