PDX Pet Design company and their various toys might seem strange, but they get results. Before appearing on the Shark Tank, they ran a successful Kickstarter campaign for their SHRU cat toy, an interactive toy designed to mimic small animals movements so that cats will chase it, and be entertained while their owners were gone. Their initial goal had been $15,000, and the campaign ended at an impressive $170,000 – more than 10x their original ask. Let’s see if PDX Pet Design will be as successful with the Sharks. 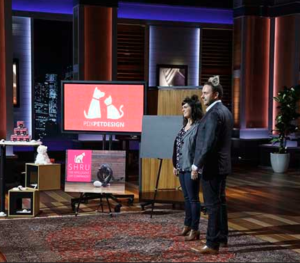 Tara and Jason walked out onto the stage and into the Shark Tank wearing fuzzy dog ears. They introduced themselves as the founders of PDX Pet Design. They asked the Sharks for $300,000 in exchange for a 15% equity stake in their business. Tara explained that she and Jason were of the generation that grew up online, and they met online as well. She told the Sharks that they eventually got married, and, as comes naturally, they adopted more cats.

Jason stated that there is a problem with cat toys. As they were now, they are cute, colorful, and cats love them. For about 5 minutes anyway. He said that the toys were basically throw away is as they were now. Tara asked the Sharks to imagine walking into a pet store and finding an entire aisle dedicated to cat toys that would allow you to improve your relationship with your cat while enhancing your cat’s lifestyle. She insisted that that’s what they were doing at PDX Pet Design.

Tara and Jason invented what they called SHRU, which was shaped like an egg. They described it as an intelligently designed cat toy. Tara said that it was made to entertain your cat while you were out for the day. They designed the toy to mimic a small animals motion and claims that it would be a cat owner’s new BFF. They designed their next toy with the idea that grooming is a form of Social bonding for cats. They had also read the study that said that cats assume that you’re just a big cat and not a different animal. Tara asked the Sharks why they should be left out of their intimate bonding ritual.

That’s why they developed the LICKI Brush. Tara described it as a tongue-shaped brush that you can use to finally lick your cat the way they lick you. Jason brought out a black and white cat to demonstrate the product on. Tara brought the product to her lips, and Kevin begged her not to stick it in her mouth. Tara ignored him and went up to the cat to lick it. All 5 of the Sharks began groaning. The cat didn’t seem to mind Robert told them that they must be joking, and Tara said that they weren’t. She asked them who want to help them improve kitty lives around the world.

All of the Sharks were laughing hysterically. Mark Cuban’s said that someone needs to hand them a mic for them to drop right now. Robert stated that it was horrible. Tara bravely soldiered on and told the Sharks that she was going to give them each a cat, an SHRU, and a LICKI brush for them to try it out. Lori said that she wanted a cat. Kevin asked him what their cat’s name was. Jason told him it was Chestnut, and Kevin commented that Chestnut must now be psychologically disturbed.

Jason started handing out stuffed animal cats, as well as the 2 toys that PDX pet design had invented. Daymond asked him what had gone wrong in his life to make him this way. Jason claims that the LICKI brush had been a viral hit, and Mark Cuban said that he bet it had been. Robert held his brush in his hands and said that he wants to try it with the real cat. Tara handed Chestnut to Robert and explained how to use the device. He held her nice and tight and licked with the grain of the hair. Tara complimented him on his technique.

Robert handed the cat back to Tara and said that he hated himself so much right now. Jason began to get defensive, and stated that many people had tried the products, and claimed that it was a wonderful bonding experience with their pets. Mark and Robert continue to play around with the different toys, while Lori asked what the difference was between just brushing the cat, and using the brush with your mouth. Kevin said that he really wanted to start taking the business seriously since before they started licking their cat they asked for $300,000 in an investment. Mark even pointed out that they didn’t know what their sales were like yet.

Kevin asked what their sales were. Tara answered that they had sold $250,000 worth of SHRU, and $52,000 worth of LICKI brush. Tara said that they had 5 other designs under development, and she thought that they would all be equally as viral. She said that she knew how to talk on the Internet to people about their cats. Mark even want to know what they did before they got into lickety-split as he called it. Jason said that he was an electrical engineer by trade.

Tara told the Sharks that Jason did all of the engineerings of both of the toys that they had made so far. PDX Pet Designs did not have to outsource any of the engineering components. Tara also said that she handled the business management side of things. She appealed to Kevin O’Leary, stating that she had gone to the University of Waterloo. She said that she then went on to explore a Ph.D. in neuroscience. Kevin asked her if she was a Canadian, and she said that she was. Kevin stated that he would make sure that they threw her out of the country.

Robert asked her if any of them had asked what the products sold for. Tara stated that they did not. She said that the SHRU cost $119 retail. The Sharks all seem surprised, but she explained that it had a computer inside of it, and it was able to be reconfigured. She continued, stating that the LICKI brush currently sold for $19, in its final MSRP would be $25. The sharks were happier with those numbers. Kevin wants to know what the sales forecast would be for the year between the licker and the egg. Tara said that their projected sales for the current year would be $180,000.

Kevin wants to know what made them think that they could price the business at $2 million in valuation. Tara tried to say that they were focused on future revenues, but she couldn’t continue amid the Sharks laughter. Daymond said that they would be able to finance PDX Pet Design 5 years from now in the future. Tara said that he could, but she would be looking for a lot more money because she knew that they would double their revenue every year. Daymond said that he never heard anyone say, “I promise we’re going to fail.” Every business that went on the Shark Tank thought that they were going to be successful.

Kevin said that the idea was too crazy. Jason tried to say that the minute the episode aired to the whole thing would go viral. Lori said that she wanted to explain something important to them. Lori said that everyone says that they want to go viral. Jason said that they did and that their views on that one video were 20 million. Lori stated that their sales did not reflect the popularity of their video. She said that she thought that the sale should be higher. Lori went out. Robert was the next to go out, stating that the sales just weren’t there.

Daymond said that he wished that they hadn’t asked for so much so soon. All they had was just a little proof of concept. He didn’t think that he was going to be able to get around that number, but the fact that he was agonizing over it meant that he was kind of interested. Kevin stated that everyone was having the same problem. He was thinking of the future, where he went back into his office and met with his team after investing $300,000 in the LICKI brush. He saw his employees rushing to leave the company after that happened. The other Sharks laughed, but you could see that the entrepreneurs were getting discouraged.

Kevin said that he thought it would be impossible to get the $300,000 that he had put in back. Mark cut in, stating that he got it. He said that the entrepreneurs had made it their business as well as part of their personality. They came onto the Shark Tank hoping for their big break. Mark said that the problem was that they didn’t price it as if they were coming on for their big break. He said that it would be different if they’d come in asking for $50,000 in exchange for 20%, and all of them would grow together. He said that then someone could take a risk on them. Mark was out, citing that $300,000 was just too much. 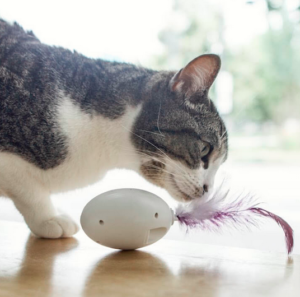 Since their appearance on the Shark Tank, PDX Pet Design has come out with a glow in the dark LICKI brush. That particular product, which the Sharks found so amusing, was recently featured in the Huffington Post’s Weird Christmas List. While they have not yet launched the new products that they spoke of on the Tank, it has not been long since the episode aired. It may not be investable, but with Tara’s energy, PDX Pet Design is sure to go places.