Mylen Yamamoto is from Honolulu, Hawaii. She is a fourth-generation Japanese American, and her grandfather fought in World War II. Her father has worked for Hawaii’s Department of Education for over 40 years, and it’s because of him that she became a teacher. She has been teaching university entrepreneurship classes for the past seven years. It’s one thing to teach entrepreneurship and another to actually be an entrepreneur. It was on a flight to Asia that she had a certain problem that she was sure that thousands of others have also experienced.

That’s when she came up with an idea to innovate a product that hasn’t changed in over 4,000 years. It’s scary to leave a steady income, a place that she’s known for seven years, and to go out and risk everything. But, it’s important to prove both to herself and her students that she can make her business a success. This is her big moment; she has been teaching entrepreneurship for so long that it’s time to walk the walk and put her lessons to practice.

With that said, Mylen is carried into the Shark Tank (wearing a traditional Japanese kimono) by her husband. The Sharks all immediately sit up as Mylen is set down. Mylen asks if the Sharks can see the “handsome sushi man” over there, so excuse her for taking any chance to be carried. Plus, the slippers she’s wearing are really hard to walk in. Konnichiwa, Sharks! Mylen is the inventor of CropSticks, and today she is seeking $75,000 in exchange for 12.5% of the company.

CropSticks is reinventing the Hashi. Mylen asks the Sharks to join her in saying the word one more time, “Hashi!” The word Hashi actually means chopsticks in Japanese. Robert immediately sits up and goes, “Oh!” as if his attention is grabbed. Chopsticks are traditionally paired with a hashi-oki. Again, Mylen asks them to repeat the term “hashi-oki.” However, in modern days, it’s very expensive for restaurants to maintain the rest, leaving chopsticks to lay alone on dirty, germy tables.

Chopsticks have been around for more than 4,000 years, and that’s because the ancient utensil is simply amazing. But they’re not without faults; for example, the chopsticks in her bun are circular in shape and when placed on the table, tend to roll off. The other chopsticks in her bun are made of wood, killing millions of trees every single year for a product that is simply thrown away. She throws the chopsticks to her husband, who catches them with an empathetic grunt. When you split the chopsticks apart, you can get splinters. However, CropSticks solves all the problems.

CropSticks is the first-ever disposable chopstick with a built-in rest. Simply snap it apart horizontally, and the top becomes a rest. Try to do with this traditional chopsticks – it’s impossible. Mylen’s husband gives a great show of trying to split the chopsticks apart. CropSticks are made out of bamboo. Simply put, CropSticks are the chopsticks but reinvented. 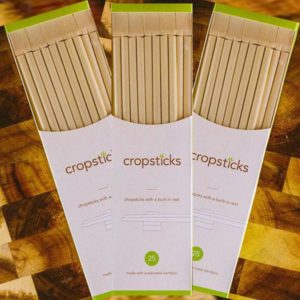 With her speech and introduction out of the way, Mylen motions to her husband to start passing out samples of CropSticks to each Shark, along with a small tray of sushi (oddly enough, she pronounces the plural of sushi as “sushies” – perhaps the way it’s meant to be done?) Mylen takes the opportunity to change into something more modern. All of the Sharks are given exclusive meals made specifically for them. Mylen reappears, and the true Shark Tank drama can begin.

Lori points out that the end broke off easily and has a little scoop-out section. So, she can just lay it down, and it’s very clever. However, Lori asks about sales, but Daymond says “no, no, no, don’t go there yet.” Mylen starts by saying that CropSticks had a Kickstarter in March of 2016, so they sold 21,800 units off that. Right now, they have conditional purchase orders for another 190,000, and that means $125,000 in profit. The profit margin is about 65%. The Sharks are all surprised by this.

Robert asks who their purchased order is from, and Mylen says that they have two – one is from a Hyatt hotel chain, and the other is from a large Asian distribution company. Daymond asks if she has a patent, and currently they have a provisional patent. Daymond falls silent and makes a note of this. Robert then asks Mylen about her background, and she says that she started by getting her Masters degree in Communication. Her first teaching job was as an English teacher in Japan. After that, Loyola Marymount found her and hired her on to teach entrepreneurship.
The Sharks all find that cool, although Mylen says that she stepped down from the position to actually be an entrepreneur. Kevin wants to return to the business for a moment, as he was involved in a deal that made bamboo knives and forks. What he found out was that the restaurant will not pay ⅛ of 1 cent more for a bamboo spoon. They couldn’t give a flying *beep.* So, if you’re a restaurant chain, you typically buy those from the distributor and care about every cent you pay. Robert asks what the cost of CropSticks are versus other sticks, and Mylen replies that two CropSticks cost 10 cents and are sold to distributors for 6 cents. They make each one for 2.2 cents.

Robert asks what a restaurant today pays for them. Mylen says that things all depend; a middle-tier restaurant, like a P.F. Chang’s, pays about 3 to 8 cents for chopsticks. Your high-tier market, like Nobu, pays anywhere from 8 cents to as much as 17 cents. Kevin is firm that she will not sell them for that price. However, this is CropSticks’s marketing strategy, Mylen says. Middle-tier, high-tier market – sell to them first, scale up, bring the costs down, then go to Panda Express. 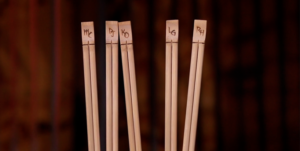 Lori asks if she has a distribution company that is begging to take CropSticks to different places? Not yet, Mylen replies. Lori asks, why not? Mylen says that they are still relationship-developing, especially the one that bought into them already. They want to get the logistics right on that first, but Kevin interrupts. Nobody cares about branding in chopsticks, and nobody will say “Make sure my Chopsticks are CropSticks.” This is all performed at the distributor level. If she had came out there and said, “we’re going to price these things at the lowest price to get distribution and everyone that buys chopsticks will only have one alternative – buy the old ones at six cents, or buy my new ones at six cents and mine is better,” then Kevin would have found that this entire business makes sense. She is going in a different direction that he does not think will work, and he even says that she reminds him of Bambi in the bamboo jungle and she’s about to get squashed. Kevin is the first Shark to exit out of the deal.

Mark speaks up next, congratulating Mylen first. She’s actually gone from academia to implementation, but it still feels a little bit like a class project. He thinks that she is being overly-optimistic, and there’s a bit of realism that’s missing. Mark is the next Shark to exit the deal. Daymond says that he likes the product, but he sees this working only in a business to business channel, which she is currently doing. It’s a little too early for him to find the opportunity to invest, so Daymond is the third Shark out of the deal. 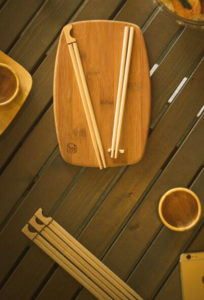 Mylen addresses being Bambi in the bamboo forest, as she has had less than $20 in her bank account. She knows what it’s like to be strategic and make something out of nothing. Robert speaks next, saying that he doesn’t believe that she is like a Bambi in the jungle. He admires the fact that she left a safe environment in school and actually started a business. With that said, Kevin is right. If you can’t sell it for the same price, it’s a commodity. She will have a very challenging time adding value to a commodity. So, Robert is the fourth Shark out of the deal, leaving just Lori.

Lori starts by saying that like Robert, she does not see Mylen as a Bambi at all. She sees Mylen as a strong, smart woman. She actually thinks that Mylen has built a better mousetrap, and it’s clever (the saying goes “build a better mousetrap and the world will be at your door”). But, she doesn’t see it as a business for her. She does hope that CropSticks blows up for Mylen, and is the last and fifth Shark to exit the deal. With no Sharks remaining, Mylen does not receive an offer in her business. Both her and her husband exit the Shark Tank, a little more solemn than they were coming in.

CropSticks are going to be in a very interesting place for the duration of the business’s lifespan. Their products are just niche enough to not be sustainable by selling to the consumer, but yet businesses won’t want to entertain the thought of switching simply because of the bottom line. With that out of the way, I do unfortunately believe that Mylen and CropSticks will eventually succumb to reality and go under. But for the time being, CropSticks are still alive and active.

Their prices start at $11.99 for a 3-pack of CropSticks, which contains 5 individual meal’s worth of CropSticks. These are sold at an advertised price of 50% off, with your lowest price bundle pack (a 3 pack) costing $29.99. The price includes shipping at the $12 price point. A 6 (30 sets) pack runs $19.97, and a 10 (50 sets) pack runs $29.97. There is also a Crop made Full Circle Sustainable Planter Bundle. This includes a bamboo plant that you can mount on a wall, which is to pay homage to the fact that CropSticks are made from bamboo. Bamboo is actually an incredibly resilient plant and incredibly important in its native ecosystems. You can also order custom laser-engraved CropSticks, although these are much more expensive than their non-customized counterparts.

While the business may not have been a success on Shark Tank, the clientele listed on the website begs to differ. Their partners include Roy’s Pacific Rim Cuisine, which is an upscale American restaurant that specializes in Hawaiian and Japanese cuisine with an emphasis on sushi. Also included are Marriott hotels (many of the more upscale hotels include fine dining), Walgreen’s, StripSteak Steakhouse (in Las Vegas), Far Bar, and the big one, Disney.