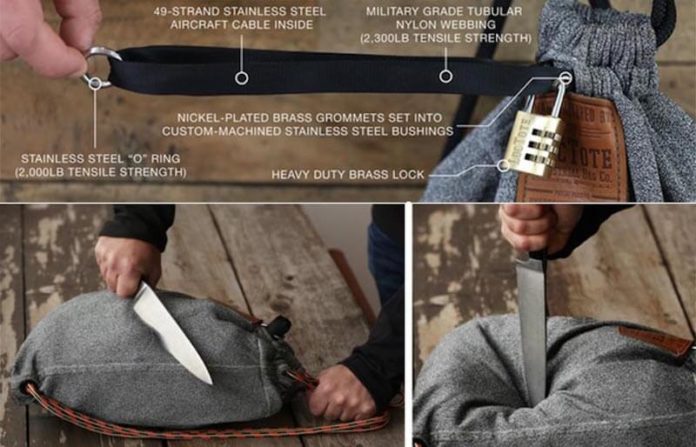 Stepping into the Shark Tank are two entrepreneurs, with an innovative way to keep your belongings safe. Meet Adam McBride and Don Halpern, both from Columbus, Ohio. The two are seeking $150,000 in exchange for a 5% equity stake in their business, Loctote Industrial Bag Company. They are changing the way people carry and look after their stuff. Everyone carries expensive and hard-to-replace items every day; items like cell phones, keys, cards, cash, and a whole lot more. But the reality is, the moment you set them down or turn your back on them, too often are they stolen. Now, thieves can even scan your credit card data by simply walking past you.

Now, your things can be safe. Thanks to the Flack Sack, which is a ridiculously tough and resilient bag. It is made out of the most slash-resistant textile available anywhere. And, Don demonstrates, with the hidden steel-reinforced strap, you can lock the bag closed and to any fixed object. Don locks the bag on a rack, alongside several other bags. The Flak Sack is water-resistant, UV resistant, and of course, it blocks RFID scanning.

Everyone has used your typical drawstring backpack before. Adam demonstrates how easy it is for a thief to slash right through it, taking a knife and cutting through it. Sand falls out, and Adam demonstrates the same knife on the Flak Sack. You can slash it all day long, in, out, whatever direction, but you’re not getting in. The two created a product that everybody, at some point in their life, wishes they had. Then, they went and created the type of business that every investor, at some point in their life, wishes they owned. With that, they came here today to bag some Sharks! Which Shark wants in? 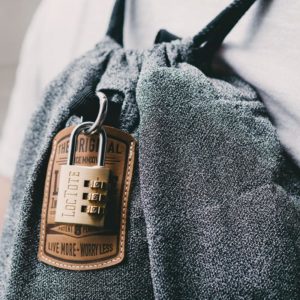 Robert is immediately interested and begs for a free sample. Don hands out samples to each of the Sharks, while Adam explains that they are also getting real box cutters. Adam encourages them to try and slash the Flak Sacks and see the product for themselves. He also discourages the audience from trying it at home. Adam wants them to compare them to a typical drawstring bag. Kevin pulls the Loctote bag and tries to cut it, and is impressed that he cannot. Robert asks what the bag is made of – is it kevlar? Don says that’s funny since everyone immediately guesses kevlar – the material is actually five times more cut-resistant.

Daymond asks why someone wouldn’t take the whole bag, and Don explains that the bag can be locked on any fixed surface. Daymond is curious how many people would literally lock it at the airport or a sidewalk cafe. That’s a paranoid person all around. Lori says that this isn’t true since she sells a product that looks like a bracelet but you can open it and put it in your purse handle. Then you put it on the chair or around the supermarket cart handle, and it sells really well.

Robert and Kevin ask for the price of the bag at the same time, which Adam says is $179. The Sharks are all exasperated at the price. Mark asks what each bag costs to make, and Don starts by saying that the fabric is proprietary and very expensive for them to order. Daymond asks if it is mink, and Kevin jokes that it is steel mink. He also asks for the cost to produce each bag. Don explains that the cost of the bag they see there today, manufactured in the United States with that fabric, is $75. This was a problem for them since their U.S. manufacturer couldn’t scale. They took on a strategic partner, moved production overseas, and managed to cut the cost of the bag in half. They started getting more requests from mass-market and retailers for a product that could fit in the largest retailer in the world. 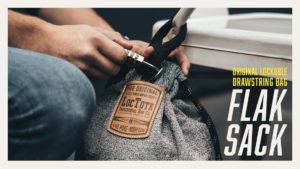 Daymond, a savvy entrepreneur, immediately identifies that retailer as Walmart. He then asks if Walmart asked for a version that was $49 or $19.99. Walmart wanted to put the product on the shelf for $39, which Kevin laughs at. The fabric isn’t expensive, Lori clarifies. The costs have been lowered down to below than $15 for the product. He actually has a prototype, but at the same time he volunteers to show the prototype, Robert asks for sales. Adam focuses on the sales, saying that they started on Kickstarter eight months ago where their goal was to raise $18,000 to start manufacturing. They raised over $855,000 instead.

Kevin screams out, “how is that freaking possible!?” The Sharks each launch into their own line of questioning, leading to mass chaos and confusion in the Shark Tank. Daymond starts to ask a question, but Don finally retrieves the prototype bag. This is the prototype for their mass market bag. Returning to the Kickstarter, after they successfully raised $855,000, they started an Indiegogo on the same day that the Kickstarter concluded. Within 60 days of launching the product, they raised over $1 million. Again, the Sharks are exasperated.

Fast-forwarding to today, their sales are at $1.4 million excluding the investments from Kickstarter and Indiegogo. Robert takes a step back and asks about the backgrounds of both Adam and Don. Don’s background is in management consulting. He has an MBA from Ohio State, and he found Adam through an OSU job board. Adam was working a corporate cubicle internship and got a call from Don. Don said that he was launching a new product and needed help with social media, marketing, and website development. Don showed Adam the product and he was blown away. However, Don could not promise Adam a full-time job after college and couldn’t pay him much. In fact, he would even have to clean the bathroom. Adam is currently working his way towards equity.

The Sharks can’t believe that Adam doesn’t have any equity yet. Kevin asks Don what’s the matter with him since he didn’t “give the kid any equity.” Robert says that he still does not understand the fundamental application of the Flak Sack. He does not think that people in a casual environment, like going out to a cafe, will lock up their bag. Don says that since starting the company, he has found that there are two tiers. Originally, the business was about the bag not being stolen. But half of their sales were overseas, and they sold to 75 different companies. It’s more about the carrying and the slashing.

Daymond says that $175 or $100, the hanger appeal is not there for stores. He does not know what it is, and it is hard to translate the product into practical use. In fact, he did not know that the slashing problem was out there. If you’re going to places where people are slashing things like that, you don’t need a bag, you need a desert eagle pistol. Daymond does not see the application, so he is out of the deal first. Robert asks how Don intends to sell the product, and Don says that they started by selling it online. They can create content and videos and slash them with samurai swords and run over them to generate interest. 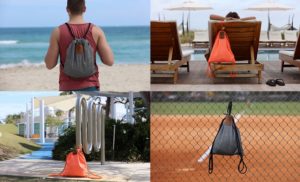 Mark then speaks up, saying that the challenge is that they have not identified how they will sell it. He gets that they can create content, but he does not see how this model scales at all. How does he get people to the website? That is far different from Kickstarter and Indiegogo. With all these challenges, Mark is the second Shark out of the deal.

Robert says that he likes kickboxing and in a dinner with Georges St. Pierre, the UFC fighter, he asked if he could get in the ring and fight. Georges said that “everyone has a game plan until they get hit in the face.” They have not been proven by the reality of the marketplace yet. Robert is the third Shark out of the deal.

Lori and Kevin still have yet to make a deal. Lori says that the unique thing about the bags is the fact you cannot slash it. The bad news is that she is not sure how many people are actually slashing locks. However, you can buy a device like hers and lock any bag. There is a lot of good news and bad news going on, but the worst news is the price point at the moment. Lori is the fourth Shark to exit the deal. Kevin is the last one standing.

Kevin says that after eight years in the Shark Tank, they have seen everything. They know what works and what doesn’t work. In fact, he thinks that they should not go to Walmart since they are kicking it out of the park. Kevin is not interested in negotiating, so he extends an offer of $150,000 in exchange for 10%. However, he wants $10 a bag until he recoups $450,000. In the end, Adam and Don find a last-minute deal with Robert. Their terms include a $150,000 cash investment in exchange for 10%, with Robert reclaiming $10 per bag until he recovers $450,000.

With Robert’s investment, as well as just an appearance on Shark Tank, sales have exploded for the Loctote Industrial Bag series. The Flack Sack is still their one primary item, although different designs have been created. The Flak Sack still sells for $149, although it is discounted down to $129 at the time of writing. The Flak Sack Sport is a slimmer profile version, which is sold at $99. The Flack Sack Coalition boasts an impressive 1.5 times the capacity of the regular Flak Sack and is available starting at $149. These come in different designs and patterns, although they are denoted with a tag that indicates what type of Flak Sack it is.

Flak Sack does not seem to be available in any major retailers, although I did find that it was available on Amazon. It retails for $149 on Amazon, but it has a stellar 4.6-star review across more than 60 different reviews. Loctote Bag Co does offer military discounts, has started an ambassador program, and offers custom and corporate sales for large purchase orders. Loctote seems to be redefining the game of portability and security.