John Staff and Pete Davis started out their Shark Tank presentation with their audition video. They were in the beautiful Catskills of upstate New York and introduced themselves as the cofounders of Getaway. The two entrepreneurs met in college, and they both came to the big city from different small towns. They said that as our society became more technological, more and more people were looking for an escape hatch to truly relax and unwind.

They insisted that the solution was right around everyone – the great outdoors. The business model was having people rent out a tiny house in the woods. The tiny houses that are used were just like regular houses with windows and doors, and a bathroom in the shower but shrunken. It was a fancier camping experience, complete with s’mores, a campfire, and a good book.

The video switched to a scene of John and Pete in their office. John was talking on the phone to a potential investor, saying that they were looking to scale Getaway from a cool idea to a national brand. They were looking to provide the ability for people to really get out into the woods and recharge. They ended the presentation by saying that they wanted to make sure that they could offer that opportunity to as many people as they could. 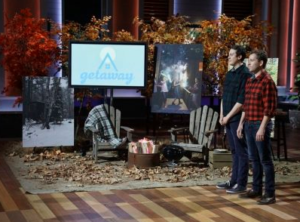 John and Pete walked into the tank to face the Sharks. They introduced themselves as the co-founders of Getaway. The entrepreneurs requested $500,000 in exchange for 5% equity in the business. They said that the Sharks of all people should understand the need for carving time out to get away and recharge. They stated that Getaway was offering hardworking Americans with a luxurious getaway into the wilderness. Pete claimed that they created the perfect way to escape.

John set the scene for the Sharks. He had them picture feeling stressed at work and wanting to schedule a short weekend away. They could visit the website, take their pick from 10 tiny houses, and get texted a code and a map of their Getaway location. There was a beautiful tiny house in the woods was waiting to take all their work stress away. John ended the pitch by telling the Sharks that they were trying to get Getaways nationwide.

Kevin wanted to get down to business right away. He inquired about their business model, asking if they leased the land. John said that they did. They designed and built the tiny houses, and put them on big patches of land. Barbara wants to know if patrons could see each other through the trees. Jake told her that each tiny house cabin was far enough away from another one to give customers an illusion of privacy. Lori said that it sounded too creepy for her, and wondered how safe that actually was. Pete told her that it was very safe – there was actually a caretaker that was fairly close in the event of emergencies.

Mark asked them how their costs were. He said their cost had to be great since building a house would cost less than building a standard hotel would cost. John and Pete said that each tiny house cost $30,000 to build which was about a quarter of what one hotel would. John said that the houses pay themselves back in about 18 months which was a rate that was coming down. John said that they got the same daily rate as a hotel night but at twice the margin.

Mark said that the issue was really the utilization rate. Each house could only be used by one person each night. He also said that depending on where they are in the country, they weren’t going to rent them every day. Pete said that they were at almost 100% occupancy with their cabins. Mark asked how many that they had, and Pete admitted that they only had 10 cabins. Mark let them know that that’s why it was so easy to put people in them.

Chris inquired what they want to do with the money, and he answered that they want to try and make Getaway a national brand. The investment money would mean that they could expand to the West Coast. Chris had a follow-up question – had they raised capital already? John stated that they had. Getaway raised $1.2 million in seed capital at a $7 million valuation. When the Sharks express surprise, John said that he wants to explain how they got to that valuation since it was much less than what they were asking for in the Tank.

John stated that they had already raised money previously, and they were actively fundraising now. He stated that all the other venture capitalists are coming in at a $12 million-$15 million pre-money valuation. He said that they are coming into the Shark Tank with a lower valuation because they thought the Sharks were worth the discount. Barbara looked annoyed and sarcastically expressed her gratitude. Kevin ignored the comment and asked what the revenue assumptions looked like for the year. John stated that they would get a 60% margin on the pre-cash flow amount of $300,000. Next year they were approximating the revenue at $2.1 million.

Mark asked the entrepreneurs behind Getaway where they saw themselves in five years. John stated that they wanted Getaway to be in 30 different cities by the end of five years. Mark asked how much it costs to run a city. He saw the that the costs could be considerable if the snow and other elements would depreciate the assets. John stated that they depreciate them over 10 years. Kevin said that that was too long, stating that 7 years would be more reasonable. He saw the valuation as being a huge deal since no one wants to see the business as worth $10 million. Kevin decided to make them an offer of a loan of $500,000 for three years at 11% interest. He also wanted 2.5% equity.

Before the entrepreneurs had a chance to answer, Barbara went out. The bottom line made no sense to her. Mark said that the problem for him was scale. There have to keep throwing money at the business in terms of new houses and repairs. Mark would be forced to keep investing in order to keep the equity. It was too much for him and he went out. Lori stated that the safety factor worried her, and she herself would prefer to be on vacation somewhere warm. She also went out, pointing out that they still had an offer on the table from Kevin.

Kevin told them that they better respond soon because of Chris Sacca goes out, all bets are off. Peter addressed Chris and told him that investing in Getaway could be his amends for bringing Twitter into the world. He saw the business as a counterbalance to technology. Chris asked them how fixed they were on their valuation. He said that he was giving the entrepreneurs a chance to make him a fresh offer. Kevin said that it all boiled down to how much of their company they were willing to give away. If they conceded and gave the Sharks a discount, they would have to explain that to their current investors. John said that they were meeting with real venture capitalists and discussing a higher valuation. Chris wondered what that made him if they were talking to real VCs.

Chris made a good point, asking them what they were doing on Shark Tank if they could just get a better deal elsewhere. John told him that they were looking for a good partner, and they really want a Shark on their side. Pete told them that if 5% is too little equity, they could go to 10% in exchange for $1 million. Chris pointed out that that was just the same valuation for more money.

Mark told the pair that Kevin was making the better offer. Taking on investors at an equity stake would dilute the valuation to nothing eventually. Chris was getting uncomfortable that they didn’t jump on Kevin’s deal. It made him think that they didn’t believe in their own value. When John seemed confused, Chris said that since they hadn’t responded to Kevin he worried about the deal that he was about to do.

Citing boredom, Kevin told the entrepreneurs that they had 10 seconds to either accept or deny the offer. Chris stated that he would come in at the previous investor’s valuation – the $500,000 in exchange for a $7 million valuation. Kevin went out. Mark Cuban attempted to convince Chris not to do the deal. He said that is the capital-intensive business, and negotiation over equity would need to be done every time that he invested more. Chris said that he was still interested in the business, and want to be some part of something that may be worth $3 billion in the future.

Barbara asked Chris what he was going to do. Since it was just him left, Chris asked the entrepreneurs to sweeten the deal. John wondered if Chris would be willing to go in at a straight seven million-dollar valuation. Chris retorted that he wanted 7.14% of the total company after the other investors took part of it. Mark stated that the other VCs would never agree to those terms. John and Pete went to talk among themselves, and they ultimately decided that they couldn’t take the offer. Let’s see how they do without an investment from the Sharks. 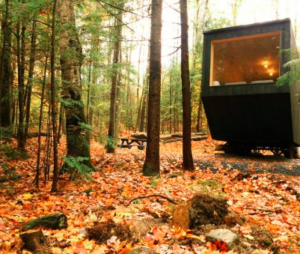 Even though they ended up not taking the deal from Chris, the entrepreneurs behind Getaway still experienced the Shark Tank effect. Their website views skyrocketed after their episode aired and they also got more reservations than usual. Since the Shark Tank appearance, they have expanded into the suburbs of Washington DC. Getaway also added more tiny cabins to dinner in New York and Boston locations. Instead of just 10 cabins, they now have almost 80. They plan on expanding to 30 different cities by 2022. That’s a pretty ambitious five-year plan, but if they get stressed by it, they definitely have a place to get away.