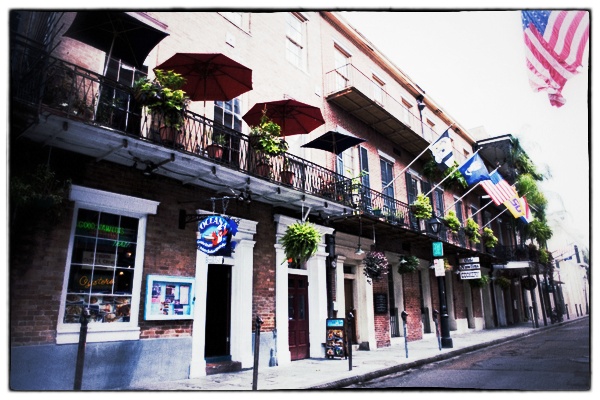 Located right on one of the best streets in the United States, Bourbon Street in New Orleans, Louisiana, Oceana is run by a pair of brothers Moe and Rommy. Founded by their father, but taken over in 2008, this restaurant is based on Creole/Cajun cooking, but in recent years it appears the only specialty they have had is in disasters. Before Chef Ramsay arrives at Oceana, it’s clear the place is filthy with a rat problem, the owners are outright abusing the staff, and the food shows the lack of effort put in the establishment. What’s very disturbing is Moe has a bad habit of mocking the head chef, and no problems about the rats being around. Can Chef Ramsay get these brothers out of their own rear ends and Oceana back up to a functional restaurant before they close for good? Let’s find out.

As Chef Ramsay comes into the kitchen, both Rommy and Moe greet him. While he is being seated, he notices that the building he walked into and the one that is the seating area proper appear to be constructed differently, which is the case as an extension was done not long after the brothers took over Oceana. Gordon then asks to see the menu, which is filled with photos of people who have been fired, and even the waitress who appears to be incredibly friendly has been fired no less than 4 times which shows a big problem with management. Ramsay then orders a crab cake platter, some gumbo, and some blackened duck. When brought to him, the Gumbo looks and tastes terrible and old. When brought back to the kitchen, both the head chef and the owners think he is insane and knows nothing about Cajun food. When presented with the crab cakes, they are soggy and were clearly previously frozen. Last up is the duck, which looks a mess, and in plain terms looks to be something out of this world. In terms of taste, it was like the bottom of the shoe, and the texture is like leather. Moe is clearly delusional, as he believes the duck is amazing. Rommy walks out to meet Chef Gordon as the rest of the kitchen staff are laughing at Ramsay (primarily lame British jokes) to explain that they think it’s all a joke. Gordon then asks for the chefs to come talk to him. 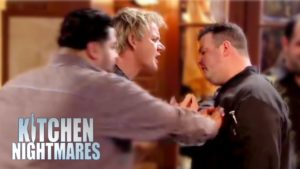 As soon as they appear, Chef Ramsay digs into the staff, and Rommy switches sides (which makes Moe later threaten him) to admit that the crab cakes are indeed frozen. It’s then revealed there are so few customers that they think they need to freeze the cakes, though this could likewise be solved by making smaller batches. The duck is an even worse offender, as no one but Moe knows when it was cooked, and as it turns out there’s a good reason for that. The Duck is typically cooked off premises, once a month. After that, it’s frozen and then reheated. At this point, the head chef gets into Ramsay’s face and looks the part of a fool doing so. Both Moe and Rommy push him back to ensure that the head chef isn’t torn apart and they don’t lose out on any help. After this, Ramsay puts on his jacket and leaves, claiming he cannot help liars.

That night, Chef Ramsay drops in again to look at the dinner service and is met with smoke as the oyster grill is covered with oil before being fired up. This is just one of plenty of bad practices that are making dishes return to the kitchen at a rapid rate, which only shows the head chef’s ego is too big. While this is going on, Chef Ramsay inspects the cabinets, and as you’d expect, they are in disgusting shape. The heating units are at room temperature, which is causing the shellfish to go rotten and at one point makes Chef Ramsay outright puke. The head chef gets aggressive and argumentative to try and defend himself, which makes Ramsay really bring the chef to the irons. The owners are flabbergasted by the condition of the food, only for Ramsay to then find three dead mice in a trap near the kitchen. This is enough to call it for the night, as Chef Ramsay shuts Oceana down for the night.

After the closure, exterminators are called in to handle the rat problem as the rest of the crew gets to cleaning. It’s evident that a solid cleaning has never been done in Oceana before. Moe loses his mind over this as he blames Rommy over the kitchen despite it being both their faults. He then goes on a tirade and destroys part of the dining room. The brothers then decide they need to fire Chef Damien, the head chef.

The next day, Ramsay sees a clean restaurant and is informed of Chef Damien’s firing, which is seen as a good sign. What is a bad sign is there are no paper recipes. Moe has become even more deluded and threatens Ramsay when confronted. Ramsay calls him out and brings him in by the chain. He then goes into the kitchen and shows the staff how cooking is really done. He also forces the owners to agree to make massive changes and Moe decides to shut up and cooperate.

Over the night, Chef Ramsay’s team redoes Oceana to make it more elegant and spacious. Next up is the new menu, which looks both authentic and elegant. The relaunch starts, admittedly with 3 of Ramsay’s own chefs to help the original team, which seems to be a great success. There’s a few hiccups revolving around Moe’s inability to speak “British” and continues to be a problem throughout until he leaves in the middle of the relaunch. This astounds Ramsay, but the rest of the staff handles the issues without a problem, and the customers are absolutely loving the results. At the end of service, Moe and Ramsay have words as he’s clearly ungrateful and didn’t work nearly as hard as Rommy. At the end, Chef Ramsay is unsure if Oceana will remain, but we can be sure now as we look at where Oceana is in 2017. 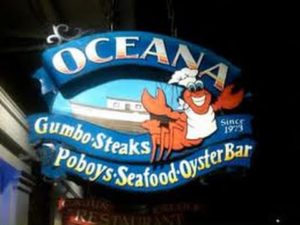 It would appear that as of 2017, Oceana is still going strong, though not with the people that were seen on Kitchen Nightmares. New owners and mostly new staff have taken over after a short stint where continued reports of abuse towards customers had occurred. In an effort to try and clear the board so to speak, the owners offered a free drink for a 5-star rating event for quite some time, which explains the huge number of reviews as compared to most other places at 3158. That being said, the 4-star rating has now kept pretty consistent, so it appears the tactic worked to create a critical mass of positive opinion, and the new service and owners did the rest. Most people find the Creole food to be spot on and the Gator Bites and Crab Cakes are by far the most popular dishes on offer. They also have a decent media presence on Facebook, and their own website, oceanagrill.com. It would seem that the nightmare for this kitchen is over, and a good dream has been ongoing for quite some time.