Under the Weather Pods on Shark Tank – 2018 Update 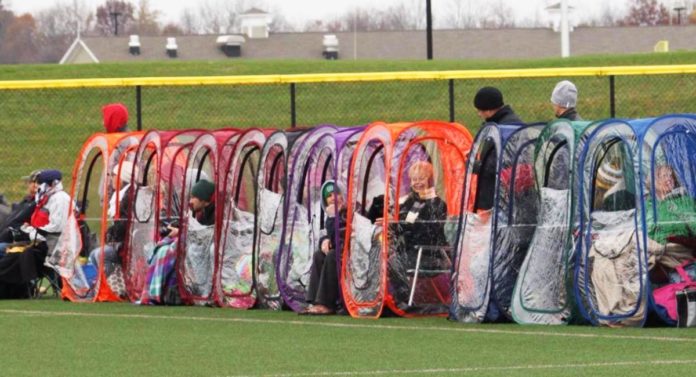 Under the Weather Before Shark Tank

Stepping into the Shark Tank is an entrepreneur with a product that can ensure you are covered, no matter where you go. Meet Rick Pescovitz, from Cincinnati, Ohio. He is the inventor and owner of Under the Weather and has come to the Shark Tank to seek an investment of $600,000 in exchange for 10% interest in his business. Under the Weather has revolutionized the outdoor spectator experience. Have you ever frozen your butt off, been poured on in the rain, or even pelted by hail while watching an outdoor event? Rick has, and let him tell you – it sucks. Mother Nature can be a bear.

You think you’re safe in the summertime? You also bake in the heat with those rays of the sun. It’s boiling out, and it’s frustrating. After 15 years of the stuff, Rick has had enough. That’s when he invented the Under the Weather Sports Pod. He shows them just how easy it is to pop open. Each pod weighs less than seven pounds and is completely portable. The pods look like little plastic pods with fabric on the sides to prevent any gross weather, as well as a clear plastic on three of the four sides. The Sports Pod is water and windproof and is also treated with a coating that prevents the harmful rays of the sun getting you. You will not miss your son’s goal if he has one, no matter where he is on the field. 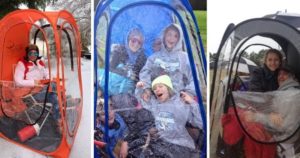 Lastly, there is also the connecting versions. These are the “MyPods,” which connect by a plastic attachment. There are windows and doors that go up. For example, Rick’s wife yells a lot at the games, so he can zip it up. Rick then flicks the television on to show some images of the product in action, and sure enough, there is a line of pods sitting on the side of the baseball field. Robert says that it looks ridiculous, but it works. In fact, it is 35 degrees warmer in the pod than it is outside. So, which of the Sharks would like to get in a bubble and help their sales to double?

Under the Weather on Shark Tank

Rick starts by saying that he would love to see if a couple of Sharks would like to give it a try. Daymond, Mark, and Lori all stand up and rush over to try it. Mark comments that Lori is from the windy city, so he’s curious to see if she can manage to tip it over. Mark is curious about the weight though, and if it actually will tip over. Daymond and Lori sit in the pod while Rick zips them up. Lori jokes that she feels like the pod people, and Daymond even yells out of the screen, “It’s like a confessional!”

Right on time, the fake rain starts again, and Daymond and Lori are safe from the rain. Daymond laughs as the realization hits him – he is totally secure and dry in the Under the Weather Sports Pod, while his kids would be running around in the crappy weather and getting exercise. Robert remarks that the two Sharks look like they’re in jail. Daymond says that it was comfortable, but Lori says that it was a little hard to see through the plastic. However, the inside is great. Mark jokes if there is a bathroom in there.

Kevin, as laser-focused as ever, asks how he is selling the units, where he is selling them the sales forecast, and how much he wants to sell. Rick starts by saying that 85% of sales have been online. One unit costs $99.99 at retail, and they produce a unit for $23 which includes shipping. This is about a 75% margin. Daymond asks for the sales, and Rick says that they did about $2 million in the last year. They netted about a million dollars in profit. The Sharks clap for him, and Kevin calls him a millionaire. Rick shys away from this and says that he has to put all the money back in. 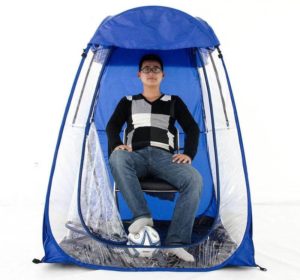 Lori asks if he has a patent on the Under the Weather, which Rick says that he does. They have a utility patent pending on the adjoining ones and the general shape. They also have nine design patents on the product. Kevin asks about Rick’s background, and he says that he started a company that did embroidered apparel and promotional items. At the height of the business, they were doing about $8 million a year. He hated what he did and hated the business. He sold it in 2012 for $3.5 million. At this point, Rick starts to tear up a bit. His brother was a partner, and the words only get harder.

His brother, with three kids and a marriage, was broadsided by a semi outside of Detroit in 2010. The day before that, and Rick still has the e-mail (since he’s known in his family to come up with some “crazy-ass ideas”), he sent an e-mail to Mark about his idea for Under the Weather. His brother said that he was onto something this time. He was gone, but Lori believes that Mark knows what he has done. Lori speaks for all of the Sharks in that they are all so sorry, but all of them believe that his brother would be proud.

Robert agrees, and that Rick has done his brother proud. He asks Rick what made him become an entrepreneur, and Rick says that he gets to wear what he wants to every day. He doesn’t like to sit behind a desk, and he loves money. Daymond says that sounds like all of them. Kevin asks about Rick’s inventory management system, which Rick says is in his head. Mark then asks to clarify – how many units did he sell in the past year? Rick sold around 220,000, which adds up to the $1 million profit.

Daymond says that even though Rick is asking for $600,000 for 10%, he does not sound like he needs the money. Rick explains that he is a salesman and a product guy, and he wants expertise on worldwide distribution. There are 70 million soccer parents just in the USA, and his wife, who has been in marketing for a while, thinks they should be in retail. There are definitely knock-off brands out there. Basically, Rick wants a partner for all these aspects because he’s the only one making a decision on retail, pricing, and a whole lot more. 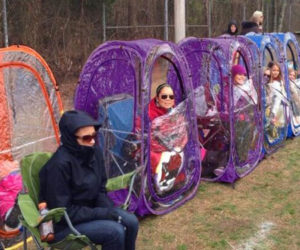 Daymond intends to make an offer, and he would love to do the deal but thinks that Rick needs to keep online to himself and licenses retail to somebody else. Let them deal with all the headaches so Rick keeps all the margin and cranking the goods. Let them also deal with the warehousing, on-boarding, and all that stuff. Robert asks who he would license to, and Daymond dryly replies, “a person named none of your business.” Daymond offers the $600,000, but in exchange for 20% ownership in the company.

Kevin makes the exact same offer of $600,000 for 20%. This was on his mind before Daymond started making noise. He thinks that Rick needs an inventory system and accounting. Robert speaks up, saying that he thinks Rick doesn’t need help as he is killing it. He has the same problem that Robert’s company was his size – he wants to do everything, but he can’t. He has to let some of the knock-off brands go and be more efficient than then. He believes that Rick can get there without the investment. Robert is the first Shark out.

Lori and Mark still have yet to propose offers to Rick, but Robert urges Rick to take the offers quickly. Rick came here to make a partnership today. He asks Mark if he is interested, and Mark definitely is. Mark asks if he is doing any type of SEO or advertising, and Rick says that they just started. They have only invested $500 in the last month, so everything is completely word-of-mouth. Under the Weather has spent $11,000 on advertising in the past two years, which is a very small amount.

Mark extends an offer of $600,000 in exchange for 15% ownership. But, Mark wants an option to buy another $600,000 for another 10%. It will take a lot of work and effort on his part. In the end, Rick agrees to take the deal with Mark Cuban, almost without hesitation. Mark is certain that the two of them can make a lot of money together.

Under the Weather After Shark Tank – 2018  Update

Since appearing on Shark Tank, Under the Weather has really taken off. Now, many different types of pods are available in different colors and sizes. These include the new additions of the XLDeluxePod, the MiniPod, the CamoXLPod, and a whole lot more. The original pod still sells at $99.99, which has a stunning 5-star review across 31 different reviews. The MiniPod, which is more aimed towards children (and perhaps really short people, like myself?) costs $69.99 (but is on sale for $59.99 at the time of writing.) The XLDeluxePod sells for $140, which is a much larger size of the pod that offers large and tall people an extra bit of comfort.