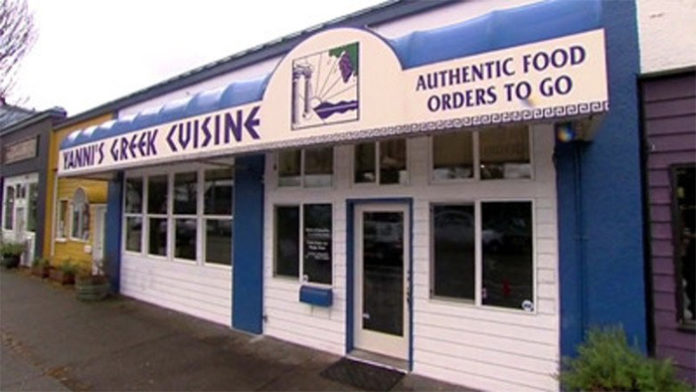 Yanni’s Greek Restaurant has been operating in Seattle, Washington for over three decades. Family owned, it was passed onto its current owner, Peter Augustio, in 2007. While business was initially a success, things quickly changed for the worst. By the late 2000’s, the number of customers that they had dwindled so much, that bills quickly became overwhelming. Before they knew it, they were knee deep in debt; thousands upon thousands of debt. In need of some serious help, they turn to Gordan Ramsay on Kitchen Nightmares.

Arriving in Seattle, Gordan Ramsay makes his way to a local coffee shop, where the owner of Yanni’s Greek Restaurant, Peter Augustio, is waiting for a one-on-one discussion. Sitting down, the two talk about the business’ history- and how they’ve been in the red for many years, despite having enjoyed a successful start. In fact, they’re losing up to $10,000 a month!

Flabbergasted, Gordan asks about his staff, to which the owner replies that its all family members. Inquiring about the problem, Peter explains that there is a lack of focus and that there is no dedication. Probing further, the celebrity chef soon learns that the owner may be too soft on his staff, who are all apparently, unwilling to listen. Moments later, after finishing their coffee, the two make their way into Yanni’s.

Stepping into the restaurant, everyone is quick to greet the celebrity chef, including the owner’s wife, and daughters. A chance to hear another perspective, Gordan sits down with the ladies to talk about Yanni’s recent struggles over the past two years. Almost immediately, they bring up that the food is outdated, that Peter is unwilling to change (despite what he’d said earlier during their previous discussion). Soon, the owner himself joins in the discussion, To Gordan’s dismay, however, the family are soon involved in a heated argument.

Time to taste their food, Gordan sits down at a table to look at the menu. Flipping through the many pages, one of the items eventually catches his eye- the pumpkin hummus. Next, he finishes his order with a moussaka and the house gyro. With that, the waitress goes into the kitchen, leaving the celebrity chef alone to admire the 80’s decor. As he’s doing so, the owner is busy putting together his dishes behind the closed doors.

Moments later, the pumpkin hummus arrives at the table. Taking a bite, Gordan immediately grimaces at the taste. A bizarre combination, even the owner’s wife agrees with his comments; she subsequently returns the dish back into the kitchen. To his feedback, Peter is obviously unhappy.

Next up is the moussaka, which to his surprise, is freshly baked. While Gordan compliments its appearance, however, he finds the meat to be too sweet, and the eggplant too bitter. To make matters worse, he finds a pool of grease at the bottom of the dish. Signalling the staff to come over, he lets them know about his comments. Once again, Peter is livid about his feedback- enough to chase his own wife out of the kitchen.

The third and final dish, the house gyro eventually makes it to the table. Unimpressed with the abundance of sauce, Gordan sends it back without giving it a taste. With that, the owner’s wife returns to the kitchen to tell him that their restaurant is dated- something that he does not take very well.

With his ‘meal’ complete, Gordan confronts Peter about the quality of the food. Not long into the discussion, however, the owner becomes defensive. At this point, he’s still unwilling to change his ways. Shaking his head, the celebrity chef makes his leave out the door.

Later that night, he returns for Yanni’s dinner service- or more specifically, to see how the kitchen operates. Unfortunately, the chaos is quickly obvious. Before long, they receive their first sent-back item from the customers, overcooked pork. Over time, more and more patrons are dissatisfied with the food, which leads to an increasing amount of dishes to arrive back in the kitchen.

Taking matters into his own hands, Gordan decides to inspect the walk-in fridge. What he finds in there, however, is anything but satisfactory. As he continues his search (which yields some ‘disgusting’ ingredients), the owner and the daughters get into another argument. Things only seem to be getting worse over time. Eventually, Gordan reaches his breaking point when he discovers a bucket of moldy beef.

With that, the owner announces that they will no longer be cooking food for the dinner service. As a result, many confused customers are forced to leave Yanni’s on an empty stomach. A devastating night, almost everyone is in tears- including the owner himself.

The following day, everyone returns to the restaurant for another talk. For Gordan, he’s hoping that last night’s events have helped the owner to shake off his denial. Commenting on the ‘disgusting’ refrigeration unit from yesterday, the celebrity chef tells Peter to take more responsibility, to which he once again goes on the defensive. Fortunately, his wife is more level-headed than her husband. After some words from her, Peter finally agrees and asks for help from Gordan.

Moving forward, Gordan eventually takes it upon himself to revamp the menu. Next, he gives the dining room a much-needed makeover, as well as a new POS system. Teaching the staff how to make some of the new dishes, they eventually prepare themselves for relaunch night. While they run into some problems during the service, the celebrity chef manages to make it work. In the end, the customers are happy about the food that they’ve received, and it’s an overall success.

In the weeks that followed Gordan’s visit, Peter managed to successfully adapt to the new changes. Having turned the place around, everyone is much happier- in particular, his daughter, Tariya. Keeping some of their loyal, return customers in mind, they eventually also added some old favorites into the new menu.

At the time of this writing, Yanni’s Greek Restaurant seems to be doing fairly well- on Yelp, they currently have a four-star rating. Looking at some of their reviews, the general consensus appears positive, with praises to their food, service, and atmosphere. Glancing at some of the more negative reviews, wait times may be an issue, though it is already a vast improvement from before.

On top of Yelp, their Facebook page is also filled with nothing positive reviews. Judging from the site, they’ve already got themselves over 1,800 happy fans.