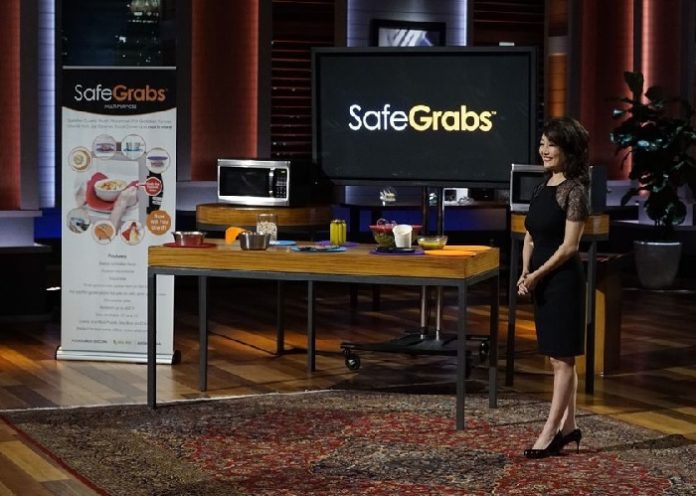 The inventor of SafeGrabs, Cyndi Lee from Houston, Texas, developed her innovative multi-purpose kitchen accessory because as a child she was too lazy to use a towel to pick up hot dishes from the microwave. After continuing her finger-burning bad habit into adulthood she eventually created a flexible silicone disk that could also be used as a trivet, a splatter guard, and a pot cover, it could even be used to open jars.

Cyndi was a big fan of Shark Tank from the first episode and she was determined to get on the show to pitch her original and innovative design. Firstly she applied online and then a year later went to an open casting call, but both times she failed to be selected by the producers of the show. Originally Cyndi called her invention the ‘Micro Easy Grab’, she promoted her product with small local brick-and-mortar retailers and had appearances on the local Houston news. Eventually, she had the opportunity to promote her ‘Micro Easy Grab’ on the Steve Harvey Show where it was suggested her products name could be improved, and she took the advice and changed it to the far snappier ‘SafeGrabs’.

Problems with a manufacturer in her first year of business left her almost without a cent to her name, and Cyndi was living with her parents while working a full-time retail job and trying to make business calls in every free moment. Unable to give up on her dream Cyndi managed to get through that early rough patch with sheer determination and undeterred by her previously failures she applied for a third time to Shark Tank. This time the more experienced Cyndi was successful and she was selected to appear in the tank in Season eight with her segment to be aired for the first time in October 2016.

Cyndi Lee entered the Shark Tank and announced that she was looking for a $75,000 investment in exchange for a 10% stake in her business, but she had a special offer for the sharks and was prepared to increase the stake on offer to 12% just for them.

Cyndi launched into a confident pitch in which she explained about her habit of constantly burning her fingers and her invention of the SafeGrabs product as a result. She efficiently demonstrated how easy the SafeGrabs disk was to use, you just placed it on the turntable of your microwave, cooked your food and then used it to grab hot items. She pointed out how flexible it was, and also ran through her products other uses, showing the sharks how the grooved surface made opening tightly-closed jars an easy task and demonstrating how it’s flexibility and the wipe-clean surface made an excellent no mess plate.

The pitch was short but professionally delivered, and the sharks seemed interested. Cyndi proceeded to hand out sample packs to the sharks and questions from the sharks began to come in quick and fast. Barbara Corcoran first asked about the retail cost of the SafeGrabs. Cyndi told her the 10-inch version retailed at $12.85, with the larger 12-inch version available for $14.95. Kevin O’Leary was interested in the profit margin, he asked about the cost to produce each unit. Cyndi revealed that there was an impressive markup, with the 10-inch version costing only $2.75 to manufacture.

Robert Herjavec wanted to know how Cyndi was selling her product, she explained that currently she was selling online through Amazon, and in several small boutiques, but at the current time she hadn’t managed to strike a deal with any of the bigger retailers. So far Cyndi had dealt with a frantic round of questioning from the sharks well after an impressive pitch, and the sharks were showing plenty of interest.

Barbara Corcoran inquired what value of sales Cyndi had achieved so far, and the entrepreneur revealed that she had managed total sales of $310,000 over the three years she had been in business, but the first year she had achieved nothing in terms of profit as she had encountered problems with her first manufacturer. Mark Cuban wanted a more recent picture and asked what sales had been achieved in the last three months, Cyndi answered by revealing that in the year to date she had made impressive sales of just over $165,000.

Barbara Corcoran thought that there were other versions of the same product already available on the market, but Cyndi explained that although there were similar products made from plastic, the SafeGrabs product was the only one that was made from Silicone and was therefore also flexible. Robert Herjavec noticed that the packaging mentioned a patent pending on the product and Cyndi explained that the flexibility of SafeGrabs was the utility patent she had applied for.

Cyndi went over the history of her business some more, she revealed that after her first manufacturer had let her down she was almost bankrupt. During the first year, she was reduced to having only $11 dollars in her bank account at one stage. She had made business calls from her car during her lunch break as she was still working a full-time retail job, and it had taken until now for her to be able to see the light at the end of the tunnel.

Kevin O’Leary asked how much debt the company currently had. Cyndi revealed that she had just purchased an inventory worth $50,000 and as a result, the company was effectively breaking even now. Cyndi’s performance in the tank had been confident and she had managed to deal with a large number of inquiries from the sharks without a missed step, but would the sharks think that SafeGrabs was a product worth investing in?

For Mark Cuban it wasn’t, without elaborating too much he explained that he saw SafeGrabs as a product rather than a company, and although he admired Cyndi’s professionalism SafeGrabs wasn’t something he was interested in, and with that Mark was the first shark to drop out. Barbara Corcoran was equally unimpressed with the product, personally she just used a towel to grab hold of hot dishes, she didn’t share Cyndi’s vision for her product, and Barbara was out too.

Kevin O’Leary was the next to speak. He didn’t think that SafeGrabs jumped off the shelf at a customer. He believed that when Cyndi, who he described as ‘perky and frisky’ was able to demonstrate the various uses of her product, then it was immediately clear how useful it was, but without such an enthusiastic and professional demonstration it would be harder for her product to catch a customers eye. He dropped out too, but not before remarking that the focus for SafeGrabs was retail and that Cyndi would be good on TV.

It was clear that Kevin believed that Lori Greiner’s QVC empire was the perfect place for Cyndi to promote her product, and Robert Herjavec wasn’t going to cause any problems for Lori if she was interested. He told Cyndi that he loved the product, and he believed her enthusiasm would see her succeed eventually, but the SafeGrabs business wasn’t a business that he would enjoy or be interested in, and with that, he was out too, leaving Lori as the sole remaining shark.

Cyndi looked slightly concerned at losing four out of five sharks in quick succession, but fortunately, Lori Greiner confirmed that she did really like the product and she did have an offer for Cyndi. She asserted that she would be able to get SafeGrabs into Bed Bath and Beyond, Target and other large retailers, and she would also be able to help fulfil the large purchase orders that would arrive as a result, but in order to compensate her for the amount of work involved Lori wanted a 30% stake in the SafeGrabs business.

Cyndi made a counter offer and suggested a 17% stake, pointing out that she had experience in freight manufacturing and that she had grown the company so far as a ‘lone man’ operation. Lori didn’t look impressed at a 17% share in the business and instead repeated that she would bring huge value and sales to the business, but she did agree to drop her stake to 25%.

Cyndi considered her options and Kevin O’Leary advised her to make a decision quickly. Lori asserted that she would make Cyndi a millionaire but Cyndi was still looking for a better deal. Bravely she suggested a 20% stake for Lori but it was clear the Queen of QVC wasn’t going to be offering any more. Lori simply stated that she knew what she could do for Cyndi and the entrepreneur knew when it was time to accept Lori’s offer. She quickly announced ‘Let’s make a deal’ to the obvious relief of everyone in the room and left the tank to a round of applause, remarking that with a partner like Lori Greiner she felt like she had ‘Won the lotto’.

SafeGrabs Now in 2018 – The After Shark Tank Update

Cyndi Lee’s SafeGrabs business is a perfect product for Lori’s QVC retail empire. Cyndi’s segment was first aired in October 2016 and just a few hours after the episode Lori was pitching SafeGrabs on QVC, and her assertion that she knew what she could do for Cyndi was proved to be completely correct. SafeGrabs was sold out on QVC within 10 minutes with sales worth over $300,000, and that was just the start of Lori and Cyndi’s successful partnership.

One year after the segment was first aired Shark Tank gave viewers an update, and an ecstatic Cyndi revealed that in the last year she and Lori had achieved sales worth over $2.4 million. As a result, she was now out of debt, had been able to move out of her parent’s home, and was looking forward to a far brighter future. Cyndi also revealed in a heavy interview at the time of her segment being aired that if she had managed to get on Shark Tank on one of her previous attempts she wouldn’t have had the experience required to give such a polished performance in the tank, it was only her previous TV experience and the problems she had overcome that had given her the confidence to perform so professionally in the tank. And perhaps most surprisingly of all, Cyndi reveals on the SafeGrabs website that’s she’s extremely shy and scared to death of speaking in public, which just goes to show that if you really want to achieve something enough, you can overcome anything.

It’s still early days for SafeGrabs, and so far the product is not currently available in Bed Bath and Beyond or Target, although Lori believes that both of those major retailers will stock them in the future, Cyndi and Lori have scored a big deal with Home Depot, who now stock SafeGrabs in all of their stores nationwide. After such a difficult journey to success, it’s unlikely that Cyndi will be getting her fingers burned again with such an experienced and high profile shark like Lori Greiner as a partner.