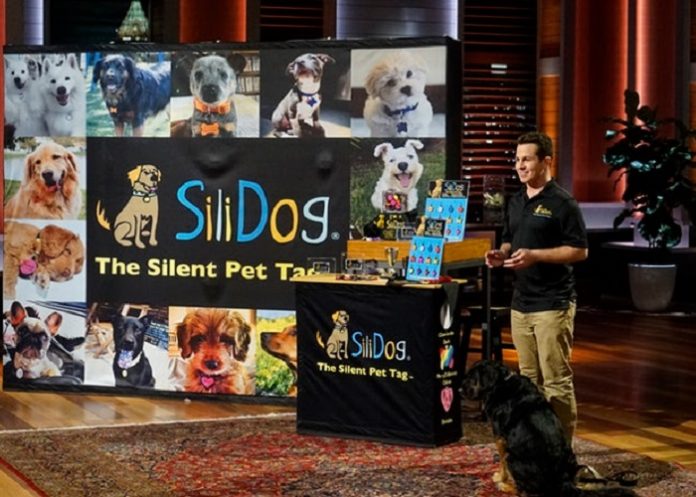 While studying at the University of Florida, Silidog founder Mikey Lickstein took on a rescue dog called Bentley. Bentley had been badly treated and was continually scratching himself, particularly at night, and the constant jangling of his tag was keeping Mikey awake. This was the inspiration for Mikey to create a new pet tag that was durable, long-lasting, and best of all completely silent.

Mikey turned to Kickstarter in 2015 to get the initial funding for his project, and after raising over $11,0000 from almost 250 backers Mikey developed the Silidog silicone dog tag. His new product would never fade, would last longer than any other pet tag, and best of all it wouldn’t make any noise when banging against metal or plastic objects.

Eventually, Mikey managed to get Silidog tags placed in 200 small pet stores, mainly family-owned ones, but after graduating with a masters degree in business Mikey turned his attention to Shark Tank with the aim of expanding his business with the aid of a shark partner. He attended an open casting session in Miami and found that he had been selected to appear in the tank one night while making tags in his garage, something that he did every evening until the early hours. His segment was originally aired in October 2016.

Mikey entered the Shark Tank along with Bentley, usually a sure-fire way to get a good reception from most of the sharks, and he announced he was looking for a $100,000 investment in exchange for 15% of the Silidog business. Mikey launched into his pitch by explaining how he took Bentley on as a rescue dog, and the sleepless nights he began to experience as a result. He told the sharks that after he gained his master’s degree he developed his tags, which were 100% silicone, and guaranteed to not make any noise when a dog was moving around at night. He also explained that his tags had the advantage of never fading, and they even glowed in the dark. The Silidog tags were also fully customizable, were usually ordered with a personalized engraving, and they came in a variety of colors.

As Mikey was handing out samples to the sharks Robert Herjavec asked how much the tags retailed for, Mikey revealed they were available for $19.99 and free shipping was also offered. He would usually be able to deliver them within 5 days of an order being placed. Barbara Corcoran inquired about the cost to manufacture them, and Mikey told her that they cost $2.99 to make per unit, which left the sharks impressed at the large profit margin.

Robert Herjavec remarked that he’d seen plenty of tags that appeared to be identical and asked what made the Silidog tags different. Mikey told him that all other tags were made of plastic, were of lower quality, and would fade over time.

Mark Cuban wanted to know where Mikey was finding customers. The Silidog entrepreneur told him that he had often been to trade shows when building his customer base up, and as a result was now selling his tags in over 90 brick-and-mortar pet stores. Kevin O’Leary was impressed by that, he remarked that Mikey’s distribution efforts had been great so far, but what were the sales so far?

Mikey revealed that in the past 14 months he had made sales worth $142,000. ‘Very good’ Kevin replied, and Mikey also revealed his unusual sales process. Stores would take a Silidog starter pack, the customer would order in-store and pay in advance at the time of ordering. As a result, the costs to Mikey pre-sale were effectively zero. This impressed all the sharks, and Barbara asked for more information about Mikey’s background. He told her that he had obtained a masters degree in accounting from the University of Florida and that he had enlisted the aid of a designer friend to develop the tags after he had graduated.

Lori asked what level of competition there was to the Silidog tags on the market, and Mikey replied that no other tags were selling at anything like the same level, but Robert Herjavec disagreed. He pointed out that there were all sorts of other tags in the huge pet sector. Robert then asked how much the Silidog business had cost Mikey initially, and the young entrepreneur revealed that he had started out with a $5,000 investment and that was all it had cost him to launch the company.

Mark Cuban asked what sales Mikey expected to achieve in the next year, and Mikey confidently asserted he would sell at least $200,000 worth of tags, and he saw licensing the tags with customized logos as the next logical step to expand the business.

All the sharks were impressed with Mikey’s business sense, it was clear that he was a driven individual with sound financial knowledge. Robert remarked that Mikey was ‘Killing it’, but what did he need further investment for? Mikey told him that he was still making the tags himself in his garage, and he wanted to expand from hundreds of units a day to thousands, but he also had to invest in premises and increase his manufacturing capability to do so.

Kevin O’Leary obviously admired Mikey’s achievements, but he announced that he just couldn’t see himself doing ‘The dog tag thing’, and he became the first shark to drop out. Mark Cuban quickly followed Kevin’s lead and told Mikey that he was not into the pet industry, and with that Mark dropped out too.

Barbara Corcoran told Mikey that he had good money management, but his customized business only offered limited opportunities for an outside investor. She didn’t think that she would be a good fit for the Silidog business, and with that Barbara also dropped out of the negotiations. With only Robert and Lori left in the negotiations Mikey looked less confident than before, but his professionalism and sound business sense would soon trigger a feeding frenzy as several sharks began a bidding war to team up with him.

It started with Robert Herjavec, who told Mikey he would ‘Take a flyer’ with him, and offered the $100,000 investment, but only in exchange for 50% of the business. Lori Greiner soon had another offer for Mikey, she told him she could make Silidog a success, but it would take a lot of work, and she would require a 51% share of the business to keep a controlling interest.

Mikey replied that he appreciated the offers, but he looked less than pleased at the idea of giving up such a large part of Silidog. After some more discussion, he made a counter offer to Lori of $100,000 in exchange for a 25% stake, but that was it for Lori, and she announced she was out.

With Mikey not too enthusiastic at his only available offer, the one from Robert for 50% of the business things looked to be heading to a close, but he asked one last time if everybody else was out. ‘We’re very out’ replied Kevin O’Leary, but then Mikey’s luck began to change.

Suddenly Barbara Corcoran announced she was back in, with a better offer for Mikey. She proposed the $100,000 investment in exchange for 30% of the Silidog business, with a $2 royalty per tag until the debt was repaid. Kevin asked if Mikey could afford the $2 royalty, and Mikey admitted that he couldn’t with the wholesale pricing structure. Kevin then told him he was ‘In pain from waiting’ and improved on Barbara’s deal. He offered $100,000 in exchange for 30%, with a royalty of only $1 per tag. Robert looked shocked to have his chances of a partnership fading so quickly, and Barbara quickly matched Kevin’s offer.

Kevin wasn’t going to be outdone by his fellow shark however, he quickly dropped the royalty amount to only 75 cents per tag, but then Lori matched the 30% for $100,000 offer, with a royalty amount of only 50 cents. Mikey could only look on in disbelief as the sharks, who just moments ago had rejected his proposal, suddenly began to argue over who could offer him the best partnership. Robert once again took the lead as he undercut Lori’s deal with an offer of a $100,000 investment for 30%, and a royalty amount per tag of only 25 cents.

Mark Cuban laughed that he was still out, but all the other sharks now had an offer for 30% of the Silidog business on the table. The tension in the tank was electric and Kevin declared that he was worried about the ‘dog dying’ and told Mikey to make a decision. After a moments thought Mikey finally told Lori he would take her deal, that of $100,000 in exchange for 30% and a 50 cent royalty per tag sold until the investment was repaid, and Mikey left the tank to the congratulations of the sharks, having stirred them up into a frenzied bidding war.

Silidog Now in 2018 – The After Shark Tank Update

Mikey Lickstein caused a surprising and unusual change of heart in the sharks and left the tank with a good deal from Lori Greiner, but the fortunes of the Silidog business in the year since the segment was first aired are not overwhelmingly positive, and the exact reasons for that that are not entirely clear.

It’s true that in the immediate aftermath of the show Mikey received a deluge of orders, far more than he was really capable of dealing with in his garage-based one man manufacturing operation, and as a result there were problems with delivery times, and consequently a number of bad reviews of Silidog appeared online at about the same time. Sitejabber currently holds a rating of 1.9 out of 5 for Silidog, with many complaints about delivery delays, and also an alarming amount that complain that the tags will frequently break at the metal ring that connects them to a pet’s collar.

The most recent review on Sitejabber however, remarks that many of these complaints stem from the period of the Shark Tank appearance, and most of the problems that the Silidog experienced at that time of incredible demand have now been fixed. Unfortunately, there do still seem to be several complaints about both delivery times and the quality of the tags that have been made in recent months, and these negative comments are not only limited to Sitejabber, they can be found online on several sites where Silidog tags are discussed.

To balance things out I did find several positive reviews of both the tags and good feedback on the customer service offered by the Silidog business, and having researched the dog tag market online for a short time, it’s clear that Silidog tags are no longer the only silicone dog tags available to customers, and that this particular slice of the multi-million dollar pet market is a very competitive one. I’m left with the impression that the intense competition is responsible for at least some of the negative reviews regarding Silidog online, and it could well be that the positive ones cannot be entirely trusted too.

Ultimately it was the business sense of Mikey Lickstein that scored a deal with Lori in the tank and impressed the other sharks so much, and perhaps Lori saw much more than just a dog tag business in the smart young entrepreneur from Florida, but right now the domination of the dog tag market is a very tightly fought battle, and Mikey Lickstein and his new shark partner are yet to win it.