Brendon Urie is the lead singer of the pop punk/alternative rock band Panic at the Disco. The band has evolved in the thirteen years since Brendon joined, and he is the last man standing from the original members. Most recently, Brendon acted in the lead role of the Broadway play Kinky Boots.

How Did Brendon Urie make his money? 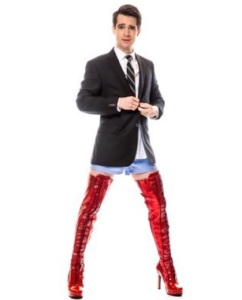 Brendon was born on April 12, 1987, in St. George, Utah. He is the youngest out of five kids. His parents, Boyd and Grace Urie, moved him and the rest of the family to Nevada when Brendon was just 2 years old. He primarily grew up in the Las Vegas area as a Mormon, although his faith did not extend into his adult years.  Brendon went to school at the Palo Verde High School, and it was here that he first came across the person that would introduce him to Panic at the Disco, Brent Wilson.

Brent attended the same guitar class as Brendon Urie, and he urged Brendon to join as the guitarist. Brendon ended up taking over lead vocals, and the rest was history. Panic! at the Disco ended up getting signed under Decaydance Records – the first band to be signed under the label that was manned by Pete Wentz of Fall Out Boy. Since then,  Brendon Urie and his band of constantly rotating members have released 5 massively popular albums, and have collaborated with Fall Out Boy, among other popular bands. In the last couple years, Brendon has acted in the Broadway play Kinky Boots, and also sang “Not a Simple Sponge” for the Spongebob Squarepants musical. 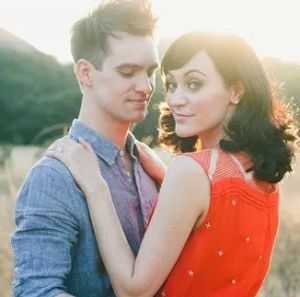 Yes. Brendon might’ve released the album Death of a Bachelor in early 2016, but he gave up the bachelor life years before that. He and Sarah Orzechowski were married in the spring of 2013. They actually met while Brendon was on tour, but did not get together for

Brendon is projected to make at least $500,000 in 2018. He’s still making bank off the release of the Panic! album Death of a Bachelor, and the tour around the UK.

According to a 2016 article by PopBuzz, the cost to book Panic! At the Disco for a private event is somewhere between $100,000 and $150,000. Since Brendan Urie is the only actual full-time member of the band left, one can imagine that most of those funds would go to him. 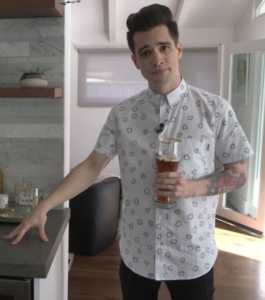 Brendon’s house address is no longer public information. In 2014, the singer bought a house in Encino, California. His fans knew the address, and they frequently sent letters and gifts. The attention gradually escalated until Brendon could no longer deal with the number of letters he was getting or fans showing up at his house. He and his wife moved, and he has not released exactly where. 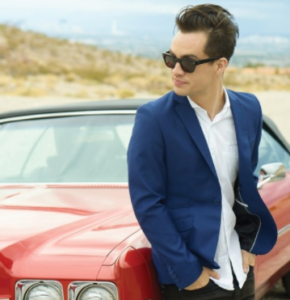 The kind of car that Brendan drives on a regular basis is not listed on the Internet. However, he has been seen driving a vintage red Chevy Impala convertible from time to time.

Through his band Panic at the Disco, Brendon does lots of charity work. In 2014, he and his band donated $20 to the Human Rights Campaign for each member of the Westborough Baptist Church that showed up to protest their concert. He said later that it made him “addicted to charity.” After that stint, Brendon along with the other members of Panic at the Disco made a special T-shirt that they sold during their tour. Anyone who bought that shirt was actually donating to the Human Rights Campaign as all the proceeds from it went to the charity.

They continued the trend of selling T-shirts to fund charitable donations, and in 2016 they held a blood drive before one of their shows in Miami Florida. After legendary rock star David Bowie died of aggressive cancer in January 2016, Brendon had all of the funds from the London show go to benefit cancer research.

In addition to being the headliner for a band that has been successful for 13 years, Brendon was also able to maintain that band despite being its sole original member. He had the ability to adapt to the changing musical climate, while also keeping their original style. Panic at the Disco’s last album, Death of a Bachelor, was the first one to reach number one despite being their fifth album.