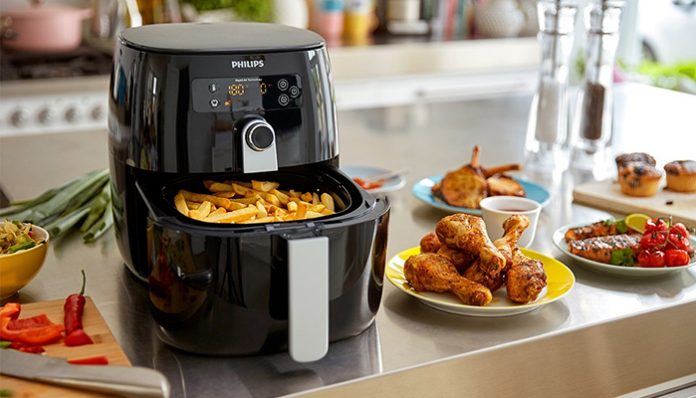 Interested in delicious, yet easy-to-make meals at home? If so, why not consider the Instant Pot? One of the most popular multi cookers on the market today, it serves as both an electric slow cooker and pressure cooker, with many added functionalities that set it apart from similar kitchen appliances.

Sworn by cooks across the country, its popularity has increased tremendously over the past few years. In fact, many home cooks have chosen to replace their various cooking gadgets with the 7-in-1. Considering how versatile the Instant Pot is, and what it’s capable of doing cooking, this really isn’t too surprising.

A Closer Look at the Instant Pot

While the majority of Instant Pots are sold in the U.S., the multi cooker was actually invented in Canada. More specifically, the company had been founded by a group of ex-Nortel employees, who were interested in creating an appliance that was capable of preparing healthy yet easy-to-make meals at home. Despite the fact that none of them had any experience in the subject (in fact, a few had PhDs in computer science), they successfully designed the first model which came out in 2010.

Well received by the general public, they eventually released a second model, which featured new functions based on customer feedback. For instance, they had added a new saute function, which allowed users to easily brown meat, and other ingredients.

Since then, several models of Instant Pot have been released, each more “advanced” than its predecessor. Today, the appliance is often referred to as the 7-in-1 due to its seven different functionalities- the ability to pressure cook, slow cook, cook rice, steam, saute, warm food, and make yogurt.

The Main Models of the Instant Pot

Currently, there are five main models that are available on the market. First off, there is the Lux. The company’s second iteration, it serves as an “economy” option with six basic functions. In contrast to the newer versions, it is not capable of making yogurt, nor does it have different pressure settings.

The third Instant Pot to have been introduced is the Duo. The most popular model to date, it features seven different functions, including the ability to make yogurt. An obvious improvement over its predecessor, it does everything that the Lux can, and more.

The best-selling model, it’s not surprising to know that the company has released a newer version of the Duo called the Duo Plus. One of the newer additions, it comes with a new sterilize function as well as pre-set “cake” programs. Not only that, but it is also fitted with a completely new display.

Speaking of new interfaces, the Ultra is even more unique in that it utilizes a spin dial instead of pressable buttons. In terms of functions, it comes with a new “Ultra” mode which allows you to fully customize the cooking process whether it be pressure level, cooking time, or temperature.

Last but not least, there is the Gem. While it is still a multi cooker, it does not have the ability to pressure cook, like the previous models. In fact, it is often regarded more as a fancy slow cooker.

The Instant Pot: What Can’t It Do?

To summarize, the 7-in-1 multi cooker is capable of:

While versatile, it’s obvious that there are a few things that the Instant Pot is not capable of doing. For instance, it cannot be used to deep fry foods. If you’re trying to cook things such as french fries or fried chicken, you’ll have to look elsewhere.

The Art of Deep Frying

When we talk about deep fried foods such as fries or fish and chips, we generally think of one appliance- the deep fryer. That is, an appliance that is capable of cooking food in hot oil to achieve a crispy texture aka “deep frying.”

How does a Deep Frying Work?

When food is placed into hot oil (generally 350F to 375F), its surface rapidly dehydrates. Through a series of subsequent reactions, the proteins and sugars eventually break down to create the golden-brown color that is characteristic of deep fried foods.

The Cons of Deep Frying Foods

As delicious as the food may be however, there are a few cons to deep frying. Considering the fact that you’re cooking items in hot oil aka fat, it shouldn’t be surprising to know that deep fried foods are high in fat and calories.

Second of all, there’s also safety precautions that must be taken when cooking with hot oil. Generally speaking, it’s not as “fool-proof” as cooking on the stovetop with a pan.

Once the cooking is complete, deep fryers generally also leave an unpleasant aroma- one that is often described as being “greasy.”

The Better Alternative: The Air Fryer

How does it work?

Compared to traditional frying methods (i.e. submerging foods in hot oil), an air fryer works by circulating hot air around the food. To be specific, the desired food is first coated in a thin layer of oil, before being put into the fryer, where the surrounding air is then heated up to 392F.

Today, most air fryers come with adjustable temperature settings that allow for more precise cooking. While it uses much less oil than its deep frying counterpart, the cooking basket must still be shaken on a periodic basis to ensure even oil coverage.

Benefits of the Air Fryer

Not only do air fryers produce healthier food, but they’re also attractive for their safety and convenience. For instance, you do not have to worry about hot droplets of oil splashing out while its frying. As far as health benefits go, foods that are fried with an air fryer are much lower in caloric content, as there is less oil to be absorbed in their preparation.

Because it requires little to no oil, it will also spare you from the unpleasant aroma that is characteristic of deep frying.

Depending on the air fryer that you have, some may even have the ability to bake, roast, and grill. With that said, frying is of course, their main attraction.

While both fryers are able to attain crunchy textures, foods that are cooked in a deep fryer are generally more crunchy due to the amount of oil used in the process. While air fryers are also able to achieve a crispy texture with super hot air, the crunchiness tends to be a notch down from what you’re used to with traditionally deep-fried foods.

While air fryers are manufactured by a number of companies, the most popular brands include Philips, NuWave, and Farberware. Depending on the model, some may include small baskets while others have larger baskets for cooking. When choosing an air fryer, size is something to take into consideration.

When it comes to cooking deep-fried foods, the Air Fryer is a much better option than the Instant Pot. In fact, the latter is not designed for, nor is it capable of getting hot enough for the preparation of said foods. At any time, the unit should not be used to cook deep-fried foods with oil as it serves as a serious fire hazard.

What you could do instead, however, is pan fry your food with the “Saute” function. While the results may be different, it is probably the closest that you could do “deep fry” with an Instant Pot.

While some air fryers come with multiple functions (in that way, it can be similar to a multi cooker), the two appliances are not interchangeable as they are designed for different purposes.

Compared to the Air Fryer, which serves as a healthier option for cooking deep-fried foods , the Instant Pot is generally used as a pressure and slow cooker. Of course, there’s also its other functions such as its abilities to steam, make yogurt, sauté, and more.

Should I Get an Instant Pot or an Air Fryer?

In the end, it depends on what you’ll be cooking with the appliance. If you’re aiming for fried chicken or french fries, you’ll want to go with the Air Fryer, as the Instant Pot is not capable of “deep-frying.” If however, you’re looking for something to cook rice, or make stew, the Instant Pot is an excellent choice.