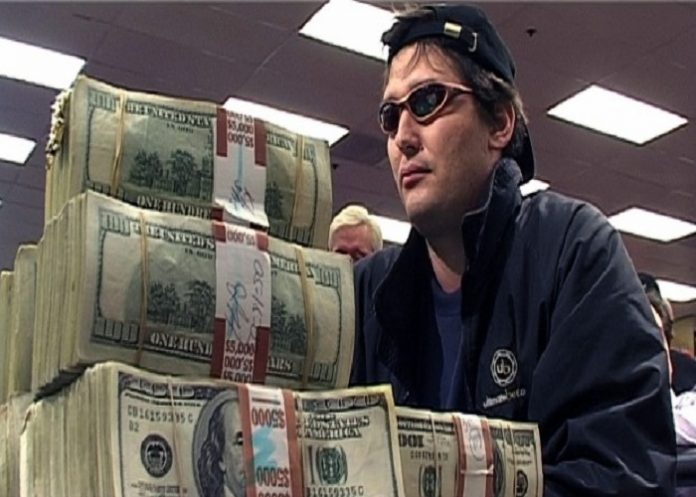 Poker is a funny old game, you’re either riding high with a spring in your step and total control of all around you, or you’re in a pit of despair unable to win a dime, or at least that’s how it is for me. For the top players in the World, however, things are a little different. The caliber of Phil Hellmuth, and the top professionals he often plays with mean that their game is more about the poker face, or the ability to bluff convincingly, or perhaps some other undefinable aspect of the game that mere mortals like me can’t hope to comprehend.

How can you be better than 99.99% of players in a game that depends largely on luck? Whatever the secret is, Phil Hellmuth clearly knows all about it. If you ask Phil who the best player in the World is, then he’s in no doubt about the answer. The Bio section of his website begins with the words ‘Phil Hellmuth Jr. is the greatest player to ever play the game’, and even though the boast is almost as shameless as some of his infamous mid-game explosions of anger, Phil Hellmuth is certainly one of the best, if not the absolute best.

But how much has the big man from Madison, Wisconsin earned during his career at the tables? What else does he do to increase his earnings? And how much is the Poker Brat worth now in 2018? Read on to find out.

How Did Phil Hellmuth make his money & wealth?

The most commonly quoted figure for Phil Hellmuth’s net worth is $20 million, but that figure is based on nothing more than guesswork, as Phil’s income from his many business activities away from Poker, as well as his income from high-stakes cash games are not public knowledge. What is known is that Phi Hellmuth is, as of today, standing at 11th in the Hendon Mob all-time money list with total winnings from open and invitational events of $22,225,520. Six months ago Phil was in 9th place in the every changing order of the list, but since then he’s still won almost a quarter of a million dollars even though he’s dropped a couple of places.

Phil has won the most World Series of Poker (WSOP) Bracelets, a total of 14, but even though they are a matter of prestige to many players, essentially they come with no additional monetary value, although they do tend to be jewel-encrusted these days. Phil’s poker achievements, from his record-breaking win at the 1989 WSOP Main Event, the youngest ever champion at the age of 24, to his 14th bracelet at the 2015 $10,000 Seven-card Razz tournament have netted him around $4 – $5 million, but how many of Hellmuth’s big poker wins were staked is unknown, and therefore his true level of poker earnings are not really known.

Phil has many other business interests, he sells a line of ‘PokerBrat’ clothing, hats, and accessories from the Pokerbrat website, also taking the opportunity to promote his numerous videos, books and his autobiography, also called ‘Pokerbrat’. And he also owns his own publishing company, ‘Phil’s House Publishing’, which has published the books of other top players. Phil has worked as a commentator on ‘Celebrity Poker Showdown’ and been a poker coach on the ‘Best Damn Poker Show’ on the Fox Sports Network. And of course, as one of the most entertaining players in the top leagues, Phil is a regular on televised high-stakes games, a sure bet for producers because if we’re honest, all of us love to see Phil go crazy when the demons of bad luck pay him a visit, and he’s consistently a big draw for viewers.

Phil reunited in December 2017 with TV show ‘Poker After Dark’, the scene of many of his biggest flare-ups, to take part in ‘Holidays with Hellmuth’. In the final of three tournaments, the $25,000 Sit ’N’ Go, he joined a classic line-up including Daniel Negreanu and Doyle Brunson and managed to overcome the mind-reading abilities of Daniel Negreanu to win first prize, along with $100,000 on top of his reported $50,000 per episode appearance fee. Phil also charges $50,000 a time to appear at corporate events, and he’s signed endorsement deals with a number of brands over the years.

All of these activities net Phil Hellmuth a sizeable annual income, but his involvement with Ultimate Bet quite possibly made even these profitable income streams pale into insignificance. In 2001 Phil joined Ultimate Bet as chief spokesperson and also as a minority shareholder. During those boom years for online poker, Phil Ivey was making $1 million a month from Full Tilt, and although Hellmuth wasn’t quite as marketable as Ivey, it’s not unreasonable to estimate that Hellmuth was taking at least $500,000 a month from his involvement with Ultimate Bet.

Excapsa, the parent company of Ultimate Bet, entered the London stoke exchange five years later and was valued initially at around $400 million. Although the exact value of Phil Hellmuth’s share in the company is not known, it’s not unreasonable to assume he held a similarly sized stake as his co-spokesperson Annie Duke, of around 3 million shares, and the capitalization of Excapsa would, therefore, make his share of the business worth around $20-30 million at the time.

Even though Phil has been a multi-millionaire jetting around the World since a young age, his home life is one of settled domestic bliss. He married wife Kathy in 1990, a year after his first WSOP Main Event win, and the couple settled in quiet Palo Alto, California. Ironically Poker’s most temperamental player is married to a psychologist, Kathy is a clinical assistant Professor in Psychiatry and behavioral science at Stanford University, and in the case of Phil and Kathy, opposites really do attract. The couple has enjoyed almost 30 years in a strong, steady marriage and they have two adult sons, Phil III, and Nick.

Phil Hellmuth’s poker winnings for the last year have been well in excess of $1 million, and with additional appearance fees from TV specials such as the ‘Poker After Dark : Holidays With Hellmuth’ series shown in late 2017, his earnings for the last year should be well above $2 million, but of course, with numerous business interests, many unknown investments, several public appearances, endorsements, and those lucrative cash-game winnings all not in the public domain, the true level of Phil Hellmuth’s annual income in 2018 can only really be guessed at.

Where does Phil Hellmuth Live?

In 2010 Phil invited Card Player TV round for a tour of his modest home in Palo Alto. Although the 4,000 Square foot home is less extravagant than you might expect for one of the World’s top poker players, the home is worth around $7 million today, and even though Phil would prefer to move to Las Vegas to be nearer to the poker action, wife Kathy prefers the peacefulness and tranquillity of the home they have lived in since 1998.

Phil’s achievements in poker are numerous, despite the abrasive personality and egotistical persona he projects publicly, his successful personal life and many accomplishments point to a far more settled and content personality than one would imagine. Phil was the youngest winner of a WSOP main event in 1989, he has won the most WSOP bracelets overall, at 14, and he became the first player to ever win both WSOP and World Series of Poker (Europe) main events in 2012. Phil Hellmuth, undoubtedly ONE of the greatest poker players of all time, was inducted into the WSOP Poker Hall of Fame in 2007.