What Happened to Kellyanne Conway? – 2018 Update 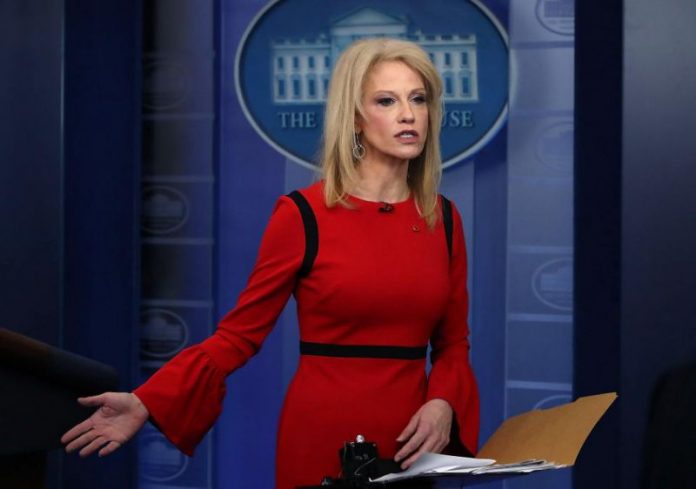 There’s not much to say about Kellyanne Conway that hasn’t already been said. Whether you’re from the conservative side of things and see her as a woman who helped the Trump campaign win based on her intellect and own brand of feminism, or if you’re from the more liberal side of things and see her as a hack who couldn’t hold a debate even if it came in a bucket, there is one thing that everyone can agree with; She was a novel presence in the Trump White House’s first year. But since being released from the White House, what has she been up to? Here, we will take a look at what Kellyanne Conway is doing in 2018.

As of 2018, Kellyanne Conway has maintained a consistent appearance on media outlets, usually due to controversy, which at this point could become her middle name. It also appears her husband, George Conway has also begun to weigh in on the presidency her wife has left (usually with subtle Twitter jabs or observations). Conway, since her departure from the Trump White House, appears to still be in the process of paying for some less than well-advised moves she had performed while working as a Trump Spokesperson. Among these is from 2017, where she encouraged Americans to buy Ivanka Trump’s clothing line while holding a White House press conference, which caused quite the uproar. She is also still currently under the magnifying glass for not so subtly advocating for the conservative option in an Alabama special election for Senate. This action is suspected to be in violation of the Hatch Act, which limits the ability of the office of the President to advocate the election of other politicians while in office in an overly partisan manner in an effort to keep the peace between political factions. At this time, she is currently still being investigated by the Office of Special Counsel. In the public spotlight, Conway has continued to appear for interviews despite many outlets outright denying her credibility, often making for interesting television but not exactly informative programming. It seems that 2018 will prove to be another interesting year for the Conway’s, and this story is very far from over.

Born Kellyanne Fitzgerald to a truck business owner and a bank worker, Kellyanne grew up primarily in New Jersey. While attending high school, she would become very involved in sports, including cheerleading, and also work during the season at a blueberry farm, which she credits for her hard work ethic as she got paid by the pound, not the hour. After graduating from St. Joseph High School she would go onto Trinity College in Washington D.C., where she would get a B.A. in Political science and elected to Phi Beta Kappa, the oldest honor society in the United States. She would then go to George Washington University and get a law degree, soon after working at a superior court in D.C. She would eventually transition from law to the limelight when she began working for the Wirthlin Group, a polling firm who worked closely with primarily Republicans. During the 90’s, she would partner with Laura Ingraham and Ann Coulter to try and bring a more female perspective to Washington conservative politics as they began to appear on news programs. She would later gain prominence in this role only to be rivaled by her friend Ann Coulter, and would also create her own polling center tends to focus on how to best spin messages to women.

Perhaps as a result of her polling experience, or perhaps due to her onscreen persona, in 2016 she would be tapped as a Trump campaign head, despite originally wanting Ted Cruz to win the Republican nomination. While originally hired to get more women voters onboard with Trump, she would soon be fielding defense for several of his leaked conversations, and during his onboarding as presidency, would do everything from coin the term “alternative facts” to breaking up a fistfight at inauguration afterparty by landing a few punches on one of the guests. Later on, she would the cause of the “Bowling Green Massacre” controversy, where no such event had happened. Not long after, she would run into the aforementioned issues regarding Ivanka’s business, and even having the faux pas of saying former Michael Flynn had the full confidence of the Trump Administration as the National Security Advisor when by the next day Flynn would have resigned and left the position vacant. Unsurprisingly, a similar incident would happen with Kellyanne Conway’s career with Trump, with full confidence being said, but the office boxes being packed up and shipped out regardless.