What Happened to Turtleman – 2018 Update 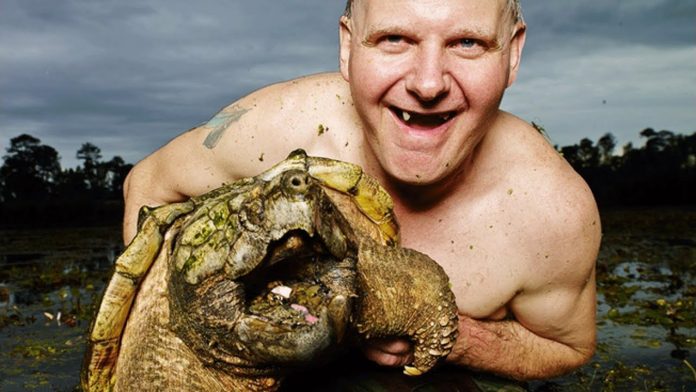 Making it onto screens across the nation from 2011 up to the present day in reruns, Call of the Wildman, and in particular its star, The Turtleman gained quite a bit of attention regarding their pest control and relocation service. However, near the end of the show’s run, both Animal Planet and Turtleman got into a snare of their own. What happened, and where is Turtleman now in 2018? Let’s find out.

As of 2018, it would appear Turtleman will likely not show up on Animal Planet’s roster anytime soon. This can primarily be attributed to a Mother Jones expose that shed some light on the rather dark behind the scenes of Call of the Wildman. This revealed the fact that Call of the Wildman would regularly use pre-captured animals for setting up scenes, which while not great, was far from the worst to come. Some of these animals, due to production practices would be treated poorly, malnourished, and put in deplorable conditions which resulted in the death of several “rescued” animals. While Animal Planet and Discovery Communications initially stated there was no wrongdoing, a report from the USDA would say otherwise with their investigation that started with an Animal Welfare complaint. The USDA reported in their 2014 investigation that multiple animals likely “suffered deprivation and distress that threatened their health and well-being”. This was not helped by the fact that while on camera, Turtleman tackled a zebra (a protected species) while being filmed. By the final season, Kentucky Nuisance Wildlife Control Officers expressed some serious concerns as well, as Turtleman, unlike previous years, did not have a permit to capture nuisance animals which he was filmed performing such actions. While Turtleman and Call of the Wildman originally showed an alternative to what many viewers would see as their day to day lives and cultures and thus got plenty of views early on, by the end of the series, both Turtleman and Animal Planet were in very hot water from the press, animal rights groups, and even branches of the United States Government. At current date, Turtleman is leading a private life and avoiding news headlines as much as possible.

Part of the Discovery Networks attempt to rebrand themselves into reality “edutainment” television, Turtleman and his show Call of the Wildman joined the ranks of Swamp People and Duck Dynasty as a predominantly Southern show about subcultures and jobs that were rarely covered by mainstream media. Discovered via the public access television show Kentucky Afield, Turtleman (actually named Ernie Brown, Jr.) gained some level of fame as the segment of one of the episodes followed him around, and was later uploaded to YouTube. On YouTube, he would gain viral fame early on, and among the viewers would be NASCAR driver Carl Edwards who would hook him up with an agent and lawyer to help him get more film coverage. By 2010, Turtleman would meet Animal Planet executives who first gave him a show titled “The Turtleman of Wild Kentucky”, though the name of the show would change to “Call of the Wildman” which alluded to his signature yell. By 2011, it would be one of the most highly viewed shows on Animal Planet with over three-quarters of a million views in the fourth fiscal quarter. Despite this popularity, it would appear Turtleman was a bit of a bargain for Animal Planet; While being what one could consider a reality tv celebrity, Turtleman would continue living on a budget that would be more similar to a backwoods hunter. Part of Turtleman’s appeal to audiences is that unlike many pest removal experts, Turtleman would handle dangerous animals with his bare hands much like the more famous hosts of Animal Planet history, Steve Irwin, and Jeff Corwin. In regards to his name, as you may expect, Turtleman got his name from his ability to catch snapping turtles, something he has done for reportedly 44 years. For those curious about his appearance, particularly his loss of teeth, he has an interesting explanation for that as well. Supposedly, the loss of teeth was caused by getting slammed in the face with a chainsaw, failing a Dukes of Hazzard style maneuver to dodge a tractor, and lastly, an explosion caused a chunk of metal to hit him squarely in the mouth, making him lose all but the 7 teeth left in his mouth. While Turtleman may be controversial, and perhaps even damaged, one could never say that he’s ever been anything but interesting.