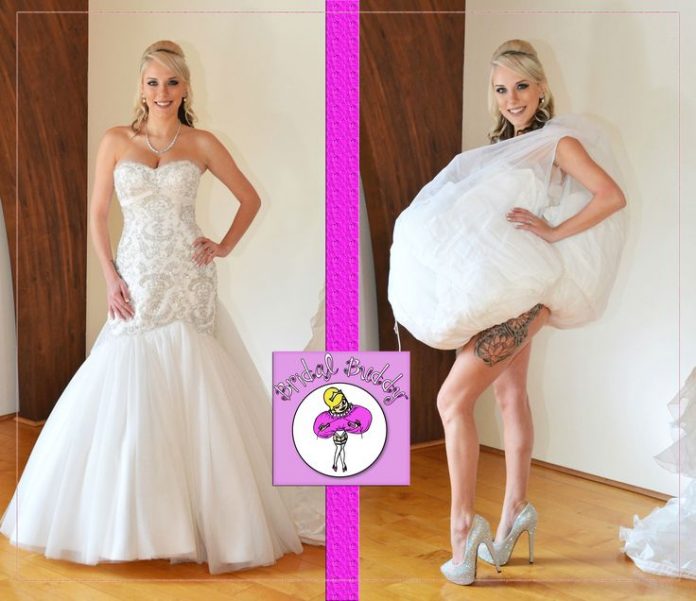 Heather, from Poconos, Pennsylvania, has been working in the bridal industry for 11 years. She loves working with brides because it’s a happy day in their lives. They’re glowing, they’re excited, and Heather is excited to work with them. She came up with her product after watching brides try on their gowns and there was indeed a problem to be solved. The product idea has been on the side for about a decade because she wanted to start a family, and nobody believed in the idea as much as she did. She’s divorced now, and although she didn’t have as much encouragement as she would have liked back then, she has a lot of it now.

She put in $40,000 worth of her retirement money into the product. That wasn’t easy, but she’s glad that she did it. She has found the confidence in herself to help the product go all the way, and with a Shark behind her, she can go all the way. To demonstrate the product, she brings with her a model wearing a beautiful wedding gown into the Shark Tank. Both of the women enter and Heather introduces herself.

She is the inventor of Bridal Buddy. She is seeking $75,000 in exchange for 10% equity in her company. Weddings are a magical time for brides, a day every girl dreams about. But there’s a not-so-glamorous side. Imagine – you said your vows, you’re at the reception, you’re eating, drinking, dancing, and generally having a great time in your gorgeous gown. All of a sudden, it hits you.

You have to pee!

So, what do you do? You could recruit the help of your bridesmaids, who are two sangrias deep with the groomsmen. So, what do you do? In comes the invention, the Bridal Buddy. It’s a thin slip that is worn under the gown used to help you bag up the dress so you can use the bathroom on your own. You simply bag up the gown, and the dress is fluffed enough for you to use the bathroom. There are holes for arms, and you simply adjust the drawstring your gown is bagged. 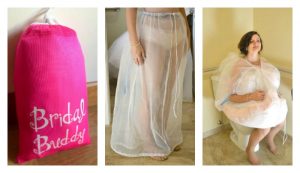 Marissa, the model, hands out samples of the gowns to each of the Sharks. Lori comments on the pretty packaging, while Kevin remarks that normally, the bride would take one of the bridesmaids into the washroom with you, where she would assist. This is a long-term tradition of the bridesmaid, to indeed be the maid of the bride and assist her in her toilet duties. Robert and Lori break out into laughter, telling Heather that she can ignore Kevin. Barb then asks how Heather developed the idea, and Heather starts by prefacing that she began working in the bridal industry in 1998. She did all sorts of jobs in the industry, but the one question that women would always ask is “how do I go to the bathroom?” She would have to say that you can take the girls with you or wear a garbage bag – the garbage bag comment catches the attention of the Sharks.

In 2002, Heather came up with a prototype. She was expecting her children at the time, and she had to put the business aside. She was a stay-at-home mom for a few years, and then she finally went to live on her own with her children. In the house, she found the bag that she had kept of all her notes and materials and it hit her that is was finally time. She came up with a better version of the original and in 2015, she was fully operational.

Robert comments that 13 years is a long time for the business to stagnate. Heather elaborates further – life happens, and without going into much detail, it’s important to surround yourself with positive and encouraging people because that is the way you get ahead. She found this out the hard way, and it took many years to figure this out. Barb asks what sparked the change, and Heather was the change. She kept moving on ahead and kept trying to get the best possible version of it, and she is proof that you can overcome any obstacle and get where you want to be. Start by focusing on the future, but everything is a learning experience for Heather.

Robert returns to the business at hand and asks about the sales. To date, starting in 2015, Bridal Buddy is up $195,000 in sales. One Bridal Buddy unit costs $29.95, and it costs Heather $14 a piece to make it. Even at low volumes with a $14 cost, the product could easily support a $39.95 price point. Heather started at $59.95, and things were great. But she had brides tell her that it was way too expensive and it’s too much. Sales did start to flatline after awhile.

Robert asks Heather who the largest bridal retailer is, David’s Bridal, and asks if she ever approached them. The Bridal Buddy does not fit with their merchandise, and Lori simplifies – they don’t like the potty association. Mark speaks up, saying that he is impressed with Heather and believes in her success. The wedding industry, however, he has no interest in, so he is the first Shark to exit. 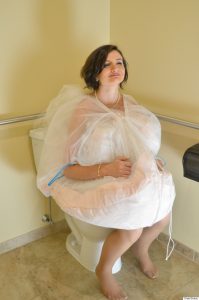 $195,000 for a $29 item is great, Robert says, and she is going somewhere. He thinks that the price point is too low, and even Mark agrees. It will be very difficult to sell one at a time online unless she can make that retail association. Most brides would buy at the point of purchase. That’s a lot of legwork to do, so Robert is the second Shark out of the deal. This leaves Lori, Kevin, and Barb.

Marissa says that she wants to say something on Heather’s behalf, which is that she is an incredible human being. She was working two jobs when Heather approached her, and the idea of trunking around on Sundays for eight hours was not appealing. Marissa still did that, and she showed her underpants to the international community because she believes in Heather. She loves Heather, and sometimes when you love somebody, that means showing everybody your underpants. Heather is brilliant, and the way that brides react to the product is something else. One lady explained to Marissa that she had a bridesmaid climb under her wedding dress and tear her Spanx apart with her bare hands. Lori and Kevin begin to whisper to each other, and a deal is brewing.

Kevin comments that Marissa is a great salesperson and asks her if she has a part of the company. Heather owns all of the company. Lori explains that when she first started her own career, there were people around her that were non-believers. She knows what Heather has experienced, and she sees a reflection of that in Heather. What is Heather missing, exactly? She needs connections and some help in order to get the companies to listen to her. Lori is the first to extend an offer.

Lori can help with the manufacturing of it and get the costs way down in order for the Bridal Buddy to be available at a reasonable price. Kevin has a platform, Honeyfund, so the two will go in together to give her an offer. But what if they bring Marissa in? Kevin has to see her in the deal and grant her ownership. They will all go in together to split the business 25% each. This gives the Sharks half of the ownership and splits the other half between Marissa and Heather.

Robert then interjects and explains that they are taking 75% of the business since they are redistributing it. The deal is $75,000 for 75%. Even Mark agrees with Robert, but Barb has an offer to make. Barb has a simple offer. She was initially disinterested when she heard that it took her 10 years to get the business, but she reflected back on her boyfriend who ran off with her secretary. Heather is never going down again.

Barb thinks the only missing ingredient is salesmanship. Marissa is phenomenal at this, so the deal is $75,000 for 33% of the business. Lori then speaks up as she didn’t like the offer and wants to erase it. Don’t look back, look forward, right? Marissa is removed from the offer, so Kevin and Lori offer to go in at 40% with 20% being split among them. There is no contingency that Marissa has to be involved in the business. 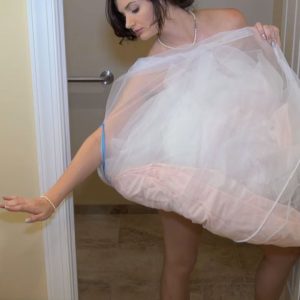 Heather haggles for a minute, asking if Lori and Kevin would come down to 30% for the $75,000 investment. Barb then offers the same, $75,000 for 30%. Lori would do the deal if Kevin would do the deal. Kevin and Lori accept the terms, leaving Heather to determine which deal to accept. In the end, she agrees to partner with Lori and Kevin. Marissa gives Heather a big old hug, and the two are more determined than ever to move Bridal Buddy forward.

Bridal Buddy is still operational and more popular than ever before. After appearing on Shark Tank, the company went on to appear on numerous talk shows like The Steve Harvey Show, local television stations, and have even appeared in magazines and print articles. They also maintain YouTube, Facebook, and Instagram pages to advertise their product – a recently posted YouTube video has gathered just under 2 million views.

Since Kevin is in charge of the manufacturing, he has also seen it fit to bundle his Poopourri product with the Bridal Buddy, resulting in a refreshing and pleasant trip to the bathroom for brides on their wedding day.