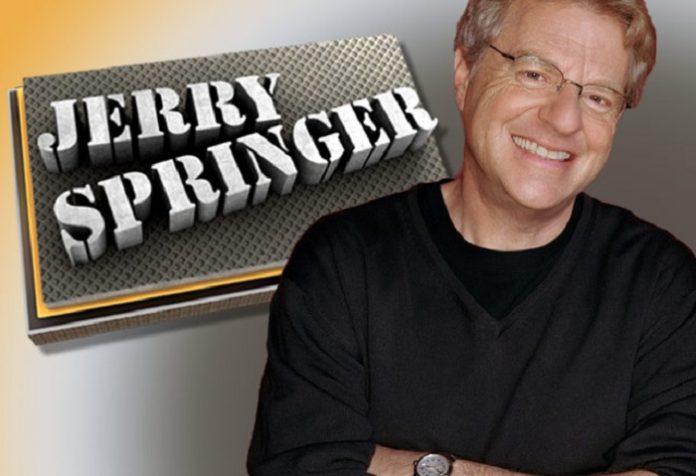 The Jerry Springer Show has often been described as the lowest common denominator of television, or perhaps more diplomatically as just a ‘Tabloid’ show, but its light-hearted feel and sensational content was a winner around the World, and as a result Jerry became, for a short while at least, the host of the most popular chat show on TV. As a result, Jerry Springer has earned a considerable fortune from his TV success, but how much is he worth now in 2018? Read on to find out.

How Did Jerry Springer make his money & wealth?

Despite the lurid appeal of Jerry’s show, the man himself has always been someone with an air of respectability, the lone voice of reason and maturity amongst all that dramatic chaos, yet his personal life has been filled with the kind of sensationalism that is commonplace on his show.

Jerry’s birth was dramatic, he was born on February 13th, 1944 in an underground tube station in Highgate, London. The station was used as a bomb shelter, and Jerry’s parents, both Jewish, had fled to Britain from Nazi-controlled Germany. Jerry emigrated to America with his parents after the war in 1949, and they settled in Queens, New York, where he attended Forest Hills High School.

Jerry Springer showed an early interest in politics, he was particularly impressed by John F. Kennedy, and after graduating with a B.A. degree in political science from Tulane University in 1965, he went on to earn a law degree from Northwestern University in 1968. His first job was as an advisor in the political campaign of Robert F. Kennedy, but that ended just a few months later when the younger Kennedy brother was assassinated.

Jerry began his own political campaign in 1970 when he ran for Congress, ultimately he failed to win the election although he achieved an impressive share of the vote. The following year Jerry was elected into the Cincinnati City Council, but after a scandal in 1974 involving Jerry, a visit to a massage parlor he made, and a check he used to pay for ‘services rendered’, he resigned after admitting to his actions at a press conference. Cincinnati media outlets claimed his political career was over, but Jerry’s honesty made him popular with voters, and in 1975 he won his seat on the council back, in a landslide victory. The high point of Jerry’s political ambitions came in 1977 when he was selected by the council to serve as mayor of Cincinnati for a year, but that was the maximum term allowed, and after that, he was ineligible for the office.

Jerry chased the Democratic nomination for the position of Governor of Ohio in 1982, but he finished third in the election. His political ambitions took a back seat as a new career as a journalist blossomed. Jerry worked with a Cincinnati NBC affiliate, WLWT, as a political reporter, and his nightly show, ‘Jerry Springer’s Nightbeat’, proved to be a huge draw to viewers, eventually gaining the stations biggest ever ratings and resulting in Jerry’s promotion to managing editor of WLWT. Jerry’s media success during the 1980’s eventually won him his own show in 1991. At first, The Jerry Springer Show was a politically-focused affair, with some serious subjects such as poverty and gun control being discussed by Jerry and his equally respectable guests, usually politicians and lawyers. But the format wasn’t bringing the kind of success that the producers had hoped for, so at this point, they took the respectability of the show down a notch and pumped the sensationalism up to 10.

The Jerry Springer Show that the World grew to love was born, and the ‘circus’ featured those cheating partners, warring factions and people who married animals from that point onwards. By the late 1990’s Jerry was earning $5 million a year for the show, in 2000 he was given a five year, $30 million contract, paying him $6 million a year, and in the process making him one of the highest paid chat show hosts of the time. His earnings were exceeded only by Oprah, but Jerry’s ratings would occasionally beat even Oprah’s, a feat that no-one else managed at the time.

Jerry’s Springer’s personal net worth was boosted by his leading role in ‘Ringmaster’, the 1998 comedy in which he essentially played a dramatized version of himself, although the movie didn’t enjoy the same kind of popular reception as his real-life show, instead it bombed at the box office and was poorly-received by critics. Jerry also had appearances on ‘Dancing With the Stars’ in 2006, which saw him dancing to the bank with $3.5 million, and ‘America’s Got Talent’ in 2007, for which he received another $2.8 million. Now in 2018, Jerry’s personal fortune is at least $50 million, although some sources, such as TheRichest, estimate that the Ringmaster of TV’s most entertaining human circus has a net worth of $75 million.

Jerry’s personal life is a long way from the parade of drama that his guests usually experience. He married wife Micki Velton in 1973 and the couple had a daughter, Katie, in 1976. They divorced in 1984 but Jerry, unlike the guests on his show, is known for keeping his personal life well away from the media, and despite numerous offers, Micki has so far refused to say anything about why they split, only remarking that she’s focused on her own future.

The Jerry Springer Show is now older than many of its guests and viewers, but it still remains hugely popular. NBC signed Jerry’s latest contract in October 2014 for another four years, and it comes up for renewal in October 2018. According to Mediamass, Jerry managed to earn a staggering $58 million in the year to April 2018. Their calculations include Jerry’s ownership of a burger restaurant chain, endorsement deals, and his recently launched personal vodka brand. If Mediamass is correct, then that monster paycheck makes Jerry Springer the highest paid chat show host in the World today.

Jerry has extensively supported several charities, including the Teenage Cancer Trust and World Jewish Relief. He keeps fans of The Jerry Springer Show up to date with the latest circus acts on his website, and posts frequent snippets of the entertaining antics of his guests on Twitter, where he’s followed by 125,000 fans, and Facebook, where another 2.7 million keep an eye on the ringmasters latest exploits.