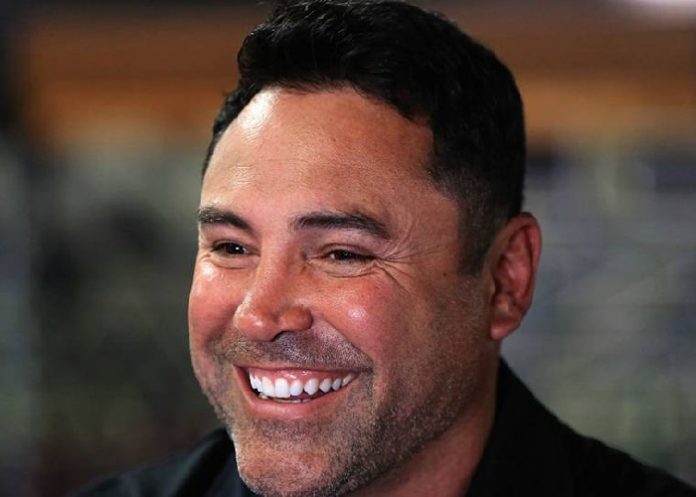 Oscar De La Hoya is one of the most successful fighters of all time, and not only in the boxing ring but in terms of his earnings too. The Golden Boy has hung up his gloves for good now, but the respect he earned during his long and successful career, has allowed him to become one of the most influential boxing promoters of the current era.

Oscar retired from the sport in 2009, at the age of 36, after a grueling defeat to Manny Pacquiao, and since then he has concentrated on his boxing promotion activities. His success in the ring generated an enormous personal fortune for him and earned record-breaking figures from pay-per-view events. Now in 2018 Oscar De La Hoya is still a pivotal figure in the top tier of professional boxing, and his earnings are boosted by a few other surprising interests that you might not know about. So how much did Oscar earn during his boxing days? And how much is he worth now? Read on to find out.

How Did Oscar De La Hoya make his money & wealth?

Oscar De La Hoya comes from a family with boxing in its blood. His father Joel Sr. was a boxer, and so was his brother Joel Jr. Oscar’s amateur career made it obvious he was a star of the future, as well as showing that he could fight at a variety of weight classes with ease. In 1989, at the age of 16 he won the National Golden Gloves as a Bantamweight, the following year he picked up a gold medal at the Goodwill Games, the youngest American boxer to do so, and he also moved up to featherweight and won the US National Championship.

Oscar’s amateur career comprised of 234 wins, with only six losses. His opponents were not easy prey for him either, two of his six losses were against four-time World Champion ‘Sugar’ Shane Mosley. Oscar won the US National Championship again in 1991, and his amateur career culminated with his Olympic Gold Medal win in Barcelona in 1992. The victory was made all the more poignant by the fact his mother’s dying wish had been for him to win the Olympic Gold, a story the media covered extensively during the competition, leading Oscar to earn his nickname ‘The Golden Boy’, which he’s kept throughout his career.

Oscar De La Hoya’s professional career started in the same impressive style. His début took place in November 1992, when he stopped Lamar Williams with a first-round TKO. After an unbeaten run of 11 wins with no losses, and only one match that went the distance, the unbeaten fighter picked up his first World title in March 1994, by stopping the undefeated Jimmy Bredahl after ten rounds to take the WBO super featherweight title. Oscar successfully defended the title two months later against another unbeaten fighter, when he stopped Giorgio Campanella after just three rounds.

By 1994 Oscar had moved up to the lightweight division, and in July of that year, he won the vacant WBO lightweight belt with a second-round KO against Jorge Paez. Oscar’s first defense of the belt saw an impressive unanimous decision win against Puerto Rican John-John Molina, who had held multiple world titles, it was only the second time an opponent had managed to go the distance with Oscar. A unification bout with Rafael Ruelas, in May 1995, saw Oscar win the IBF lightweight after knocking down Ruelas twice in the first round. The match was stopped in the second, but Oscar relinquished the IBF belt and instead took on the undefeated Genaro Hernandez, who retired after six rounds with a broken nose.

Oscar De La Hoya’s career is notable not only for his undefeated run of 31 wins, only six of which went the distance, before he finally lost a match in September 1999, but also his ability to switch between weight classes with ease. He won the lineal and WBC light-welterweight championship in 1996, and the following year he was up to welterweight, winning the WBC title against Pernell Whitaker. In 2004 he won the WBO middleweight title after a unanimous decision against Bernard Hopkins, in the process becoming the first fighter to win titles in six different classes, and it set the scene for his multi-million dollar payday against Bernard Hopkins, in the WBA, WBC, and IBF unification bout in September of that year. Oscar was knocked out in the ninth round, in only the fourth defeat in his career, but he picked up $40 million for the fight, and the 36-minute bout earned him around $1.1 million a minute.

Oscar De La Hoya eventually felt the ravages of time, and after a grueling defeat against Manny Pacquiao in December 2008, he finally announced his retirement for good in April 2009. His Golden Boy Promotions company, which he founded in 2002, became his main focus after that, and now Oscar is a major figure in boxing promotions. On June 13th 2018 he announced that Canelo Alvarez and Gennady Golovkin will meet for a rematch later this year, and his career in the ring, followed by his work organizing matches since he retired, have seen him build up an impressive net worth of $200 million, making him the fifth highest-earning boxer of all time.

Oscar De La Hoya began a relationship with Miss USA 1995, Shanna Moakley, in 1997. In 1999 they had a daughter, Atiana, but in September 2000 she saw Oscar escorting Puerto Rican singer Millie Corretjer to the Latin Grammy Awards on TV. Their relationship ended soon afterward, and in October 2001, Oscar married Millie. They had a son, Oscar Gabriel, in 2005, and a daughter, Nina, in 2007. Oscar also has three other children from previous relationships.

Oscar De La Hoya is the majority owner of Golden Boy Promotions, Inc. which he founded in 2002. Now in 2018, it is one of the most active and respected promoters of boxing matches and includes the Golden Boy Enterprises branch of the business. Golden Boy Enterprises has invested in a variety of sporting business activities. It holds a 25% stake in the Houston Dynamo soccer team, and in 2007 the company bought KO magazine, The Ring and World Boxing Magazine from the Kappa Publishing Group. The three magazines account for 95% of all boxing magazine sales Worldwide. Oscar teamed up with Mervyns department stores in 2004 to promote his own line of clothing and sports apparel, and he has endorsed various businesses, including the Mexican national lottery.

In 2008 Oscar published his autobiography, ‘American Son’, and finally, the most surprising element of Oscar’s earnings come from his singing career. In 2000 he released a self-titled Latin pop album, containing tracks in both Spanish and English, which was co-written by the Bee Gees. The album was nominated for a Grammy in the year it was released, for Best Latin Pop Album’, and although it didn’t win an award, it has been well-received by music critics.

Oscar De La Hoya has invested heavily in real estate. He owns several huge mansions within the United States, but his main residence until 2015 was a coastal mansion in Bel-Air, Los Angeles. He sold that property for a reported $18.5 million, and since then he has continued to increase his property portfolio, most recently last year when he bought a luxury condo in downtown Pasadena for $2.65 million. The building contains an indoor pool and fitness center, as well as 24-hour security, and Oscar’s condo comes complete with three bedrooms, a library, and a 550 square-foot patio.

In 2005 Golden Boy Enterprises launched Golden Boy Partners, which supports urban development in Latino communities, and in 2008 he donated $3.5 million to the De La Hoya Animo Charter High School. In 2008 a statue of Oscar was unveiled outside the Staples Center in Los Angeles, alongside statues of other sporting greats such as Magic Johnson and Wayne Gretzky, and that year he was also inducted into the United States Olympic Hall of Fame. In 2011 Oscar worked with the USO to visit serving military personnel in Kuwait and Iraq, where he held boxing clinics with the troops. Oscar posts regularly on Twitter about his career, and his promotional activities, on Twitter, where he is followed by 1.8 million fight fans.