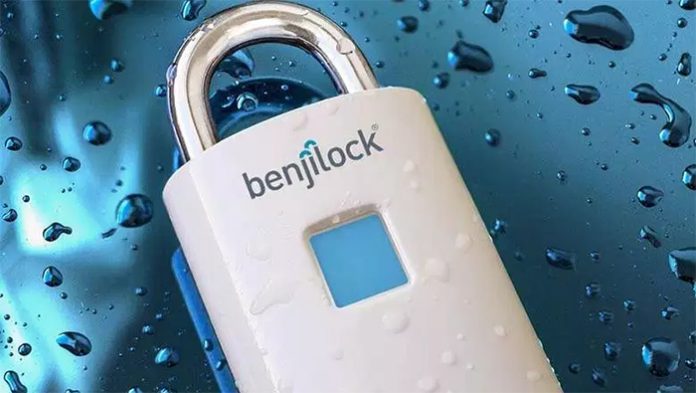 Earlier this year, the BenjiLock returned to the CES convention in Los Angeles, where the product was showcased to many attendees. With their recent partnership with Hampton Products, the company is currently also working on a “Back to School” product launch for this upcoming fall.

The world’s first rechargeable padlock, the BenjiLock’s purpose is to redefine personal security with hybrid technology. The brainchild of Robbie Cabral, an immigrant from the Dominican Republic, he had come up with the idea after noticing that people were having issues with their lock combinations at the gym. Upon noticing that, he wondered—”would it be possible to design a simple lock, one that could be opened via a traditional key and fingerprint?”

Upon searching the internet, he was pleasantly surprised to learn that there was no such product on the market. With that, he was able to proceed with his plan of creating the lock. There was just one problem though—he didn’t have any tech experience. Fortunately, he was able to bypass this by persuading a local engineer to help him with the product. 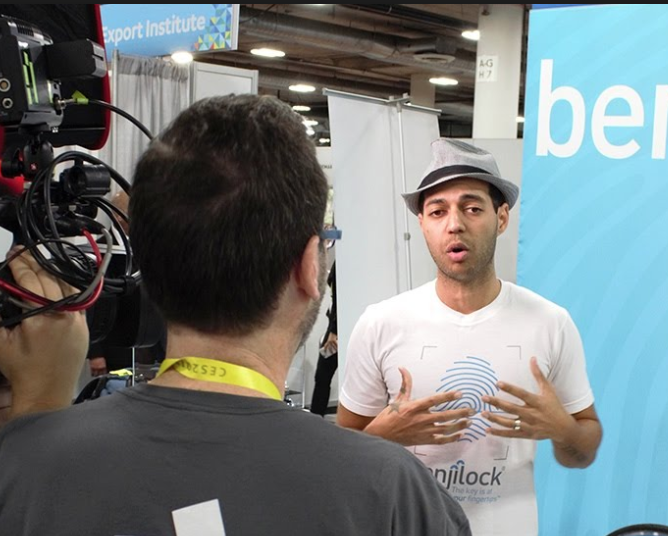 Over the next three years, he continued to keep his dream alive—in doing so, he poured much of his own savings into the project. With a prototype in hand, a friend eventually suggested that he showcase his creation at Las Vegas’ Consumer Electronics Show. Though he initially dismissed the idea, he ultimately decided to go for it after realizing that he needed to jumpstart his business.

The best decision that he’d ever made, Cabral went on to be named a CES Innovation Award Honoree at the event. As the BenjiLock started to gain traction, more and more people started to encourage him to try out for Shark Tank, which coincidentally, was also holding an open casting call at the CES convention.

Despite never having heard of the show, he jumped at the opportunity and ran to their booth. From there, it wasn’t until weeks later that he was told that he had made the cut. In the end, he and the product were featured at the beginning of the show’s ninth season—on October 15, 2017, to be exact. 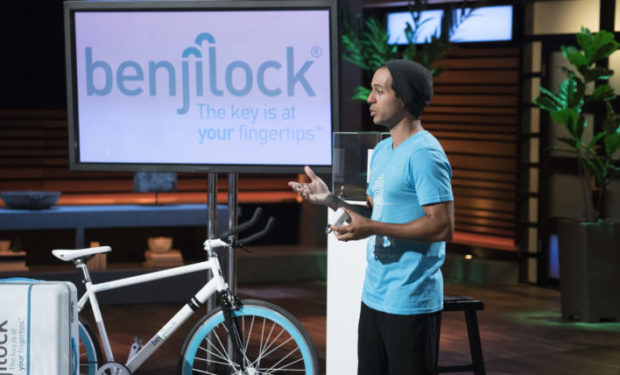 Walking into the set, the immigrant entrepreneur introduces himself as Robbie Cabral. The founder, CEO, and owner of BenjiLock, he states that he has come to the tank in hopes of receiving a $200,000 investment for 10% of his company.

Diving right into his pitch, he tells the panel that he regularly goes to the gym to keep himself in shape and to “release the grind and stress.” Continuing, he says that it wasn’t long before he started to notice stress in the locker rooms—more specifically, people were knocking at their lockers, having forgotten the combination to their lock, or something similar. Having noticed that, he explains that is why he created the BenjiLock.

The world’s first traditional padlock with fingerprint technology, he explains, it can not only be opened with a key, but with your fingertips as well. With a BenjiLock in his hand, he demonstrates the process just seconds later, by putting one of his fingers in front of the device. As the lock opens, the sharks are noticeably impressed. Next, he shows them that it can also be opened with a traditional key, so that “even if the technology fails, you can still open your lock.”

With that, he proceeds to show the sharks the evolution of the BenjiLock—the first item being a dummy version of the lock. Passing the prototype along, the panel gets a feel for the gadget as Cabral tells them that he is currently working on making the product smaller. Curious about the battery usage, Robert subsequently asks him how long it holds a charge, before the key must be used. To that, the creator answers that it can be used for one year after being charged for 30 minutes. 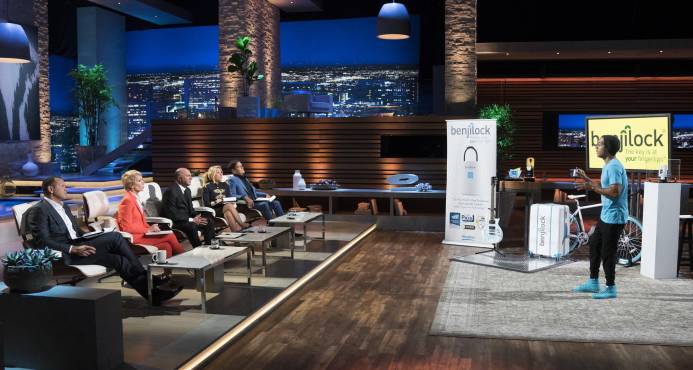 As if that wasn’t impressive enough, Cabral goes on to say that he had just recently gotten his patent granted, which garners a positive reaction from the sharks. Next, Lori comments on a particular award that he won from the CES Innovation competition. Knowing how competitive the event is, she tells him that she is incredibly impressed with the feat.

Moments later, Kevin asks him whether or not the BenjiLock can be used as a patent to replace the core cylinder lock in the standard domestic door lock. With a nod, Cabral tells him yes. From there, Kevin inquires about licensing to which the creator says that he actually already had a lock manufacturer approach him about licensing.

Curious to know the numbers, the shark eventually asks him about the price. In reply, Cabral tells them that he did a survey, from which he learned that 99.9% of participants were willing to purchase the BenjiLock for $60 or more. While Lori quickly realizes that the survey is a tactic from her book, Kevin inquires about the manufacturing costs, to which the entrepreneur says that he can get it for $20 each for 50,000 units.

Moments later, Barbara asks where he got the money to start the project, to which he replies that he is self-funded. As if on cue, Alex subsequently inquires about the amount that he’s put in so far. In response, the entrepreneur tells him that he’s invested $87,000 so far.

Explaining that he was recently laid off of work, he states that BenjiLock is currently his full-time gig. Deciding to tell the sharks more about his background, Cabral states that he was born in the Dominican Republic and had moved to the U.S. in 2007. Despite having landed a job to chase the American Dream, he says with a noticeable shake in his voice, he was laid off just six months later—on the same day as his daughter’s birth.

Speaking about how difficult things have been with tears streaming down his face, he continues his story as the sharks look on. Continuing to speak with great effort, he exclaims that this now is his American Dream. From there, Kevin gives him his first offer—$200,000 for 15% equity, after which he reminds him that he has expertise with licensing.

Disagreeing with Kevin, Lori eventually offers him the same deal—$200,000 for 15% stake. Commenting that what he needs is a team, Barbara is the third shark to give Cabral an offer—$100,000 for 10% stake.

Proud of his work as an individual who was also born and raised in the Dominican Republic, Daymond eventually offers him a deal in Spanish—the same $200,000 for 20% equity, but as a joint effort with Barbara.

Some broken Spanish by the sharks later, Mark tells him that he will be backing out as “he’s not the right kind of person” for the business. Nodding in acknowledgment, Cabral’s attention soon goes to Daymond, who points out that he is the one that he should work with as he speaks his native language and “understands him better than any other shark.” With that, the inventor is stuck having to make a hard decision. 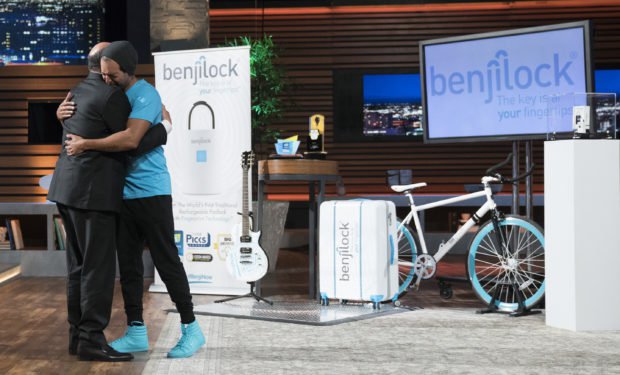 Told that his problem is a “good problem”, the inventor smiles to himself as he once again contemplates his options. Taken aback by what’s been offered, he eventually reveals that his gut is telling him to go with Mr. Wonderful, a decision that shocks the rest of the sharks. Having accomplished what he came to do, he walks up to Kevin to give him a brief hug, as the rest of the panel continues to express their surprise.

Grateful to the point of tears, Cabral gives Kevin a friendly pat on the back, before exchanging a few words with Daymond, who reminds him that he is very proud of him. From there, he briskly walks off the set.

In the subsequent backstage interview, the inventor reveals that he had chosen to go with Kevin as he feels that he is a “strong beast at negotiating and licensing.” While grateful for all of the other offers, he reveals that he had felt “a strong fire” with Kevin, which led him to go with his gut. As the episode ends, he tells the audience that he knows he made the right decision.

BenjiLock in 2018 – The After Shark Tank Update

One step closer to achieving the American Dream, Cabral has come a long way since he was originally laid off from his job. Since the BenjiLock was featured on Shark Tank, nearly ten months have passed. How is the company doing nowadays with Mr. Wonderful’s help?

Not long after the episode aired on television, the product’s popularity exploded. Not only did their website crash from too many visits, but their email inbox was also inundated with fan mail, according to a recent interview with Cabral. As far as licensing goes, it was later also revealed that the company had made a deal with Hampton Products, the makers of Brinks Home Security.

In terms of where to buy the product, however, it would seem that it is not yet available in brick and motor stores. At the time of this writing, the BenjiLock can only be purchased from the official website. For now, it’s unknown whether or not they will be expanding it to other retailers in the country.

Earlier this year, the BenjiLock returned to the CES convention in Los Angeles, where the product was showcased to many attendees. With their recent partnership with Hampton Products, the company is currently also working on a “Back to School” product launch for this upcoming fall. With that said, not much about the new line has been revealed as of yet.

As mentioned earlier, the BenjiLock’s website saw a tremendous increase in traffic after the airing of the Shark Tank episode. That’s not all, however, for the company’s official Facebook page has since also exploded in popularity—more specifically, they’ve since amassed over 18,000 followers. If that is of any indication of their success, we’d say that they’re doing quite well! Not only is the page updated on a regular basis, but it also draws in a considerable amount of interaction from users.

Aside from Facebook, they’ve also established themselves on other platforms such as Twitter, and Instagram. In fact, they’ve already earned themselves over 14,000 fans on the latter! If anything, more and more people are learning about the BenjiLock on the internet.

Will the entrepreneur be returning to Shark Tank anytime soon for an update? Unfortunately, your guess is as best as ours at this point—we might just have to wait a little bit longer to see him on the show again.