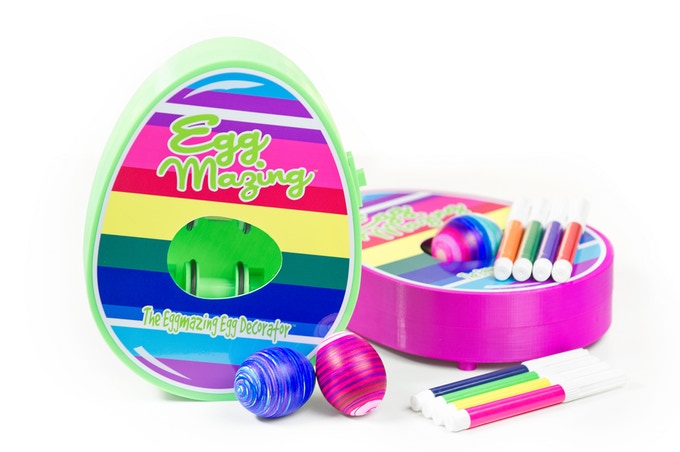 Coming into the Shark Tank is an entire family with a prospect that they hope will be a new holiday tradition. Meet Scott Houdashell and Curtis McGill, founders of The Eggmazing Egg Decorator. However, Scott will be the Easter Bunny for tonight. The two of them are from Amarillo, Texas, and they have come to the Shark Tank to seek an investment of $350,000 in egg-change (get it?) for 7% egg-quity (GET IT?). Since they were kiddos, little baby bunnies, moms and dads and grandpas and grandmas have been using the same old method to decorate Easter eggs.

It’s so smelly and messy that some families don’t even want to bother. However, Scott and Curtis have an egg-cellent alternative that’s no yolk! The Eggmazing Egg Decorator is a new way to decorate Easter eggs. They’ve brought along Curtis’s kids, and some egg-sperts (that’s at least five Easter/rabbit puns now) on how it works. Place a hard-boiled egg in the opening and turn on The Eggmazing Egg Decorator. Grab a colorful marker and let the fun begin. Take a marker to the egg, which spins, and you can make your own colorful designs.

It’s simple, creative, and it really is all the fun without any of the mess. All of the Sharks are caught up in the clever concept of the novelty. Simply put, it’s egg-mazing! Which one of the Sharks wants to step up and invest in their company? Curtis’s children pass out samples to each of the Sharks. Barbara remarks that they’re cute kids, and it’s an ingenious tactic on Scott and Curtis’s part.

Each of the Sharks are given a pair of bunny ears and Robert and Barbara fuss over Robert’s choice of pink. All five of them don the bunny ears, and the kids and Curtis’s wife exit the Shark Tank. Kevin asks how the two of them dreamt of the idea, and Scott explains that in 2015, he was decorating in the kitchen and making a mess with all the vinegar and dyes. He knew there had to be a better way, so he rounded up a hot glue stick and an electric screwdriver and built the prototype. Kevin laughs, as he’s having a hard time taking Scott seriously since Scott is wearing a full-blown Easter Bunny suit.

With the prototype, he balanced the device on a spoon and had Curtis use some markers on the spinning screwdriver. He knew that he had a better mousetrap. But the problem with the business is that it’s very seasonal, Kevin says. He’ll think about it when he’s coloring eggs but forget about it for the rest of time. How can they make any money selling The Eggmazing Egg Decorator once a year? Curtis says that they have thought of this and last year, they went down the journey of two years of development.

They had a container made of The Eggmazing Egg Decorator delivered to Scott’s insurance office. They unloaded all 10,000 of them and did not have anything sold on March 1st. They sold all 10,000 units in 23 days by joining Astra, which is a small American retailer and toy association. They sold all the units to them and let them serve as the middleman, but they found themselves short on supply. Businesses that had called and ordered two cases called back and ordered four more. Then they would order eight, then twelve.

The Eggmazing Egg Decorator continued to go up as demand continued to go up. Barbara asks if the people who didn’t receive any placed a pre-order for the following Easter, and right now they have $1.2 million awaiting in purchase orders. Each unit is $4.71 to produce, which includes the landing cost (shipping and logistics), and each unit is sold to retailers for $12.50. Kevin asks if they are one-way orders, which means that the retailer cannot return them. Scott confirms that they are, and Kevin’s opinion has drastically flipped.

Curtis continues on, saying that only half of the purchase orders are for The Eggmazing Egg Decorator. They have a sister product, which is called The Treemendous Ornament decorator. The two love puns, evidently. The Treemendous Ornament Decorator is a sister concept, but Kevin says that there is no proof of concept with no proof of sales. Curtis coolly says that they have roughly $680,000 in sales waiting in one-way purchase orders.

Robert asks to see a Christmas ornament while Mark asks if this will be their first Christmas with the sister product. It’s very risky and they do not have a full sell-through yet. The Treemendous Ornament Decorator sells for $29.99 and comes with 3 ornaments and 8 markers. Kevin says that he likes what they’re doing with decorating an egg, although there is no tradition to decorate your own ornaments. The price is high, too. 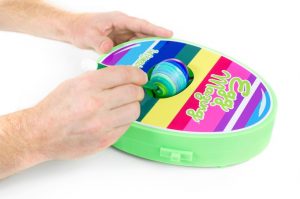 Curtis responds that during the Christmas season, people typically spend way more than they normally do. Kevin then addresses the number of $350,000 that the two were asking for. Since he’s a very, very creative Shark, he extends an offer of $50,000 in exchange for the equity component of his deal – 33% of the company. He’s the third guy over the years, and the $300,000 is a loan at 13% interest. Lori mocks this, and even Robert says “That’s egg-scruciating!”

Kevin demands that Robert make an offer, and Curtis responds that he has three kids. The only thing that he wants for his kids is that they don’t have to eat the crusts off their peanut butter and jelly sandwiches, much like he had to do as a kid (meaning, essentially, that he grew up rather poor). They’ve worked their whole lives to get where they are, and Kevin drops the interest rate to 11% in response.

Barbara disagrees about the Christmas idea. She thinks that the idea won’t fly because it’s very hard to look at the box and get the idea of the spinning wheel in the middle, which is so easy to see in The Eggmazing Egg Decorator’s packaging. However, she extends the $350,000 in exchange for 15%, but half of it comes in cash and the other half comes in a credit line. The interest rate is whatever is the cheapest interest rate she can get from the bank. As long as they have the purchase orders, she has no problems funding anything – especially if they can’t return the products.

Robert says that the two of them definitely have lightning in a spinning bottle and the Easter egg thing is taking off, but he doesn’t see an entire company around it. So, Robert is out of the deal. Barbara changes her offer to $350,000 to be a full loan at the lowest interest rate she can get. She doesn’t know what that number is, but she can get a low number because they love her since she keeps a lot of cash there. She only wants 10% of the business.

Lori then changes her offer to be $350,000 in exchange for 10% equity and a $2 royalty until she is paid back in full. But, she wants to give $1 to any charity of their choice – preferably some type of charity. This way, something good is going to helping kids and she’s getting the guaranteed money since it is a seasonal sale. Mark says that he thinks that Lori is the better deal since she’s more product-driven, but this isn’t the business for him, so he’s out of the deal.

In the end, Scott and Curtis agree to take the deal with Lori.

The Eggmazing Egg Decorator is available through Wal-Mart and Amazon directly, as well as being available to purchase through QVC and some other fringe markets. It still retails for $29.99. The Treemendous Ornament Decorator now sells for $34.99, and the direct supply from the Eggmazing company itself shows that they have 14,944. This is a useful number for comparison of stock – they have 15,000 in July, so how many will they have come Christmas time? Ornament refills are available from Amazon and the Eggmazing website, which costs $12.99 for a 6-pack.

The Eggmazing Easter Egg Decorator has a solid 4.3-star review across more than 403 Amazon reviews. Of course, Amazon Prime shipping can be applied to the order for Prime members. The most important thing to note is that it is highly recommended to not eat the eggs. This breaks some of the Easter tradition, as the hardboiled and dyed eggs are typically used in a meal for Easter brunch/breakfast. This is where most of the one-star reviews are directed, as it’s an important and critical piece of information that was not revealed on Shark Tank. This is because the dye from the markers will seep all the way through to the egg whites, rendering them borderline toxic and unsafe to consume. It’s not recommended to eat the Christmas ornaments for obvious reasons.