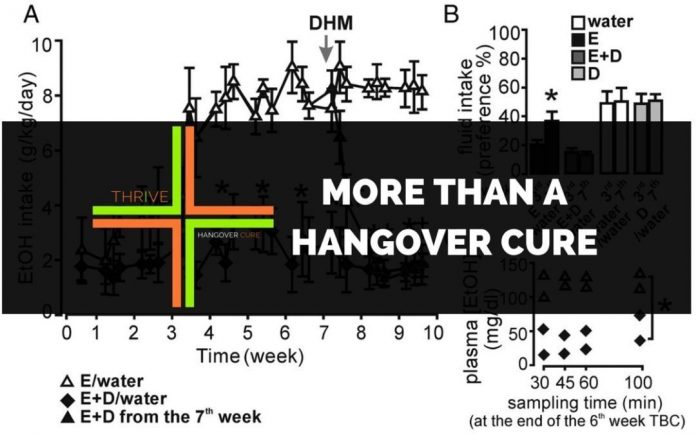 Stepping into the Shark Tank is an entrepreneur with a product that aims to be a cure for everyone’s most dreaded ailment, the hangover. Meet Brookes Powell, the founder of Thrive+. He has come to the Shark Tank to seek $400,000 in exchange for 10% of his company, giving a powerful evaluation of $4 million dollars. Just three months ago, he graduated from Princeton University and started full-time work on Thrive+, the business he had been building in between classes since he was a sophomore.

People use a number of products in their lives to negate the risks and negative effects of activities. For example, when you get into a vehicle, you use a seatbelt. Or if you spend time in the sun, you use sunscreen. But the majority of Americans also consume alcohol regularly. Brookes cracks open a cold one and take a sip. So, why isn’t there a product designed to reduce alcohol’s negative effects?

This is why Brookes created Thrive+. Along with a Princeton professor of neuroscience, Princeton alumni specializing in patent law, and a pharmaceutical manufacturer, Brookes has created the first product ever designed to reduce the negative effects of alcohol. It works primarily by decreasing the symptoms of short-term alcohol withdrawal and giving your liver the enzymes it needs to produce alcohol and other toxic byproducts.

To use Thrive+, simply take 3 capsules before going to bed or after your last beverage. Thrive+ is a healthier and more responsible way to drink. It can even make you feel better and sharper the next morning when you wake up. So, which one of the Sharks wants to thrive?

Robert starts things off without any hesitation – Thrive+ is being advertised as a hangover cure. It’s both a multivitamin and cure for people who drink, Brookes says. He passes out samples to each of the Sharks, including guest Shark Bethenny Frankel, and mentions how he knows that Mark Cuban hates supplements. He doesn’t like investing in them, mainly due to the claims of the multivitamin.

Bethenny mentions that you need to be in college to read the back of the bottle – the writing is super small. Mark says that he does not see anything in the formula that’s unique, but Brookes says that the key component is the dihydromyricetin. Mark has a rule – the longer the backstory, the more bull in the deal. Robert asks to let Brookes finish, and Brookes explains further.

In Asian countries, they would steep the dihydromyricetin in tea to make them feel better after consuming alcohol. Neuroscientists wanted to see if there was any scientific evidence, and they found that when they injected this dihydromyricetin into rats, they could instantly sober up rats and prevent them from becoming alcoholics. Lori asks for more information about the case study – how many rats and how long was the case study?

Lori instantly gets made fun of by all the Sharks, with Daymond asking how many rats she hangs out with. Truthfully, Lori has a good point when it comes to the accuracy and quality of the study. The study was funded by a $2.5 million government research grant, and the journal was in the journal of neuroscience. If you can get published in that, that’s the height of your career, Brookes says. This is why Big Pharma chose not to go after the chemical since it’s naturally-occurring and organic compound that they can’t get an intellectual property on.

Bethenny asks if she can go on and do that, and Brookes continues further. He’s reading it as it’s being published, so he runs to his neuroscience professor. With the help of the professor, who grew increasingly excited, he reached out to an alumnus of Princeton who specialized in chemical patent law. The alumnus said that if Brookes could combine the dihydromyricetin with other ingredients, you can patent a formula. This is now better than the competition.

Mark asks how Brookes proved the formula was more effective than the molecule itself. They hosted a human study, but there is a problem with dihydromyricetin. It has a bio-availability of only 4%. This means that you can take 1,000 milligrams (which is how much is in a capsule of Thrive+), but you’ll only receive 4% (40 milligrams) into the bloodstream. There are only a few labs in the world, one of which is at Princeton. They made nanoparticles, which unlock the bio-availability problem and… Daymond has a good question. Will the phone calls always be this long?

Mark wants to get into the reality of things. Using the technology that Brookes licensed from Princeton is how Thrive+ will deliver the dihydromyricetin at a much higher level. Nailed it, Brookes says, and Mark knows. Bethenny is lost since it’s a very long and confusing presentation. She’s not a scientist, but she wants to know more about who he’s marketing to and the success of it. Mark insists that this won’t matter unless they know every last asterisk about the product’s legitimacy. However, Bethenny says that it does matter because just by looking at the packaging, she doesn’t know who it’s marketed towards. Is it marketed towards 20-year-olds or alcoholics? 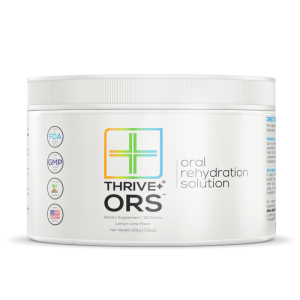 Mark tries to say that this is all B.S., but Bethenny says that vitamins and supplements are all bull. It’s all about the packaging, not the ingredients that are the same in any other product. Mark returns to business and says that his B.S. meter started going off when Brookes said nanoparticles. Saying nanoparticles is more impressive, although Bethenny says that she runs when she hears nanoparticles. The point is that nanoparticles for delivery are not something that’s exclusive to Princeton or anybody. There are a thousand different companies that do it, and some of those may own intellectual properties on how to do it, but there’s always alternative ways.

Brookes insists that Thrive+ is locking all of those down, but it’s too late and the damage has already been done. Mark is the first Shark out of the deal. However, Robert says that a classic Cuban Heist has taken place because he did an awful job by letting Mark take over the presentation. Robert never had a chance to learn anything, so he’s also out of the deal, leaving just Bethenny, Lori, and Daymond. Bethenny concedes that Robert makes a good point, as every time she tried to ask questions, Mark shushed her. The Sharks begin to bicker that Mark hasn’t stopped talking, but everyone had the chance to learn something. Mark just says that Bethenny shouldn’t interrupt him, but the truth is that Mark hasn’t stopped talking.

Bethenny says that she’s in the alcohol business, but does not know who the product is for. The majority of the customers are between the ages of 35 and 55. This is kind of Bethenny’s target audience. Unfortunately, when Thrive+ is on a shelf, which it isn’t, it’s hard to tell exactly what the product is for. Thrive+ is currently not available on shelves and is only available online, which Bethenny says is a beautiful and crucial piece of information for the Sharks to know. Brookes doesn’t intend to go to retail for 2 to 3 years because you need ads for that.

Bethenny wants a product that anyone can understand, but the marketing in the business is super difficult. She’s out of the deal, as well. Daymond’s biggest challenge is that Brookes mentioned the advertising on TV and radio. It’s a massive amount of money to spend, all in a very crowded space, to get people to understand the product. It’s a very long journey, so Daymond is out.

The problem for Lori is that it’s very early for her. Brookes has a lot of testing to do and to prove the product before she could comfortably invest in the product, so she’s out of the deal. With that, Brookes leaves without finding an investor for Thrive+. Truthfully, it was a bloodbath in there and a Shark investor could have sped the timeline of the business up exponentially. 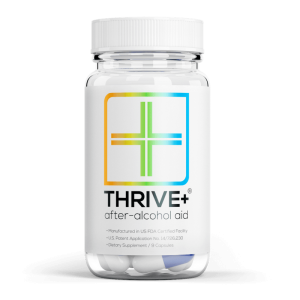 Robert asks Mark if he gets a science credit for that class, and Bethenny says that it’s not Shark Tank, it’s Mark Tank. Mark defends himself, saying that with everyone watching, they don’t want to get into the details to get ripped off. The premise of the show is the business aspect, not the science aspect. The Sharks do their due diligence after the fact, and Robert assigns a certain level of credibility.

Robert brings up a great point – whoever is pitching to the Sharks has to control the room. With that, the segment closes.

Thrive+ is now being advertised as “Thrive Global.” The most telling sign of the product’s success is the highly critical 4-star average review on Amazon across more than 327 reviews. A 30-capsule bottle costs $34.99, although bulk discounts are available for buying 2 or more bottles. You can also earn 10% off by setting up a subscription with a minimum of two months purchase.

The recommended dosage is 2-4 capsules, with it being highly recommended to take the capsules after your last beverage. Some people have claimed that the capsules did not work, but all of these reviews seem untrustworthy. One such review admitted that the capsules did not work for his binge drinking session, which was considered to be 5 or more beers. The reviews that claimed the product worked say that they felt good enough to get right out of bed the next day and even continue drinking. The capsules work best with wine and beer, but higher content alcohol (harder spirits and liquor) are not recommended.

The proprietary component is being reproduced (Dihydromyricetin) and sold for cheaper, and many of the reviews on the cloned products are highly receptive. With that said, Thrive+ has begun to produce other supplements such as an oral rehydration solution (for use with smokers, recommended to take 2 capsules after your last cigarette of the day), and even importing things like Japanese domestic foot massagers. Thrive+ seems highly committed to enhancing everyday life with some interesting supplements and treatments.