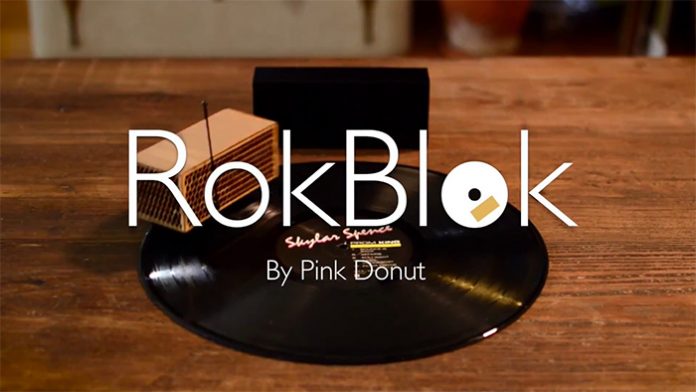 The world’s smallest, wireless record player, RockBlock is capable of playing your favourite records simply by riding on top of them. Not only can you enjoy music through its built-in speakers, but you can wirelessly sync it to any Bluetooth device for a bigger sound. Indefinitely portable at only 4 x 2 inches long, it can easily be taken with you on-the-go, so that you can listen to your favorite tunes anywhere.

The brainchild of Logan Riley—a former Creative Education Lead at Apple, the RokBlok was put together as a product for his company, Pink Donut. Tired of not having control at his previous jobs, he had decided to launch his own startup in 2015. An idea company, that is, one that creates products with no set genres or medium in mind, it eventually gave rise to its first creation—an app called LookFor, which allowed users to find their friends in dark areas such as movie theatres and festivals. A major hit, it ended up being featured in several publications including Yahoo and TechCrunch.

From there, he eventually came up with an idea for a hardware project—a small, wireless speaker that can play vinyl records. A portable alternative to records players, it would take up significantly less space in one’s home. With his goal set, he spent $2,000 on materials and began to tinker with the first prototype. Many hours of hard work later, he had developed a gadget that was able to spin and sing smoothly.

In need of more funding, Riley launched a Kickstarter campaign, something that he was familiar with as he had previously used it for fundraising. Launched in December 2016, the Rokblok project quickly proved to be a hit. Within just a few day’s time, they had reached their goal. By the time the campaign ended, they had raised over $351,000.

The following year, another opportunity came knocking on their doors. In 2017, it was announced that the inventor would be pitching the product to a panel of multi-millionaires on ABC’s Shark Tank. Featured in the ninth season, the episode later aired on December 3, 2017. 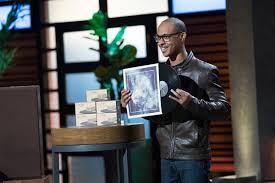 Walking into the tank, Logan tells the sharks that he is the founder of an idea company called Pink Donut. Holding a vinyl record in his hand, he goes on to say that he is seeking $300,000 for 15% of his product, RokBlok.

Pulling the contents out of its sleeve, he begins his pitch by asking the sharks whether or not they remember vinyl records. Reminding them that records have been used for over 120 years, he spends the next couple of minutes highlighting the beauty of the analog disc. As amazing as the experience is, however, he explains that they do have a drawback—that is, they require a turntable, and a good pair of speakers.

Revealing that he’s found a way to make it all portable, he takes out a small gadget from his jacket and introduces it as the RokBlok. The world’s first, wireless record player, he goes on to demonstrate how to use the product just seconds later. Turning it on, he places it on top of a readied record. From there, he explains that it will begin playing as soon as the lever is turned up.

As if by magic, the music immediately begins to play as the RokBlok circles the record. Amazed, the sharks can’t help but look at the product in front of them. Continuing his demonstration, Logan subsequently explains that it can be stopped by placing your hand on top of the RokBlock. 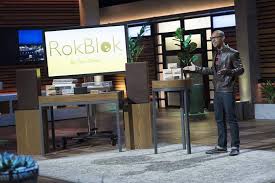 Noting that some people might like their music a little louder, Logan goes on to tell them that it can be synced to any Bluetooth speaker or headphones. Demonstrating just that, he connects the gadget to a speaker on the table, after which music begins to fill the room. To that, the sharks are once again amazed.

Highlighting its size, the inventor lets them know that it can easily be taken on-the-go, with a battery that can last for many hours on a single charge. Curious, Mark asks whether or not it can be used on any surface, to which Logan says yes—though he recommends placing something underneath it, such as a non-slip mat.

As he hands each of them a sample, Lori asks whether or not it’s capable of playing any type of vinyl, to which he tells her its plays everything except 78’s. From there, the sharks go on to examine the product in their hands. Curious about its contents, Kevin soon asks the inventor whether or not there is a traditional phono cartridge in the RokBlok. Upon being told yes, he inquires about the sound quality via Bluetooth.

In response, Logan admits that there will be a loss in quality as Bluetooth compresses the sound. Continuing, however, he states that the difference is minimal. Just as he finishes, Mark questions why anyone would want to take their records with them on-the-go. In reply, Logan states that the RokBlok can be a good alternative for those who do not have enough room in their home for a turntable. Giving a personal example, he tells him that he does not have ample space for a proper setup in his small apartment.

Though Mark comments that he is shrinking his market, Logan tells him that the market is in fact, growing. “Not just for audiophiles”, he explains that the RokBlok can serve as an entry to getting into records. Confirming, Robert states that the product is for those who cannot afford a record player, which Logan agrees with. Despite that, however, Mark remains unsold on the idea.

Wanting to know more, Barbara subsequently asks about the RokBlok’s pricing, to which she is told that they retail at $99. Elaborating further on the numbers, Logan states that it costs $23 to make. With further prompting by Robert, he reveals that he’s done $350,000 in sales through Kickstarter, in addition to $60,000 on the side. Asked whether or not he’s delivered any of the products yet, he tells them that “production is underway as we speak.” 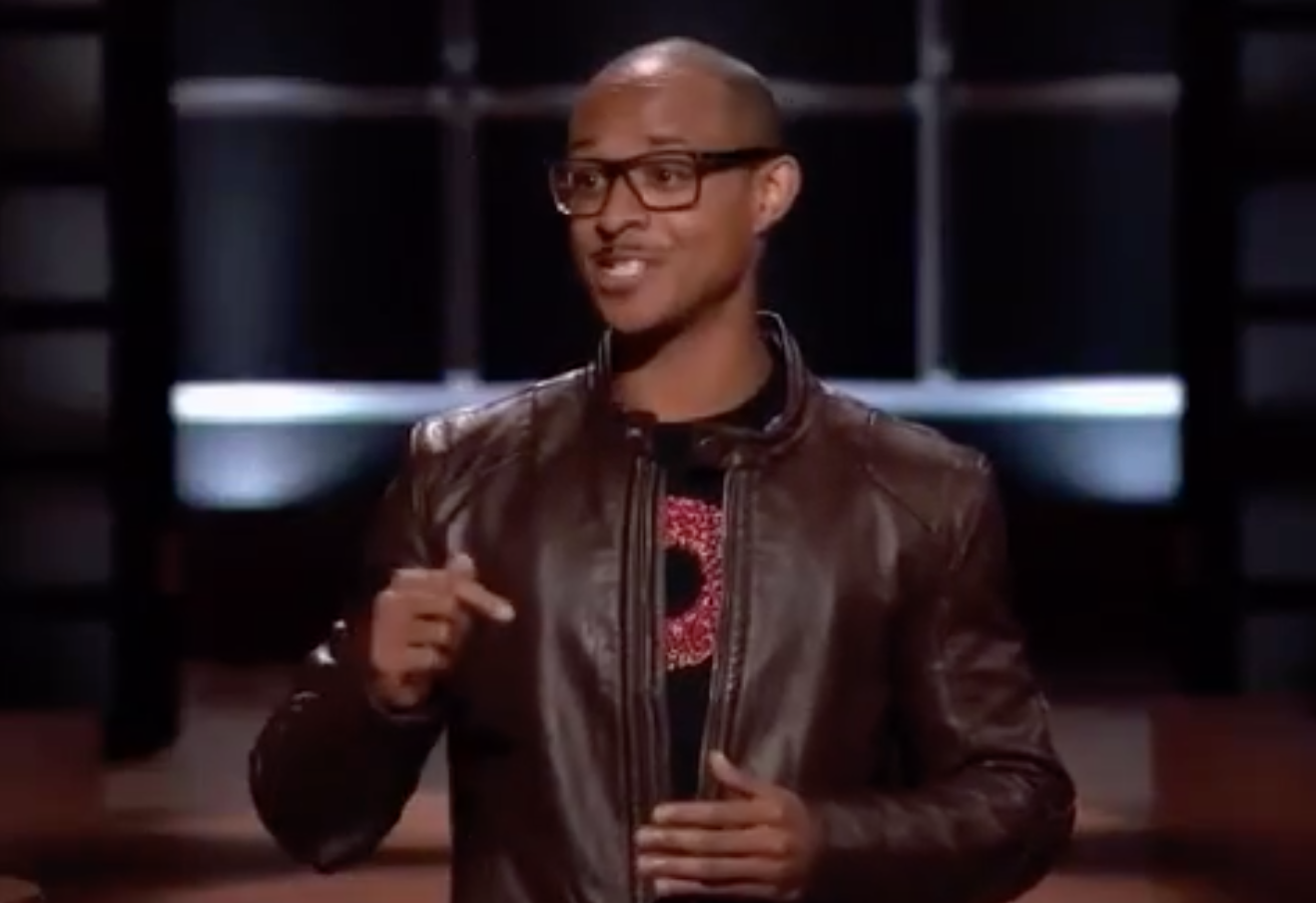 With that, Kevin appears concerned as that they’ve yet to receive any feedback on the project. Though he agrees, Logan says that he is confident in the product, as he is an audiophile himself. From there, Mark asks him about his funding, to which he states that he’s put $2,000 of his own money into the project, which surprises he sharks. Elaborating, Logan explains that he had spent the $350,000 from Kickstarter on the item’s production costs. Continuing, he reveals that he had actually slept in front of the manufacturer’s office in China for two months as it was being developed.

Moments later, Lori asks him how he came up with the idea. A big fan of records, he explains that he’d come up with it after realizing that his apartment was way too small for a proper turntable setup. Wanting a way to share his vinyl discs with his friends, he took it upon himself to make something portable that would be able to play records. Putting ideas together, he eventually thought up creating something that could sit not below, but above the record.

Revealing more about himself, Logan tells them the Rokblok is in fact, the first hardware project that he’s created after teaching himself engineering on YouTube. Almost immediately, the sharks are impressed. With that, Lori asks whether or not he has a patent on the project. In response, he states that he has a utility patent which covers the wireless transmission audio. Asked more about his background, he explains that he used to run an audio studio when he was nineteen.

Noting that it’s “way too early”, Barbara eventually backs out of a deal. Almost immediately afterward, Mark makes a comment about the Rokblok’s limited market. Stating that he’s not a fan of working with “perpetual inventors”, the shark soon also drops out. Thanking him for his time, Logan subsequently gives the rest of the panel his attention. 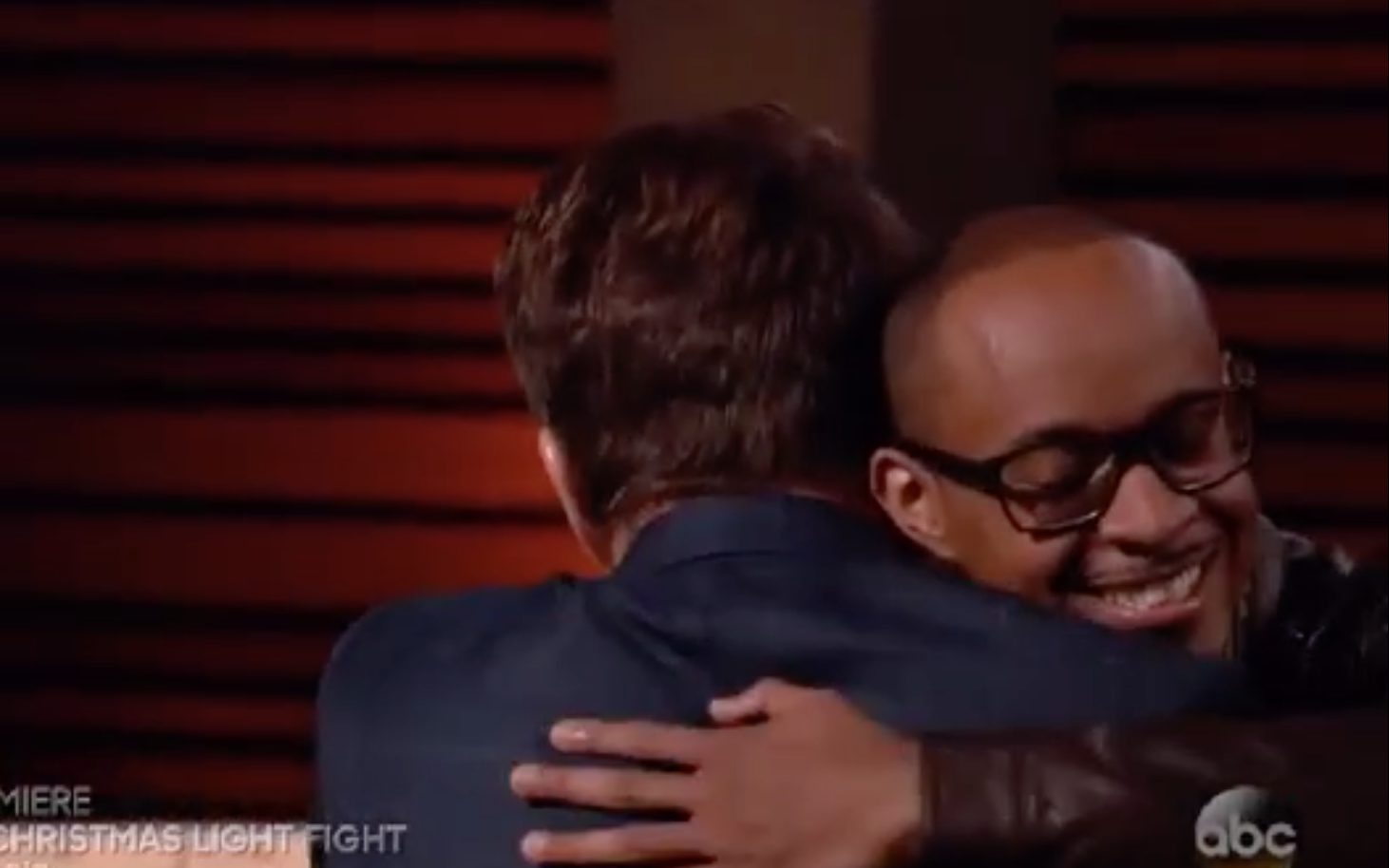 Noting the risk involved with the product, Kevin decides to make him an offer—$300,000 for 50%. Thanking him for the offer, Logan states that he’d like to know what the rest of the sharks are thinking before considering the deal. To his dismay, however, Lori tells him that she is on the fence due to its niche market. As if on cue, Robert immediately says that he is interested just seconds later. Complimenting its design, he goes on to make him a different type of offer—$500,000 for 100% of Rokblok, a 2-year job contract, as well as a royalty of $5 per unit.

Just as Mark begins to talk Logan surprises everyone by taking Robert’s offer. Having finished the deal, the two eventually come together for a brief hug, before he leaves the tank.

More than half a year has passed since Logan agreed to sell Rokblok to Kevin for $500,000. How is the product doing nowadays?

After the episode aired, there was a gigantic increase in both traffic and orders, according to a recent interview with Logan. More specifically, orders had gone up from three to four units a day to 100 to 200 units a day. In order to keep up with the newfound demand, and to manage their day to day needs, they also added a few more staff members to the team.

In terms of what they have on the horizon, it has been announced that they’ve started to partner up with musicians and other organizations for various projects. Of course, they will also be continuing to look for new ways to showcase the product, as well as the beauty of vinyl.

From the looks of it, however, the Rokbloks currently appear to be sold out. For those who are willing to wait for the next shipment, the company is offering a $10 discount on the item.

What Customers Think About the RokBlok

Despite the strides that they’ve been making, it’s probably worth mentioning that there was somewhat of a recent backslash on the product on Reddit. More specifically, many had begun to diss the RokBlok after a video was posted—one that demonstrated its “dismal audio quality.” Afterward, many owners also chimed with similar statements. Nonetheless, there are still a number of users out there that believe that there’s a budding market for the music gadget.

Over the past months, RokBlok has earned themselves a decent fan base on social media. To be more specific, they’ve since gained over 2,500 followers on Facebook. For the latest news and announcements, however, you’ll want to head on over to their official website.

Will we be seeing Logan back on Shark Tank for an update anytime soon? Unfortunately, only time can tell for now. If anything though, the product generally appears to be doing fairly well.