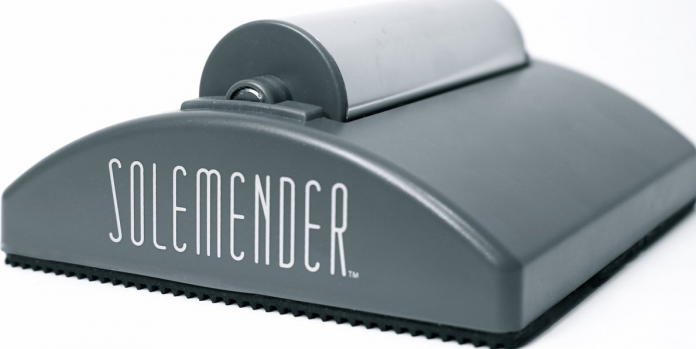 Ehan Kamat came up with the idea for his foot pain treatment, Solemender, when he was only 12 years old. He was tired of seeing his mother suffer from plantar fasciitis, which affects the tendons along the bottom of the foot. She usually treated the affliction with a frozen water bottle. This was not ideal as it could explode from the pressure, or simply roll away when being used. Ehan worked with his father, who is an internal medicine physician, to develop a prototype for the Solemender. Over the years, Ehan won many awards for his invention, such as the 2015 Start-Up Weekend St Louis. He won the grand prize in that contest. Let’s see if the Sharks would be as impressed with the young entrepreneur. 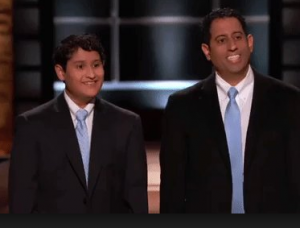 Ehan Kamat and his father Vinay walked out into the Shark Tank and faced the Sharks as they stood on the stage. Ehan introduced both of them. Both of them were wearing matching suits with a white button-up shirt, and blue ties. Ehan said that they were from St. Louis Missouri. They were here to promote the Solemender. Ehan said that they were seeking $75,000 in exchange for 10% of the business.

Ehan started off his presentation by telling the Sharks that he knew a thing or two about the pain. He got up for school at 5 AM every morning, where he took a long day of AP classes, spent some time in the robotics lab, and then went home to tend to his hydroponic garden. He said after all of that “his dogs were barking.” This elicited a laugh from the Sharks. Ehan continued, stating that he thought the Sharks could relate.

His father, Vinay, said that they’d been looking for something portable that could offer quick relief for feet in pain. Ehan said that he invented the Solemender which he called an innovative solution to alleviate for pain. He addressed Barbara and said that as a waitress and a real estate agent, she would’ve experienced some foot pain. He requested that she come up to the stage to try out the product. Barbara agreed as long as she got some kind of massage out of it.

Ehan directed her to sit in the chair where he had something set up for her already. He told the Sharks that he was about to pull the frozen roller out of the freezer. He presented it to his audience, and then snapped it into the base. Ehan explained that getting relief was as easy as rolling ones foot on the Solemender. He told him that they should perform this task twice a day for a total of 20 to 30 minutes for maximum foot comfort.

Ehan asked Barbara if she felt the cold. Barbara let him know that her foot relaxed almost immediately when she used it. She seemed surprised that she really felt refreshed. Ehan explained that what his product was doing is combining cold and massage therapy into one device. The stainless steel roller had a proprietary gel pack inside. Ehan asked who was ready to help them mend some soles as he ended the presentation.

After he ended their presentation, Ehan said that he had some samples for them that he had pulled down in the freezer. All of the Shark seemed pretty excited about that. On his tray, there is a piece of packaging that would show the Sharks how that would look like in the stores. Ehan claimed that the Solemender would reduce inflammation and repair micro-tears in the tendon that ran across the bottom of the person’s foot.

Alex Rodriguez, more commonly known as A-Rod, was the guest Shark for the episode. He wanted to know how old Ehan was. Ehan told him that he was 17. All the Sharks seemed very impressed. Lori noticed that the packaging mentioned plantar fasciitis, and requested that Ehan explained to her what it was and why the product helped it. Ehan reveals that plantar fascia it is was when you get small tears in the tendons along the bottom of your foot. He told her that 2 million people per year come down with the condition, and his mother was one of those people so he was very familiar with it.

Ehan said that he hated seeing his mother in pain so he was determined to find a way to help her. He mentioned that most doctors recommend freezing a water bottle and rolling your foot on it to deal with the pain. Ehan said that water bottles are tricky as they tend to explode when frozen. He wanted to come up with something that was easy to use that would also help them alleviate foot pain.

Ehan said that he came up with the idea for the Solemender, and brought it to his father who was an expert on plantar fasciitis. When Mark Cuban asked why his dad was an expert, Vinay responded that he had been an internal medicine doctor for the last 20 years. He said that his wife is a rheumatologist who deals with musculoskeletal disease and rheumatoid arthritis. Both of Ehan’s parents said that he had a great idea, but it must’ve been done already. Vinay said that it hadn’t been attempted yet.

Mark Cuban told him that he and the Maverick basketball team that he owned use marbles for their feet pain. Vinay nodded and said that other people use golf balls, coffee cans, as well as other things. Alex piped up, stating that he thought that he’d found their first client. One of the other players that he works with sits for an hour each day trying to tame his foot pain.

Barbara asked Ehan what his sales were. Ehan explained that they had sold $25,000 worth in just under a year. He did not himself by going door to door and talking to a bunch of different people. He said that he also had 11 retail stores that were interested in selling the Solemender. Barbara wanted to know if the stores had reordered them, and he and his father Vinay both said yes. Ehan said that the stores reordered every 1 to 2 weeks depending on how sales were going.

Barbara wanted to know how much the Solemender was going for since they didn’t give them a price yet. Ehan told her that it sold for $39.99. Vinay cut in, stating that the landed cost was $10 but once they were able to up production they would be able to take that cost down. Kevin said that the biggest challenge that he saw was finding a number of people to purchase it to get the customer acquisition cost down. Kevin said that not everyone would want or need it, but the people that do would really want it.

Vinay agreed, and see that 2 million people experience plantar fasciitis each year. Alex Rodriguez spoke up, stating that he was very impressed with what Ehan was able to do as a teenager. Alex asked him what he wanted to be when he grew up. Ehan answered that he was currently experiencing the best moment of his life. He said that he had watched Shark Tank since he was eight years old. Alex wasn’t done questioning him. He wanted to know where he was going to school for college since Ehan was already a senior.

Ehan said that he wasn’t sure if he wanted to go to college. He said that if he could get his business to where he wanted to be, he would be 100% committed to it. Kevin and Mark both said that it was a terrible idea. Mark said that learning accounting, finance, and marketing were very important. He said that the more knowledge that he hung would be able to put together, the quicker he would be able to make decisions. Kevin saw that as a dilemma. He wants to know what was going to run the business while he was in school. Mark said that it would be easy for Ehan to run the business off of the web and hired a salesman to go around and go to doctors offices.

Alex said that the only way out of the “hood” is to get an education or hit home runs. Kevin O’Leary said that he wants to get down to the core issue. He wanted to know what specific knowledge Ehan had about the business that would help an investor assist them in acquiring customers. Vinay said that the problem will be solved by getting into more retail stores. Ehan said that they did have a website, but Kevin said that was more important than that. Kevin went out.

Barbara wasn’t excited about the product, even though she thought Ehan himself was great. She decided to go out. Lori said that the product wasn’t right for her either. She told Ehan that he was going to go very far in life, but she went out. Ehan tried to plead with her to stay in. Mark told Ehan that he reminded him of a younger Mark Cuban. He saw him as having a lot of drive to succeed. Unfortunately, Mark also said that he would be devastated if Ehan did not go to college. Mark said that he would be able to do everything out of his dorm room while still learning all the skills he needed to be successful in business. Mark went out. Alex was also out.

Alex said that he was conflicted because he invested in jockeys, not horses. He saw Ehan as the ultimate jockey. However, he strongly felt that Ehan should go to school because that’s what he would recommend that his daughters do in the same situation. He cited that is the reason for him going out. He looked disappointed but thanked the Sharks. Lori told him not to be discouraged. Alex told him that he would give him his card, and Ehan could contact him once he was out of school.

Ehan and his father walked offstage. In the interview after the episode, Ehan said that what Mark had said made sense to him. He saw the idea that knowledge was a competitive advantage as something that he should take to heart. He decided to pursue moving into college. He saw the experience of being on Shark Tank as one of the greatest of his life, and he had a lot of good advice that he could act on just from that one day.

Solemender Now in 2018 – The After Shark Tank Update 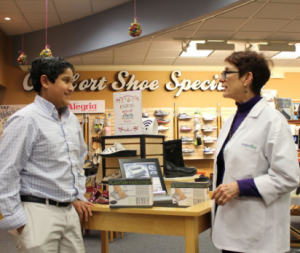 After appearing on Shark Tank, Ehan and his father posted that they ran out of their first run of the Solemender, and they were waiting on the manufacturer to make more so they could fulfill the rest of the orders that came flooding in after their Shark Tank episode aired. They started selling the item to many professional athletes, such as Jasmine Blocker, who participates in track and field on an expert level. They have received mostly rave reviews on their Facebook page. Fans are impressed by both Ehan’s ingenuity as a teenage entrepreneur, and the product’s ability to decrease their foot pain. According to their website, they are working on securing a patent. If you’d like to pick one up for yourself, just click here to make a purchase on their website.