The idea for Coco Taps came about in 2013. Vinny was not a fan of coconut water until a friend from an island country introduced him to drinking right from the coconut itself. He made it a regular part of his post-workout routine, using dangerous methods of opening the coconut like knives or hammers. He ended up breaking a knife that belonged to his stepfather, and that was the point where he concluded that there must be a better way.

Vinny spent a large part of the next two years coming up with the Coco Taps. He poured his blood, sweat, and tears into making the best Made in the USA product that he could. He figured out the patent, design, and manufacturing process. He made a ton of money by partnering up with casinos in Las Vegas to sell pre-tapped coconuts. This led to making $250,000 in under a year. Let’s see if the Sharks would be as impressed with Coco Taps. 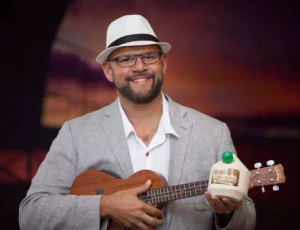 The Coco Taps presentation starts off with the entrepreneur walking out onto the stage in his Hawaiian shirt and lei. He had a pretty hula girl next to him who was carrying extra neck decorations, and he played a song on the ukulele. The man was singing about coconut water. The song stopped soon after he reached’s his area on the stage. You could tell he had already gotten the Sharks attention.

The entrepreneur greeted the Sharks with a hearty “Aloha!” He introduced himself as Coco Vinny from Long Beach, California. Vinny referred to himself as the founder and chief coconut in charge at Coco Taps. He requested $150,000 in exchange for 10% of what would be their company. Vinny began the main presentation by asking the Sharks to close their eyes for a minute and imagine that they were on their very own Hawaiian coconut plantation where the birds were singing and the sun was shining. Vinny said that the best part was the freshly tapped coconut in their hands. He gestured to the woman on stage and said that Coco Rey-Rey would help him get the Sharks all tapped in. Rey Rey passed out the leis while Vinny handed each Shark a coconut with a straw in it. He referred to each Shark as Coco and then a nickname. For example, Lori was Coco Lolo.

Vinny was off to a great start. The Sharks were clearly charmed. Vinny continued, stating that drinking coconut water additives can send plastic bottles tasted stale. It clearly wasn’t up to the same standards as fresh from the coconut. He thought that they could all agree that drinking coconut water fresh from the source is the best way to relax and hydrate. He said that they’d all seen crazy ways to open a coconut – between the banging, chopping, and hammering, someone could literally lose a finger. He said that there were some crazy tools for coconut opening that were pitched right in the Shark Tank. He claims that his product was different because it was the only 100% made in the USA coconut water system. It allowed users to quickly and safely tap a coconut.

Vinny offered to show them how it worked. He went over to a table on the stage where he had everything set up. He illustrated taking the Coco Tapper and making a hole in the coconut. He took the Coco tap and threaded it into the coconut counterclockwise. He said that the and of the Coco Tapper was like a ranch. Vinny said that once the tab was secured into the coconut it was fully sealed. He explained that their lab results showed that the freshly tapped coconut was last in the refrigerator for a full four weeks. Vinny said that his ultimate goal was to get everyone in on the Coco Tapper. All the Sharks had to do was say yes and they could start bringing in boatloads of Coco cash.

Barbara wanted to know what his sales were like. Vinny told her that they had made a quarter of $1 million within the first year. When Mark asked how long ago that was., Vinny let him know that it had been in January 2016. He said that they were trending to do double that amount in 2017. Robert wanted to know what exactly the product was if it was just the tap. Vinny told him that they were two different products, the do-it-yourself tap kit as well as a finished coconut drink. Vinny said that the tapped beverage line was in 20 resorts over the Las Vegas strip. Robert wanted to know how the breakdown when between the two products. Vinny told him that 80% of their sales were in the beverage and 20% came from the kit. Mark wanted to know how often Vinny had to go to the Las Vegas strip to replenish the tapped drinks.

Vinny told him that they were delivering on a daily basis. Robert wanted to know how much Coco Vinny charged for his products. Vinny let him know that there cost per case was $27 and that was with everything included. They charge $45 per case to the businesses. Mark asked how many cases they usually delivered and Coco Vinny let him know that the minimum order was between five and 10 cases. Mark said that that was about $90 to $180 per customer on the delivery. Vinny agreed. Lori asked about Vinny’s background and wondered where he came up with the idea. Vinny said that he was a 5 foot five Mexican Jew, which made him a problem solver. He had been a fat kid and had been challenged by his weight. He ended up losing 75 pounds after he took the initiative.

Eventually, one of his friends had him try coconut water even though he wasn’t a big fan of it. Having it come fresh from the source made all the difference. Vinny ended up trying to use a hammer and a knife to cut open the fresh coconut every time he was about to go for work out. He said that he ended up breaking his step father’s knife, and need to come up with a different solution. He ended up coming with the coconut tap in the toolkit. He said that took him a year or two do the research and development everything was made in the United States and he ended up beating China on their price. He said that he also got patents, and had it manufactured. Pun intended, Vinny saw an untapped market.

Vinny said that 60% of 24 million cruise passengers per year are drinking coconut water. Mark said that finding customers wasn’t the challenge for him. His challenge was managing the delivery service. He wanted to know how Vinny planned on scaling. Vinny said that different markets were already calling him all over the world. The guest Shark, Rohan, wanted to clarify whether the resorts were calling Vinny for a fully completed coconut, or for the tap. Vinny said that it was both. Robert asked if Vinny created the tap to help the coconut business. Robert saw it as two separate businesses. Vinny said that the reason that the tap business was only 20% of their sales is that they just let it organically live on Amazon. For the moment, they didn’t spend a lot of time marketing the tap. Vinny said that with Lori’s help, they could do an infomercial on QVC and rock the world on it.

Vinny then addressed Barbara. He said that with her help, they could start a franchise. The other Sharks started getting confused. They saw it as having too many businesses Mark didn’t feel like he was getting a straight answer, and he went out. Vinny said that he was sorry that Mark felt that way and wished him Coco love. Robert told Vinny that he was drowning in opportunity. Robert said that every time he took a sip of his coconut, Vinny had spurred out an idea for a new business. Robert said he was unable to follow the bouncing coconut, so he was out. Barbara told him that she felt that the coconut drink had too skinny of a margin, and she wasn’t interested in it she held up her coconut tap. And said that she could get behind that one, but she felt it was too early in the business. Barbara went out. Lori said that she understood the love of the coconut, but it was too niche for her. She thought that if she invested in the business she felt like she would be Coco-nuts. She went out.

Rohan was the only Shark left. He told Vinny that he had a fantastic tasting product. He told him that he had a wealth of opportunities, but what Vinny was really lacking was the focus. Rohan said that he didn’t hear the main focus of the business or a coherent game plan during the presentation. Vinny tried to keep him in the discussion, but Rohan went out. Vinny thanked all the Sharks and wished them Coco love. He left singing the same song that he came in with, Rey Rey at his side.

Coco Taps Now in 2018 – The After Shark Tank Update 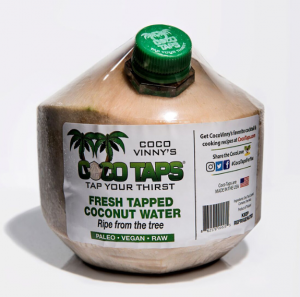 Even though Coco Vinny did not get a deal on the Shark Tank, he didn’t lose hope. He’s been continuing to ramp up his business in the casinos in Las Vegas. He constantly shares motivational posts on the businesses Twitter and Facebook accounts. The coconut toolkit is still available for sale on their website, but the fresh coconut delivery and 10 pack of tabs both sold out. They pitched their business idea to the original shark, Kevin Harrington. Coco Taps did a Las Vegas vendor show for the first time in August 2018. On July 24, 2018, the business Facebook page announced that they would be opening the Coco chill lounge in Vegas. Once it opens, it will have food and live music as well as the famous freshly tapped coconuts.