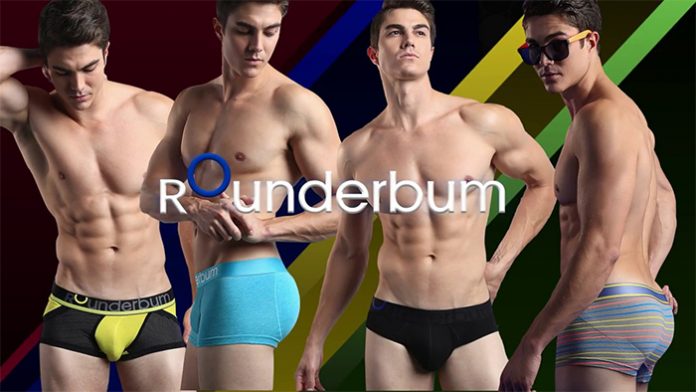 An undergarment company, Rounderbum is noted for their men’s line, which is specifically created for those who want to look more athletic and attractive. Body enhancing, their products are designed to make every man feel and look more confident. Not only do their garments conform to every body shape—thanks to its Padded Technology, but it also utilizes other technologies to lift and dine the muscles with a discreet and subtle effect, according to their website. Designed to be seamless, their briefs range anywhere from $20 to $29. Some of the other items that they offer include shirts, trunks and boxers.

Established in 2015, Rounderbum is the brainchild of Jonathan Diersing. A University of Southern California graduate, he had studied neuroscience in hopes of one day becoming a doctor—as his mother suffered from multiple sclerosis. In the end, however, his life went in a completely different direction. Upon graduating, he began to work various sales jobs. Intrigued by the idea of starting his own company, he eventually started to create and sell padded underwear for men on the side. Before long, it had become a full-fledged business.

Based in Mexico, the company launched their website in 2015. Despite the fact that their products were only available online, it quickly proved to be a worthwhile endeavour. With the help of social media and Facebook ads, the business soon took off. By 2017, they had done more than $1 million in sales—all through their site.

As the company grew, however, Diersing found himself wanting to expand the team (he had previously taken care of everything himself)—there was one problem however, he needed funding. Fortunately for him, he landed the opportunity to pitch his product on ABC’s hit show, Shark Tank in 2018. One of the many entrepreneurs to be featured in the ninth season, his episode later aired on January 21, 2018, in the U.S. 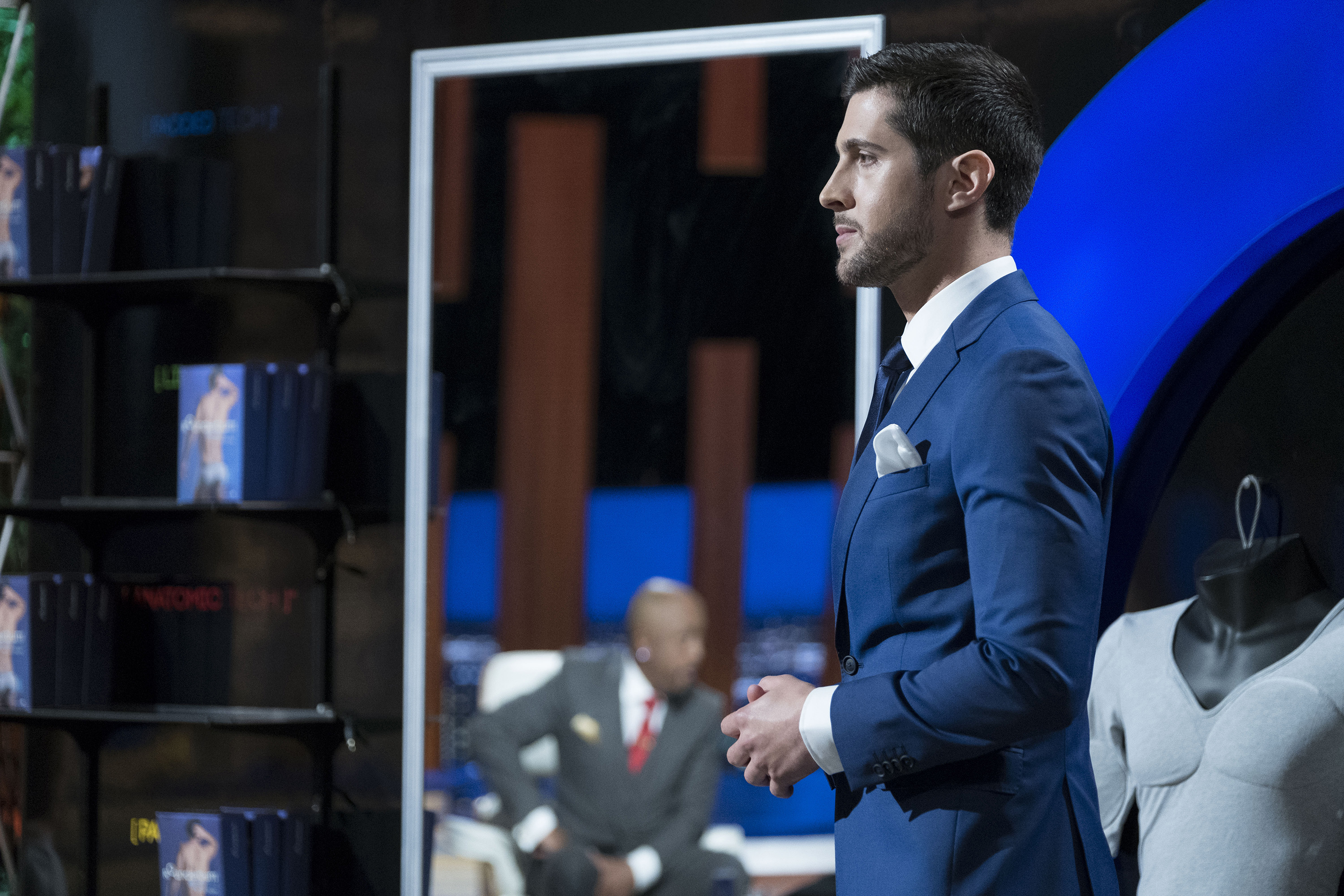 Greeting the sharks, Jonathan introduces himself as the founder of Rounderbum. Seconds later, he lets them know that he is seeking $150,000 in exchange for 10% of his company.

From there, he launches into his pitch by highlighting the importance of self-confidence. Noting that everyone wants to “look good and feel good”, he poses a question—“How often do you find yourself putting on a pair of jeans that doesn’t fit right?” As he says that, his model buddy (who had accompanied him into the tank) can be seen struggling to put on a pair of jeans next to him, much to the amusement of the sharks.

Continuing, he notes that while women have their ways of enhancing their body, “men have been stuck with what they’ve got.” With that, he introduces them to his product—Rounderbum. Elaborating, he states that it is a body shaping technology, one that is “redefining the underwear market.” Explaining further as the camera pans towards his model friends (again), he lets them know that they offer different underwear technologies, all of which help the wearer to “feel amazing before walking out the front door.”

In addition to traditional compression shapewear, he explains, they also go one step further to enhance the shape of your body from head to toe—in areas that you desire the most. Directing the sharks’ attention to the model beside him, he states that he is currently wearing their padded trunks and padded muscle shirt. Made for comfort and discretion, he subsequently points out that they’re both invisible and feel natural to the touch. 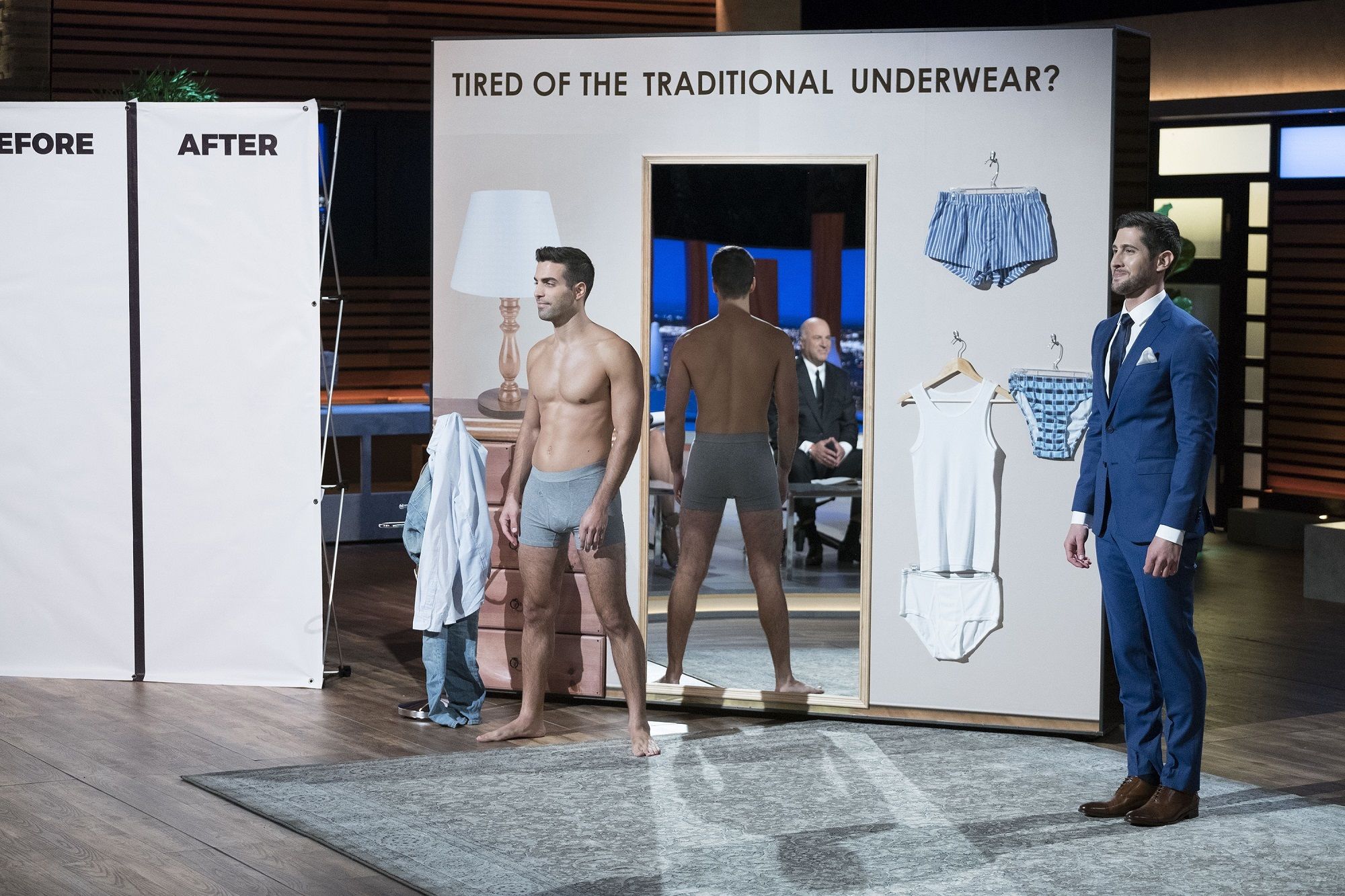 From there, he directs their attention to the “before and after” before passing out some samples. Explaining, he lets them know that the pads in the padded trunks can easily be pulled out. As the sharks examine the different items, the founder highlights the fact that they are all seamless, which helps to make it “invisible to the eye.”

Asked “why a men would want a bigger butt,” Jonathan states that it’s not uncommon for individuals to want to look better—which Lori agrees to. Mentioning Spanx for Men, Robert subsequently inquires about the difference between the two products. Giving him his attention, the founder goes on to explain that Spanx is more for compression. Just as he finishes, Kevin asks about its price, to which he’s told that they’re sold for $25.

While the number seems to surprise Robert, Jonathan ensures him that their price point is competitive. Cutting to the chase, Mark eventually goes on to ask about its sales. In response, the founder states that they sold $1 million in sales since the launch of their website in 2015, which amazes all of the sharks. Asked what he’s done in the past twelve months, he replies that they’ve done $700,000. Prompted further, he reveals that all of their sales have been online—both through their official store and Amazon.

Impressed, Robert asks about their customers, to which he’s told that most come in through their Facebook ads. Curious about the company’s numbers, Daymond subsequently asks about their profit. Addressing the question, the founder lets them know that 25% to 30% are profits. Acknowledging that fact, Mark asks whether or not they did $200,000 last year, to which Jonathan replies yes. 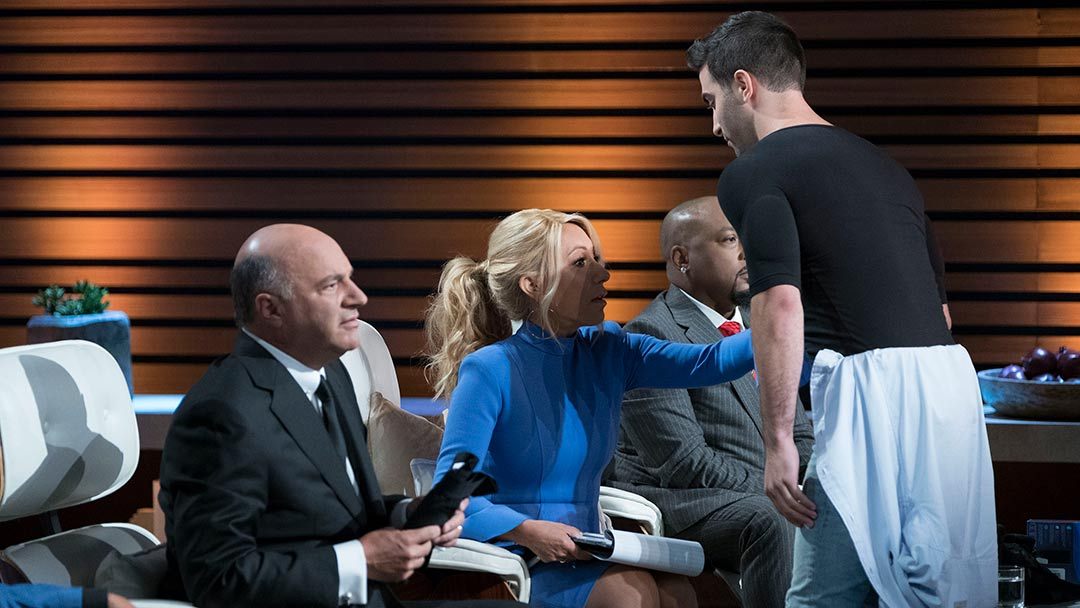 Asked what he needs the money for, he states that the company has mostly been run by himself so far. Continuing, he explains that he’d like to hire a marketing team, that can help him come up with some viral videos, as well as invest more in Facebook, which has been a success so far. As the sharks look on, he adds that they’ve recently opened up a brick and mortar store in West Hollywood.

Explaining his reasoning, he states that the prices for their fulfilment centres have been through the roof. Wanting to cut back on some of their costs, he eventually decided to “make half of it a the fulfilment center and half at a place where people can go.” Despite his explanation, however, the sharks find it hard to believe that a store is more affordable than a warehouse.

Asked about his company’s upcoming sales, Jonathan states that they anticipate on hitting $1 million this year and $1.5 million the next. Noting that he’s “already doing sales”, Daymond questions the need for him to “go that fast.” In response to that, the founder reveals that he had not gone to school for business, but instead for neuroscience—a fact that seems to surprise the sharks.

Continuing with his story, he reveals that he had initially planned on studying medicine (thus neuroscience), as his mother suffers from multiple sclerosis. Lacking the drive, however, he eventually decided to go into sales instead upon graduating. As one thing led to another, he explains, he had started the undergarment company, RounderBum.

Just as he’s about to carry on, Daymond makes a comment about his accomplishments so far, to which Jonathan reiterates the fact that he is not a professional marketer. While impressed, however, the shark admits that he has a difficult time understanding the product—which is in a way, similar to his company Titan, which makes compression and weighted clothes. Seconds later, he drops out. 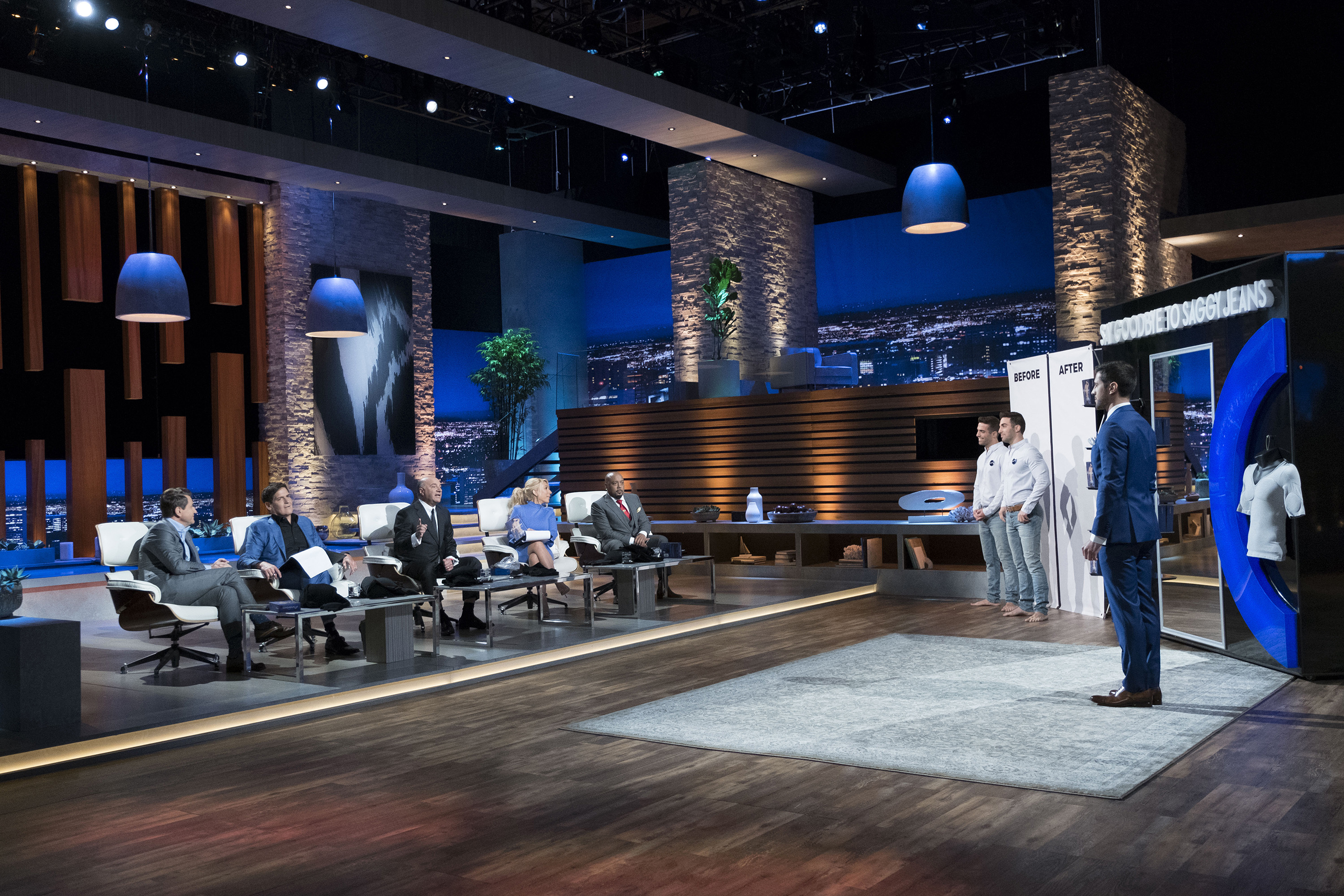 Thanking him for his time, Jonathan’s attention subsequently goes to Kevin, who quickly agrees to make him an offer. As the founder looks on, he lets him know that he is willing to give him $150,000 in exchange for a 5% stake, as well as a royalty of $2 per unit until $300,000 is paid. Curious about what he’s able to offer, he asks whether or not he’ll be able to help him get into “the major retailers in the country”, to which he says yes.

Not long afterwards, however, Mark backs out as he has issues “believing in the product.” Not wanting to waste any time, he bluntly tells him that he is out. From there, Lori begins to compliment him on his achievements. On the note that his business is already doing very well, she lets him know that she will also be dropping out.

Seconds later, their attention goes to Robert, the only remaining shark. Willing to make him an offer, he proposes $150,000 for 20% stake. Trying his luck, Jonathan asks whether or not he’d be able to settle for 15% equity instead. Shaking his head, the shark makes it obvious that he is unwilling the budge as he’d “have to do a lot of work.”

With that, Jonathan reveals that he and his team are not interested in a royalty deal, which causes Kevin to defend his offer. Pressed for an answer, he lets Robert know that he is willing to do it for 20% equity for double the amount, that is, $300,000. To his disappointment, however, the shark stands his ground at $150,000. Asked what he’s going to do, Jonathan eventually agrees to Kevin’s offer, as he is willing to take less stake. From there, the two come together for a brief handshake and hug, before his segment in the episode comes to an end.

Over half a year has passed since Jonathan walked away with a deal from Kevin. How is RounderBum doing nowadays?

As with most businesses that appear on Shark Tank, the company saw a significant increase in sales after the episode aired in the U.S. For one thing, their Amazon sales had shot up nearly one thousand percent. In fact, they’ve since become the fourth best-selling pair of trunks on the platform. Considering that, it’s probably safe to say that they’re doing extremely well—if anything, their sales will continue to increase over the next several months. Interested in making an order? You can visit their site here.

As far as their web presence goes, they’ve gained a tremendous following over the past little while. Not only does Rounderbum have more than 217,000 followers on Facebook, but they also have over 16,000 fans combined on Twitter and Instagram.

What do Customers Think of RounderBum?

On Amazon, their padded trunks currently have a four-star rating out of over a dozen reviews. Reading through some of the comments, it would appear that most customers are satisfied with its comfort and “butt-enhancing properties.” With that said, some have voiced concerns about the product’s quality. Nonetheless, the general consensus remains to be positive. In terms of their other selection, their padded boxer briefs, compression shirts and enhancing briefs, also have positive ratings on the site.

Will Jonathan be returning to Shark Tank for an update on the company anytime soon? Unfortunately, for us fans, it’ll probably be a while before he goes back on the show—after all, he had just appeared a few months ago. On the contrary, he’s probably kept busy with all that’s going on.