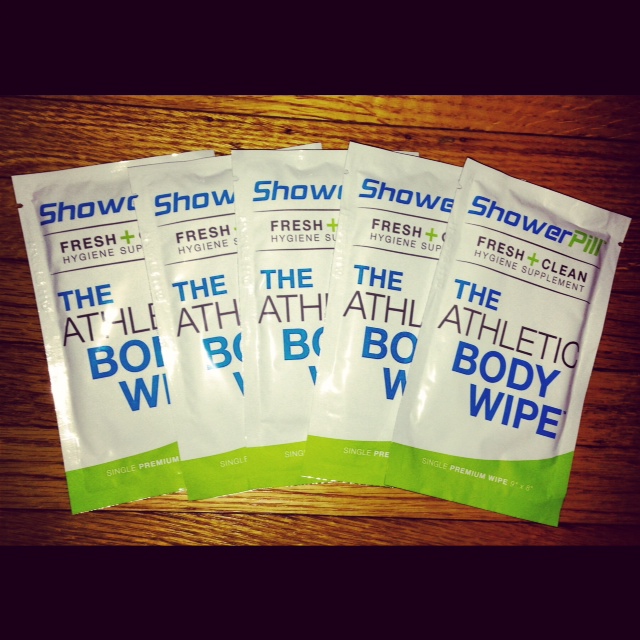 Entering the Shark Tank are three former athletes turned entrepreneur, and with them, they bring a product that they believe can help keep you fresh at all times. Meet Wendell Hunter, former linebacker, Wale Forrester, former defensive back, and Justin Forsett, former running back. The three are from Berkley, California, and their product is the ShowerPill. They have come to the Shark Tank to find an investment of $300,000 in exchange for 10% equity stake in their company.

The three athletes will let the Sharks in on a little locker room secret, so long as they can keep it between them. More athletes than you can imagine don’t shower in between games or after practice. Athletes take pride in their health and fitness, but are guilty of a stinky and unhygienic offense. Instead of telling them how ShowerPill works, they’re going to demonstrate with the help from former UFC Women’s Champion, Miesha “Cupcake” Tate.

Miesha simply has to pull out one extra thick, individually-wrapped wipe. Each wipe does not include paraffins, alcohol, or any other harmful chemicals and substances. Simply wipe down from head to toe – that’s it! Miesha is ShowerPill fresh and ready to get dressed. She can go on her way with confidence, knowing she won’t have any post-workout bad odor or spread any nasty sweat-related germs.

Miesha steps behind a prop locker and changes, then finally steps out in a dress. The three former athletes ask, which Shark wants to help it make rain with ShowerPill? Shower to the people!

Miesha passes out samples to each of the Sharks. Wendell explains that they created a product that will cleanse and nourish your skin at the same time. Lori asks if they have done any skin testing, and Wendell confirms this. They have done hypoallergenic testing, PH level testing (because he himself suffers from eczema). Unfortunately, Miesha has to take off from the Shark Tank immediately because she has a flight to catch, so she takes her leave. 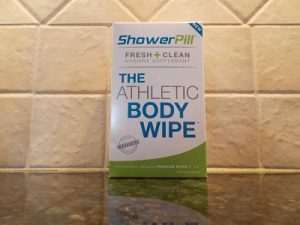 Mark asks if the three went on to play after Berkley. All three of them did – Wale went on to play nine years in the NFL and was a pro-bowl runningback. Most notably, he was part of the Baltimore Ravens and Seattle Seahawks. Wendell played two years for the Buffalo Bills, and Justin was the benchwarmer but eventually went on to join a local fire department where he has been for the past ten years.

Lori asks what one ShowerPill costs, which is only $.99. It only costs $.14 to make. Each box of 10 is sold for $9.99. Lori asks if they have any sales, which they confirm – since 2014, they’ve had nearly 100% yearly growth. The current sales number, last year, they did $300,000, and this year they are on pace to hit $600,000 and next year they project $2 million and finally $5 million two years. Barb asks how they came to find that they had such high growth. Wendell says that this was a decision that the three made to be great. Their vision was to become an iconic brand, like the Gatorade of hygiene. They primarily had to sell on e-commerce, and they know they want to expand into retail.

Robert asks if they have any progress in the retail front, and Wendell confirms that they have received a letter of intent from Pharmica, a boutique pharmacy. They are also in talks with airlines to be offered on major airlines, and even the military. Guest Shark and former MLB star Alex Rodriguez says that he has one question – he’s unclear on the number of 100% sales acceleration year after year. He asks for clarification from Wendell. In 2016, they did almost $300,000 in sales. This year, 2017, they are optimistic to do another $300,000. The Sharks all get caught up in the phrasing.

Mark asks what their year-to-date sales are, which Wendell says is just over $200,000. Mark asks how they can get to $600,000 by the end of december. Wendell says that they have focused on their customer acquisition costs, which is 25% of their run-rate. As of August, they had over a 30% increase. Alex thinks that the $600,000 will happen, but asks for the net earnings on that income. This is how he intends to evaluate the company’s worth. 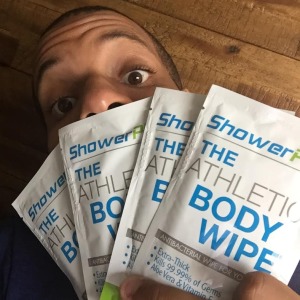 Wendell explains that they have 60% gross margins as of today. Mark then asks if they are profitable. ShowerPill is profitable, but all the money is going back into the company. They aren’t burning money and don’t have to put more money into the business to keep it alive. They wanted to be great, so they looked at what was working and they doubled down on it. Robert is still confused – if they sell $100,000 in a month, their gross margin would be $60,000. So, what is the net margin at the end of that? Wendell estimates that they would be left with $40,000.

However, Mark says it’s the other way around and they would be left with $60,000. Robert then clarifies – after all the other expenses, at an example of $600,000 in a year, how much money would they be left with? At the $600,000 revenue figure, after their costs…. And then, the train begins to derail. They don’t know exactly how much they would be left with. The gross margin is 60%, which means $360,000. They take the rest of the money and put it into marketing and growth.

Robert says that this is wrong, because they take the money and put it into payroll, rent, marketing, and other places. Justin explains that this fuels their growth. Mark says that he wants to simplify things – business is a sport, and in order to be able to be successful in football, if you bust coverage, you’re going to get cut. In business, if you don’t understand your numbers and understand exactly what your next play is, you’re going to get cut. So, Mark is the first Shark out of the deal.

Robert speaks next – he loves that they’re from the NFL and they’re incredibly talented. However, he learned a very long time ago that he has no talent (which Mark reminds him of daily), so when he went out into the world, he had to execute better. Execution trumps talent all day long, according to Robert. He has to believe in their ability to execute, which he did not hear on this episode of Shark Tank, so he’s also out of the deal.

Barb says that she loves the trio’s enthusiasm, which is genuine. Nobody could sit here without wanting to do business with them. The thickness of the ShowerPill is great, and it’s a lot thicker than a baby wipe. She feels like it would be tough to cut it with scissors, even. However, she did not like the confusion and their lack of knowledge about the numbers. They had opportunities to speak about the numbers but the more it went on, the more she got confused, and this is not something an investor wants to see. So, Barb is out as well. 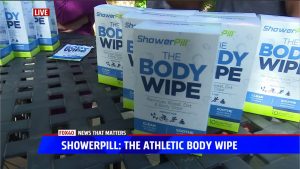 Alex speaks from experience – you’re only as good as your team. So, what he wants to see is for them to bring in an experienced guy, like a CFO or a controller. Essentially, someone who has the numbers locked down. This way, when someone like the Sharks have questions, they can turn to their CFO for questions about the numbers.

Lori is the final remaining Shark in the deal. She starts by saying “think like a millionaire, hustle like you’re broke.” She feels like the trio has been hustling and thinks the product is smart – people will buy it. She’s almost talking herself into the deal, and she thinks that ShowerPill is a really great idea and a great product. But the reason why she intends to go out is because that she knows and understands what it takes to get a product like ShowerPill into the eye of the public. While she wishes the three former athletes luck, ultimately, she’s out of the deal.

While ShowerPill isn’t available at every Target store, it’s available to most of them – at least a couple per state, based on the store locator page on ShowerPill’s website. Of course, they also offer free shipping for any order on their website for over $20. ShowerPill now also features a line of activewear, which is to say 100% polyester shirts available for both men and women. Unsurprisingly, none of the items found in the activewear section have any reviews. ShowerPill is currently looking for wholesalers, as well.

ShowerPill has an incredible social media presence on Instagram and Twitter, with close to 100,000 followers on each. This is likely from their image as good-natured athletes who retired while their brains were still mostly intact. ShowerPill is showing no signs of losing teams, and I bet at least one of the Sharks are kicking themselves for not buying in at a much higher equity stake.