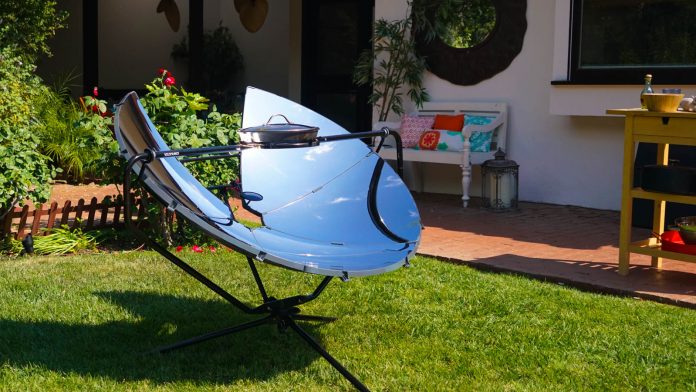 Coming to the Shark Tank is an entrepreneur with a business that grew out of a necessity to help people. Meet Doctor Catelyn Powers, and her product is SolSource. She has come to seek an investment of $500,000 in exchange for 3% of her company. We all love fun in the sun – those long summer days, outdoors, grilling up delicious food. But how many times have you gone to grill and realized that you’re completely out of fuel, or that you need to scrape the soot off first? Fuel is time consuming, expensive, heavy, and leaves cancer-causing particles on your food.

But what if she told you that you can cook delicious food 100% fuel free? SolSource is a grill powered 100% by the sun. The classic SolSource model is fast, powerful, and durable. It heats up to 500 fahrenheit in seconds and can cook a meal in just 10 minutes. The SolSource Sports model is a lightweight, compact design that packs down into a 2 foot carrying case so you can cook anything anywhere under the sun.

With SolSource, you can save time, money, and energy, all while cooking delicious food 100% fuel free and pollution free. So, which one of the Sharks wants to power the next barbecue with solar energy? 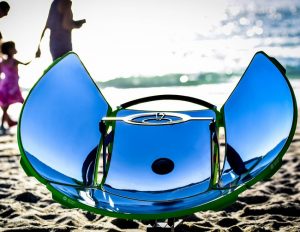 Robert starts by asking the important questions – how much sun does he need and how long does it take for the SolSource to get up to heat? As long as you can see your shadow, you can cook with SolSource. It heats up 5 times faster than a charcoal grille. Mark says that for “those that are grille-ly challenged and need a sense of time” it would be wise to include a temperature gauge. Currently, that is not part of the system but users can upgrade to a third party addon.

Lori mentions a good point – when you have a gas grill, you know to turn it up or down. There is a way to moderate control by covering pieces of the panel. You can also moderate the temperature up by using the additional panels on the side. Guest Shark Rohan Oza asks for Catelyn to break down the numbers for him, mainly sales. Each SolSource sells for $249 or $499 for the sports model, and they have 80% margins and sell direct.

Rohan asks how she came up with the idea, since clearly the doctor had something to do with it. Catelyn has degrees in chemistry and environmental health. She received her doctorate from Harvard University, and ten years ago, she went up into the Himalayas to perform a project. She ended up developing the company instead. A local family invited her into their home and it turned out that the air they were breathing in their own home was 10 times more polluted than the air in Beijing. This is simply from cooking their afternoon meal.

Every year, more people are dying from smoke exposure inside their homes just from cooking than aids and malaria both combined. 4.3 million people die each year. Once she learned this, she couldn’t go back to her research as normal. She began to work with the nomadic families to find a solution. She has done $1.3 million in sales of SolSource to date.

Last year, they did $100,000 in sales. This is a small number that catches the attention of the Sharks. Catelyn wants to tell them about the trajectory of the company over time. They started in the Himalayas and built a barter-based business because most of the customers had no cash income, so they bartered the solar stoves for agricultural goods. They deliver by horse, yak, and motorcycle in order to reach the customers. Robert says that this is the only product they’ve ever had on Shark Tank to deliver by yak.

They grew a profitable business in the Himalayas, then ran into a big problem in the form of an ethnic conflict. They had the military lock them down and their profit margin dropped down to negative $4 per unit. The team was being threatened so Catelyn made the challenging, soul-wrenching decision to completely change the business model. It was the hardest time she’s had to face in her life. Lori asks why, and it was because of seeing what the customers were going through and knowing there was nothing they could do about it.

Catelyn has nearly died twice, both from parasite illnesses, so she was not doing well in that time. She moved the business to America, which is a transition that they are still in. They have been selling units on Amazon, as well as their own website. They estimate that sales will be $500,000 by the end of the year. Producing the product helped to get it moving – she product only released last month.

The response has been amazing, and the SolSource features new reflective material that is 92% energy-efficient. They have utility patents on the designs of the product, on the new materials that are being developed, but the new product is a solar battery system. It stores energy much like plants do, over a number of days. This is a natural bio-mimicry system, which will allow them to cook at night and also cook indoors. 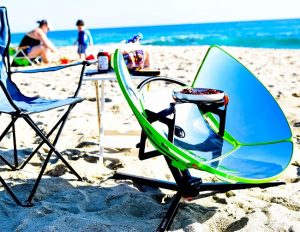 Mark asks that of all the things she could do with her technology, why a grill when she could be changing the world more quickly to harness the sun and create more energy? Catelyn says that working in the consumer market to reiterate technology helps to introduce it and move from there. Mark explains that she is fighting a technology battle for efficiency and then also the battle of consumer marketing, which is even more expensive.

Lori says that Catelyn is brilliant and takes a lot of risks. However, the problem is that barbecuers are into the taste and smell. Unfortunately, she’s the first Shark out of the deal since it’s too harsh of a market. Robert says that one of his favorite sayings is that in a small business, somebody made a courageous decision. Catelyn is all about courage, but she has an incredible technology yet only wants to pitch a grill. It doesn’t make him trust the presentation, so Robert is out of the deal.

Catelyn starts to explain that she has a whole bunch of different aspects to the business, but Barb interrupts her. Proving Robert’s point, it’s very odd that Catelyn has an answer to everything and it’s all even. She feels like she’s with a really smart robot, but there is some mistrust. Rohan says that he is fine with her intelligence. However, Barb says that she finds the evaluation unbelievable. Unfortunately, Barb is not a believer so she is out.

Catelyn appreciates Barbara’s perspective. Rohan says that he feels as though the tail is wagging the dog. Catelyn came in with a “diamond in the rough” and showed them a grill. Had she come in with a more presentable form of technology, not a grill, then the presentation would have been much more appreciated. The solar power battery is interesting, too, and plus, Catelyn’s story doesn’t lie within the grill.

Ideally, the battery could have transitioned cities and economies, but the problem now is that Rohan has too many questions on part B since they spent so much time on part A. Unfortunately, Rohan is the fourth Shark out of the deal, leaving just Mark Cuban. Mark starts by asking if Catelyn can adapt the reflectors to work on cars. Yes, Catelyn says. She explains that SolSource is currently working on microdizing the material, which are effectively solar skins. They’ll be flexible material. 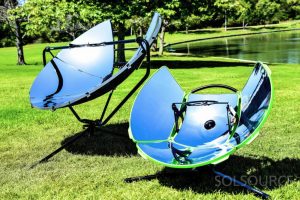 In the end, Catelyn has secured herself a partner and executive with Mark Cuban. Barbara explains to Mark that she’s a scientist, not a businesswoman. Mark says that 99.999% of the people walking into the Shark Tank are not billion dollar opportunities. The worst case is that Mark is going to have the best-tasting steaks in all of America without spending a dime on grill fuel.

Thanks to Mark’s investment, SolSource is bringing the power of solar energy right to your front door. It seems like the technology hasn’t been adapted for other uses yet, as the only two items that are still available are the SolSource classic grill and the sport edition. The SolSources are advertised as an easy to use, clean and safe alternative that are 100% recyclable and do not produce any pollution.

SolSource’s website, now listed as One Earth Designs, include a range of times that are acceptable to use the SolSource – chiefly, a half hour after sunrise until a half hour before sunset. For example, San Francisco can grill out from 7 AM until 6:30 PM in the summer, but only from 9 AM until 2:30 PM in the winter. Stockholm can grill out between the hours of 5:30 AM and 6 PM in the summer, but not at all in the winter.

It’ll be interesting to see where the technology from SolSource adapts to next, although it’s very disappointing to see that the two solar oven models are still fairly pricey and the technology has actually not been adapted to any use yet. Still, this episode of Shark Tank is only a year old, so there’s a lot of time for SolSource to do a lot of good.