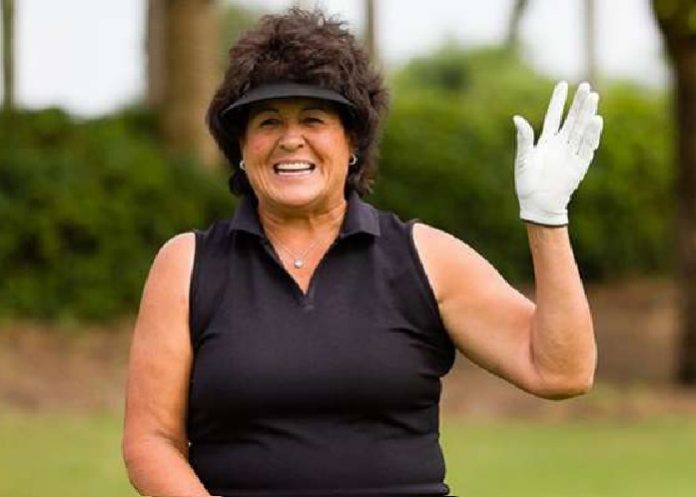 Nancy’s dominating presence in Women’s golf, particularly in LPGA Tour events, saw her win over fifty professional titles, and collect in excess of $5 million in championship winnings throughout her long career, but how much is she worth now in 2018? And exactly why didn’t she win the US Women’s open, despite one record-breaking performance in 1997, and reaching the runners-up place four times? Read on to find out.

How Did Nancy Lopez make her money & wealth?

Nancy Marie Lopez was born in Torrance, California on January 6th 1957. Her father Domingo was a keen amateur golfer himself, and he taught Nancy to play from a young age. The Lopez family moved to Roswell, New Mexico when Nancy was aged two, and at the age of 13 Nancy won her first tournament, the New Mexico Women’s Amateur. She held on to the title for the following two years, 1970 and 1971, and in 1972 she won the US Girls’ Junior, and the Women’s Western Junior. After graduating from Goddard High School in Roswell, Nancy won the US Girls’ Junior and Women’s Western Junior championships again in 1974, and in 1975 she tied for second place at the US Women’s open. In 1976, Nancy won the AIAW National Championship, the Women’s Western Amateur, and the Women’s Trans National Amateur, all at the age of just 17.

1976 also saw Nancy named the All-American, and Female Athlete of the Year, thanks to her exceptional play at the University of Tulsa, and that year she was enrolled in the US Curtis Cup and World Amateur teams. In 1976 Nancy came second in the US Women’s Open for a second time, still as an amateur, and the following year she left college in he sophomore year and turned professional in time for the start of the 1978 season.

Nancy Lopez’ professional career got off to a legendary start, and a historic one. In 1978 she won nine tournaments, at one stage winning five events in a row. Her meteoric rise to fame saw her grace the cover of Sports Illustrated in July 1978, and she was not only the LPGA Rookie of the Year, predictably, but also the LPGA Player of the Year. Nancy also took the Vare Trophy that year, awarded to the player with the lowest scoring average, and she became the only golfer to win all three awards in the same season, a distinction that she still holds today.

Her incredible rookie year ended with the Associated Press naming Nancy their Female Athlete of the Year, and her professional career continued at the same pace in 1979, when she won eight tournaments and again picked up the LPGA Player of the Year award, and the Vare Trophy. She won several tournaments every successive year until 1984, although she had only played part-seasons in 1983 and 1984 during the birth of her first child.

With her reputation as one of the all-time greats of the sport already established, Nancy amassed a record of 52 tour wins throughout her career, 48 of them on the LPGA Tour, and in 1987 she was inducted into the World Golf Hall of Fame. In 1988 she was the LPGA Player of the Year for a fourth time after three wins, an impressive achievement considering she was recovering from surgery at the time. Nancy Lopez was considered to be the greatest player in women’s golf during the first decade of her professional career. From her legendary rookie year until the late 1980’s Nancy completely dominated Ladies golf, but it wasn’t until 1989 that she performed well enough in the US Women’s Open for a chance at the title as a professional, but once again she was overshadowed on the final round and finished in second place for the third time.

In the early 1990’s Nancy gave birth to her third daughter, and she began to cut back on her professional appearances. By 2002, after recovering from knee surgery, she was appearing in only 10 or fewer events per year. With career winnings of over $5 million, Nancy retired from regular tournaments in 2003, although in 2005 she captained the US team in the Solheim Cup, the LPGA equivalent of the Ryder Cup.

Nancy married Tim Melton, the Houston-based sportscaster in 1979, but the couple divorced in 1982. In October the same year, she married for a second time, to Major League baseball Player Ray Knight, who at the time was playing for the Houston Astros. Nancy and Ray settled in Pelham, Georgia, and had three daughters together, Tori, Erinn, and Ashley. They divorced, after 27 years of marriage, in 2009, although Nancy has continued to host the Nancy Lopez Golf Classic in Georgia even after her divorce, as she has done every year since its inauguration in 1986.

Now in 2018, Nancy Lopez is estimated to be worth at least $10 million, although some estimates put her personal fortune at double that amount. Her career saw her compete in 460 professional tournaments and win $5,320,000 in total, which despite her domination of the sport for over a decade, puts her at only 58th in the all-time winnings list, mainly due to the rapid increases in prize-funds for professional golfers in the last two decades. Nancy founded a company, Nancy Lopez Golf, in 1998, and the company, which sells golf clubs, accessories and clubs designed specifically for lady golfers, now operates in The United States and Canada.

Nancy has appeared in several golfing documentaries, most recently in ‘Chicken Soup: Conversations for the Golfers Soul’ in 2007, but during the height of her career, she was a guest on The Tonight Show with Johnny Carson and several other chat shows. In recent years she has occasionally worked on TV, commentating on tournaments, and she has worked with a number of charitable organizations since her retirement.

Apart from hosting the Nancy Lopez Golf Classic every year since 1986, which raises funds for the Albany Community Hospice, Nancy also hosts a tournament every year at The Villages in Florida, where she has lived since her divorce from Ray Knight. The tournament raises funds for AIM (Adventures in Movement), a charity that helps mentally and physically handicapped children and adults. Nancy has also worked extensively as a national ambassador for the charity and is often joined by fellow AIM Ambassador, baseball legend and Hall of Famer Joe Morgan. She has promoted the charity both at home and abroad, most recently in 2011 when she visited blind golfers in China. After a phenomenally successful career, only one title eluded her, The US Women’s Open. After she finished second in the competition twice as an amateur, Nancy got the runners-up place again in 1989, and in 1997 she became the first player to score under 70 in all four rounds, yet despite that impressive achievement, she lost to Alison Nicholas by a one-stroke margin.