240sweet Update for 2022 – What Happened After The Profit

240sweet Before The Profit 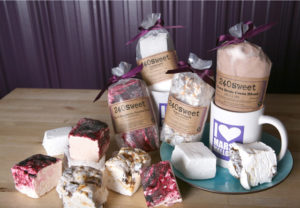 Alexa Lemley and Samantha Aulick met a long time ago while they were both working for Lemley’s Catering. Max, Alexa’s father and owner of the business, asked Sam on her second day of work to keep an eye on his daughter. She had a high spirited personality that could sometimes get her into trouble. Little did they know, this would be the start of a life long friendship and eventual marriage. The two of them have been working side by side for years now and after Max entrusted the catering business to them, that is how they started their business 240sweet.

As a way to promote the Lemley’s Catering company, Alexa and Sam began making homemade marshmallow treats. They became so popular that it inspired the two to make a whole business out of it. However, running a business that revolves solely around marshmallow production is no easy task, so of course they ended up needing to reach out for help. Now it’s time for Marcus Lemonis to step in, evaluate their business, and see how he can help these two chefs turn a profit from their sugary sweet new company.

240sweet On The Profit

Macus heads out to Columbus, Indiana after the 240sweet girls reach out to him. When he reaches the headquarters, he is unpleasantly surprised. Their “retail” area is lumped together with their shipping office and it’s all very overwhelming from the start. 240sweet is already a brand that has been featured in popular magazines, so Marcus is pretty shocked that such a popular name is operating under less than stellar conditions.

What is even more off putting though, is the fact that 240sweet’s marshmallows have an odd smell and taste. Not even the building itself smells sweet like it’s supposed to. Sam 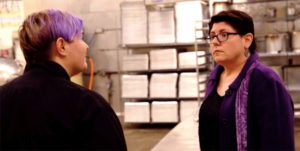 and Alexa blame this on Max. Apparently they are sharing their cooking space with Alexa’s father so he can also run his spice company while the girls are also working on their sweets. This is definitely not an ideal match and is definitely compromising the quality of their product. When the girls take Marcus to the back, it’s pretty obvious to him why the marshmallows he sampled ended up having a strange aftertaste. Max’s spices take up more than half of the kitchen space and while the marshmallows are being made, they absorb the bits of garlic and onion in the air.

Marcus then meets Max and learns a little bit about his own company. They make mustard, barbecue sauce, and hot sauce. In general, his business is more successful than his daughter’s. Despite this though, he does not pay any of the rent and only reimburses them when he feels it’s necessary. Marcus can see why the girls are frustrated because this isn’t fair to them and their business is suffering as a result of this unfair arrangement. Alexa and Sam are desperate for Marcus to show them the way out of this mess. Tensions are running high between this family and they need some outside guidance. Marcus, however, isn’t really interested in being a family mediator.

Taking a look at the way they actually produce their marshmallows, Marcus sees just how inefficiently they are operating. It takes them about twenty minutes to cut a tray of marshmallows, but there is a machine they could buy that would only take 1 minute to get the job done. If they had the money to purchase it, they would be able to make a lot more product in less the time.

There is definitely potential here in this business and Marcus can see that. Alexa is a great chef who can produce an amazing product. The real issue here is in the way her father is 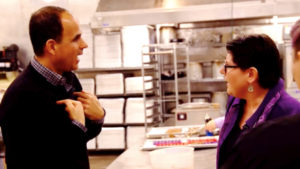 taking advantage of her and their space. It was even discovered that Max took out a line of credit to start his own business, and now 240sweet is using their revenue to pay that off. The only way this is going to work out is if Alexa can confront her father about the wrongs he is doing. For this reason, Marcus is hesitant to make an offer because he doesn’t necessarily want to be a part of all the familial drama.

After some brief discussion, Sam and Alexa agree to talk to Max on their own. Only then does Marcus lay down an offer of $100k for 51% of the business. He wants to improve their working space and equipment to make 240sweet more efficient. The girls are fine with this, except they propose that they give some percentage of the company to Dede, their accountant. Marcus agrees to give her 5% and they end up making a deal.

A lot of negative drama started to appear after the episode aired. Even Markus himself stated that he felt like he was being used. In the end, he lost the $100,000 that he invested into the business. While he could have sued the owners, he felt that it wasn’t worth the trouble. This prompted fans to leave negative comments on the company’s Facebook page.

In response, the owners wrote a post, saying that ‘while [they] appreciate the opportunity to be featured on television […] the portrayals of those featured can be misleading.”

Unfortunately, fans of the show did not take the post well. It resulted in negative backlash, which prompted the owners to deactivate the Facebook page altogether. Their website was kept up and running, however. They continued to sell their sweets and even offered treat-making classes to those who were interested. That was back in early 2016.

By September 2018, they had stopped producing their products altogether. Their website also went down.

The couple later re-emerged in 2020 with a new business venture called KetoLuxe. Allegedly, they had decided to change their focus after Sam was diagnosed with Type 2 diabetes. Unlike 240Sweet, which offered marshmallow treats, the new company offered sweetened condensed milk treats for those who followed a ketogenic diet. Not only were they sugar-free, but they were also gluten-free and low in carbs.

However, reviews from customers weren’t that great. Many people stated that the treats had a weird texture and that the taste was mediocre at best. Some people even discovered mold in their treat containers.

Eventually, Alexa and Sam changed the name of their company from KetoLuxe to Low Carb Revolution. Wanting to switch their focus to frozen meals and treats, they launched a Kickstarter campaign, which successfully raised more than $15,000 with the help of 181 backers. This allowed them to invest in new equipment such as freezers, food packaging systems, and cooking items. Chef Alexa also began offering coaching programs that ranged from a few hundred dollars to a thousand dollars.

That’s not all, the pair also launched a food catering business called Artisan Foodworks. Like KetoLuxe, however, most of the reviews that they received were negative. Not only were people dissatisfied with the quality of the food, but their customer service was also lacking. One user on Yelp who had hired them for their wedding wrote that the staff had arrived late and that their overall service was very disappointing. Other people also shared similar experiences.

Given that, it’s not surprising to know that their catering business is longer active as of 2022. The same goes for Low Carb Revolution. The website has since been shut down and their Facebook page has also been deleted.