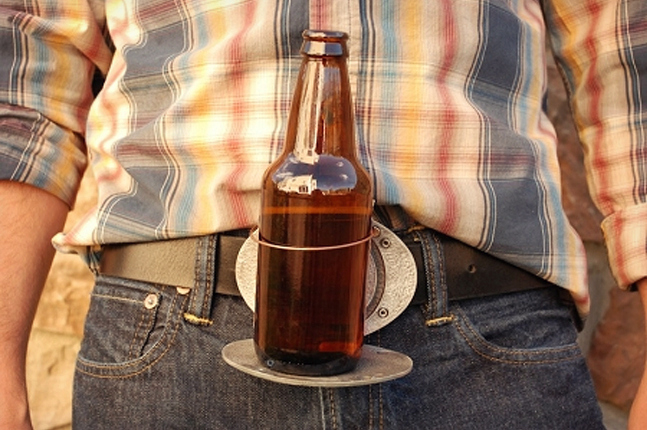 Jay Kriner’s career was a lot more serious than his Shark Tank pitch would lead you to believe. He performed the life or death task of disposing of unexploded bombs. He came up with the idea for the BevBuckle in 2002. He continued to work on the concept for years, unable to afford the patent process or large scale manufacturing. He got serious in 2005. He named his project and purchased the web domains he would need to turn BevBuckle into a viable business. But would it survive the Shark Tank? 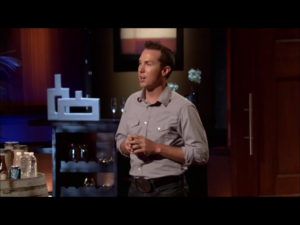 Jay introduced himself and told the Sharks that he was seeking $50,000 in exchange for 10% of his business. He started with lofty claims, saying that the BevBuckle is one of the most interesting inventions that “America had ever seen.” Jay then listed a bunch of different venues where the BevBuckle might come in handy, such as a sporting event or a concert. He picked up a beer bottle that was already conveniently on the stage. Jay unlatched his belt buckle, and placed the bottle on the little tray off of the buckle, proclaiming his new catch phrase “BaBam!” This had the Sharks laughing in their seats.

Kevin told Jay that it was a “great idea,” which is unusual positive for him. Jay asked if Christmas came early and then confirmed that it did. He claimed that everyone knows someone that would want one. Jay said that he could have the face plate of the buckle modified to meet the potential customers needs, whether it was changing the color or the logo. He specified that it would be suitable for licensing or branding. He is solving the very real problem of not having free hands while at an event. “It’s the BevBuckle! BaBam!” The Sharks all echoed the new catchphrase.

Mark asked him how he came up with the idea. Jay said that whenever he was out at bars, he had a habit of resting his beverage against his belt buckle. Barbara asked to see one of the belt buckles. Jay passed some around. She noticed that it did not come with the full belt, and said that it was pretty heavy. Kevin opened his and asked if it was a magnet that was holding it closed. Jay confirmed that it was. Kevin then asked his predictable question – whether or not Jay had any sales. Jay said that he has personally sold 4,000 units at festivals and other events across the country. Barbara asked him how long that had taken him, and he told her four years. That seemed to deflate the Sharks a bit. They do not seem impressed with his $340,000 in sales either. But then Jay tells them that he has a patent, and it’s game on again.

Mark asked Jay what his cost to make the product was. Jay explained that it’s $10 per unit, and he sells them for $35 usually, but up to $110 depending on what is on the face of it. Daymond confirmed that that is a pretty good price. Mark asked Jay what his full-time job is, and Jay went into the specifics of his dangerous day job unexploding bombs.

Robert was curious to know what Jay would do with the $50,000 if he received it. Jay said he had a couple of different options, and brought out two envelopes. He said that the Sharks get to choose. Robert picked envelope one, and Jay explained that it was a list of every major retailer that had expressed interest in the BevBuckle. Jay handed the second envelope to Mark Cuban. He said that it was a list of every major raceway that wanted the product sold trackside. It included big names like NASCAR and Daytona. Daymond looked very unimpressed throughout this whole thing, and he asked Jay if any of those companies had written him a check.

Jay said that none of those companies had written him a check because he ran into an issue with his overseas manufacturer. He told the Sharks that more than a fourth of his most recent order was defective. Kevin voiced his disbelief. Daymond asked to see the list of retailers as Barbara demanded to know why Jay had not accepted a purchase order from any of the companies on it. Jay insisted that he did not have the startup capital available to make that work. He said that he could make it work if only he got the money in advance.

Barbara then asked him if he was going to work full time on the project. Jay said that he would if he was able to pay the bills with it. He still has a growing family to feed. Barbara asked him how much he would need to make it a full-time job, and he told her he would need at least $2,000 a month. Daymond had been inspecting the list, but stopped, and then tore it in half right in front of Jay. He said that the list is worth nothing if no one was willing to write him a check. He went out, saying that he would not have the time to teach him business.

Mark asked Jay how much he currently had in inventory. He was confused because Jay had challenges for so long, and nothing had been resolved. Jay told him he had 62 units in stock. Mark looked disappointed and said that he was not working smart. Mark went out. Robert stated that Mark was right, but that he empathized. He stated that he was in the same position, and he ended up learning from others. He made an offer of $50,000 in exchange for 75% of the company, saying that it would take a lot of effort to get Jay where he needs to be.

Kevin looked surprised and accused Robert of stealing Jay’s company away from him. He made a counteroffer. He did not ask for equity in BevBuckle, opting instead for 12% royalty on every unit sold. Robert asked him how much he wanted the business to succeed, and Jay told him “really bad.” You could see in his eyes that it was true.

Barbara then jumped in at $50,000 for a 51% equity stake, to knock Robert out from the running. Kevin told him he was crazy if he took the 75% off, and Robert countered that he did not want to lose 12% of his cash flow. Daymond told him to close on one of the deals as Jay looked on in confusion. Jay took a minute to decide but ended up going with Barbara. They shook hands, and Kevin told him that he made a big mistake by giving up control of his company. Jay seemed undeterred, exiting the stage with a final “Babam!”

Bevbuckle Now In 2022 – The After Shark Tank Update

As far as we can tell, the deal with Barbara never went past the due diligence stage. She did, however, offer to work with them in the future. She also offered to pay for a future order, if they needed it.

But in the end, they didn’t need her help. Thanks to the show, they sold more than $40,000 worth of product within a week. They also began negotiating with Urban Outfitters, Spencer Gifts, and other retailers. They also expected a second order from Jay’s favorite iced tea brand Twisted Teas, who licensed the BevBuckle. And while they experienced some quality control issues, they were eventually able to get it manufactured in the U.S.

Since then, they’ve been featured in the German issue of Playboy and at NASCAR’s Daytona 500 event. They also upgraded their packaging so that each buckle comes in a tin container—each with its own hand-signed thank you card.

In 2019, the popular country music blog Wide Open Country also featured BevBuckle, praising the product for its quality and its drink-holding capabilities. While it may very well be paid content, it doesn’t change the fact that the company is actively marketing for the product.

As of 2022, BevBuckle is still in business with an annual revenue of approximately $1 million. Currently, there are twelve designs to choose from on their website: ‘Merica, USA, The Original, Mustache, Cheers to Beers, 50 Pointer, Gone Fishin, Longhorn, Star, Rub for Luck, Cross, and Texas, all of which go for $34.95 except for Mustache, which is listed for $37.95. Shipping is also reasonable across the United States (approximately $4 for USPS First Class Shipping and $8.50 for USPS Priority Mail).

That’s not all, you can also get them from Amazon, where they have been well received by customers. At the time of this writing, the BevBuckle has a 4.5-star rating out of over 1,000 reviews. Not only is it praised for its practicability, but many people have also commented on its stylishness and have stated that it’s a great crowd pleaser. With that said, there have been some negatives.

For example, one user stated that the product came in a plain, unmarked box without any instructions or identifying materials. Others wrote that the buckle tends to tip forward if you have a belly, which renders it less practical. Still, the majority of customers are satisfied with their purchase.

For those who’d like to get their own BevBuckle, you can check out their website here. They also have a Facebook page that’s updated fairly often.