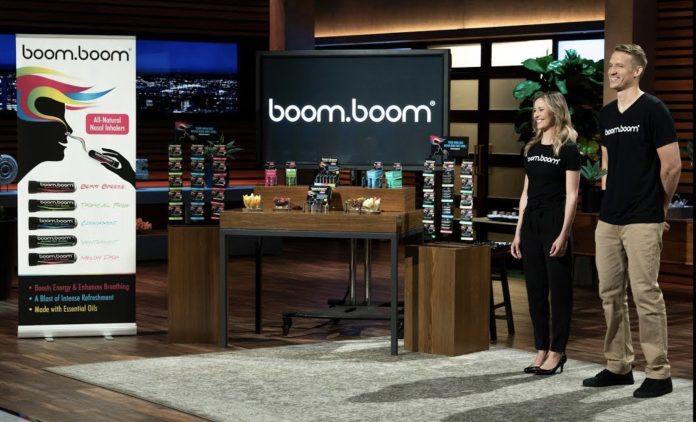 BoomBoom Naturals is an aromatherapy inhaler created by Chelsea and John Pinto in 2015. Five years prior to that, they traveled around Thailand, where their initial encounter with essential oil nasal inhalers sparked a business idea. They eventually became intrigued by the possibilities of such devices, and when they returned home, they spent the next few years developing an inhaler they could eventually bring to a worldwide market. In no time, they were able to turn a profit. Would this inspire the Sharks enough for BoomBoom to get an offer? Let’s take a look. 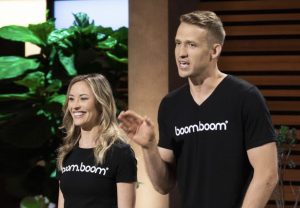 John and Chelsea Pinto walked into the Shark Tank and onto the stage holding hands. John introduced himself and then called Chelsea his better half. They presented their company as BoomBoom and requested $300,000 in exchange for a 10% equity stake in their company.

John called the nasal inhaler the Shark’s new best friend for their noses and said that it was time to turn breathing into money. Chelsea pointed out that the other sensory organs all have products dedicated to them: the eyes have eyedrops, lips have lip balm, the mouth has mouthwash, and the skin has lotion. John said there wasn’t yet a popular product on the market for your nose to enjoy.

They introduced their product, BoomBoom, a nasal inhaler used for smelling yummy fragrance oils. The ingredients were peppermint, menthol, and other essential oils. It is explicitly meant for stimulating your senses. Chelsea continued, stating that most products intended for your nose are medicinal. They are used for decongestion or allergy relief. BoomBoom was designed to provide intense rejuvenation and sensory input. The smell is powerful, and customers could use this in a sensory bag to relieve anxiety attacks or disassociation.

Chelsea and John then demonstrated how to use the product. She taught the Sharks to unscrew the cap, place the barrel of the scent stick into each nostril and inhale deeply. They did it individually and then, to Lori’s delight, let each other smell their scent sticks with tangled arms. 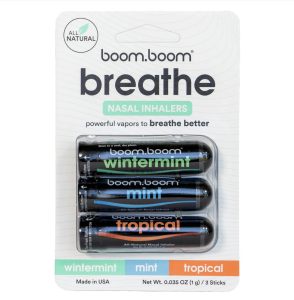 John described the product as gum for your nose but much more minty fresh. There was menthol and mint in all of them. John described the sensation of inhaling the nasal stick as tingly and cooling. He claimed it made you feel alive. John ended the presentation by asking who wanted to invest and get the business booming, which was an obvious play on their company name.

Lori immediately requested to smell test the nasal aromatherapy inhaler stick. Chelsea and John began to hand out the sets, each with different scents. Robert joked that he should smell his and then pass it down. Becoming serious, he asked which was the most potent smell. John said that they all had similar intensity. John noted that the best seller was the tropic l rush. The Sharks all tried their samples and let “Woo!”s  of excitement.

Charles Barkley mentioned that it opens up your nasal passages. Kevin said it was pretty good. Chelsea mentioned that she had multiple uses for the product. She likes to keep one in her car to go to before or after work to refresh her senses. Robert wanted to know if other products were similar to BoomBoom. Chelsea answered that they were two other nasal inhalers on the market, but they were more medicinal and not as fun and creative as theirs was.

Charles Barkley wanted to know what their sales looked like. John answered that they did $750,000 in sales last year. They were on track to do 1.1 million for this year. Lori wants to know where and how they were selling. John said that most of their sales came from their website as well as on Amazon. 45% was wholesale to retailers. Charles asked how much it cost to make one of the little inhaler tubes. John told them it was $.70 to make a single inhaler. They charge $7.99 on their website. 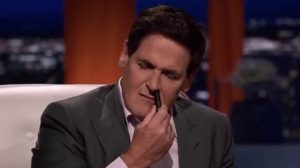 BoomBoom was able to make a profit of $120,000 last year after paying themselves. John continued, stating that the product was made in Southern California. While going offshore could have reduced the cost, they wanted to ensure it was made with the best standards and ingredients since people were inhaling it. Of course, Kevin asked the question about reducing the manufacturing costs. John did say that if they start scaling their manufacturing numbers up, they could cut their cost of goods by 25%.

It almost sounded too good to be true to the Sharks. Unfortunately, there was a downside. BoomBoom sold its product in stores for $3.99, half of what they were selling it for on their website. Mark Cuban asked what their wholesale price was. John let him know that it was  $1.50. That seems to surprise the Sharks. Kevin let them know that that was not a good margin, and John did not deny it. Lori wanted to know why they went that route. Although they would end up undercutting themselves, John still felt like that was the sweet spot for retail. He said it moved a lot quicker when it was $3.99 in retail instead of the higher price of $5.99.

Charles Barkley asked if this company was the pairs’ only job. John said it was his only job, while Chelsea worked part-time as a dentist. Kevin again brought up the issue of them undercutting themselves by selling it for $3.99 in retail stores while it was eight dollars on their website. He insisted that they wouldn’t be able to do it long-term as no one would want to purchase it for eight dollars on the website if they could get it for $3.99 in stores. John insisted that there is no focus on retail. In retail, it was a point of purchase products that people would impulse buy at the cash register.

Charles wanted to know if the married couple were 50-50 partners in BoomBoom. John explained that he owned 36% of the company, and the other co-founder owned the same amount, while three other people who invested $200,000 owned about 25% of it. Charles Barkley wants to know why they were given 25% for less money when the Sharks were only offered 10%. John told him that there is no value in the company. The Sharks reminded them that there was value on their side too. 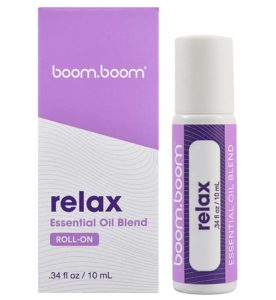 Kevin said that he was impressed because when they first walked out onto the Shark Tank and he didn’t think that they were going to tell him then that they had a $1.1 million year. He, however, was not willing to give them a $3 million valuation. He went out. Lori said that she had thought that the product may work out. She could picture using it in a public restroom or on an airplane, but she also believed that the valuation was too high. She also believed that the product would be a one-time impulse purchase. She went out.

Charles Barkley went out as well, stating that while he liked the product, it wasn’t something he saw himself using consistently. He also told Chelsea not to quit her job as a dentist. Mark Cuban said that it wasn’t that their valuation was too high; it was that their margins were too low for having 45% of their business in retail. The numbers didn’t make sense. He also went out, stating that he wished it went more viral than it had. Mark passed on making an offer.

Robert took another sniff from his aromatherapy inhaler. His concern was that he wasn’t sure if BoomBoom would take off or not. He said that all of the Sharks had liked the product, but no one was happy about the valuation. He continued, stating that most of the Sharks must be tired because they can change it to reflect the reality of the business.

The other Sharks made noises of surprise. Robert offered them $300,000 in exchange for 36%. John and Chelsea attempted to haggle him down. John tried 15% and then 20%, but Robert said he couldn’t do it. The two walked off the Shark Tank without a deal. In the after-show interview, John said it was a bummer not getting a deal with Robert, but he still believes that BoomBoom will do well even without investment from the Sharks.

BoomBoom Now in 2023 – The After Shark Tank Update 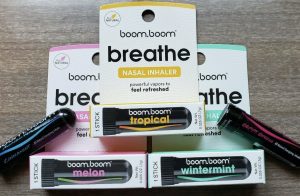 Although they walked away from Shark Tank without a deal, BoomBoom still appears to be going strong as of the writing of this article. Their original website is still up, and, according to LinkedIn, they have 11 employees in their Los Angeles, CA location. John is still listed as the CEO and founder of the business. It seems like they are looking for brand ambassadors – their website states that they are searching for partners to “share the gift of wellness with the world.”

The aromatherapy inhaler stick is sold on Amazon and their website, as well as in Albertsons, CVS, and Walmart. The BoomBoom blog is fairly active, and quite a few of the posts are about music festivals, which is a unique marketing strategy. Social media is clearly a big part of their advertising, and they have impressive numbers – 20.1K followers on TikTok, 46K on Facebook, and close to 100K followers on Instagram.

John and Chelsea have another facet of the BoomBoom business – BoomBoom CBD. In addition to a single scent of CBD-infused nasal inhaler, the site offers multiple flavors of CBD gummies, as well as a tincture and a roll-on stick. The products have amazing reviews with an average of 4.89 stars for almost 500 reviews.