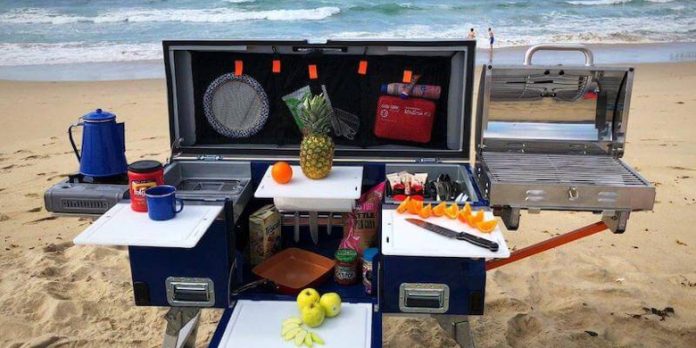 Tailgate-N-Go was founded by a father, Ron Johnson, along with his daughter, Taylor, and his son, Kobe. This family came up with the idea while they were on a camping trip. While unpacking their camping supplies, they realized they had forgotten some essentials; things like cooking oil, seasonings, and utensils. Not to mention, the table they brought for cooking and preparing food on was full after unpacking their other supplies. Having nothing to cook on or cook with, the Johnsons realized that there had to be an easier way to go about this.
The family discovered that the best contraption would be a box that was equipped with all the essential storage spaces needed for their kitchen items. Even better, the box would be able to fold out into a mini kitchen. After much brainstorming, they came up with what they had formerly referred to as a chuck box. This is essentially a metal box that can hold all the necessary kitchen supplies you may need while you’re out camping. However, needing a catchy name for their invention, the Johnsons decided to call this box a Tailgate-N-Go. 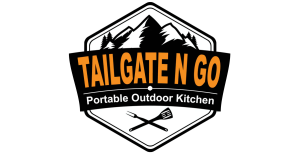 The Tailgate-N-Go portable kitchen is made out of heavy duty aircraft aluminum, making it durable enough for any camping lifestyle. It is also lightweight to make moving around much easier. Tailgate-N-Go comes equipped with a bottle opener, towel hooks, garbage bag hooks, a knife magnet bar, utensil storage, cutting boards, and even a place to hold your paper towels. Not to mention the box has a variety of additional storage and a safety lock to keep animals and children out of it when needed.
In addition to all that handy storage space, Ron Johnson designed the Tailgate-N-Go to have a built-in grill, griddle, single-stove burner, and a small sink. The Johnsons really thought of everything that any camper would need and made sure to incorporate it into their kitchen. As the name suggests, this portable kitchen can be placed on the tailgate of a truck, as well as on the ground, a table, or a stand.
After creating various prototypes and getting patents in place, the Johnsons started introducing the Tailgate-N-Go to trade shows. During these trade shows, the Johnsons would keep an eye out for the reactions that each customer had about the product. Overall, the reactions were all positive and the Johnsons ended up selling quite a few.
Taking the Tailgate-N-Go to trade shows lasted for about a year and a half before the product began intriguing the sharks on Shark Tank. During that time, in just 18 months, the family was able to sell more than 100 portable kitchens. However, the family wanted to take their chances in formally introducing the product to the sharks, in hopes of leaving the stage with a contract. Could the Johnsons succeed in receiving an investment? Let’s find out.

Ron Johnson and his kids appeared on Shark Tank on October 27, 2019, in search of $250,000 for a 10% investment in Tailgate-N-Go. This specific episode was quite special due to Ron’s son, Kobe, being the first deaf entrepreneur to appear on the show. The family started out by introducing their product, Tailgate-N-Go, following with an explanation as to why they created the product in the first place. They then showcased how to fold out and set up the portable kitchen – this part seemed to really impress the sharks once they saw how much the product could store. 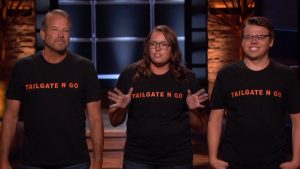 The first shark to begin questioning was Daymond; he asked how much the Tailgate-N-Go sells for. Kobe took the lead, explaining that there are three available models of the product: the Overlander sells at $1,400, the River Box sells for $1,000, and the full-size box sells for $1,500. After hearing these prices, the sharks seemed to become unsure of the product due to the prices being so high.
Following Daymonds question, Mark then asks how much it cost the Johnsons to assemble the Tailgate-N-Go. Ron responded, saying in varieties from $500-$748, depending on the model being assembled. He also added that the products are produced in Colorado. Next, Lori questions how much the product would cost to ship to the customer, given that weight needs to be taken into consideration. Once again, depending on the model being ordered, the prices vary. Ron explained that the weights range from 55 pounds to 75 pounds, making the shipping cost anywhere from $120-$150.
After being asked, by Daymond, about the patents, Ron discussed how he had two patents set up using the rail system. Following that discussion, Mark questioned how much money the family had put into their product. He also wanted to know if they had received any aid in investing in their business. Ron explained that they had never received aid and continues to mention that they have invested $250,000 into Tailgate-N-Go. 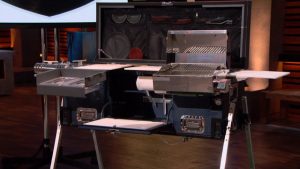 The family was then asked, by Kevin, why their business had a valuation of $2.5 million. Ron responded honestly, saying that he believed that their product was unique and that the patents in place helped their businesses worth rise; however, Kevin was not too fond of this response. Taylor then chimed in and explained that any further investments would be used on more production costs and keeping their inventory stocked up.
The questions continued on with Matt asking if the prices of each model could ever be decreased; however, before receiving a response, Mark chimed in and said he was out because he isn’t into camping. With that being said, Mark still believed the family had accomplished great things. The next shark to bail out was Lori. She wasn’t too informed on the art of tailgating or what it was all about. Taylor replied to Mark and Lori by presenting that their overall sales had tripled within just six months.
Kevin speaks up to confirm that Tailgate-N-Go is a great idea; nonetheless, he doesn’t believe that it’s worth the $2.5 million net worth. At the same time, he still wanted to lay out an offer for them – he offered $250,000 for a 10% investment, along with 10% interest and a royalty of $100 for each product sold. While this offer didn’t interest the Johnsons (or the other sharks), Kevin continued to claim that he could make Tailgate-N-Go a big hit on social media.
As the vice-chairman of the team, Miami Dolphins, Matt stepped up to say that he thinks that tailgaters are more likely to make their personal set-ups rather than spending money on a Tailgate-N-Go. He was out. Following up next, Daymond pronounced that he was out as well. Although the idea was good, he believed that the family, being new to the business, would blow too much money on new improvements on the kitchens. This thought worried him. 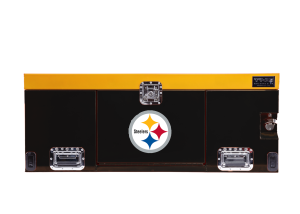 Having left his offer on the table, Kevin restates that they could still accept it; however, they weren’t too interested in it. With this being the only offer present, Taylor was losing hope. The Johnsons had put in so much time and effort, it would be a shame to give that all up. Nevertheless, as the family was about to leave empty handed, Daymond spoke up to remind them of a possible counter-offer. They liked the sound of that.
Now here’s where the Johnsons twisted it up a bit. Rather than referring back to Kevin’s offer, which was still available, they chose to pitch Matt a counter offer. Ron and his kids believed that Matt would be the best shark to help them and their business thrive. Sticking with the initial $250,000, they offered Matt a 20% investment in Tailgate-N-Go. While this offer may have seemed fair, Matt still wanted to have the chance to regain his capital. That’s when Taylor stepped in to ask him if he would be interested in a royalty.
Before Taylor received an answer from Matt, Kevin popped back in to claim that he would be willing to decrease his royalty to only $50 per portable kitchen sold. But after hearing of Kevin’s altered offer, Matt chose to stick with the Johnsons for the $250,000 for a 20% investment and a $50 royalty. At this time, the Johnsons are more pleased with the offer, and they accept it.

Tailgate-N-Go Now in 2023 – The After Shark Tank Update

Following the Johnsons appearance on Shark Tank, their investment deal with Matt has been followed through with. Although they’ve concluded their deal with the shark, their business is still up and running successfully. In fact, the business is thriving each day and has expanded their inventory. 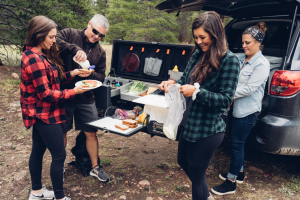 In July of 2021, Tailgate-N-Go announced their partnership with the NFL. This partnership has expanded the company into producing customized chuck boxes that represent the NFL teams logo, as well as the teams colors. In addition, too, that, Tailgate-N-Go boxes can be ordered with a variety of the NCAA teams logos and colors as well. These boxes can be found and purchased on Amazon or their company website, tailgatengo.com.
The company did face some slower times during the peak of the pandemic; however, they worked through that successfully with the help of their shark Matt and the NFL and NCAA teams. In fact, within the first couple months are appearing on Shark Tank, Tailgate-N-Go had earned $400,000 from sales and had increased their pre-show sales to about 60%. It’s safe to say, as of 2023, the Johnsons and their Tailgate-N-Go business has been a thriving success that customers love.
Share
Facebook
Twitter
Pinterest
WhatsApp
Previous articleBoomBoom 2023 Update – What Happened After Shark Tank
Next articleSoupergirl Update in 2023– What Happened After Shark Tank