Cave Shake, now rebranded as Space Shake, was started by Holly Heath and Billie Cavallaro in 2015 as a solution to their keto diet plan. According to their appearance on the Food Founders Podcast, the pair met in college and recognized the mutual entrepreneurial spirit in each other. Holly was in the culinary field, and Billie was studying sports nutrition. They stayed best friends after graduation. Both started the keto diet to address inflammation issues they had been having and loved it. They did not see many keto milkshakes options to purchase around that time and decided to create their own. In 2017, they managed to sell $270,000 worth of their product. Would the Sharks bite on this delicious low-carb drink? Let’s take a look. 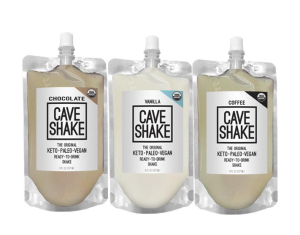 Billie and Holly walked out onto the stage and into the Shark Tank. They introduced themselves and the business and stated they were seeking $250,000 in exchange for 10% of their Cave Shake business in equity. Holly started the presentation by asking the Sharks if they had ever tried cutting sugar and carbohydrates out of their diet. Mark Cuban nodded along like he knew the struggle.

Billie continued in a gruff voice, saying that you could be hunting in the grocery store and realize carbs and gluten were in everything. Holly continues, and a photo of her eating a large stack of pancakes appears on the screen. She claimed that the carbs from the pancakes would make her so sleepy that she would just take a nap. They continued, stating that giving in to sweet cravings would cause a giant meltdown and a binge on ice cream.

It’s OK, though. They had the perfect solution. It was, of course, their product. Billie picked up a mason jar from their display and demonstrated the Cave Shake.  They excitedly went back and forth, telling the Sharks different aspects of their product. Cave Shake could be consumed pre or post-workout since they were so low carb and filled with energizing MCTs. The coconut milk beverage could work as a snack, meal replacement, or dessert. 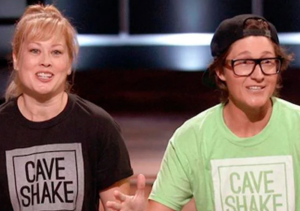 After finishing the presentation, the pair broke out in song and dance. They’d created their catchy theme song with the themes they included in the production. Holly said they knew the Sharks love to eat, so they brought samples. Sharks were delighted by the Cave Shake song, and they were singing it to themselves as Holly and Billie passed out tiny cups of Cave Shake.

All of the Sharks tasted the samples, which were sweetened with stevia. Robert did not like it. He said it tasted funny. Mark and Lori, who were frequently on diets, enjoyed the taste. Robert asked about the calories. Billie let him know that there were 480 calories in each. It was on the small side, but there were many healthy plants based fats in it. A few of the Sharks expressed surprise at the number of calories in each, but the pair of entrepreneurs advised that calories are not of concern on a keto diet, where the focus is on avoiding carbs and eating healthy fats.

Mark laughed and asked Charles how concerned he was with calories, and Charles said he was always very concerned. Charles held up his little jar of keto milkshake and asked how much it would be. The entrepreneurs said they charged the consumer $7.99, and it cost an average of $1.50 to make each flavor. They were selling them locally in Southern California in health food stores.

Robert asked about the sales next, and Holly advised that they made $270,000 the year before appearing on Shark Tank. As of the taping of the show, they were at $182,000 so far for the year. Mark Cuban told them they were doing good.

Robert asked them about their background. He could tell that Billie was into sports. Billie let him know that he has done many different sports growing up, including ski racing. He sustained various injuries and suffered from pain and inflammation. He started a keto diet to fight the inflammation in his body and brain, and after a while no longer experienced back pain at the same intensity as before trying the low-carb diet. Holly said that Billie was the one to try it first and then get her into it. She was in a bad car accident when she was 17, and still had lingering pain from it. 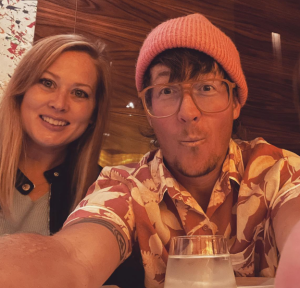 Kevin wanted to know why they thought they deserved $250,000 for just 10% equity. Billie said that they partnered with Coke in an incubator deal. This means that they gave a portion of the equity to the beverage giant to grow by providing free or low-cost resources that they might not otherwise have access to. It’s something that only start-ups in the very early stages of development would use.

Charles wanted to know what they gave up in order to have the incubator on their team. Holly let him know that they gave 15% for LA Libations to be their strategic partner. Mark Cuban told them it was a lot of equity to give up for an incubator. Billie insisted that they were a good partner for Cave Shake. Mark wanted to know what they would want a Shark for if they had a partnership with the incubator.

Billie said she believed that it was best to have as many good people on their side as possible. Holly explained that they did not come from the business industry and they took a huge chance to be there. Holly quit a full-time job and moved across the country. Kevin asked if there was a royalty or commission on their deal because every incubator deal he has seen has one. Holly explained that the incubator gets a commission on anything above $10,000 that they bring in. Since they have no money, that was deferred. Kevin was trying to get the information on what percentage that was, but they seemed confused. Billie insisted that they just started so she wasn’t sure.

Holly said that she’s not understanding the question. She said that the incubator hadn’t brought in any accounts yet. Cave Shake just started with them. Holly did not answer Kevin’s question about the percentage of sales that they would end up owing to Coke.

Kevin told them that if it were him, he would let the incubator go. He went out, stating that they would face too many challenges for him to get involved. He said that he couldn’t stand another guy getting royalty that could be going to him. Robert found the branding confusing and did not know what keto was. He was also not a fan of the taste. He went out.

Mark asked Charles if he would drink Cave Shake. Both of them were always on diets. Charles said that he liked two of the flavors and did not like the other two. He did not see the nutritional value of it. Billie tried to explain that it contained a lot of MCTs, which was a great source of energy for sports. Mark said he liked them, their energy, and the shakes. But he also went out, saying it was too early for him to invest, and it would be too much work.

Lori said that she followed a paleo diet and keto when she needed to lose weight. But she didn’t like to drink her calories and she needed to really believe in the products that she invested in. She went out. 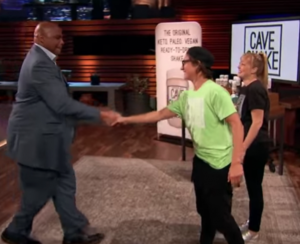 This left only basketball superstar Charles Barkley. He said he would give them the $250,000 for 20%. This gave the two entrepreneurs praise. Billie asked him if he would be willing to go down to 14%. Kevin let them know that what Charles was offering was pretty reasonable already. Charles said he thought he was making a fair offer, considering their true work as a company and the incubator. Holly said she didn’t think that should give up that much equity. She seemed extra nervous given that she gave up her career and moved to CA to give the business a shot.

Kevin asked why Barkley would make the offer in the first place. Charles explained that he had always struggled with his weight. He liked Billie and Holly. He liked the products as well and wanted to invest in something that promoted health and wellness. He believes that he was really investing in people when he made an offer on the Tank. Eventually, Holly relented and they took the offer.

Cave Shake Now in 2022 – The After Shark Tank Update 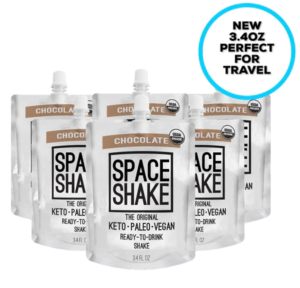 After obtaining a deal with Guest Shark Charles Barkley, Cave Shake pulled in a healthy sum of $750,000. They rebranded as Space Shake because they will blast you off into a healthy body. They managed to get into one of the country’s most popular health food stores – Whole Foods- with the help of LA Libations, the hotly debated incubator that Mr. Wonderful suggested that they get rid of.

It seems like they also took the Sharks’ opinions on the caloric impact of their shakes, shrunk the serving size, and changed the packaging to a convenient pouch. Each keto milkshake now only contains 180 calories, down almost 300 calories from the previous version.