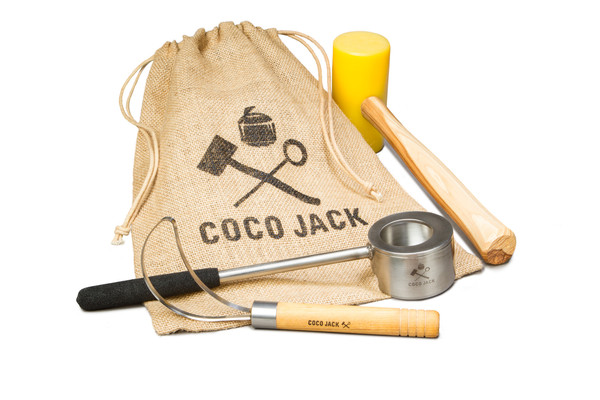 Dave Goodman, from New York City, is the founder and owner of the Coco Jack. He has come to the Shark Tank to seek an investment of $125,000 in exchange for 10% equity in his company. Next to Dave is a bin of coconuts, which Dave grabs and explains that coconuts are eaten by hundreds of millions of people worldwide, but the biggest problem is getting into them. Dave demonstrates by hacking into the coconut with a saw, and Lori asks if Dave ever misses. Dave jokes that they get emails from people all the time who have unfortunately missed the saw and cut their fingers off.

Fortunately, there is now an easier method to open coconuts. Coco Jack can open up coconuts in just a few seconds, no matter your size or strength. Dave explains, they have had a million people from little old ladies to young children do this. The Coco Jack is just a little bowl with a handle on it with a mallet, and Dave demonstrates how this works. He sets the bowl down in the top of the coconut and bashes the mallet into the coconut, eventually opening it for its delicious milk. Robert asks to try the Coco Jack next, as well as Mark. Both of them bash open coconuts while Dave explains the instructions; place the Coco Jack on top of the coconut, hit it a few times, then remove the final piece.

Since none of the Sharks have had coconut juice before, Dave distributes samples of each Coco Jack along with samples of the Coco Jack to each Shark. Lori asks about the peculiar shape of the coconuts which Dave reveals are since the coconuts are actually Thai coconuts, which are the sweetest coconuts on Earth; they can be found at almost any Asian or Mexican market, or even any Whole Foods or international market. Dave continues on – with the Coco Jack comes a stainless steel scooping tool for removing the meat from the coconut, which is actually the best part. This is part of the Coco Jack’s purchase, and it does indeed get all the meat out as Dave scoops out the inside of the coconut. 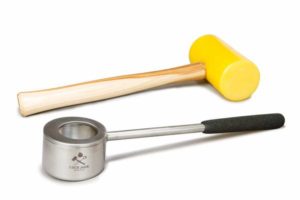 The “Coco Pack” comes with the scoop, the mallet, and the Coco Jack, all located in the burlap sap in front of the presenting table. Kevin points out that he has heard that drinking excessive coconut water causes a laxative effect, and Dave explains that he is not a doctor, although there can indeed be a cleansing effect. However, coconut water is very healthy and very hydrating and is full of electrolytes; Mark points out that the coconut juice tastes like corn. Barbara then questions Dave’s background, and as Dave points out by his unique appearance, he is not actually from New York City. He sold his apartment in New York to live full-time on the road; at age 14, he was working as a percussionist and composer and even a conductor. He went out to California to study mythology and politics at a university, and eventually was turned onto a raw vegan diet where coconuts became a big part of the regime.

Dave had no problem opening his coconuts with a clever, since he did it all the time, but he began to wonder if there was a better way to open the coconuts. However, Kevin points out that while the story was interesting, he does not see a way where he, the investor, can make his money. Lori then asks how Coco Jacks are being sold, and Dave explains that he is the only one selling the Coco Jacks so far through their website. Sales are about $325,000 in 9 months; each pack costs around $60. Each tool costs around $26 to make in the United States. Robert then asks how long it took for Dave to take the idea from practice to put into reality, and Dave says that he had the idea for the business 12 years ago; Barb is blown away that it took so long, and Lori explains that he wasn’t so passionate enough to foolishly dive into the project. Dave was passionate about the project, but was more passionate about other things since he was young and had time on his side.

Dave then explains, at best, he thought he would be making products for maybe a million people in the Venice Beach, California region; he started doing customer development and people began to tell Dave that every restaurant sold coconuts and needed products to help them speed the production of coconut-based meals. Barb then voices her thoughts, as she is curious how organized Dave is. Dave replies that he prefers creative thinking, and that he actually prefers outsources for certain things if he is not great at a specific task; he has three people who are also invested in his business. Barb then points out that every time she has invested in an entrepreneur who has not been organized, or had an entrepreneur with a right-hand man that organizes the business, those investments have never delivered and they spend that money quickly and not wisely. Barb says that she sees a lack of organization, and is the first Shark out.

Lori then says she has good and bad news for Dave. The good news is that she loves the product and there is indeed a market for it, as there is merit behind the product and he will eventually be able to sell the product to some people. The bad news is that Lori is out because she does not think that there will be a big enough market for Lori to care about the product. Robert then follows up on Lori’s point, saying that he also loves the product and loves things that are obtuse and out-there, much like Dave due to his appearance, but as an investor, he does not see the next step – how he can bring the business forward and scale it up to generate more money. Robert is out.

Kevin, in his infinite wisdom, says that he has a story for Dave. The Thai coconut is prominent in Cambodia, where Kevin grew up when he was young. His house keepers would take Kevin to the market every morning where the market attendants would have to carve the coconut into his unique shape, knock the top off, and put a wooden straw in it. Since Kevin has had experience with the coconut and feels the connection, Kevin makes an offer of $125,000 in exchange for 50% of the business. Robert jokes for Dave to get the machete in self-defense, but Kevin explains.

Coco Jack is not a business yet, it is simply a product; as an investor, Kevin would be placing his money in the development of the product that requires a huge revamp of the business due to Dave’s misorganization. So, Kevin feels this offer is extremely fair and asks if any other Sharks would step up. Mark then says that he likes the idea and says that when people solve problems, new industries are created. While Mark would want to go after bars and restaurants, he feels that Dave cannot focus on one thing at a time. Mark then questions how much debt the company has, which Dave says is about $13,000.

Mark then offers an investment of $125,000 structured as a convertible debt with a 7% interest rate; this means that Mark won’t ask for any money to be repaid back initially, but this money will stay in as debt. If business goes well, then Mark will eventually convert the debt to 25% equity over time. If Dave uses money, then he will use it as a credit line with 7% interest rate. Kevin then explains that if Coco Jack fails, the patent will count as convertible debt to the owner of the equity of the company – in this case, Mark. This could be a very risky deal, as Kevin’s offer has no debt and places him as an equal partner with Dave.

Dave then offers back 20% equity for Mark’s deal, which Mark instantly refuses – Kevin points out that Dave will have to take either equity or debt. After stroking his beard and thinking for a moment, Dave ends up accepting Mark Cuban’s unique offer of convertible debt.

The deal with Mark didn’t pan out in the end. But that didn’t discourage Dave; he eventually reached an agreement with Malibu Rum, who agreed to use their branding on their product packaging. That’s not all, they also divided up the set so that a user can purchase just the Coco Jack and mallet for $36.95 or the advertised pack (the one seen on Shark Tank) for $49.95).

However, they soon faced a problem. As time went by, more and more knock-offs appeared on the market. This ultimately drove down the price of Coco Jack, which was sold on both their website and on Amazon.

As of 2023, their website has gone dark. Their social media pages also seem to be abandoned; they haven’t been updated since 2017. Not only that but the product itself has also been pulled from Amazon so it’s no longer available for purchase online.

Having said that, the Amazon listing still exists so we can look at what customers thought of the product. In terms of review, it had a 3.5-star rating out of 17 reviews. Despite that, most of the comments were positive, with many praising the Coco Jack for being easy to use. Not only that but many also wrote that the scooping tool worked great at cleaning out the meat.

The only negative review that we saw was one where the customer never received their full order (even after contacting support)—so it’s more of a delivery/customer service issue than a product issue.

What is Dave Goodman up to nowadays? We’re not too sure. For one thing, he still has Coco Jack listed as “active” on his LinkedIn page; nothing else has been posted. Given that, he probably hasn’t updated it in a while. Having said that, he did write on his profile that he’s a “prodigious writer” and that he has “2 books nearing completion” so he may very well be working on that at the moment. Not only that but he may also be involved with an orchestra seeing as how he’s an experienced musician, composer, and orchestra conductor.

Will he be returning to Shark Tank anytime soon? Probably not. Not only has it been several years since his pitch, but the company is no longer up and running (as far as we can tell anyway) so there would be no reason for him to appear on the show. If anything, it would only be possible if he comes up with another product, which for all we know, may or may not happen.