Jeffrey Miller, the founder of CoolWraps, has just stepped into the Shark Tank. He is seeking an investment of $100,000 in exchange for 40% equity in his company. Jeffrey starts by asking the Sharks a question – when was the last time they had fun gift wrapping? If the Sharks are like Jeffery, Jeffery is gift-wrapping challenged and never has any fun wrapping gifts. So, Jeffery turned to CoolWraps, which is a shrink wrap gift bag that is so easy to use. Actually, CoolWraps are as easy to use as 1, 2, 3 – first, stuff it, then seal it, then finally, shrink it.

Jeffrey demonstrates the process – simply start by placing a gift into a bag, then remove the protective film from the adhesive strip. Fold the end over and seal it, just like an envelope. Take a hairdryer, then run it around the edge of the present, and you will instantly see the heat cause the present start to shrink. There is no tape, no scissors, no hassle, and absolutely no mess. In no time, you have a wonderfully wrapped gift, and Jeffrey has just that in his hands after the demonstration.

Robert asks if the presents on the table are all ones that have been shrink-wrapped prior to the appearance on Shark Tank, which Jeffrey confirms are all CoolWraps. He actually did them all last night, and unlike regular gift wrapping, he has fun wrapping presents. CoolWraps is a great product, and it is proven, and it is great – and Jeffrey stops his pitch. He seems lost for a moment, as a sound effect plays for the viewers, and Jeffrey then starts by saying that it truly is an amazing product. CoolWraps are perfect for everyone – young adult, male and female, and if you have dexterity issues, CoolWraps are perfect.

Robert and Daymond exchange exaggerated glances as Jeffrey’s pitch appears to be taking a sharp drop in quality. Jeffrey then mentions that CoolWraps is a game-changing product, and it is an amazing business. Mark asks about the history of CoolWraps, and Jeffrey starts by saying that the product was created about 10 years ago. Jeffrey was part of a partnership, where they got the original CoolWraps onto a QVC twice where they sold out. CoolWraps then sold out a test run in CBS pharmacy. The crew behind the original CoolWraps went to the bank for money since they ran out, but they could not receive the money. The group had purchase orders in their hands, but the banks insisted that the group of borrowers put up their home as equity against the loan.

Robert then asks how much the group was asking for from the bank, which Jeffrey says that in order to fulfill their order, they needed $300 to $500,000. Kevin then asks for Jeff to pretend that he is the bank manager, and role-plays out a scenario. Kevin then asks for Jeffrey to put his house up as collateral for for the loan, and while Jeffrey says that he was willing to place his home as collateral, the other partners were not willing to do so. Kevin then asks why the other partners did not believe in CoolWraps enough to put up their own home. He then says that this is the real test of any entrepreneur, since this is where all your skills are put into practice.

Mark points out that Jeffrey evidently did not believe in CoolWraps enough since he said no to putting his house up as collateral towards the loan. Jeffrey explains that while he said yes, the group consensus says no – he actually wanted to find other ways to bring in outside venture capital to start the company. Robert asks how much equity Jeffrey owned, which came out to 20%. Today, Jeffrey owns 100% of CoolWraps after the other partners began to drop off. The other partners gave up and Jeffrey acquired everything. Lori asks why Jeffrey has done nothing for 10 years, and he believes that he just could not get in front of the right people to pitch his product to. 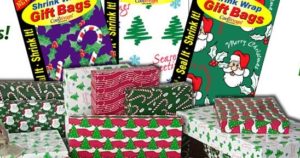 Lori asks if he went around to demonstrate the product to generate excitement and awareness of it, but Jeffrey admits that he only went around and tried to hand out his cards. He never demonstrated the product in action, so nobody ever knew what the product was that he was selling. Mark can be seen giggling in a quick camera cutaway, then Daymond asks if there are any other competitors on the market. CoolWraps is covered by a utility patent, so nobody else can make anything else that uses the same idea of shrink-wrapping a sheet around an item. Lori asks how much one CoolWrap costs to make, and Jeffrey explains that each bag costs between $.11 and $.18 per bag.

Lori, the self-entitled “queen of QVC,” then asks how the product did on its initial QVC runs. QVC, a home-shopping network, had 18-bags per purchase and they sold 1688 units in their 20 minutes on television. Daymond asks if Jeffrey has brought the product anywhere else to pitch it, and Jeffrey admits he has not. Kevin is skeptical, since he feels Jeffrey is under the misguided direction that a 10-year old product can simply be reintroduced with no issue. However, Jeffrey says that he is happy that the rejuvenation is happening now because manufacturing has gotten so much cheaper.

However, Robert says that in 10 years, Jeffrey has never made a sale – he is obviously the showrunner and not the sales guy. Robert is out of the deal first. Lori then steps in and says that she likes the product and loves that Jeffrey has a utility patent to cover the broad production of the product, so Lori extends an offer of $150,000 for an outright buyout. Jeffrey would make $100,000 and Lori takes all the risk since the product idea sat for 10 years. Jeffrey can continue to do other things and it becomes Lori’s problem, or her success.

Mark steps in and offers $250,000 for the entire company, and a 3% royalty for Jeffrey. However, Mark must immediately know if Jeffrey will accept the offer. Jeffrey takes a moment to mull on his decision before accepting Mark’s offer with an excited grin on his face.

CoolWraps Now In 2023 – The After Shark Tank Update

Unfortunately, the deal with Mark never went past the due diligence stage. Still, the company had a strong web presence. Being on the show also gave them some exposure, which helped boost their sales.

In the end, they went at it for several years. If anything, it appeared to be a successful business. Various types of gift bags were available on their site and they all seemed to be popular among customers.

Fast forward to 2022 and the website had gone dark. In fact, it had been down for several years even before then. The URL itself still worked but there were no products listed on the site; there was only a “we are currently working on a new website to bring you new shrink wrap gift bags” message. By 2022, the domain was gone entirely.

Their social media accounts have also been abandoned. Take their Twitter, for example, it hasn’t been updated since 2015. The same goes for their Facebook page; they last posted about attending the New York National Stationery Show in 2015 and it’s been radio silence since.

Given that, the company may have very well gone out of business back in 2015. While the website was up for a few more years, we’re not entirely sure if the product was actually sold during that period. They may have just left it up as the domain had not expired yet.

What is Jeff Miller up to now in 2023? According to LinkedIn, he worked as a Global Design Project Manager at Bose Corporation up until April 2019. From there, he was a 3D Environmental/Experimental Designer at Freeman Company. In the end, he was there for a little under a year; he later left the position to create his own company called Jeffrey Miller Design. He now works as a freelance entrepreneurial designer and according to his profile, he has been consulting and designing for a Fortune 50 company as well as for a new theatre venue in the Massachusetts area.

Not only that but he’s also taken advantage of many learning and teaching opportunities. For one thing, he has completed an intensive certificate course via ITIC Systems. He has also taken online classes in Twin Motion, 3DS Max, and Unreal Engine. Those who are interested in his design work can check out his website at jeffreymillers.design for examples.

Seeing as how he’s moved on to other endeavors, it’s probably fair to say that Cool Wraps won’t be coming back anytime soon, which is a shame seeing as how they were actually pretty cool.