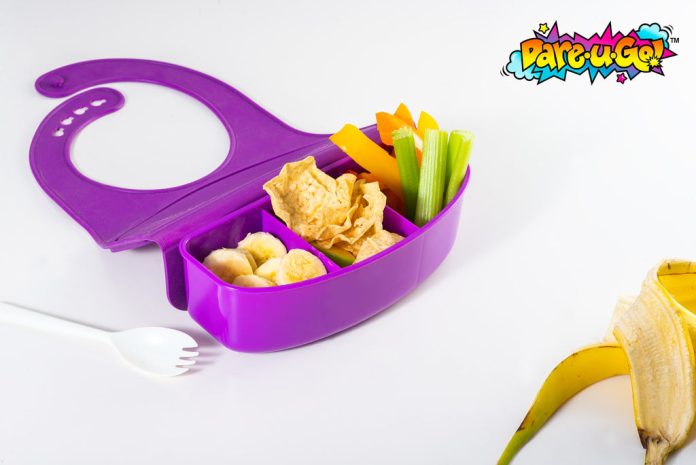 Dare-U-Go was founded in 2016 by former America’s Top Model contestant and All Stars winner, Lisa D’Amato. As a busy mother herself, to two toddlers, Lisa understands and has undergone the struggles of having children eat while on the go. Doing so tends to be messy and quite difficult on, both, children and their parents. Due to these struggles, Lisa figured that there had to be a better, easier way for children to eat away from home – this is when she came up with the Dare-U-Go bib.
Dare-U-Go is a better alternative to a classic bib. This new and improved bib still attaches around the child’s neck; however, it is made with silicon, which is crucially food-grade material. This material is essential for easy clean-ups, dishwasher and microwave use, and for the safety of the product touching your child’s food. The product contains three proportional 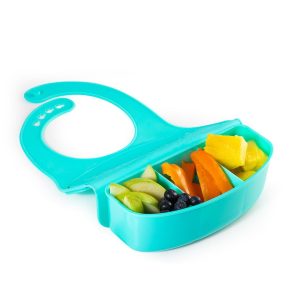 sections allowing the child’s food to not only be of the perfect serving size, but it also keeps the food from touching. There is also a holder for their utensil on the backside of the bib. In addition to those features, the Dare-U-Go bib can fold into itself to tightly seal the sections for proper food storage or for easier carrying.
Rather than using cloth or disposable bibs, which can potentially lead to more garbage in our environment and more dirty laundry, these bibs can just be wiped down or tossed into the dishwasher for cleansing.
As for Lisa’s business with Dare-U-Go, she started it off with a Kickstarter campaign in 2017, just a year after creating the product. This campaign was a big success and it raised Dare-U-Go a total of $37,511. Shortly thereafter, a few months into 2018, she began shipping out the bibs. However, while her business seemed to be doing alright, she was striving for more guidance with the growth of the business. What better place to search for business help than by presenting the product to a line of popular investors – the sharks on Shark Tank. The only question is: Will a shark want to invest?

In March of 2019, Lisa D’Amato introduced Dare-U-Go on Shark Tank in search of $350,000 for a 10% investment in her business. While presenting the bib to the sharks, Lisa begins her pitch. She makes sure to mention that the product is priced at $22.99, while only costing $2.68 to make the bibs. She continues to say that within the past three months, the beginning of 2019, she had made more than $100,000 in sales. After seeing the impression those statistics had on the sharks, Lisa announces that there are three larger companies who are interested in bidding on distribution of Dare-U-Go. Following that, she ends her pitch with a genuine conversation about her childhood battle with anorexia and how it had affected her throughout her growing years.
As negotiations begin, Lisa and Robert Herjavec have a conversation about marketing. Lisa conveys to Robert that the world-wide market for children’s bibs is at $15 billion. This statement reaches Mark in a negative way as he claims Lisa had lied about being a fan of the show. He continued to say that, given her claims of having watched Shark Tank, she should have known to not bring up the world-wide market in her pitch. Mark is out. While this first negotiation had already failed, Lisa still had hope with the remaining sharks.
The first shark to make an offer was Kevin O’Leary. He likes the product idea; however, he believes she needs infrastructure – he offers her $100,000 for a 15% investment along with a debt of $250,000 to be paid. Kevin’s offer was much lower than Lisa had anticipated, leading her to hold off on her decision while the other sharks spoke. 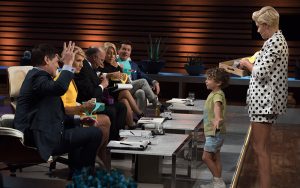 Shortly after Mark had claimed to be out, Lori Greiner and Robert Herjavec did the same. Overall, Lori loved the idea, but she felt as if Lisa had not learned the necessary details about her business or how she’d like to run it. Robert, on the other hand, loved the story Lisa had presented during her pitch; however, Dare-U-Go just isn’t the type of business he’d see himself investing in.
Down to two remaining sharks. Kevin’s offer is still on the table, but he revises his investment to a 20% stake rather than the 15%. Again, Lisa holds off on his offer to hear what Barbara has to say. Barbara Corcoran states that she believes Lisa is struggling with essentially keeping her business going. She thinks a well-disciplined partner could be beneficial to Lisa and the Dare-U-Go brand, so she offers $350,000 for a 50% investment in the company. From then on, negotiations between Kevin O’Leary and Barbara Corcoran are re-presented with small revisions.
Kevin changes his offer once more to present an investment of 25% of Lisa’s company, with the $100,000 and $250,000 debt still in place. Following his revisions, Barbara then revises her offer to a $150,000 cash investment for 35% of the business, along with a $200,000 debt to be paid. This would total the $350,000 that Lisa was initially searching for. At this time, these two offers are final and Lisa will have to choose one of them or walkaway without a contract. She contemplates her business and what’s best for it. Knowing the stability that Barbara can provide for Lisa and Dare-U-Go, she accepts Barabara’s offer of $350,000 for 35% of Dare-U-Go.

After appearing on Shark Tank, the Dare-U-Go business remains running. In fact, in 2020, just a year after airing on the show, she states that he bibs were pending to be manufactured in the USA, while it were already available in 20 other countries. Following that, in September of 2020, Lisa made an announcement on the sales of the bibs bought on the Dare-U-Go website. She announced that 50% of all Dare-U-Go bib sales would be donated to a charity for racial equality, along with a heartwarming sentiment about how the brand cares greatly about the future of our nation and everyone in it. 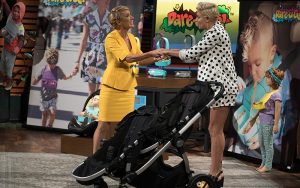 In February of 2022, Lisa and her business appear to be thriving, with a net worth of $46 million. At this time, it’s not clear whether or not the deal between Lisa and Barbara Corcoran had played out; some people actually believe that Lisa may have accepted an offer from one of the interested distributors she had mentioned.
While there is no evidence of this occurrence having happened, Dare-U-Go has expanded tremendously and is now available, both, online and in-stores. These products can be found at retail stores such as Amazon, Walmart, Babyrama, BuyBuy Baby, and many more. Dare-U-Go bibs can also be purchased on their company’s website; however, after the pandemic, some orders may take longer to ship depending on where they’re being shipped to.
Share
Facebook
Twitter
Pinterest
WhatsApp
Previous articleTop 10 Fastest Jets & Planes in The World – 2023 List
Next articleWhat Happened to Timeflies Tuesday – Latest Updates for 2023