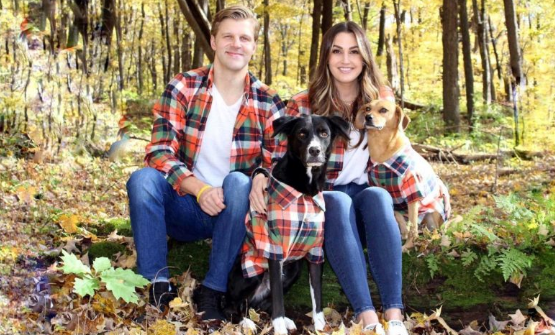 It all started in the summer of 2014. Wanting to dress up their pup for an annual barbecue, Scott and Gina went out looking for a festive doggy shirt. However, they weren’t able to find anything.

So they decided to take matters into their own hands. Buying some fabric, they put Gina’s background in apparel design to good use; they created a pattern and were able to make a one-of-a-kind button-down shirt for their pup. Featuring a tropical print, the ‘BBQ shirt’, as they called it, quickly became the highlight of their annual party. Not only that, but their pup, Thomas, seemed to enjoy it too.

With that, they started to make different shirts for different occasions. Before they knew it, Thomas had so many clothes that he needed a closet of his own.

And other dog owners began to take notice. Everywhere they went, people would stop them for photos or ask them where they got his shirts. Ultimately, that’s what inspired them to open up their own business. They didn’t stop at dog-sized pullovers either, they also began making matching outfits for dog owners and a portion of each sale would go toward a non-profit animal rescue.

By the time they were on Shark Tank, they had been running the company—which had they named Dog Threads—for six years. They were ultimately featured in the seventh episode of the eleventh season, which aired on November 10, 2019.

Scott and Gina made their grand entrance into the tank with several pups, each of whom sported stylish shirts. Seconds later, they zipped off their jacket to reveal their matching outfits, which seemed to amuse some of the Sharks.

As Gina jumps into their pitch, Scott slides open the door of their display to reveal their doggy shirts, all hung up nicely in tiny clothes hangers accompanied by their matching human counterparts. The camera then zooms into shirts, each of which features a colorful tropical pattern, and with that, she tells them that they’re looking for a $250,000 investment for a 17% stake in their company, Dog Threads.

They go on to give each of the Sharks a sample of their shirts, though some of them seem to be more interested in the pups in the tank. For some of the Sharks, they even gave them matching outfits for their dogs and kids to take home.

Thanking them for the sample, Mark asks how they’ve been selling the products and how sales are going so far. Scott lets him know that 80% of their business is direct from their online store and 20% is through retail. Before anyone can say anything, however, Robert has already donned one of the shirts that he was given, which garners some chuckles from the other Sharks.

Continuing, Scott explains that most of their retail sales are their doggy shirts, which make up 75% of their business and the majority of their direct sales are of their matching outfits.

Asked ‘why’ the matching shirts, Scott and Gina tell them the story of Thomas and how they had originally made outfits for him before turning it into a business. They explain that while Thomas has since passed away, his legacy lives on with Dog Threads, which he had a part in creating.

Curious, Robert asks them how they turned the ‘cute shirt idea’ to a business. Gina answers by saying that she had gone to school for apparel design and that she had actually been creating her own clothes at the time when they came up with the idea. Realizing that there’s probably a market, they went with it and that was that.

Robert follows up by asking about their sales. Gina lets them know they’ve already sold $500,000 worth of shirts, which impresses several of the Sharks. However, the surprise quickly goes away once they tell them that they’ve started selling since November 2014. Noticing their reaction, Scott adds that the company had only been a hobby for them until a year and a half ago—that it wasn’t until recently that they started to take it more seriously.

Upon being asked by Mark, he tells them that they’ve only invested $500 in the business and that they’ve been reinvesting their profits, which impresses all the Sharks. Mark even says ‘why aren’t more people aren’t doing that’.

The next question they’re asked is about the cost of manufacturing the shirts. Mark also inquires about the products’ prices. Pointing toward their shirts, Gina lets them know that the small dog shirts cost $10.75 to make and have a retail price of $40 and that their human matching sets cost $21.50 to make and they sell it for $68.

Asked about their potential competitors, Scott says there’s a company that sells matching pajamas for dogs and humans but mostly for the holiday season. He emphasizes that Dog Thread is an entirely different product and that you can even wear them to work. With that, Mark asks whether or not they’ve done any licensing deals, which Lori agrees is a great idea for the product. Scott tells them that they haven’t, but that they are ‘100% open to it.’

Stating that Mark would probably be a better partner than her, Lori is the first to drop out of a deal. Thanking her for her time, Scott and Gina turn their attention to Daymond who admits that he’s a huge animal lover. However, he says that he can’t imagine himself wearing the same clothes as his dogs and for that reason, he’s out.

Mark proceeds to talk about their margins, which he believes, ‘isn’t there’ for the company be successful. Gina agrees that their margins are slim at the moment but says that they are currently looking at other manufacturers to potentially lower the manufacturing costs. However, she states that it’s difficult as they are only able to produce a small amount at a time due to a lack of funds.

Asked whether or not they can do t-shirts as well, Scott and Gina say yes. As soon as they do, however, Robert lets them know that he can’t get his head around the concept and for that reason, he’s out. He also tells them that he smells an offer coming from Mark.

And he’s right because the next second, Mark offers them $250,000 for a 30% stake in the company. While it’s higher than what Scott and Gina had hoped, Mark explains that he’ll also be able to help them with the licensing with the NBA.

The second he finishes saying that Kevin states that he’s also willing to make them an offer. However, Mark warns them that his offer is not here to stay. But that doesn’t stop Kevin from continuing to speak. Realizing that his offer might be in jeopardy, Scott asks Mark whether or not he can make a counteroffer, to which he says yes.

He then tells the Shark his counteroffer—$250,000 for a 25% stake in the company. Scott explains that it’s important for them to maintain high equity as they have a one-year-old at home and that they would like to build for his future. He also reveals that it’s actually their son’s first birthday today and that ‘they’re devastated to have to miss it. They even point out his picture in one of the displays, which earns some ‘awws’ from the Sharks.

After some chatter among the Sharks, Mark agrees to lower his equity share to 25%. Standing up from his seat, he walks up toward Scott and Gina and gives them a handshake and hug. The other Sharks also give the couple their congratulations; they even wish their son a happy birthday. Robert talks about his offer again but doesn’t have a chance to go into details as the couple leaves the tank after thanking him for his time.

Dog Threads is still up and running in 2022. In fact, they seem to be doing quite well. Following their appearance on Shark Tank, their sales went up (they are currently doing $365,000 a year, which is a considerable increase from when they were on the show) and they’ve managed to score a number of partnerships with other pet-related companies. There haven’t been any licensing deals yet, however. Perhaps they’re still in the works?

They’ve also expanded their product selection significantly. For one thing, they now offer t-shirts for dogs and their owners, which if you remember, was Mark’s idea (he had asked about them on the show). In addition to that, they also offer pajamas and pullover sweats. Additional patterns have also been added to their existing collections. They even sell accessories such as dog leashes and graphic totes, the former of which is available in various designs. Patches are also available.

In 2021, the company also received some buzz after Justin Bieber and his dog, Oscar, were spotted wearing matching red and blue Hawaiian shirts in an Instagram story. They even wrote an article about it on their website, which you can find here.

As of 2022, the company has donated over $37,000 to homeless pups around the world through their non-profit animal rescue partners, according to their official website.