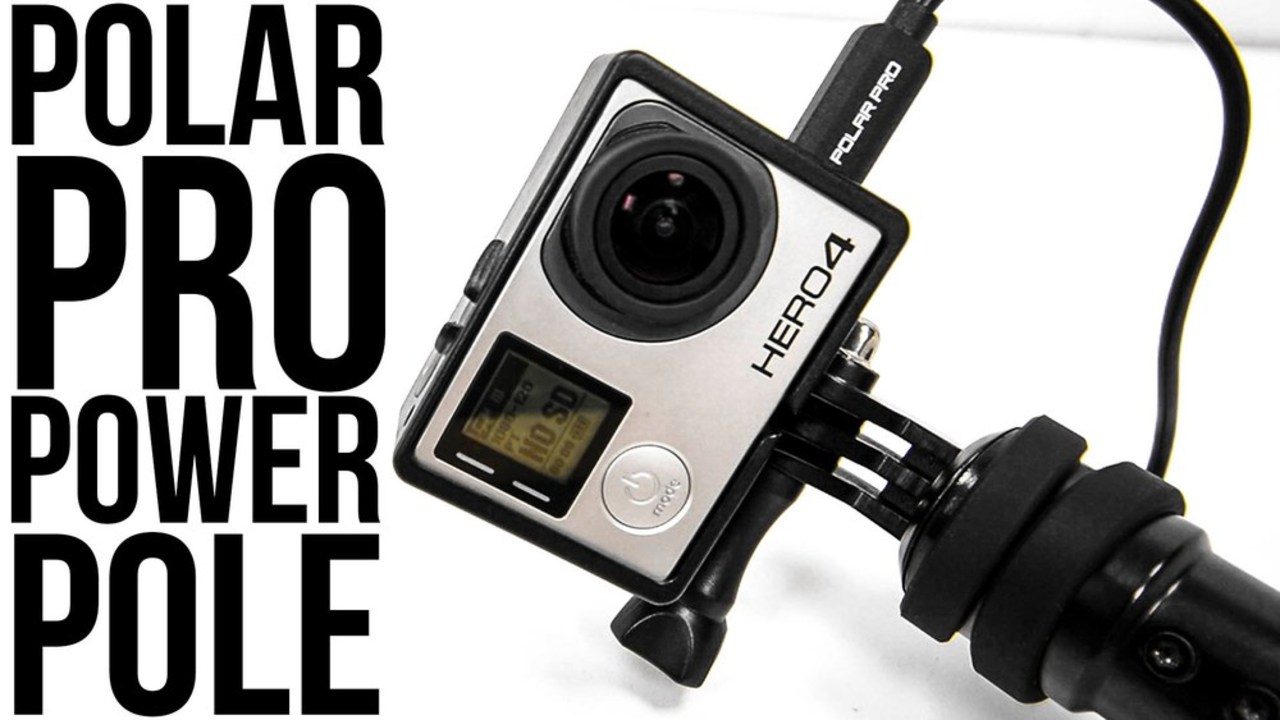 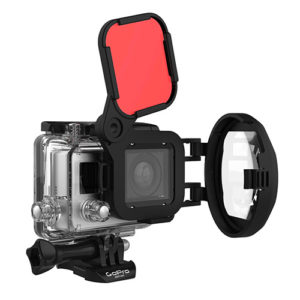 PolarPro is a company with a fairly simple premise. This California-based company is aimed at action sport enthusiasts and cinematographers around the world. Jeff Overall founded the company with the intention of designing, manufacturing, and selling different accessories, which are meant to be used in tandem with popular cameras like the GoPro. Entering the tank, Overall had a few signature products that he was most proud of. The first item that he intended to showcase was the PowerPole, a battery integrated GoPro extension pole. It may look like just your average “selfie stick”, but the unique thing about this product is that it allows users to charge their camera while they record themselves from different angles. This was PolarPro’s most popular product at the time, but he had a few others that he wanted to show off, too.

Another signature PolarPro product that he wanted to showcase was the PowerVault, an integrated battery charging case. The convenient carrying case allows GoPro users to charge multiple batteries or USB devices, regardless as to how far away they are from a conventional power source. In essence, the PowerVault is the ultimate portable charger. Finally, Overall wanted the sharks to see some of his drone filter sets. This particular product is meant to be placed over the lens of a drone camera, allowing drone users to capture vibrant and clear footage while still being able to protect the lenses that are mounted to their expensive toys. Entering the tank, PolarPro had a huge amount of product demand, and they felt as though an investment from the sharks could help push their company over the top.

Walking into the tank, Jeff Overall established a strong presence early on with a fairly weighty ask. He was seeking an investment of $500,000 in exchange for just 10% equity in the company. He showed off each of his products (the PowerPole, the PowerVault, and the drone filter sets) one at a time, and the sharks were impressed by the quality and ingenuity of his products. Daymond asked whether or not the products were actually selling, and Overall answered in the affirmative, saying that he had 31 different skews (or model variants) on the market at the time. Jeff was also quick to assure the sharks that PolarPro designed, manufactured, and marketed every product on their own. He also told the sharks that the drone camera filters was his most popular, best-selling item by far.

“What do the fillers sell for?” Robert asked. Jeff told him that the filters sold in differently sized packs. The three pack sold for $69.99, and the six pack sold for $149.99. Overall boasted a little bit about his profit margins, too, saying that they cost around $12 to make. Daymond was a little confused about what the filter actually did to image quality. Jeff explained that different filters did different things. He said that PolarPro sold polarizer filters as well as neutral density filters. Robert, in turn, asked the golden question. What have PolarPro’s sales been like? Overall went on to explain the meteoric rise of his company. In 2011, they made $8,000. From there, they made $2.8 million. That year, Overall stated, they were on track to make about $5.6 million. 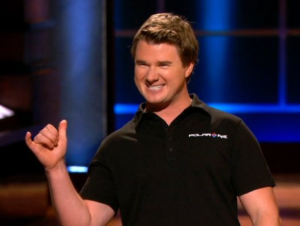 The sharks were impressed by these figures, to say the least. Lori asked how he could have possibly ramped up his earnings in that way. Overall took a moment to explain his strategy in managing the business. He took his profits and reinvested them, allowing him to create more accessories that other people had not yet made. Jeff explained that the PolarPro team was young and innovative, meaning that there was never any shortage of creativity or drive among them. Robert, who was impressed by this young guy’s enthusiasm, asked him about his background. Overall described his start as an entrepreneur, as a teenager selling crabs online. He then went on to describe the circumstances of PolarPro’s beginnings.

While he was studying at UC Santa Barbara, Jeff Overall was a member of the ski team. When he went to film his shenanigans from a camera, he was disappointed when he realized that his video didn’t look anything like a professionally produced ski movie. He did some research to determine what professionals were doing different. Overall found that most action sports producers use polarizer filters while they film, and he figured that he could make a business by selling them. Jeff explained how he used some of his money from student loans to get his business up and running. At this point, the pitch was running very smoothly for the young entrepreneur. The tides were changing, though. 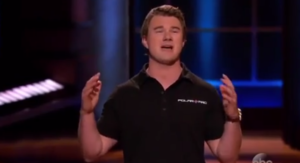 Kevin asked how much Jeff stood to earn from his $5.6 million profit. Jeff estimated that the profit at the end of the year should turn out to be around $300,000, which confused the sharks. He tried to explain that he wasn’t doing a lot to take profit, and that most of the money being earned was being reinvested into research and development. Mark said that, with the company’s margins, he should be making over a million dollars. Overall disclosed that he was currently spending over a million dollars on research and development at that point, with the majority of the money going towards tooling and product design. Knowing this, Kevin dropped out, stating that the computer electronics market was too competitive, and that PolarPro wasn’t made of the right stuff to compete with the big guys.

Mark didn’t seem all that deterred, though. He asked Jeff whether or not he was in any major stores yet, and Jeff explained that he was currently in numerous independent surf shops. He was still working really hard to get his product into big box stores like Best Buy or Sports Authority. Seeing the tremendous amount of promise in this market, Mark offered $500,000 for 10% of the company. This is exactly the deal that Jeff walked into the tank looking for. However, he stated that he was still looking to evaluate other offers that the sharks may bring to the table. Daymond asked Mark if he was willing to split the deal with him, increasing the equity given to around 15%. Mark respectfully declined.

From this point forward, there was an absolute feeding frenzy. Daymond threw up an offer of $500,000 for 15%, saying that he could help PolarPro with all of their licensing. Lori offered her assistance as a strategic partner, giving up $500,000 for 10% of the company. Robert argued that we thought the business would be able to grow faster with more money, and he formed a joint deal with Mark. They would both put $500,000 into the company and receive 10% in the company. Jeff was eager to accept this deal, and he would ultimately go on to grow his business with both Robert and Mark. Exiting the tank, he expressed his excitement for the future.

PolarPro Now In 2022 – The After Shark Tank Update

Jeff ended up receiving $1 million in exchange for a 20% stake, which was twice as much as what he was looking for. Thanks to that, the company has grown significantly. While they haven’t landed any deals with any major retailers, they have made it into several hobby shops. Their products are also selling well online. If anything, their appearance on the show only boosted their sales.

As of 2022, they sell various accessories including filters (for both smartphones and DSLR cameras) cables, tripods, lens covers, camera straps, and memory card cases. Some of their newest products include the Ultralight Matte Box, Litechaser Pro Mobile Lens & Filter System, and Quartzline FX Anamorphic-Style Streak Filters. They also offer apparel such as puffer jackets, rain shell jackets, fleece sweaters, short sleeve shirts, and long sleeve shirts. Prices range from $49.99 to $199.99+ and shipping is free within the United States ($25 for international shipping).

They’ve also partnered up with Otterbox, an electronics accessory company, to create a line of snap-on accessories for smartphones. For example, they’ve released speakers, fish-eye lenses, card readers, and batteries.

In terms of new products, they’ll be releasing a new camera backpack called the Boreal 50L next year. According to the product page, it’s made from 600D polyester and will feature a DWR coating, which makes it 50% thicker than traditional camera bags. The straps and stitching are also stress-tested at 100 pounds, so it will be able to carry even the heaviest of gear. The main compartment will also be oversized (with a depth of 6.25 inches) so you won’t have to worry about having to cram your lenses and camera bodies into the bag.

That’s not all, it’ll also come with easy-clip buckles, water bottle holders, removable hip belts, top key-drop pockets, and more. For those who are interested, the backpack is available for preorder from their official website; there’s no need to pay the full price upfront, you can reserve it for just $20 (the product will ship in April 2023). You can also sign up for notifications if you want to know when the backpack is launched but don’t want to make a preorder at the moment.

So yeah, the company seems to be doing fairly well. The last that we checked, they were on track to earn $4.7 million in sales. If you’d like to check out their products for yourself, you can visit their website here. They also have an Instagram page (@polarpro) with over 261K followers that you can follow for the latest news and announcements.