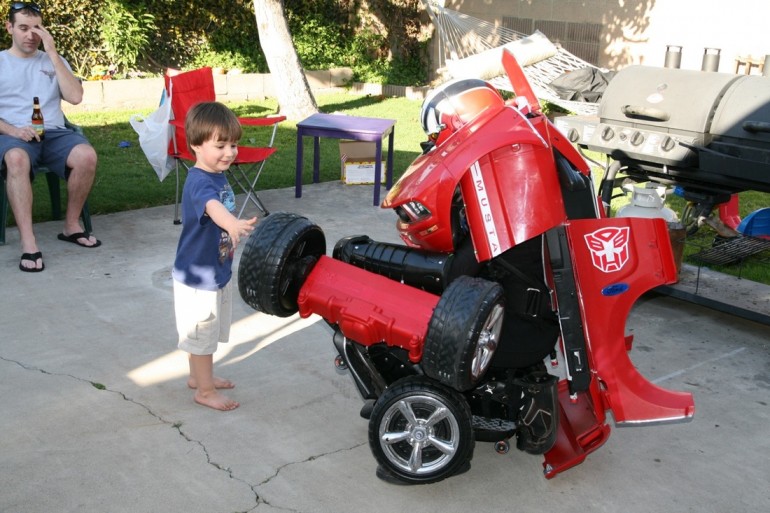 Drew Beaumier is a student of film and art. In his mid-twenties, he stumbled upon a truth that, to him, was self-evident. He discovered that robots are really cool. However, unlike most shower-thoughts of its nature, Drew decided to turn this one into his livelihood. He wanted to share his love of humanoid robotic vehicles with the world. In 2009, he entered an early prototype of his invention into a costume contest. The costume was a fully functional motorized transformer costume, which he dubbed the first of many Drive Suits. After success here, he spent the next few years refining and marketing the invention. He also put together an all-star team of performing mechanophiles to showcase his Drive Suits.

A few years after taking this show on the road and making tweaks, Drew was ready to mass-produce Drive Suits, for the joy of all children-at-heart. However, he didn’t have much to show for sales, so he would need a partner to begin mass-manufacturing and distribution. He also needed help with intellectual property, product optimization, and marketing. Put simply, his business was still in its early stages. Hopefully, the sharks would see the potential behind Drive Suits and share Drew’s vision for a future of bionically optimized children.

Drew and his crew made themselves the center of attention by piloting their Drive Suits straight into the tank. Barbara rolled her eyes, and Robert looked like he had found himself in a Toys “R” Us. For 20% of his business, Drew sought a $150,000 investment. He introduced Drive Suits as a sort of next-generation wearable technology, clearly capitalizing on the recent popularity of devices like the GoPro and smartwatches. Besides this, his value proposition with Drive Suits was their novelty. His suits drew heavily from the popular Transformers franchise. He decided to mass produce them when his clients asked where they could buy their own suits.

Looking a bit giddy, Robert asked for the product’s top speed and a live demonstration, marveling at the hand-controlled motor. As Robert performed his inspection, Drew explained that the idea for Drive Suits came from necessity. Several years before, he was short on rent money and waiting tables, eager for some sort of breakthrough in the film or art world. Meanwhile, he heard about a local costume contest with a large top prize. He figured that building his costume was just a way to get by, but it turned into a career. Barbara broke his stupor. She expressed some concerns about the product’s safety, especially if it would be sold to children. Ideally, it would be safer than standing motorized toys, but she didn’t look convinced.

As he is known to do, Kevin drew back the curtain. His question about Drive Suits’ shipping containers forced Drew to admit that he had no sales to speak of. He’d been counseled to iron out intellectual property concerns before selling the product, which the sharks thought was wise. Unfortunately, attempts to stake out claims had been unproductive. Drew owned the trademark to Drive Suits, but a provisional patent on the technology came and went with little to show for it. He couldn’t afford a full patent. He even had trouble providing details on production costs and other key statistics. While Drew claimed the $150,000 would fund AutoCAD designs, intellectual property, and a manufacturer’s request, he still seemed less-than-savvy in business matters.

Mr. Wonderful zeroed-in on this apparent lack of focus and provided some advice on the toy business. Drew’s next step was to court a major company in pursuit of royalties. He’d been attempting to drum-up hype at a grassroots level for years; he was ready for the big leagues. Kevin and Robert began to discuss what they thought was Drew’s biggest challenge: What proprietary information did he have to offer a hypothetical partner? In their eyes, nothing. He could be valuable for his experience, but nothing more. Mark thought his colleagues were taking the wrong approach. Drew should focus on the performance aspect of his business. This would mean thinking smaller and trying to create a viral following before approaching major companies for partnerships.

Kevin scoffed at this idea, and the two of them continued to butt heads for the remainder of the segment. Should Drew take the safer approach and accept his destiny as a “circus performer”, or should he take a risk and spend his time courting corporate suits? Drew asserted that the latter was his true goal. He wanted a smash-hit. It quickly became clear that Mark and Kevin were Drive Suits’ only paths to a deal when the other three sharks dropped out in rapid succession. For Robert, Drive Suits lacked the proprietary elements he was looking for. For Daymond, there were too many unknowns in the infant business, and Barbara was still concerned with safety issues that Drew didn’t anticipate.

Mark eased some of the tensions by making the first offer. He agreed with Daymond that Drive Suits was in its early stages, but he was willing to hold its hand for now. If Drew agreed that they would need to adapt and consider all income streams, including both manufacturing and live performances, he would invest. His number was $150,000 for 40%. Daymond and Kevin derided this offer, calling it “blood-sucking”. From their perspective, Drew would continue doing what he had done with Drive Suits for the last three years. He would build more costumes and hire an engineer with the investment, but it would likely go nowhere. The money would dry up, Drew would be back where he started, and Mark Cuban would own 40% of his business.

Kevin offered $150,000 for 30%, on the condition that Drive Suits landed a partnership with a toy company. This was a big if. Pitching a major company is no simple task. Additionally, it would leave Kevin with none of the potential risk and all of the potential reward. However, it was far more ambitious than Mark’s deal. Mr. Cuban defended his deal on two accounts. First, it would solve Drew’s issues with reserve cash. In an R&D-heavy business, simply having enough money to keep the lights on for another month can be critical. Second, Kevin wasn’t the only connection to toy companies. Any executive would be just as likely to take a call from Mark.

Drew weighed his options. Part of him knew that Mark’s deal might be his best option, but he couldn’t bring himself to give up on a big break. “I’m kind of a gambler,” he declared, as he took Kevin’s deal. Barbara and Mark couldn’t believe their ears: Mark Cuban had lost! Daymond was just along for the ride, laughing for a solid thirty seconds. The end of the episode, often host to some light bickering and closing remarks, was especially juicy this time around. The show runners decided to insert some of the most blatant product placement ever seen on television. Daymond held up his T-Mobile phone and snapped a picture of Mark’s defeat, much to his protest. “It’s too late, baby! I got my T-Mobile super-fast 4G!” Shameless promotion aside, Drew was just happy that he got a deal.

The deal with Kevin didn’t pan out in the end; it never got past the due diligence phase after filming. That didn’t stop Drew from moving forward with his business plans, which involved selling the transformer costumes to the public. He even offered to build anyone interested in a custom suit!

On top of that, he continued to entertain guests at various events. He had made a point that he “was not afraid to travel”, which ultimately helped his birthday party business.

At one point, he also appeared on the popular game show Let’s Make a Deal in full costume, where he won a couple of thousand dollars. In 2013, he also appeared on Happy Valley, a stage show that took place in Shanghai, China. He even posted a video of the event to his YouTube channel, which has since been viewed over 4,200 times. Speaking of which, he was also featured in the UK web series Rude Tube.

Since then, he’s renamed the company to Robots and Cars Entertainment, Inc. As of 2022, they’re still in business, though it’s unclear how much they’re making in terms of revenue. According to their website, however, they still offer transformer costumes (they currently offer RoboCars, RoboTrucks, RoboCycles, and Robotractors). The only thing is that they’re no longer available for purchase; they can only be booked for commercial events. They also offer group discounts for those who book more than two or more RoboCars.

Keep in mind, however, that prices aren’t listed on their website. You’ll probably have to contact their bookings manager for the specifics (they are only accepting bookings for business use at this time- their costumes are currently not available for personal use). You can also send a message to Beaumier directly through their contacts page. For more information, you can check out their website.

As for whether or not he will be returning to the tank, our best guess is no. For one thing, it has been several years since he was on the show. While he hasn’t abandoned the business, he has obviously moved on to other endeavors with the company.