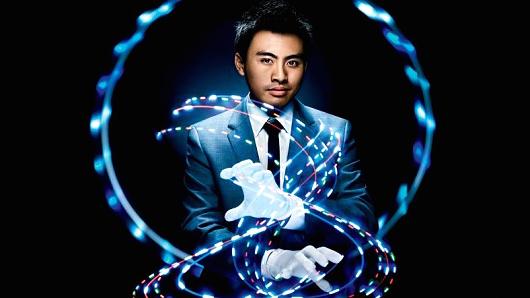 Brian Lim is the founder, and owner, of Emazing Lights, and has come to the Shark Tank to seek $650,000 in exchange for 5% of his company. Immediately, the Sharks are interested in the extreme valuation of the company. Brian then demonstrates exactly what the products he has brought in are, as he is wearing an interesting pair of gloves along with an odd choice of headgear. The latest dance craze is called “gloving,” and Brian has brought with him three dancers to showcase. For this performance, they intend to “borrow Kevin’s heart.”

One of the dancers steps up, and the room fades into a dim glow. The dancer reaches his fingers out to Kevin’s heart, and the tips of the gloves he is wearing light up red, giving the vision of Kevin’s heart being sucked out. Performing tricks with the gloves such as passing Kevin’s ears through his head, the dancers then begin to perform exaggerated motions with extreme emphasis on their hands and fingers, which are lit up with the glow of the implanted LEDs in the cloth gloves. The third and littlest dancer even steps up to perform, and while all of the Sharks reveal in their eyes that they don’t even know what to say, they applaud the effort and the cool-looking glow effects. Kevin looks completely lost.

The littlest performer, Lila, hands out a pair of gloves to each one of the Sharks. Robert immediately asks how to make them work, and Brian explains that you simply have to move the glove up and down in order for it to change colors. The second Robert starts waving his hand around, his eyes light up with wonder, and the Sharks are suddenly invested in the pitch again. There is an option for up to 50 modes, and there are 20 colors that can be combined in unlimited combinations.

Gloving is already moving from a subculture to popular culture, Brian explains. Kevin asks how big is the gloving market, because there is a valuation of $13 million dollars on the company, which is one of the biggest deals to ever come to Shark Tank. Kevin then asks about the sales of Emazing, and since starting over 4 years ago, Emazing has generated $13 million dollars in revenue just through sales alone. In the year of filming this episode, the projection was an estimated $5.5 million dollars in sales, and they are currently on track to reach that projection. While the bulk of the sales is in the gloves, the primary product, there are some additional forthcoming products that are at the patent pending stage.

With the profits from Emazing Lights, Brian has actually taken $100 of the profits and started a company named “I Heart Raves.” I Heart Raves caters to all the festival-goers and provides wild apparel, and in just under two years of existence, I Heart Raves has been responsible for generating $1.4 million dollars in revenue, and they are on track for a $2.5 million year this year alone. Brian confirms that he is selling equity to both businesses together. The total for the sales this year alone for Brian’s companies are $8 million in sales.

Lori asks about Brian’s background, and Brian explains that his parents immigrated from China to escape communism. Watching his parents work 18 hours a day gave him a strong work effort, and when he realized all that his parents gave in order to give him an excellent life, it made him that much stronger. His parents gave him an education, and he grew up as an entrepreneur burning CDs and selling them. Although he never knew what product or service he would sell, he always knew he wanted to own a business. Brian grew up with gloving and fell in love at his first lightshow, since he was attracting crowds of people around him, and he wanted to share the feeling with the world.

During the performance, the performers pulled out a spinning LED prop, which Daymond asks about the patent of. Brian confirms that the patent is pending for the programming method of the lights for the gloves and the prop that was used, which prompts Lori to ask how many other people are out in the gloving market. Brian is sure that he owns at least 75% of the worldwide gloving market, but sales show that they account for about 80% of the sales. There are 4 or 5 other companies that are in direct competition with Emazing, of course, but their sales or products are nowhere near enough to be worth worrying about. 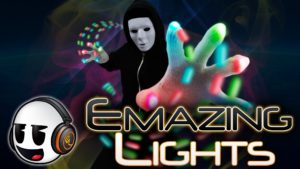 Mark admits that what Brian has done is absolutely amazing, but the reality is that there is a very good chance that the business becomes transient and is a fad – it could die off just as quickly as Brian became a near-millionaire. However, there is a lot of money to be made off exploiting fads, and there are a lot of things that have become a big product in just their niche. Brian then explains, the gloves range from $20 to $120 for the pair of gloves that the Sharks were given. The difference between the $20 model and the $120 model is customization, such as programmability and being able to customize the modes you are able to use, all the way down to the quality of the lights used. The more expensive gloves have better, more vibrant lights.

The cost to produce each glove ranges from $10 for the basic model, all the way to $17 per customized model. Brian custom-designed the gloves and licensed the tooling and manufacturing, and the gloves are actually manufactured overseas in three primary locations. Mark then asks what is next for Brian’s company, and Brian says that he is excited for the sport of gloving, not just the fashionable dancing of it. Gloving has become a professional sport, and the International Gloving Championship has actually been created by Emazing. Emazing is responsible for creating the rules, the judges, and the very floormat that the dancers perform on.

Robert asks for more specifics about the sport, which Mark explains that gloving is a performance art – it’s whoever gives the best performance. Daymond compares gloving to breakdancing, with the feel and the swell of breakdancing becoming something huge and memorable. Brian is creating his own industry, essentially. Gloving isn’t genre-specific; while gloving was once started in the electronic dance music (EDM) scene, it has moved onto hip hop, trance, rave, and many, many other different types of musical subcultures. The bottom line, however, is that somebody sees gloving and thinks that it’s an automatically cool thing because of the lights.

Robert points out that Brian essentially created the competition for his own industry, which drives sales. He then asks how the gloves are sold, which the gloves are primarily sold online, but there are 3 licensed stores that are able to sell the Emazing products, as well. The expansions overseas are going to focus on Japan and Australia, which are the two markets that are growing the biggest process. With the money investment from the Sharks, Brian intends to scrutinize the hiring process to keep bad people out and only bring in passionate gloving enthusiasts. 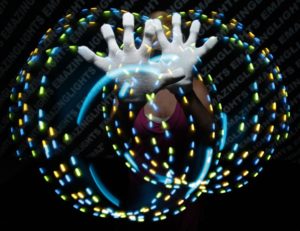 Kevin is the first to make an offer, citing the transient view as something that makes him nervous. Although, he sees Brian as someone who has been making a lot of money and grinding hard. Kevin offers a loan of $600,000 in exchange for 3% equity, but this will give Brian the money to grow his company. Brian immediately refuses the offer, looking to bring a Shark on board in order to help him manage the day-to-day functions of the company. Kevin exits the deal.

While only asking for 5%, Brian reaffirms that he is here in the Shark Tank primarily to find a partner for his business. Daymond then makes an offer of $650,000 in exchange for 20% of the licensing that Daymond will bring to Emazing Lights, with absolutely no equity traded whatsoever. Robert then says that he thinks Brian is the best entrepreneur to ever appear on the Shark Tank, and both him and Lori will make a joint offer. They want to help Brian grow, making an offer of $1 million dollars in exchange for 8% equity.

Mark jumps in with Daymond’s offer, combining a joint offer of Mark advertising the products prior to the Dallas Mavericks games. The combined offer is $650,000 in exchange for 5% equity in the company, with the added 20% commission on any licensing that Daymond brings to Emazing.

Lori and Robert again revise their offer, down to $1,000,000 cash in exchange for 5% of the company, putting the valuation of the company at $20 million dollars. In the end, Brian accepts the combined offer of Mark and Daymond, scoring the fashion expert Daymond and the sports savvy Mark as partners in Emazing Lights.

Emazing Lights Now In 2022– The After Shark Tank Update

The deal with Mark and Daymond was finalized soon afterward. Being on the show also gave the company exposure, which caused their sales to spike. Within a few months, they had to double their staff to keep up with the constant stream of orders. Not only that, but they also had to increase their office space.

With the sharks’ help, they also landed a licensing deal with MGM, who agreed to sell their products at six of their Las Vegas properties. And the timing just so happened to coincide with EDC Las Vegas, North America’s biggest EDM festival.

Fast forward to 2021 and they have acquired a 3,000-square feet warehouse. That’s not all, they’ve also hired 50 full-time employees.

As of 2022, the business is still up and running. If anything, they’re more popular than ever. In 2021 alone, they made more than $20 million in revenue. Some of their current bestsellers include their eLite ezLite 2.0 Glove Set, Spectra Evolution Glove Set, Recharge Refresh Combo Deal, Emazing Magic Stretch Gloves, and Chroma Evolution Glove Set. Not only that, but they also offer Flow Arts, such as LED Levitation Wands, POI Balls, and Fiber Optic Whips. Various LED orbits are also available.

As far as pricing goes, it depends on what you get. For example, their eLite ezLite 2.0 Glove Set goes for $49.95 while their LED Orbits range from $24.95 to $34.95. It’s worth noting, however, that they do have a sale section on their site where you can snag some discounted items. That’s not all, they also have site-wide promotions from time to time—you just have to check their website.

Shipping is also free if you order more than $80 (otherwise, you have to pay for standard shipping, which starts at $4). They also offer a 30-day money-back guarantee so if you change your mind or are not completely satisfied with your order, you can return the product for a refund.

In addition to that, they also sell apparel and accessories such as hoodies, t-shirts, masks, boxers, joggers, shorts, hats, and glasses.

They’ve also launched a Promoters Program, which allows influencers to work with their LED products. Not only do they send them to music festivals, but the company also hosts global online and in-person gloving competitions. And those who participate receive monthly cash payouts every month. They’re not tied to their brand either so they can promote with as many different companies as they’d like. They’ll also receive exclusive sneak peeks regarding new products.