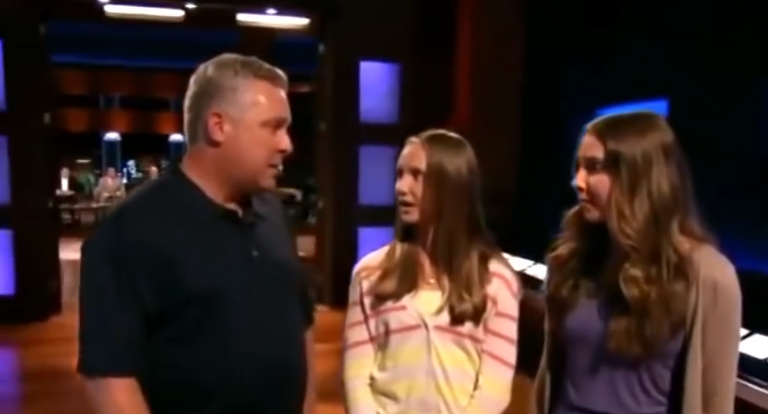 Screenmend was founded by the Hooks family of Lily, Emma, and Brian who were trying to solve the common problem of patching a screen. Lily was only twelve when she came on the show while Emma was fifteen, but they had come up with a successful product and had interest from retailers. The patch Brian, their father, was using to fix the screen kept falling out so Lily recommended a screen with wax. After the patch stayed on for more than a year, they knew they had solved a problem and started creating the product out of their home. They had only sold around $4,000 worth of product before coming on the show. They also had a provisional patent, but not a utility patent as they had reinvested all the money back into the business. The family applied to be on Shark Tank by sending in an audition tape as they needed help in multiple areas and they were chosen to be on season five.

The Hooks family entered the Tank seeking $30,000 for 25% of the company. The family explained how they were trying to patch a hole that their bunny made, but couldn’t get anything to stick which led Lily’s idea of using wax along with a screen. As Emma handed out samples to the Sharks, Lily demonstrated how to use the product by attaching it to a screen and blowing it with a hair dryer. Daymond asked for the numbers and Brian mentioned that they had only sold seven-hundred fifty units, but were selling them for $6.95 and it only cost them $0.31 to make the product along with $0.53 for the packaging.

The discussion then went back to the product as the Hooks family explained why Screenmend was better than competitors such as their product staying on longer. Robert asked Lily why they needed the money and she mentioned that they had interest from Bed Bath and Beyond and Home Depot, but the retailers did not like the packaging which is what the money would be used for.

Daymond was the first to mention that he loved the family, but that it would be too much work for him because the family did not have a business background so he went out. Kevin and Robert were also supportive and emotionally attached to the story, but went out for the same reason as Daymond. Mark jumped in and told the Hooks family a story of how a small investment helped him get a stamp business started when he was sixteen which he was really grateful for and wanted to provide the same support to the Hooks family. He offered them the $30,000 at 25% which is what they wanted. Mark said he didn’t know much about the business they were in, but could find people that did. Lily and Emma were eager to take the deal, but Lori quickly stepped in and made an offer of $30,000 for 50% and wanted Mark to go in with her. Lori said she wanted more equity because of the work she would have to put in such as taking over manufacturing, but did have the connections to help their product. Mark did not want to negotiate and stuck with his original offer.

The family stepped outside to discuss both deals as Brian explained to his daughters how Mark was being generous, but Lori was willing to do more work. Seeing the benefit in the latter, the Hooks family stepped back in and took Lori’s offer. Mark immediately congratulated the family and was not disappointed as he was happy to see them leave with a deal.

The deal with Lori successfully closed. The ‘Shark Tank effect’ also caused their sales to skyrocket. For an entire week after the episode aired, they sold a unit per minute. A number of retailers also approached them about the product. Not only that but they also started manufacturing the product “in-house.”

The company later received an update segment, which was included in episode 606. In it, it was revealed that Lori had kept her promise and had gotten the product on QVC, where they quickly sold out. Not only that but she also redid the packaging and got them into Bed Bath & Beyond, Home Depot, ACE Hardware, and Lowes. By then, they had done more than $900K in sales.

Two years after their initial appearance on Shark Tank, the company was acquired by Spark Innovations, a company that develops consumer product brands, for an undisclosed amount. The last that we checked, however, Lilly, who is set to graduate from the University of Alabama this year, is still the company’s president, albeit on a part-time basis. As for Emma, she graduated from American University back in 2019 and is currently pursuing an acting career.

As of 2023, the product is still available for purchase on Amazon; it’s currently listed for $14.99 (it’s on sale at the time of this writing). If anything, most people seemed satisfied with the product, with many commenting that it’s very easy to use as long as you follow the instructions for applications.

However, many people have stated that the patch itself doesn’t blend with the screen so you can tell that they’ve been patched. Depending on how it’s applied, it can also look a bit tacky. Some people have also had issues where the patches eventually fall off so it’s probably only good as a temporary fix. Having said all that, the general consensus seems positive (the product currently has a 4.2-star rating on Amazon).

It’s important to note, however, that their website is no longer online. Rather, it now redirects to a completely unrelated screen repair business called Screen Force. Our best guess is that they didn’t renew the domain and it was snatched up by another company. Their social media pages have also gone un-updated for several years. Take their Twitter account, for example, their last post was from 2019. Despite all that, the company seems to be doing fairly well from Amazon sales alone. As of 2021, they were making $5 million in revenue a year.