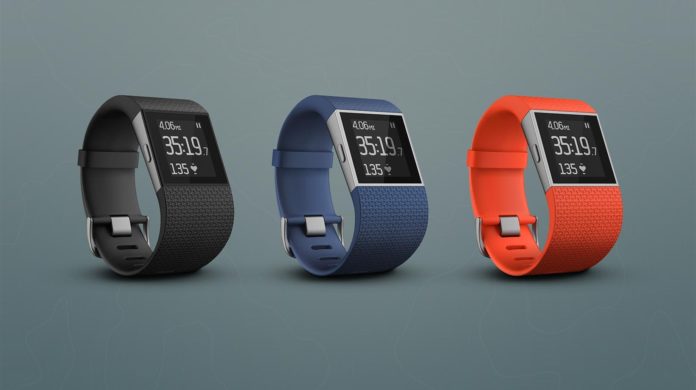 I don’t live a very active lifestyle. My passion is graphic design, and my job is being a writer for GazetteReview. Though I love it, it isn’t the most active combination. Every day, I think “this is it – I’m going to turn my life around. I’m going to wake up early, go for a run/walk, eat healthily, exercise, and sleep early”. And yet, here I am – a close-to-not-existing-anymore ~47KGs at ~166cm tall. The trick? Another health tracker? Self-motivation? While I lack the latter, I do have a health tracker. Is it enough to push me towards being perhaps a normal weight? Let’s see in this review.

The Fitbit Surge is almost the most expensive tracker in the long line of Fitbit trackers. It’s the first to have such a large display, and it’s also the first to feature GPS tracking, for tracking runs. Announced in 2014, it’s a few years old now, but it’s still being sold in stores, at a pricey $250USD. Among it’s feature list is heart rate monitoring and GPS tracking, and it has a large touchscreen display for navigating the UI.

The Fitbit Surge features an… unconventional design. Alright, this thing is damn ugly. The band is as wide as the body itself, and it’s made of rubber. The screen, although larger than the ones found on other Fitbit trackers, is still tiny compared to the large, bulky body of the watch. Even though it’s hideously thick, the band and watch are designed like that to ensure a tight fit, so it doesn’t fall off – even if you’re running.

It’s not a classy design, either, so it wouldn’t go well with a suit or with any semi-formal attire. It’s suited better for running than it is as an everyday watch. However, if it’s not your everyday watch, it can’t track all the vitals you spent $250 to track. The Fitbit Surge comes in three colors; Black, Blue, and Orange. Personally, I favor the Black version, since it at least somewhat works with casual smart wear.

Sporting a touchscreen monochrome LCD, it isn’t the most beautiful watch. However, does it make up for it with it’s features? Not really. Yes, it tracks your heart rate, your sleep, and even your altitude, it doesn’t do that much more than an Android Wear smartwatch. Yes, it’s made by Fitbit, a sports-centric wearables manufacturer, but other than that, it lacks a lot of features that Android Wear smartwatches have – namely, apps. Both Android Wear smartwatches and the Fitbit Surge can display notifications pushed from your phone; the Surge is unable to run any apps of it’s own, aside form the ones Fitbit have included. This means you won’t be able to check your calendar from the watch or play games on it.

Sure, Android Wear smartwatches are a little more expensive and don’t have as good battery life, but they also have a color display, as well as many many more features. Heck, some can even replace your phone entirely, though I don’t know how I feel about that concept. The bottom line is, if you want a super activity-centric tracker, get the Surge, but if you’re looking for anything more for just a little more cash, go and buy yourself an LG G Watch Sport, or something similar.

Tracking and connectivity with the app

The Fitbit Surge works only with the official app from Fitbit. It’s a relatively good app, and it’s easy to use. It’s built well, and looks nice too. Activity tracking data is transferred wirelessly from the Fitbit Surge to the phone, whether that be an Android or iPhone. Tracking itself is simple too – everything happens in the background, and you don’t have to do much to make it work. Since it isn’t a feature-rich smartwatch, there’s next to no user input needed, unless you want to view information directly on the smartwatch. The tracking figures are accurate, and the GPS works well. The GPS is one of the standout features of the Fitbit Surge. It works decently well, but it isn’t the most accurate of GPS trackers. It’s one of the only features which set it apart from other fitness trackers, but I don’t find it that useful.

Syncing is easy, as it all happens automatically, and it’s uploaded to Fitbit’s servers through the app. If you own an iPhone with Apple’s “Health” app, you’re out of luck, since the official Fitbit app doesn’t work with Apple Health. However, you can download a 3rd party app, “Sync For Fitbit”, which takes data from your account on Fitbit.com and syncs it with Apple Health. I’d recommend you just stick with the standard FitBit app, since you can also track your food and calorie intake.

There are next to no customisation options, since the Fitbit Surge and it’s operating system is a closed system. Fitbit won’t allow 3rd party watch faces, so you’re stuck with the ones that Fitbit provides. While you can change the strap, Fitbit doesn’t sell straps for it any longer, so you’ll need to scour eBay and Amazon if you want to change the color of your strap.

The Fitbit Surge is an expensive piece of kit. At $250, it’s one of the most expensive activity trackers on the market right now. That’d be ok if it had the features to back it up, but it doesn’t. It’s severe lack of smartwatch-like features set it firmly in “tracker” territory, which, for $250, is far far too much. It’s an excellent tracker, definitely, and it has its place in the market, but it’s simply too expensive for what it is.

The Fitbit Surge is one of the most expensive, ugly trackers I’ve ever used, and it’s lack of features put it in an odd “luxury” section of the tracker market. It doesn’t have much going for it, other than the fact that you can trust it’s tracking since Fitbit makes it. If you’re really into fitness, and you want a good, premium, reliable tracker, this might be the one, but if you want it to do a few more things, you may want to consider an Android Wear smartwatch. Is it enough to get me to change my life around and become a better person? No. Maybe tomorrow.