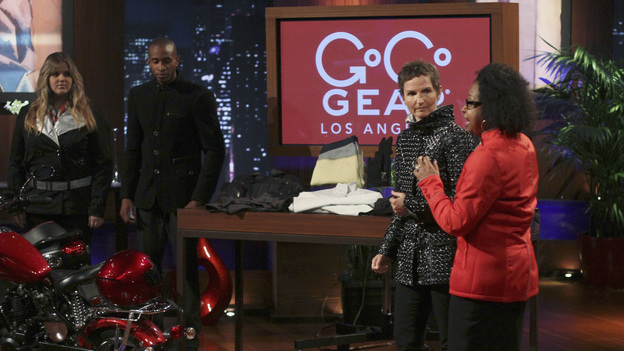 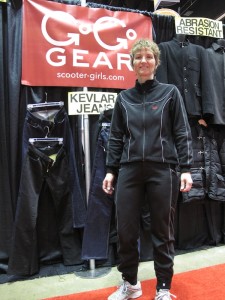 Desiree Estrada and Arlene Battishill are the creators of GoGo Gear. The stylish garments are designed to protect motorcycle riders. Bringing to the table an innovative idea, GoGo Gear is not just another type of protective equipment. It is designed to be worn not only on the bike, but also on the street or in the boardroom. The clothing focuses on couture, in a market where leather is king.

With a focus on women riders, who are more prone to try this fashionable look, although they also have a section for men, this type of clothing is nothing like one would expect from motorcycle gear. Don’t be fooled though. While the clothes look delicate, they have reinforced Kevlar lining the insides and reflective safety straps that can be made visible easily.

After a few years of business, not to mention investing $400,000 and facing several difficulties, the creators of GoGo Gear decided to take their product on the ABC show Shark Tank. Not only for the $300,000 investment that they were seeking, but also for the exposure to 6 millions viewers, a win-win scenario from a marketing perspective.

GoGo Gear In The Shark Tank

The pair entered the Shark Tank seeking $300,000 in return for 15% stake in their company. The two creators entered the room wearing stereotypical bikers leathers, in order to demonstrate a before and after effect by taking the normal gear off and showing their fashionable GoGo Gear underneath.

Initially, The Sharks were impressed by Battishill and Estrada’s idea. However, as the questions began to flow, The Sharks discovered that even though the creators presented a unique idea, like many entrepreneurs, they failed to offer a clear business plan.

At one point, Kevin O’ Leary asked the creators about specific sales figures, and Battishill responded to him by saying that she and Estrada had one hundred and seventy two thousand in sales during the last year. She also mentioned that GoGo Gear is currently sold in many specialty motorcycle stores.

The peak of the negotiations occurred when Mark Cuban asked the two creators a question regarding their future plans for the business. “Show me that I can trust you with my money,” he demanded. “What are you going to do with the money?” Enthusiastically, Battishill responded, “We are going to Europe,” and she then began explaining the difference between the US based market and the European market, which is significantly bigger.

Cuban expressed apprehension due to the errors Battashill and Estrada committed in the past with their business. To The Sharks, it was evident that the founders were incapable of properly managing a large company. In addition, the $2 million valuation gave The Sharks the impression that Battashill and Estrada weren’t realistic and the whole business was not one with a “laser focused” marketing plan, but rather just an idea taken too far by a very optimistic pair.

During negotiations, Kevin O’Leary was the first Shark out, and his reasoning was the valuation of the company, Mark Cuban called Battashill and Estrada “cockroaches” by comparison to the heavy hitters in the biking business, and he highlighted the fact they don’t have a proper marketing plan. Barbara Corcoran expressed her belief that the pair were far too unrealistic regarding how they would fare in the Euro market, she chose to back out. Robert Herjavec agreed with Cuban and proceeded to back out as well. Meanwhile, Battashill and Estrada attempted to raise the equity from 15% to 38%, without any success. The only Shark left was Daymond John. 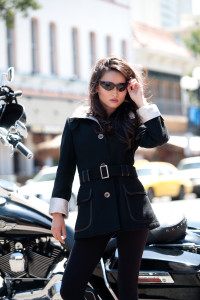 The two creators consulted and came back with a better offer for John. Meanwhile, Herjavec spoke with John about getting back in the deal if he was offered more control over the business, which didn’t have a clear marketing plan. Estrada offered 55%, but it was refused. John was willing to accept the offer, but Herjavec stood firm. Battishill raised the stake to 65%. But even that wasn’t enough for  Herjavec, and he remained out. In the last few minutes John decided to opt in, and GoGo Gear received the $300,000 that they were looking for.

Despite what transpired on the show, the pair never received the $300,000 from Daymond. According to Arlene, the two parties had decided not to proceed with the deal due to the effects of the recession, which caused them to lose 8,000 retailers in one year. Daymond did, however, offer to be an advisor for the company.

In the end, they “hunkered down” for a couple of years after the show; it wasn’t until 2015 that their business began to take off. By 2016, they had started selling their products in Europe and that alone had increased their sales tenfold overnight.

That’s not all, they also began selling their products on Amazon. Ratings, however, were mixed. While some praised the quality of the material, others were less than satisfied with the sizing. For instance, many found that the pants ran small (e.g. short inseam), which made them hard to get on and off (the fact that they’re double-lined doesn’t help either). Still, there were many happy customers.

Fast forward to 2023 and Go Go Gear is still up and running. Not only do they offer protective leggings, which are made of 100% Dupont Kevlar Fibers, but they also offer protective riding pants, jackets, and hoodies. And of course, they’re all abrasion resistant. Take their armored jackets, for example, they come with removable CE-approved armor in the back, shoulders, and elbows area.

For those who are interested, there are eight sizes available: XXS, XS, S, M, L, XL, 2XL, and 3XL. In terms of price, it depends on the product. For instance, their armored hoodies go for $149 while their armored leggings go for $169. They also have a clearance section where you can snag some older styles for a cheaper price. For instance, at the time of this writing, they have ventilated jackets that are marked down from $179 to $59. Not only that, but they also have leggings on sale for $159 (down from $169).

They also offer international shipping through the US Postal Service. Keep in mind, however, that you will have to pay the initial shipping cost on orders (any costs associated with exchanges or returns). With that said, they do offer free shipping from time to time. You just have to keep an eye out on their website for any promotions.