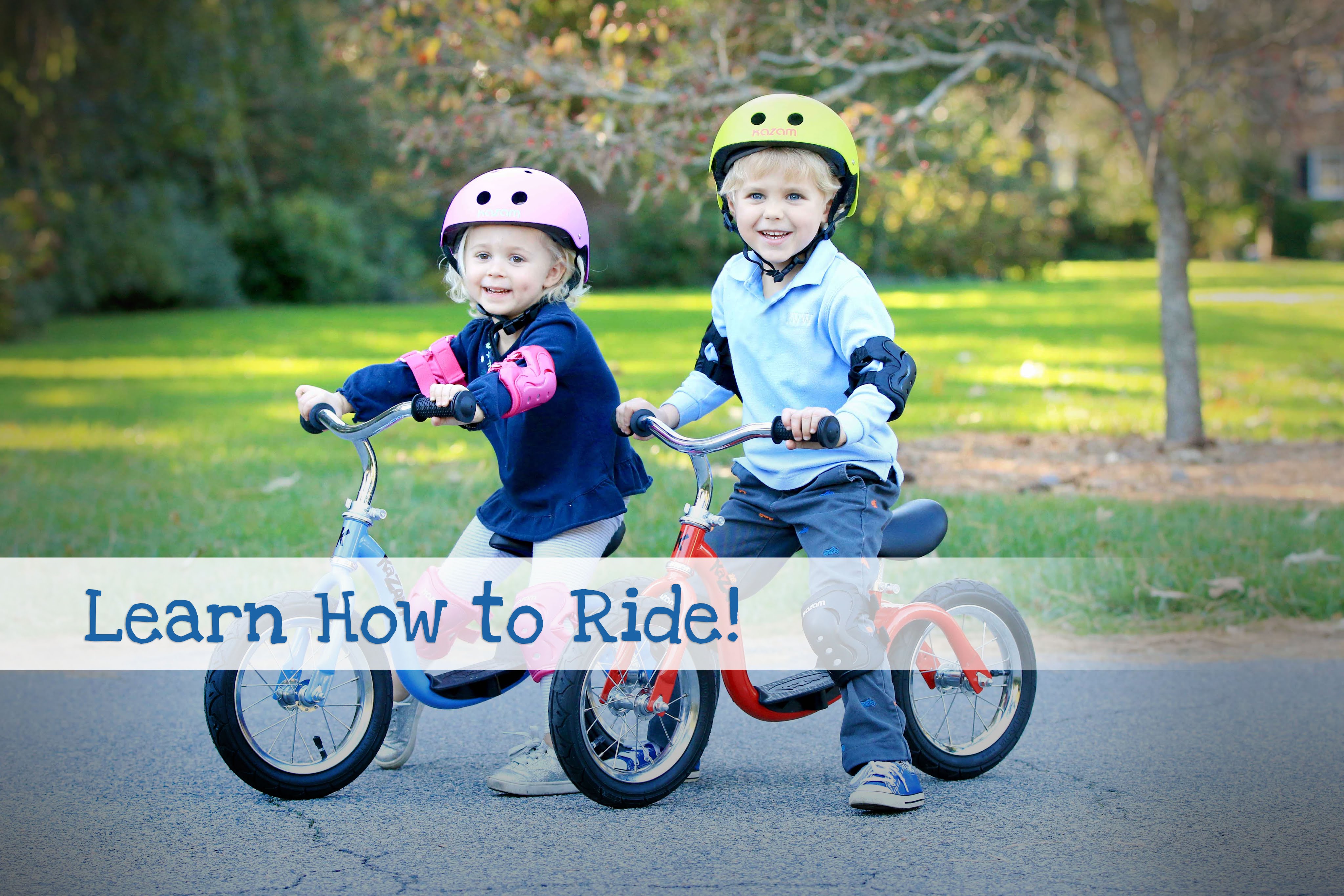 Before she appeared on Shark Tank, Mary Beth brought her balance bike business, KaZAM, to a $1.5 million business. Would the Sharks see the value in that, and decided to invest in Kazam’s future? Let’s take a look. 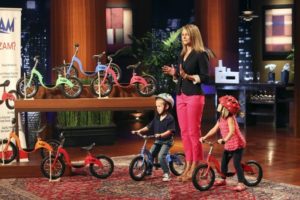 Mary Beth Lugo walked out into the Shark Tank, preceded by two small children on what looked like standard bikes. Mark and Barbara looked charmed, but Kevin looked like he was wondering who let vermin into the room.Mary Beth introduced herself to the Sharks. She asked them for $300,000 in exchange for 20% equity in her business. She said that the product, KaZAM is a “balance bike” that helps kids out when they are learning to ride. The camera panned to the bike that the little boy was riding as Mary Beth narrated. The bike he was riding did not have any pedals. She stated that the most important part of learning to ride a bike is balance. Since bike riding is a one step at a time process, the KaZAM bike allows kids to learn by themselves at their pace. This supposedly makes it easier for the child to transition to a regular bike.

She said the KaZAM would help kids learn a life skill while letting them enjoy themselves. Mary Beth wanted to know which one of the Sharks would “Ride the revolution with her. Kevin told her that she should send the children off of the stage since he had a bunch of questions that they would not want to hear. The kids scooted off the stage. It looked like they were having trouble getting the bike going. Daymond asked her what the cost per bike was versus the retail price. She said that she makes them for $28.25, and wholesales them for $45. They sell directly to the consumer for $99.95.

Kevin said that he had the option of buying training wheels for $19.95, or a KaZAM. He said it was an outstanding choice for a family struggling to make it in the economy. Kevin stated that they outcome would be the same since children had been learning how to ride bikes since their invention. Mary Beth insisted that the KaZAM was improving the learning process. Barbara asked her how she came up with the idea. She said that the concept has been popular in Europe. She had a neighbor who was European who introduced her to the idea. Her two-year-old son learned bike riding on that device very quickly.

Mary Beth said that she made her version of the European model. She had a patent on her product. Barbara asked what age category the KaZAM was meant for, and Mary Beth told her 2 to 5. Daymond said that he was curious as to why the European company was not selling in America if the product was profitable. Mary Beth admitted that KaZAM was not the only product in the United States, but she distinguished herself with the design of the frame with the foot rest.

Kevin wanted to know how much the competition is selling. Mary Beth said that the market was fragmented with 5 or 6 small companies. Mark wanted to know about her sales to date. Mary Beth said that they had done $1.4 million in the last three years or so. Robert wanted more information, asking what the sales were last year, ad the year before that. She said that last year they did $611,000, as compared to the year before where they did $384,000. Robert looked impressed. He told her she was experiencing healthy growth.

Kevin wanted to know what the sales projections would be for the next year. Mary Beth said that the projections were for $1.5 million, which is more than double what they did this the year that they went on Shark Tank. Robert wanted to know what their profit looked like on that one million dollars. Mary Beth said that the profit margin was about 37%. Kevin said that the margins aren’t enough, and he wanted her to get them up to 45%. Mary Beth explained that they were in a situation where they were batch manufacturing, in which they produced a limited amount of bikes. Kevin asked if she knows how much she would have to increase production to get the margins close to 50%. She said that she would have to produce 50,000 bikes at a time, which is more than 25x what they were doing now.

Kevin said that it would be fantastic growth if she maintains it, but it sucks up a lot of cash. Kevin stated that she would require a significant amount of capital to be worth investing in. He went out. Mary Beth nodded and said that her target market is not just the toy and bicycle industry, but also the education and occupational therapy realms. Robert asked if she’d tried entering the European market, or if all of her sales just from America. She said that KaZAM just got picked up by the largest sporting goods store in Europe.

Mark wanted to know what else she would use the $300,000 for, besides just production. Mary Beth said that she had a two wheeled bike in mind, for the KaZAM graduate. Kevin asked her why she would take a leap into that competitive market. He told her that she could just buy a children’s bike for $39. She said that she had a loyal customer base that was looking for a quality product. Kevin stated that he forbids her from doing that. He went out a second time. Robert told Mary Beth that it sounded like she was the market leader in the KaZAM arena, and it scared him that she was walking away from that success to try something untested.

Mary Beth told him that she was always getting asked by her competitions when she was going to introduce a step up. She wanted to create a brand. Mark told her that she would drown in opportunity. He told her that just because someone asks, doesn’t mean she should jump on it. Robert said that he liked her sales and the answers to the typical questions. He stated that he would not buy one, but he understood why someone would. Robert was just not personally invested in the product. He went out.

Daymond said that he feels like she has an excellent concept, but does not think that he would get his money back once he gave it to her. He also went out Barbara said that she was concerned about KaZAM’s competition. It was not simply the tricycle market; it’s also the training wheel market. She stated that Mary Beth appeared to be mild-mannered, and Barbara was unsure of whether or not she had the focus to overcome the competition. Mary Beth looked shocked. She expressed her surprise and said that she was the one who was running all the business activities and day to day operations. Barbara agreed that she seemed organized but still did not believe that she had a burning passion for the firm.

Kevin asked if she would feel comfortable pouring boiling oil over her competitors. Barbara clarified that that was what she wanted from Mary Beth, but in a nice way. Robert asked Barbara if she didn’t think Mary Beth was aggressive, and Barbara admitted her uncertainty. Mary Beth said that she wanted to eliminate her competition, but the Sharks did not appear to be buying it. Mark piped up, saying that she had to be willing to squish the necks of the other businesses in this market. Barbara said that she gives excellent, articulate answers, but she was missing the fire behind it.

Mary Beth seemed to consider it and admitted that she was a shy, reserved person. She said that shouldn’t matter because she’s spent the last three years working on this project daily. She stated that she knows that she can be the leader of the market. She stated that she wants to be the person who is ready to enter the big market. Mark said that he would make her an offer for $300,000 for 40% which was contingent on convincing the skeptical Barabara to go in on it with him.

After the commercial break, Mark continued. He stated that Mary Beth only has 24 seconds in which to convince Barbara to come in with her on it. Kevin gave Mary Beth some interesting advice – he told her to say “Listen you witch, if you don’t come into this deal I’m going to set you on fire with lighter fluid.” The Sharks all laughed, and they set the timer. Mary Beth looked determined. She stated that she did not have any business experience, but she was still able to build the business from the ground up. She said that she knows her firm in and out, and she works on it in between taking her kids to and from school. She stated that she was not willing to walk away from it until they become the top leader in the market. Barbara looked impressed. She glanced over at Mark and said that she was sold on Mary Beth’s passionate performance.

Mary Beth considered the deal in front of her as Kevin urged her not to do it. She admitted that 40% was high. Mark assured her that it would be worth it, but she stated that 40% is too high. Mary Beth told Mark that she was comfortable in her company’s valuation, and made a counter offer of 32%. Barbara and Mark discussed it and agreed. Mary Beth accepted the offer, and the three shook hands.

KaZAM Now In 2023 – The After Shark Tank Update

The deal with Mark and Barbara successfully closed after the episode aired. With their help, Mary was able to bring the company to the next level.

According to their update segment, which was included in episode 521, they made more than $1.5 million in sales within the first few months of the episode airing. Not only that but their bikes were featured in various publications including Sky Magazine. They were even recognized by the Oppenheim Toy Portfolio, from which they received the Mr. Dad Seal of Approval.

From there, they eventually got the bikes into Dicks Sporting Good stores, which significantly boosted their sales. They also landed a deal with Toys R Us, who agreed to sell the balance bikes at a number of different locations across the United States.

As of 2023, Kazam is still up and running. If anything, they’ve grown considerably over the past years with an annual revenue of $5 million. Nowadays, they offer seven types of bikes for young children, which ranges from 12” to 20”:

Kazam Bunni: Features a sturdy steel frame, padded grips and saddle, and foam lined wheels. Perfect for indoor and outdoor use. Available in teal, pink, and white. Retails for $59.99.

Kazam Swoop LTD Balance Bike: Perfect for those who are too big for a traditional balance bike. Features a deluxe saddle with backrest, rear brake, sturdy steel frame with folding functionality, and oversized air tires. Available in black and pink. Retails for $159.99.

In addition to their balance bikes, they also offer child bike seats, child trailer bikes, helmets, pads, and replacement parts. For those who are interested, you can visit Kazam’s official website here. They also have an official Facebook page that’s updated on a regular basis with the latest news.