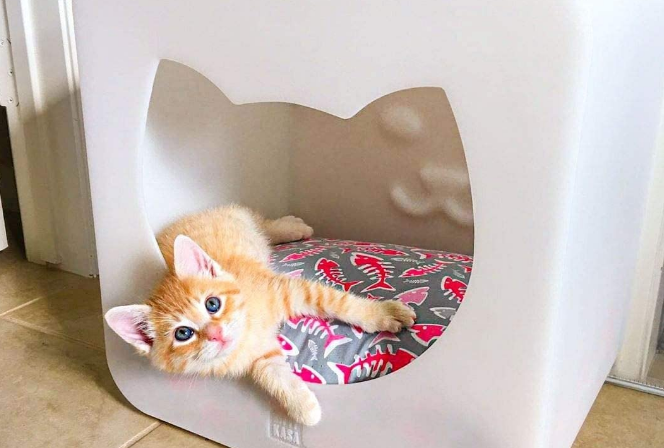 Ex-bikers Nikki Linn and her husband, Rusty Niedwick have always loved animals. For nearly 20 years, they’ve been running the ARNI Foundation, a non-profit no-kill shelter for cats and dogs. While running the shelter, they quickly realized that the cardboard boxes and carpet-covered scratch pads that they used for their felines weren’t enough. They would get destroyed, or worse, soiled, the latter of which would lead to various hygiene issues.

Rusty eventually came up with the idea of using plastic boxes. Not only are they durable, but they’re also much easier to clean.

In 2013, they fitted their shelter with milk-sized crates, and immediately, it caught the attention of other pet lovers. As one thing led to another, it turned into a business called Kitty Kasas. And it had its ups and downs. While it proved to be successful, its profit margins were slim. Their idea was also stolen by a European manufacturer, who tweaked the product just enough to avoid copyright infringement. 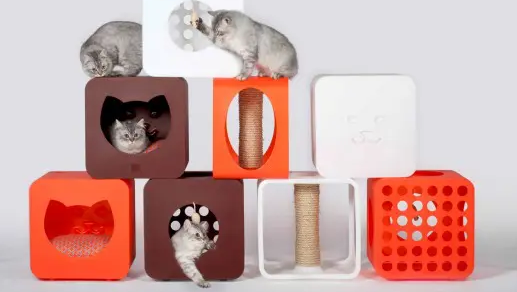 Wanting to get more out of the company so that they could save more animals, they decided to audition for Shark Tank. After standing in line for several hours in the California desert, they passed the audition with flying colors.

Nikki and Rusty ride into the tank on their motorcycle, surprising the Sharks. Taking off their helmets, they introduce themselves as the founders of Kitty Kasas and lets them know that they’re seeking $200,000 in exchange for 20% of their company.

They spend the next few minutes going over what Kitty Kasas is—that it’s a stackable, cube system for cats and that they can be used separately or put together. They also emphasize that they’re durable and come in many different colors and patterns and as they do, the camera zooms in on the display beside them. 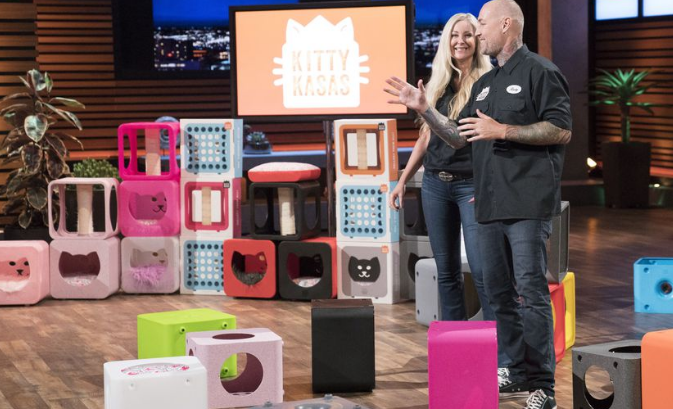 Right away, Kevin asks about their sales. Rusty reveals that they’ve sold $600,000 worth over a year and a half, which seems to impress him and the other Sharks. Continuing, he explains that they’d had a hiccup during their second year when they partnered with a plastics company, which didn’t result in many sales.

Asked about their sales from the last quarter, Rusty tells them that they’ve done $200,000 over the past three months. With that, guest Shark, Sara Blakely asks how they got into the business. Nikki tells them that they run a non-profit animal shelter and that they’d come up with the idea after realizing that there was nothing in the market like this. She explains that the cubes were initially made for themselves but that they had decided to turn it into a business after adopters showed interest in the products.

Rusty explains that they’re much easier to clean compared to what they were using before and that they can just take them outside and use bleach or a power washer.

Lori seems interested in the cubes as a fellow cat lover, which excites the couple. Kevin then asks how the manufacturing costs. Rusty tells him that they have three different prices—that the ‘bedroom’ costs $10, the one with a scratchy post costs $11, and the top bed costs $5—and that they sell them for $39, $49, and $22.99 respectively. 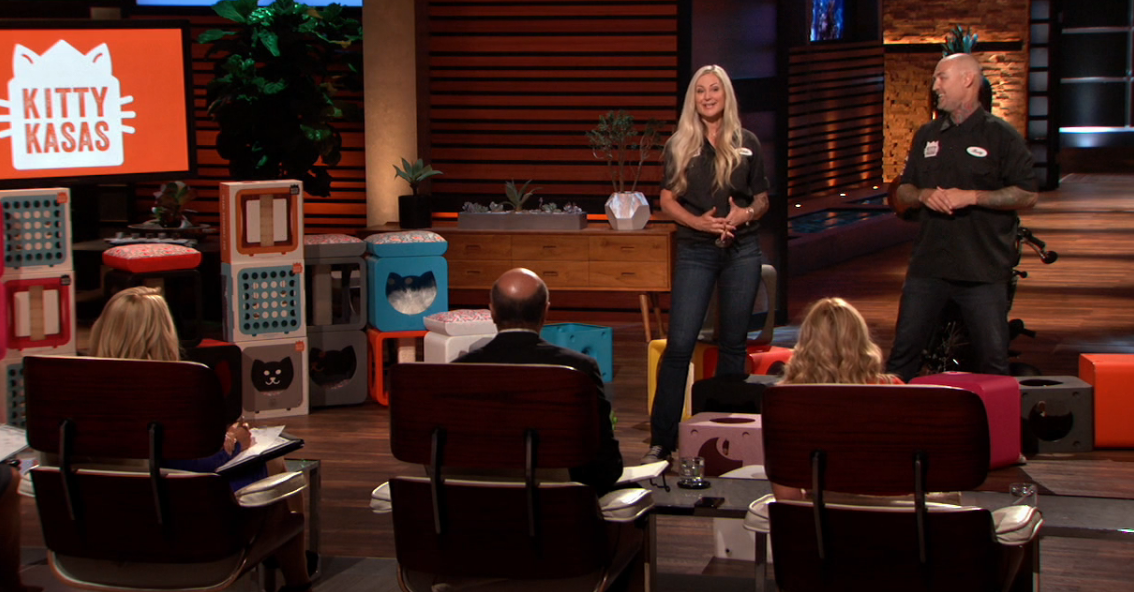 Barbara then asks about the hiccup that they had during their second year. Rusty explains that they had taken their cubes to a design show in Germany and that they were approached by a very large plastics company, who offered to turn their products into an injection mold for a price. In exchange for purchasing these injection mold cubes, they would offer them their distribution network as well as a royalty for European sales.

Continuing with the story, Nikki explains that the company ended up stringing them along for a year, stealing their intellectual property in the process, which left them with nothing. Rusty adds that they’ve since redesigned their cubes and have created their own injection molds.

Asked by Kevin whether or not they have a patent for the product, Rusty answers yes but that they’d chosen not to go for cease and desist as it just wasn’t worth it for them to pursue a $2 billion plastics company.

Sara is impressed by how passionate they are for cats but admits she doesn’t know much about them as she’s allergic to the animals herself and for that reason, she drops out.

Kevin goes on to talk about their slim margins, which he’s not a fan of. He also doesn’t like the fact that the products take up a lot of floor space but is willing to make them an offer—$200,000 for a 33.3% stake in the company and that he’ll also help them ‘blow them up direct to consumer’.

As they contemplate his offer, Lori asks whether or not the products can collapse for shipping. They tell her yes and proceed to give her a demonstration. They also go over the shipping prices, which is usually between $6 to $7.

Kevin teases Lori about what she’s doing and she states that she’s asking questions. Around the same time, Barbara drops out, stating that ‘she hates cats’ and that ‘they aren’t for her’.

Right afterward, Lori tells them that she will be making them an offer, which noticeably excites Rusty and Nikki. As she’s rearranging her notes, Mark states that while his brother loves cats, he himself is not a fan of the cat and pet business and for that reason, he will also be dropping out.

After more teasing from Kevin, Lori reveals her offer, which happens to be the exact same as Mr. Wonderful’s—$200,000 for a 33.3% stake. Rusty asks whether or not she’s willing to do it for 25% but Lori refuses, stating that she’d like to be an equal partner. 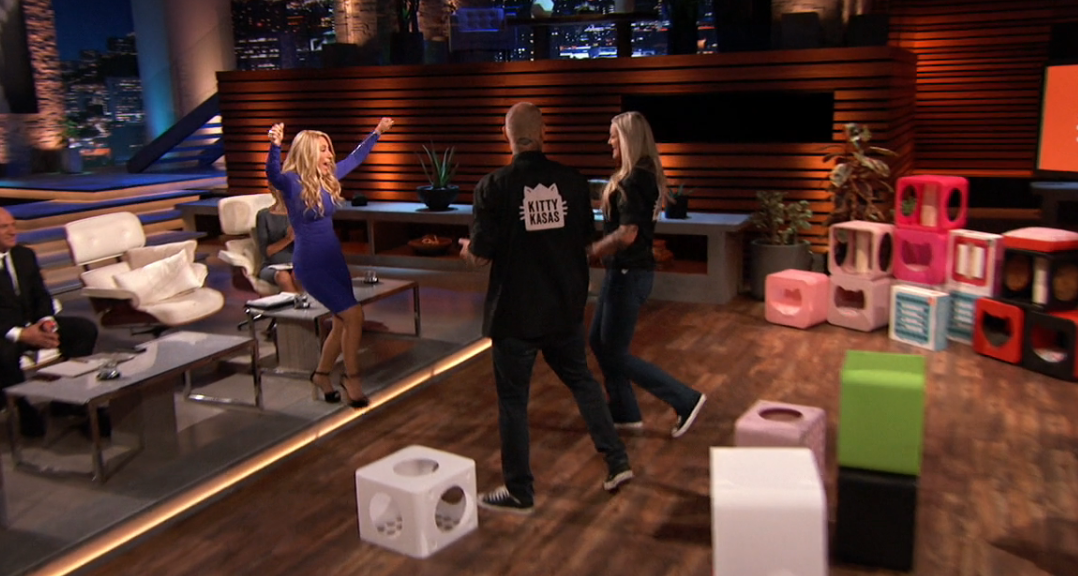 Nikki then makes another counteroffer—$200,000 for a 30% stake in the company. Lori thinks about it for a second before agreeing, which sends the couple cheering and clapping. With that, Lori steps forward to give each of them a hug. They then thank her again before stepping out of the tank.

Kitty Kasas 2023 Update – Where Are They After Shark Tank?

Unfortunately, it doesn’t look like the deal with Lori was ever finalized as it’s not listed in her Shark Tank profile. Regardless, Nikki and Rusty were able to amp up their presence. Not only did they sell their products on Amazon, but they also landed a contract with Petco.

They also launched a new product called the Siesta. Unlike their previous cat homes, which are shaped like a cube, the Siesta is shaped like a teardrop and can be hung from a chain or rope from the ceiling; it can also be used both indoors and outdoors. Available in various colors, it goes for $149 on their official website.

As of 2023, however, Nikki and Rusty are no longer the owners of Kitty Kasas. A few months after appearing on Shark Tank, the company was acquired by Jolly Pets, a pet toy manufacturer that’s based in Streetsboro, Ohio, for an undisclosed amount. Perhaps they decided to sell the business after their deal with Lori fell through?

One thing’s for sure, though—the cat homes that they’d come up with are just as popular as ever. They’ve also added a line of plush cat beds, which are available in various colors and designs. That’s not all, they also offer accessories such as the ‘Kitty Kasa Penthaus’ and wall mount, both of which are compatible with their cube beds.

For those who are interested in their products, you can visit their official website here. They offer free economy shipping across the United States for all orders over $75.